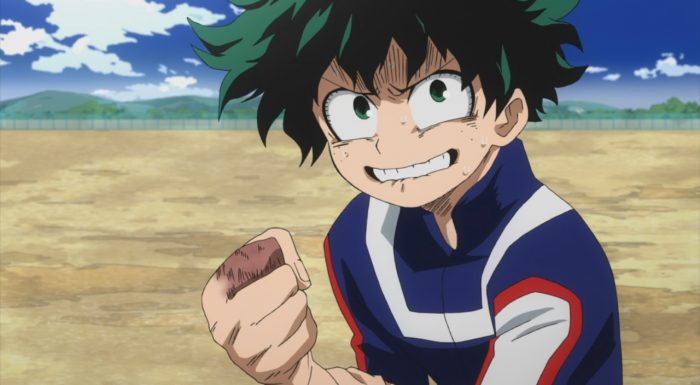 This show has a lot of the standard moments that you’d expect, but it does an excellent job of hitting those marks. An episode about the first day of school and the insane test from the intimidating teacher who might expel anyone if they don’t do well enough. There are a lot of examples of this kind of first test. The most obvious one would be from the very start of Naruto. The teacher scaring everyone and threatening to expel them if they fail. Sure, it’s pretty standard but at least they do it effectively. Aizawa is a good example of that. Someone who makes some good points and pushes the students pretty hard. Plus his setup isn’t even all that big a deal when you step back. The students have quirks and should at the very least not be the worst in every single possible test. There will be some variance. The only one really in danger was Deku who was in a position where he basically couldn’t use his quirk without risking breaking limbs again. It was hard to make an impression like that. 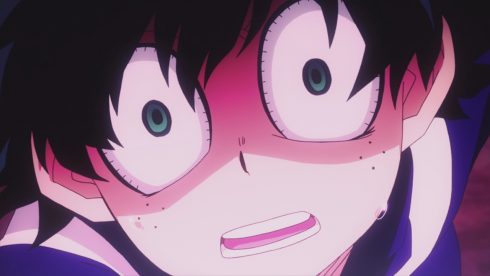 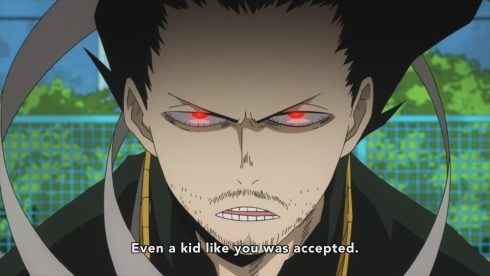 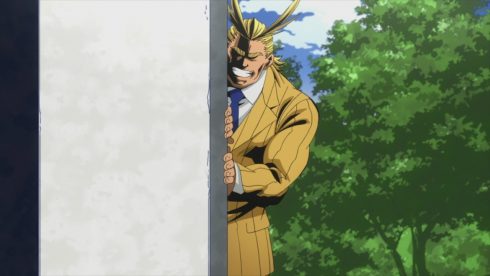 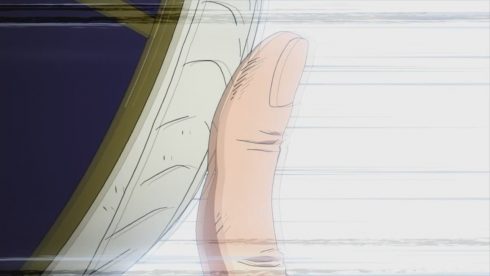 The intimidating stare down between Aizawa and Deku was good. It wasn’t just scaring the guy to death, but fair points made. Deku can’t afford to get into the mind-set that it’s fine to just bust his arm. If he does something like that it is other who will have to save him. That was the case with Ochaco. He did save her, but in the end was in such a horrible position that she had to go out and save him afterwards. Not good if a hero can only save one person and then requires rescue from his colleagues. Of course at the same time Aizawa didn’t actually have any faith in Deku to figure out a solution. He figured it would end either with him destroying himself or giving up and not using his power. Though not sure what he means by no potential. All he has to do is get a full grasp of the power and master it. That’s something he can definitely do in time. Thus…potential.

Oh well, it still lead to a great moment when he just shocked everyone with that throw. Deku thought and found the best way to use his full strength with the least amount of damage. I mean it had to hurt like hell to break his finger like that, but it was damage that he could still function with. Plus if you want to look at it in an agonizing way….this current idea gives him a lot of options. 8 finger flicks and then his thumbs. He’d have horribly broken fingers, but he does have a lot more than the 2 shots available if he was just using punches or the 4 shots with punches and kicks that would leave him unable to move.

Obviously I look forward to Deku mastering All for One to the level that he can punch and kick without serious recoil. It is fun to watch this guy overcome and have to pay a price to use his power, but eventually he has to and will master it. He is the successor for All for One, he’ll be able to use it like All Might eventually. 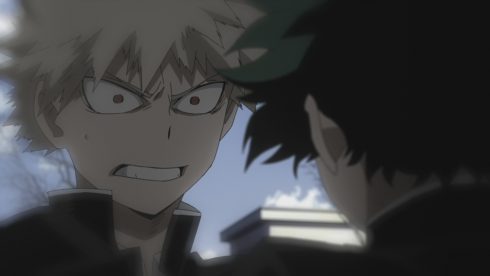 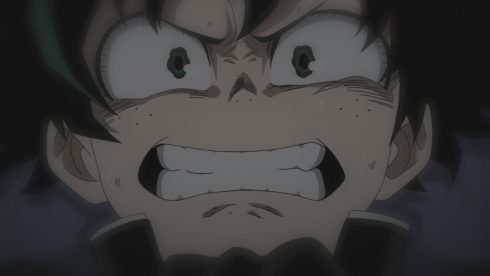 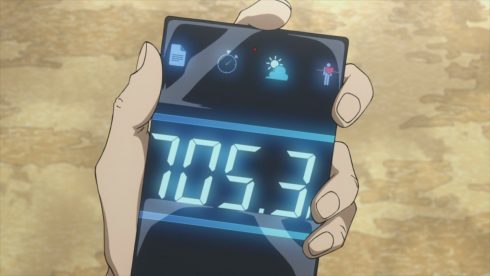 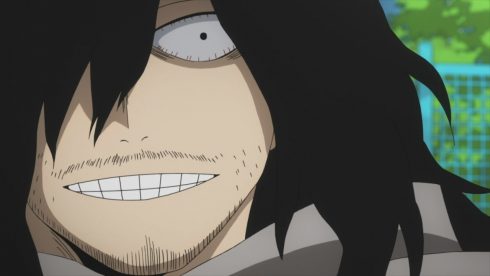 Another fun point was the distance. 705.3 meters. Which is an insane distance to be sure. But all the more so when you consider that Bakugo’s throw was 705.2 meters XD. The realization that Deku actually beat him in something should without a doubt create some insane reactions from Bakugo. All the more so since that was just with a single finger. If Deku had enough control to use his arm without destroying it he probably hits a much better score than just that.

A big thing this episode was Bakugo not realizing Deku’s situation and being frustrated that Deku stood up to him and entered this school. He took the test and finished at the top so not sure how he thought Deku cheated or magically got in. Clearly didn’t ask anyone or look into it hard enough. This was his first look at it and realizing that Deku now has a quirk. He shouldn’t be able to figure out the truth, but just be shocked. Even if he makes a vocal note of Deku not having a quirk until now, he’ll only stand out more. Being seen as this very late bloomer who gained an incredible quirk. 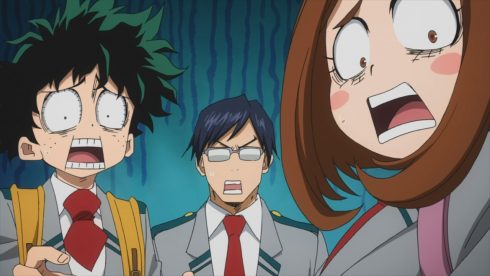 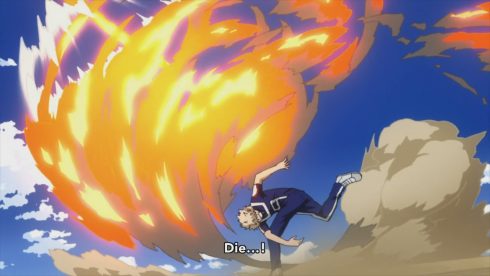 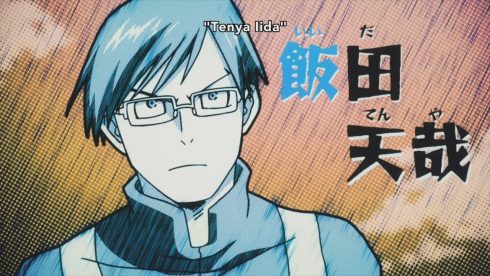 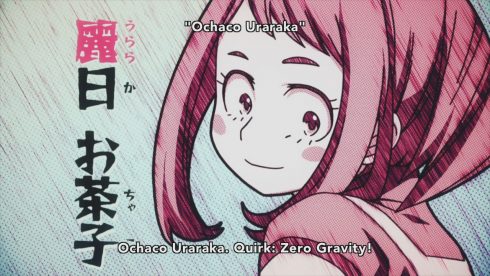 A good first day for Deku. He got to….well have Ochaco chat at him, still too nervous to actually speak to her. Luckily she’s such a bubbly personality that she doesn’t even notice that he’s struggling to say anything at all. She also serves as the normal point of view and source of dislike about the testing structure. Though certainly Aizawa makes some good points. These kids have to become heroes in 3 years, they’ve got to be pushed hard. Though I doubt this test would have actually expelled anyone. It serves as a good motivator.

This was a good start to the school term and one where we got to meet a lot of new faces. It was a good occasion to learn the various quirks and characters. More of which will likely be revealed and focused on as time allows. Also a good point made by All Might in his early monologues. The torch has been passed. It’s now just a matter of time. Deku will slowly grow and strengthen while All Might will go to the other direction. A kind of sad thing, but he has been doing so much despite his body being brutally destroyed by injury. It’s time for someone to take on that mantle. Looking forward to next week.