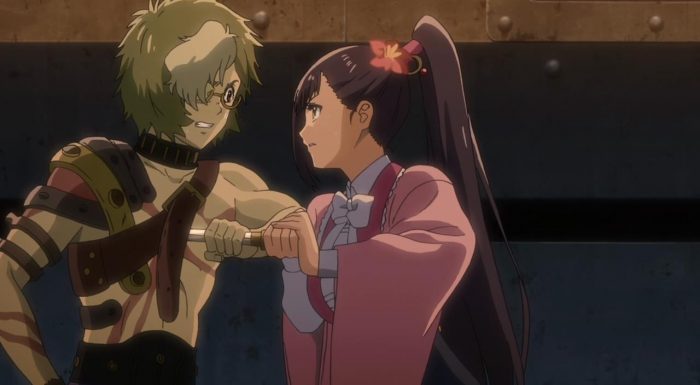 Koutetsujou no Kabaneri is a bit of a shameless show isn’t it? It’ll take established tropes, cliches and ideas from wherever it can, and use them to its own ends. Thankfully, however, those ends revolve around captivating and entertaining the audience rather than something more sinister or annoying. And while the show is still kind of stuck in the “fun” but not “great” category, its still doing well for itself three episodes in.

There’s a lot to unpack in this episode, but lets start with the reveal at the very end. So Kabaneri are basically vampires? Yeah seems like it. I’m not entirely sure how something in between a zombie and a human is suddenly a vampire, but in this show’s universe and fiction, Kabaneri have bodies that are fast healing, super strong and almost indestructible, except for the fact that they hunger for blood. I’m honestly not sure how to take this last minute twist, because it definitely feels like it comes out of nowhere. 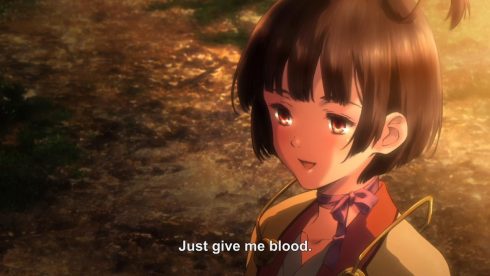 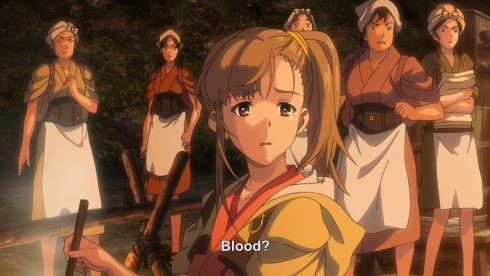 It makes sense, I guess, and I see the narrative implications of it, i.e that Ikoma and Mumei aren’t quite as safe to be around as everyone originally thought, but the idea does feel like a bit of a stop gap, rather than a clever solution. Ikoma and Mumei are/were too powerful, and the upsides to being a Kabaneri seemed too plentiful, so the whole vampire angle is thrown in to balance the scales. Now Ikoma and Mumei have a very real problem on their hands, and perhaps more so Ikoma, if only because the poor guy had no idea that this whole blood lust thing was coming.

I think there’s a touch of irony in how Ikoma, the thing and person that Ayame was starting to believe in, ends up being the one who’s literally going to come back to bite her. For all the brave moves that Ayame makes in this episode, I couldn’t help but feel a stronge sense of naivety in her actions. More than anything else, I think the girl was just not being cautious enough, and while I don’t particularly like Kurusu’s brand of “screw everything Kabane related”, I do think that Ayame should’ve been more guarded and careful around Ikoma. 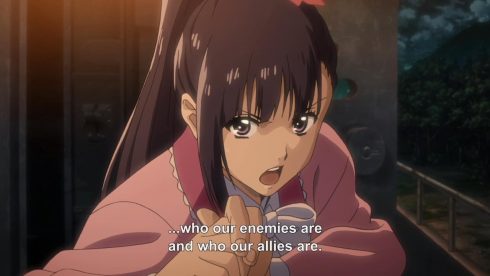 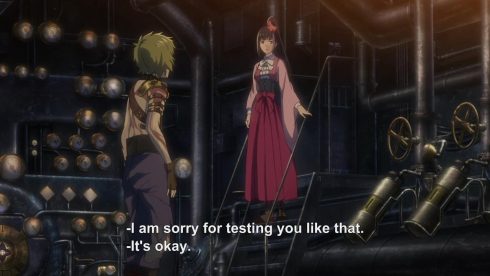 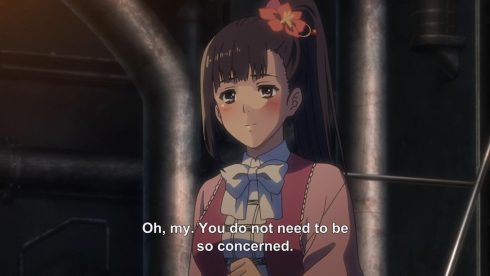 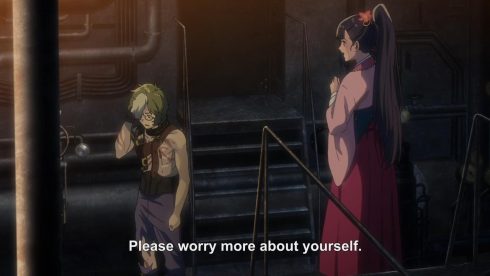 And yes, I’ll eat some of my comments from last week, and say that Ayame isn’t all that bad of a character now. I didn’t really see what her character arc was going to be, or how she’d add to the story, but I’m getting a pretty strong sense of all of that now. I’m pretty sure that Ayame’s whole story is going to be one of maturation, or a sort of loss of innocence. Ayame’s a pretty sheltered and simplistic if well meaning girl, and she tackles everything in shades of black and white. Of course, in a world where there’s zombies half zombie human vampires, well, there’s a more nuanced approach needed. And I think, Ikoma taking her blood, is going to be a hard lesson for her.

I can also see how this whole situation could devolve into that “forbidden, needy” relationship between her and Ikoma. Ayame, in this episode in particular, definitely seemed to have a thing for our main lead, and its not hard to see why. I’ll admit that there’s some chemistry between the two, even if I find the MoumeixIkoma pairing to be a lot more interesting. But before we get to those two, I do want to address a concern regarding where this could go. If Ayame becomes Ikoma’s secret blood donor, then well, things are definitely going to fall into a cliche territory. Plus there’s almost an undertone of sexual assault to the whole situation she’s in, wherein she left herself alone with Ikoma, and the guy couldn’t “control” himself. Yes, I know its not exactly the same thing, but the way the scenario was setup and built up, plays into that whole idea, or at least it felt like it to me. 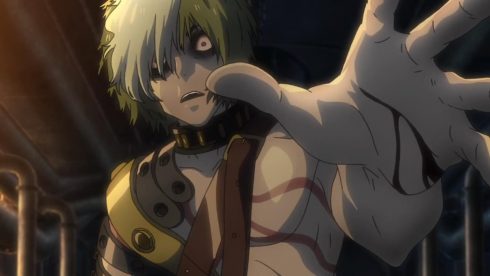 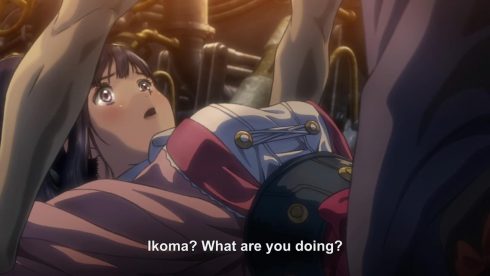 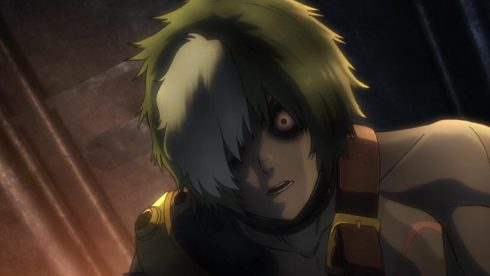 How the show chooses to follow up the cliffhanger, will be key. Does Ayame start to distance herself from Ikoma? Does he manage to stop in time? Or does he actually bite her? And how does she react to it if he does? All those questions are going to be paramount in determining whether Koutetsoujou no Kabaneri does something interesting with this tried and true concept that its setup, or if it just uses the trope to add flavor to an already complex mishmash of ideas.

Now since I mentioned it, its worth talking about Mumei in this episode. Mumei continues to be the most interesting character in the cast for me, if only because she’s thoroughly unpredictable at the moment. There’s a genuine sense of connection between her and Ikoma, and i actually like the growing bond and empathy that is growing between the two. More so than anything else, it seems like Ikoma, being the engima and oddity that he is, continues to be quite enthralling to Mumei herself. 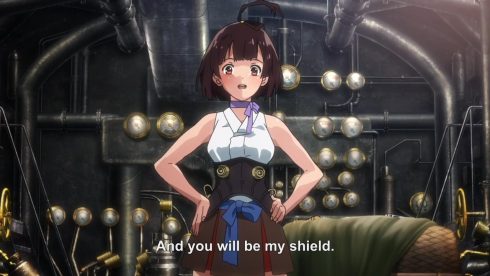 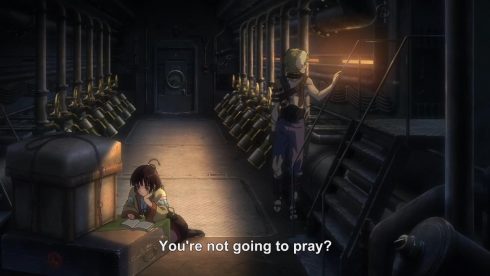 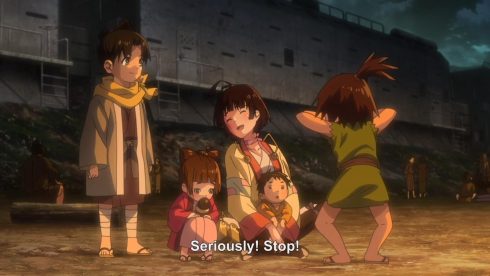 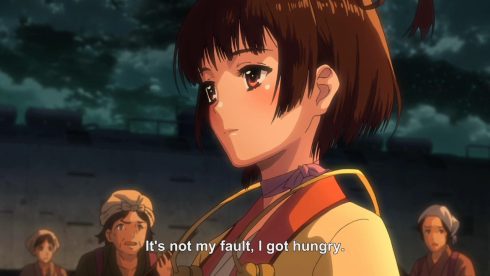 But beyond just training Ikoma this week, I like how whimsical Mumei really was, and how much of a loose canon she is. She’s got an air of confidence and a “my way or the highway” attitude, that seems to get in the way of a easier approach to dealing with people. Even more interesting is the range of stuff we see from her this week, as she oscillates between someone who’s generally protecting those around her, to the most awkward and almost scary individual of them all.

One moment she’ll be playing with kids and making them laugh, and the next minute she’ll be asking for blood. Its an interesting choice, to have Mumei act so off, weird at times, and still have a playful, mischievous side to her. But I think the thing that makes Mumei shine, at least for me, is how a lot of her playful, teasing exterior is more of a facade than anything. Mumei’s got a darkness in her as well, and unlike Ikoma and even Ayame who wear their hearts on their sleeves, she’s a lot more reserved in regards to her true demons. 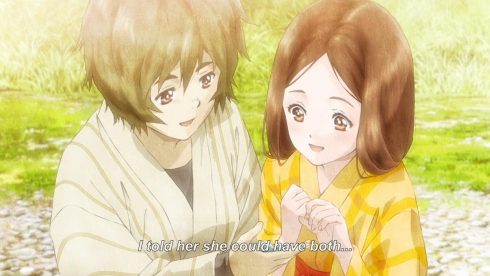 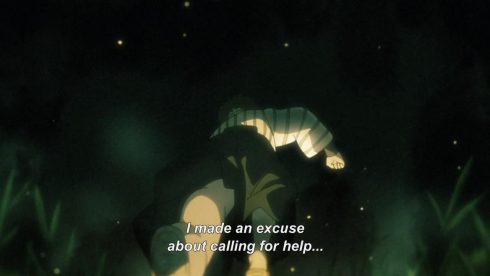 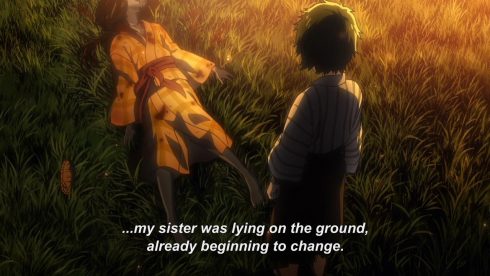 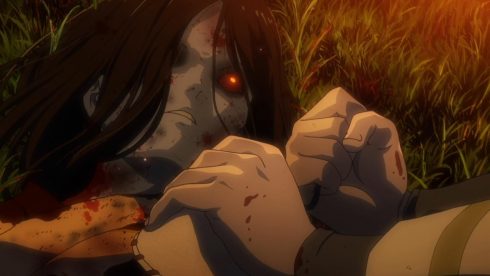 Speaking of Demons, Ikoma’s backstory was one of the home runs this week for the show. While its nothing too original, I’ll always appreciate a good backstory that provides reasonable context into how a character is. Ikoma’s past of leaving his sister behind to die at the hands of a Kabane is tragic, but it gives a good explanation for why the guy is so driven to stop the Kabaneri. The fact that he had to kill his own sister, and that he couldn’t save her then, leads to why he desires a cure for the Kabane rather than outright revenge. Plus, what’s so refreshing about Ikoma is how he approaches his life after his childhood trauma, and tackles it in a positive way rather than how some other leads in other stories have done.

Between Ikoma’s past, Mumei’s weird situation, and Ayame trying to keep the masses off their two saviors, there’s even a story about a woman who’s pregnant with a child. The bitten woman who’s pregnant is a really overused trope in zombie stories, and one that’s cheap and manipulative no matter where you use it. The fact that Kotetsujo no Kabanari uses it this week for pure shock value rather than anything else, is pretty sad, and a general misstep for the series IMO. Its that shameless nature of the series though, it really will use anything and everything in the book that it can. 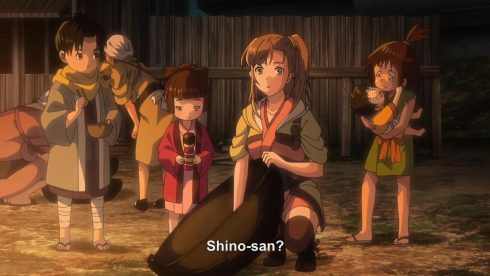 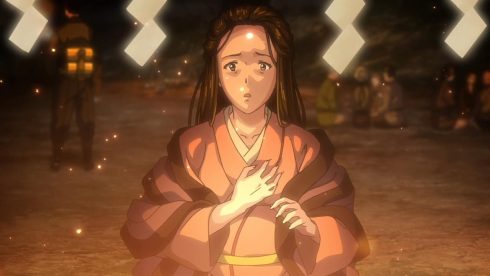 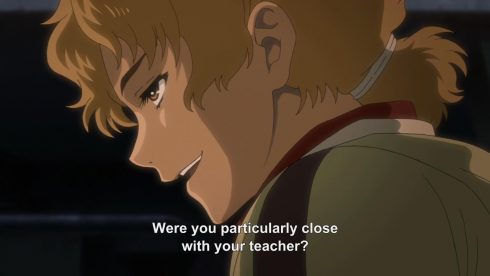 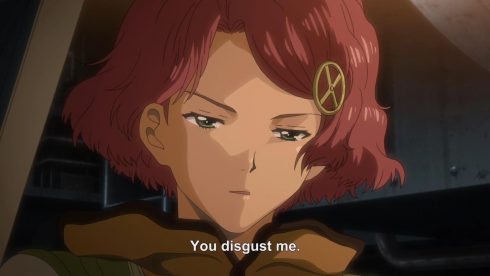 Beyond all of that, we have little moments for our supporting character thrown in for good measure. We have little moments for the train driving girl with the pink hair, we’ve got some sarcastic dude with brown hair who seems to like acting like a tool, and we’ve also got Ikoma’s bro Takumi, who’s learning to use a gun. And of course, then there’s Kurusu… Kurusu, who is still an unlikable jerk, and not one that I like seeing, even if his screen-time is minimized this week. The thing is, I think while I dislike the guy immensly, it is probably the intended effect. You’re not supposed to like Kurusu, I’m sure. He’s a small minded individual who can’t think outside of his preconceived notions and prejudices, and he’s the sort of character that makes everyone else look great by comparison.

So, with this week’s episode, we’re at a really interesting moment. The train (Kotetsujo as they call it) is at a stop for repairs and to mourn the dead, and as people slow down, they get antsy. While Ayame does her best to keep everyone and everything together, she herself ends up backing herself into a rather dangerous situation. It all comes back to her and Ikoma, and how the whole blood situation goes down. Mumei, having taken out a Kabane Pregnant mother, will have her own perception issues next week.  If nothing else, despite the reliance on cliche tropes and overused ideas, Kotetsujo no Kabaneri is at least sowing the seeds for interesting character drama. 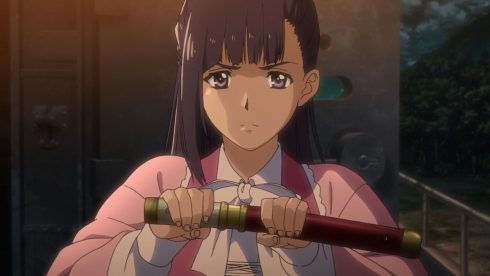 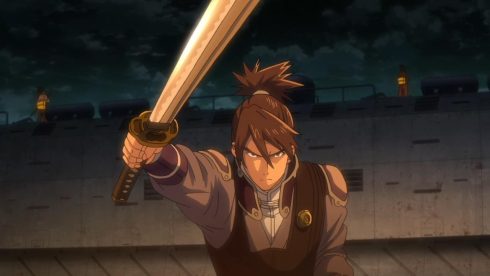 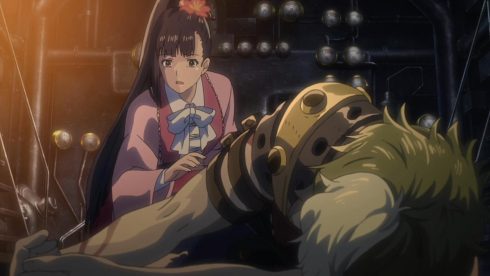 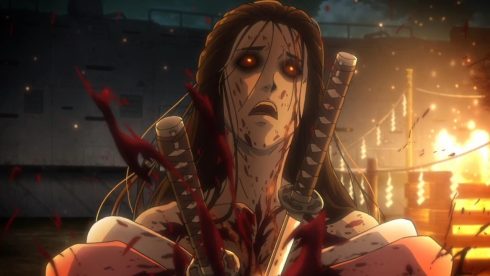 And while at the moment I don’t expect the show to blow me away and truly surprise me, I can’t say I didn’t like or thoroughly enjoy this week’s episode. For all the sins that the show commits, it does it in the name of being entertaining, and while I can’t outright praise it, I do appreciate everything it does. Plus its taken steps to add nuance and depth to some of its primary characters, so that’s definitely a huge win. The burning question for me is whether Kotetsujo no Kabaneri is going to tap into its latent potential, and do something really mind blowing and interesting. I suppose that’s one of the reasons why we all keep watching, isn’t it?