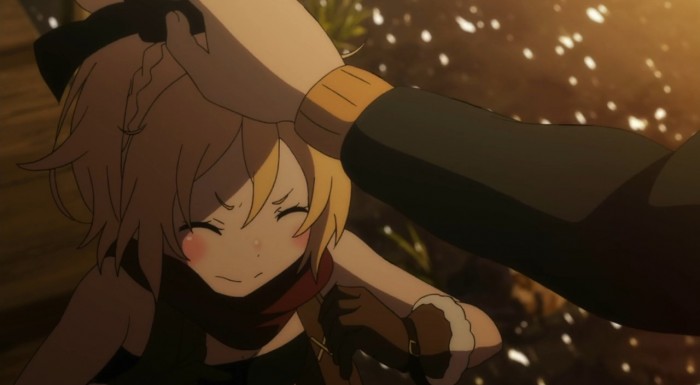 Life just isn’t easy and sometimes is more fragile than you’d believe. This was another strong episode for Re:Zero as Subaru just tries to both understand his situation and also how he can tackle the mess he is in. I had to appreciate that for a time he did have to stop and ask himself if he even wanted to get involved. Because frankly I wouldn’t blame him if he chose otherwise. It’s crazy to ask someone to risk and experience death over and over to save people who don’t know him. He may know “Satella” or Felt, or old man Rom, but they don’t know Subaru after he resets. What obligation does he have to people who technically haven’t done anything for or with him yet? I don’t think it’s such a simple thing.

In the end Subaru makes his choice, because he’s a good guy. He had no obligation, but he does have his own memories. Even if they don’t remember him, he remembers them. Just ignoring the fact that they were killed or that they might be killed isn’t something he can do right now. Maybe he reaches another dark point where he has to debate the worthiness of it, but for now he can move ahead. He’s made the tough decision in order to try and save those around him. 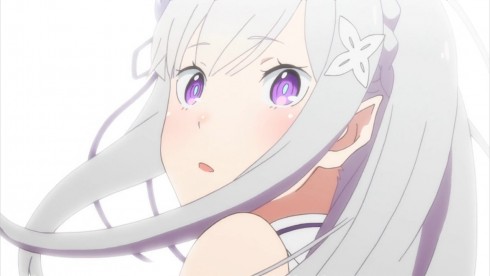 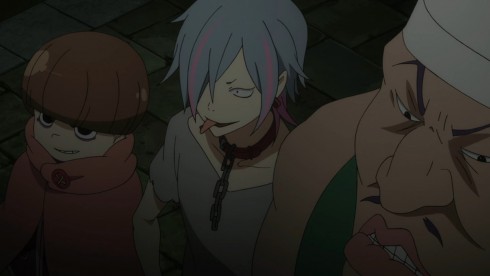 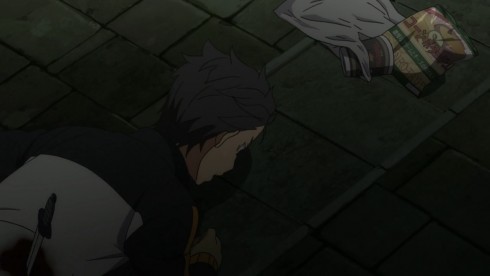 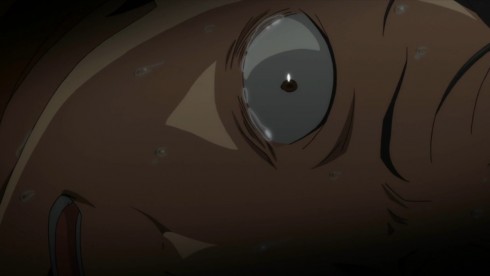 And yeah it did take another death for everything to fall into place. Though that death was a somewhat “holy crap” in how quick and simple it was. It shows that life is honestly something that fragile. After meeting them this many times, Subaru just took it lightly. But these are criminals, even if they aren’t super killers….they are dangerous. If you take things lightly then they can turn into a disaster which happened here. In a sense this was the kind of death he needed though. Pretty quickly after the last revival and unfortunately slow enough for him to process the event. It wasn’t as shocking or terrifying as with Elsa, but just kind of just bleeding out.

Certainly this is a kind of crappy time leap ability. Having to experience death in order to go back. Not when things are dangerous, not when he wills it, not when someone else needs saving….he has to die. “Return by Death” indeed. Of course it’s better than having no power at all or else he’d have been done last week. He has a chance to get involved here. 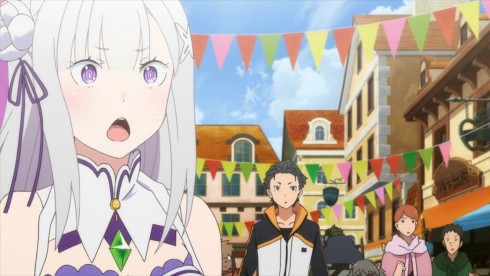 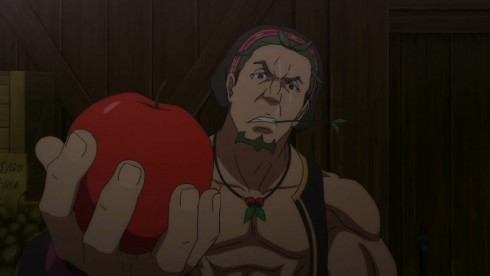 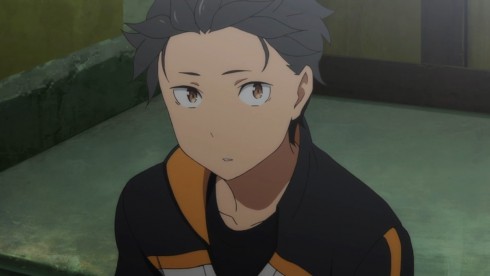 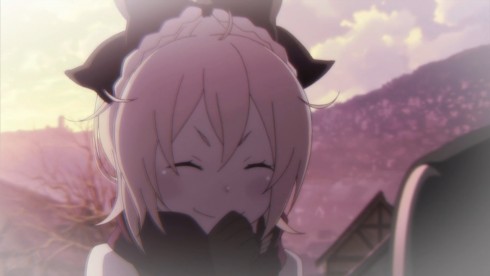 I’m honestly fine with how long it took him to process this. Death is darn traumatic. People push things aside they don’t want to deal with, or things they don’t want to see all the time. Being murdered is something many would like to look the other way with. If he can come up with a plausible solution then all the better. This last time there was barely any time to process it. He passed out almost immediately and then had that run in with Satella. Just trying to chase her down before getting killed. This last time he had time to check things, sit down and think. And he took a long time to think about it as shown by Satella’s robbery being done and even the girl finding the lost kid during that time.

The voice thing from the first episode was fine. Witness testimony is actually horribly inaccurate most of the time. And that’s visual confirmation. With the shock of being cut open, Satella being killed, and bleeding out fast….he probably never really processed that voice or maybe even heard it clearly. People can’t so easily step back and look at things from an objective lens. Subaru was stuck in his own point of view and dealing with probably subconscious trauma from the previous deaths. In that sense I wonder how well he’ll hold up going forward. 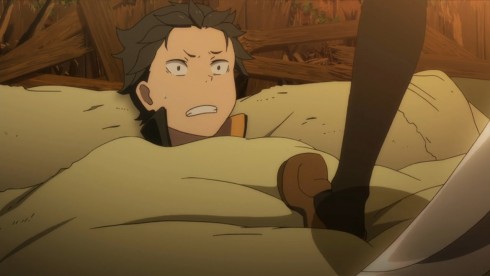 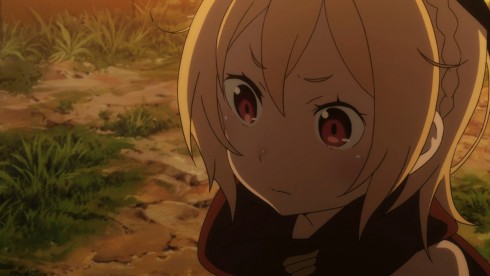 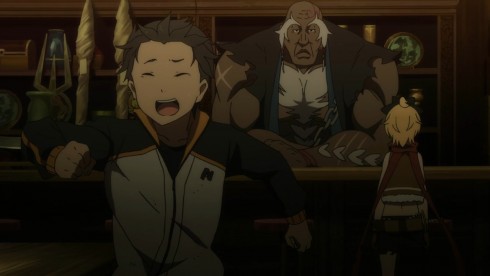 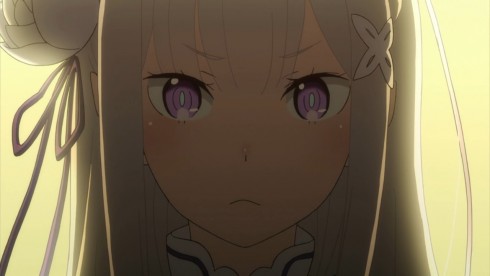 So this whole current ‘life’ for Subaru has been kind of tricky. He’s made some plans and efforts, but I’m not sure how well it will go. I don’t blame Subaru for wanting to avoid a conflict with Elsa. That woman is terrifying. Trying to resolve this quickly and quietly is understandable. Of course his plan has some flaws, but when in a panic and not having a lot of time it is easy to make some errors. First, the issue is getting the deal done fast. Felt is a girl eager to get out of her current situation. This can make her a bit greedy. That isn’t a huge issue since if she wasn’t a bit greedy then she’d stay to the original contract and sell to Elsa. But, it’s also hard to get her to sell before meeting Elsa. Subaru knows his phone is worth more money, but….it’s hard to convince Felt that since Elsa didn’t hammer out the exact figure ahead of time. Hard for Subaru to prove something he ‘knows’ but only knows from a past life.

The other issue is what happened at the end. “Satella” is a wild card. Her showing up at the end could make everything go to hell. Subaru doesn’t have trust built up with basically anyone right now. Maybe Rom since he’s a pretty good guy, but Felt is hesitant and who knows how Satella will react to all this. She could count Subaru among the thieves and attack all of them before he can calm the situation down. It does no good if they kill each other before Elsa even gets there. I really wonder if Subaru can get it done on this attempt. Felt has lived such a hard life that she doesn’t trust anyone. Getting through to her and the rest and getting them all out before Elsa shows up….god that seems tough. 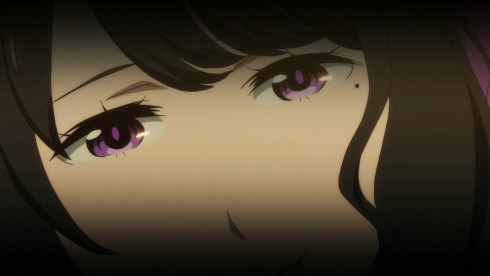 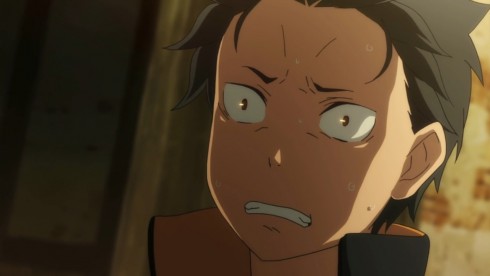 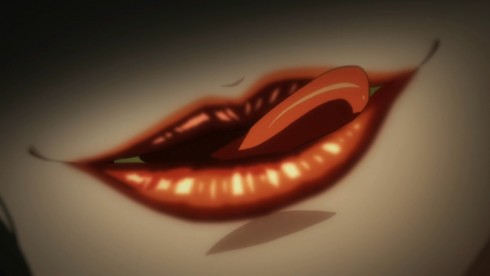 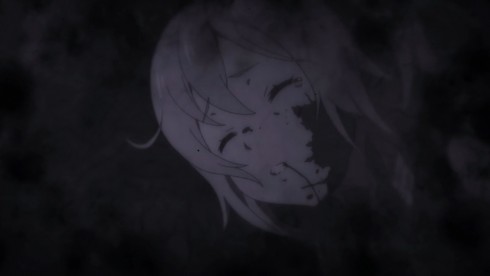 But damn that encounter with Elsa….I wasn’t even in Subaru’s shoes and I was nervous as hell. I’m pretty sure in his position I would have run away screaming and hoping I wouldn’t be killed for being a bother….That’s just freaking terrifying. Props to Subaru for even remotely retaining some calm. Showing fear frankly is a minor thing when face to face with someone who brutally murdered you….twice! Subaru is just a normal person with an unusual ability. He still feels fear. Had to be an odd situation for Elsa running into someone that terrified of her on sight. She’s pretty good at keeping a demeanor of someone you wouldn’t expect to be a crazed killer.

Still credit to Subaru for having not just fear there, but anger. It’s easy to be overwhelmed by the fear, but he still retained the anger towards this person for what she has done (in another time). He’s scared to death by her, but he’s not swallowed by it. Doesn’t really help him that much, but just being scared would leave him unable to act.

Close call at Felt’s place. Understandable that she’d react poorly to someone in this slum looking through her stuff. I was worried she might actually kill Subaru this time. But maybe they don’t want a future ally killing Subaru in any route. Might make things awkward. 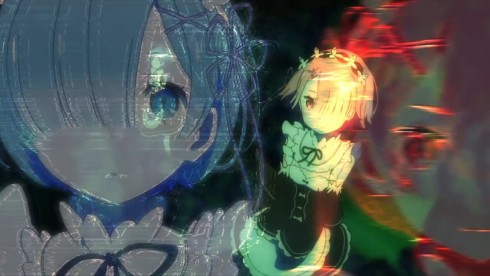 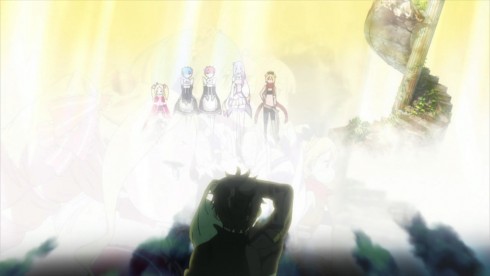 I thought that was a pretty good OP. I like how utterly unstable it is at times. Because really Subaru’s whole existence is pretty unstable. Dying, going back in time, struggling, rebuilding relationships…it’s tough. See him at points wandering around, split up in various versions of himself, struggling like mad to reach the shining and clear image ahead of him. Just trying to reach those he wants to save, by giving everything he can. But it’s a brutal struggle. He’s fighting so hard and is taking all kinds of beatings and deaths in order for it to work out.

The song worked pretty well for that. A nice energy song that sounded pretty nice. It built up well for the more energized portions of the OP and I wouldn’t mind listening to that week in and out. 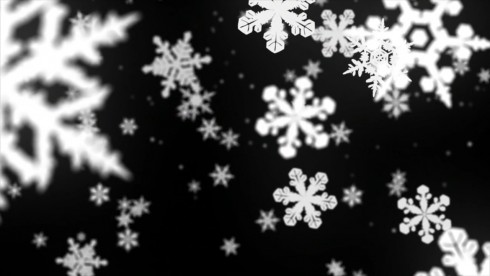 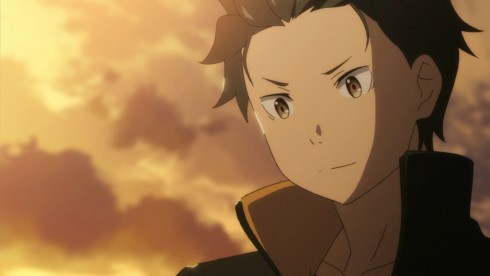 The ED had a nice song…..it did have a good song in all honesty. Though the downside is that the ED is basically just snowflakes falling for the entirety of it. Not exactly the most exciting ED of all time. I suppose you could argue the ED works with the idea of each snowflake being distinct and unique like people are. Subaru is trying to save those special snowflakes with everything he has. Or maybe it’s just a silly visual XD. Either way I did enjoy the song. Just felt like a good fit for the tone of the show. 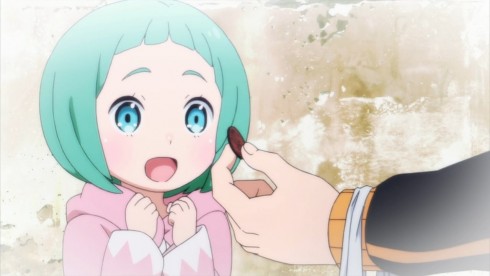 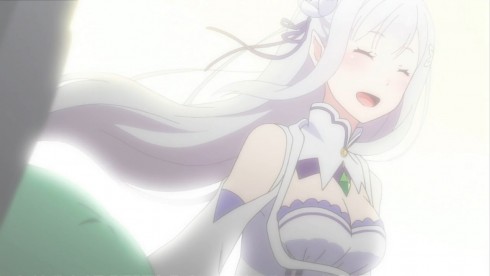 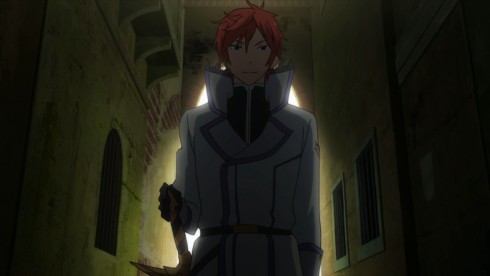 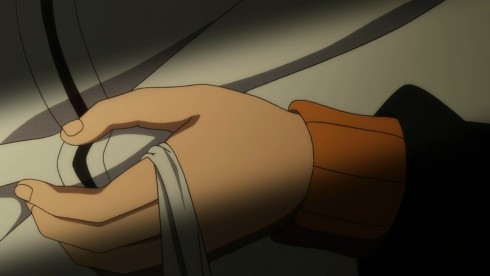 This was a good follow-up to last week. Sure, I’d love more hour long episodes but such is how it goes. They did move the plot forward and Subaru is off to the races. It’s just a tough road ahead for him. He wants to do the right thing here, but the difficulty is making it happen. He has to keep learning and figure out where he went wrong before so he can fully avoid them next time. Frankly I think Subaru would like to make it to the next day without dying.

This will be a long journey, but I’m on board with seeing how this all turns out.