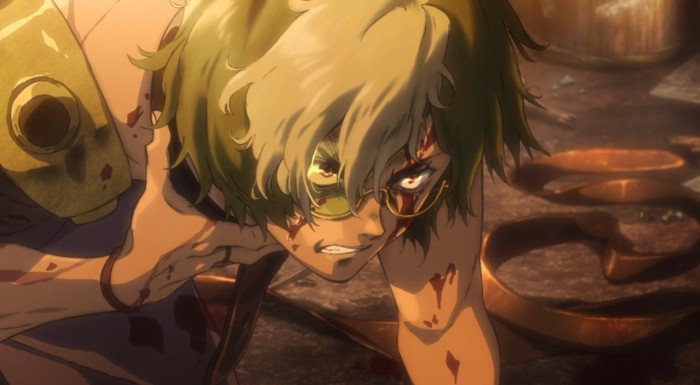 This is very much the kind of original series I’d expect from the Attack on Titan’s team. Just replace Titans with Zombies and you are basically at this show. Just replacing a singular city for humanity with several ‘stations’ that heavily armored trains pass between. Although the irony is that it appears that the giant titans being held off by a really big wall is a less immediate threat than just the zombies. I mean the people in this world seem doomed.

A pretty solid first episode. The show looks great and sets up the world fairly well. We have a good idea of how these people are living and basically why they are in such dire straits. It’s interesting having humanity’s fear taking a lot of the heat and not just the zombies (I mean the “Kabane”). We can just call them zombies though, that’s what we are dealing with here. It’s probably on point since we’ve seen “Shikabane” be used for the word corpse in other shows. But, we’re just dealing with zombies so let’s keep the focus there. 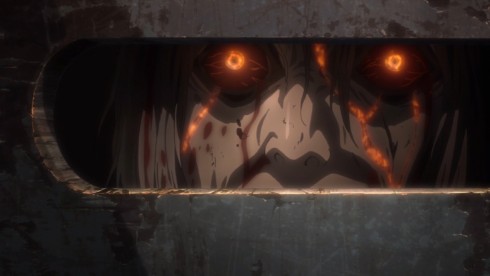 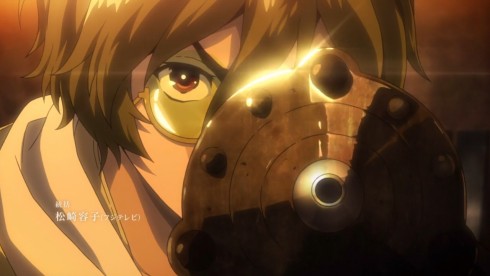 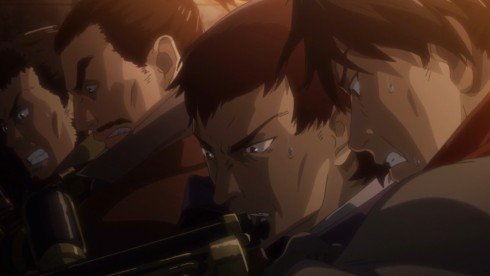 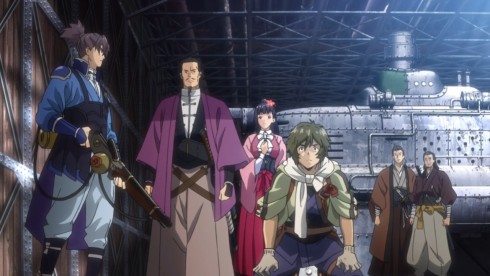 In the end the big issue in this world is the people. They’ve gotten so incredibly fearful, but haven’t channeled it into anything positive. Being afraid isn’t a horrible thing. Fear is pretty helpful in a lot of ways. But if you just use it to abuse authority and kill people who might be infected…it’s just a waste of time. Just look at this Bushi society. These guys have all sort of authority, but what are they using it for? Basically just making a caste system. Their weapons aren’t good enough. But is anyone except a random worker doing anything about it? Apparently not. They know that better weapons are needed, but their only apparent innovation is making sure that people who might be infected can kill themselves quickly…Very helpful. What is the point of those guns other than shooting other humans who aren’t zombies yet?

Although to be fair this episode also shows that maybe they don’t need to bother with better guns. Look at Mumei. She just cut a freaking zombie’s head off. Why don’t they just invest in better swords? Just chop off heads and you have fewer problems. Or just shoot them in the head? Why all the focus on getting the heart? It’s like ignoring the soft-belly of an armadillo because you just have to attack through the armor. Again the problem just seems like everyone is too darn scared to do anything useful. This society is doomed at this rate. A single awesome gun doesn’t solve anything if everyone isn’t smart enough to accept it and mass produce. And even then it’s a long road ahead. Precise shots are not exactly easy. How much training is really required for people to snipe the heart of those things anyways? 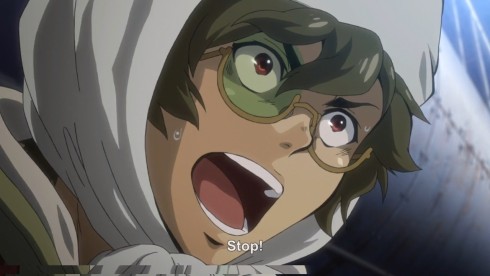 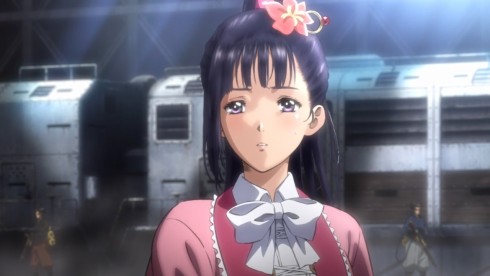 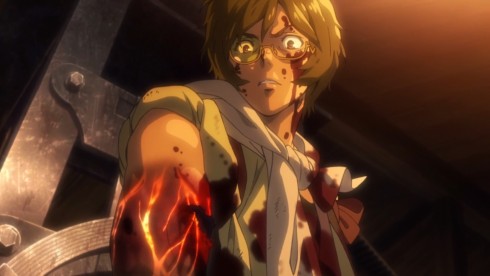 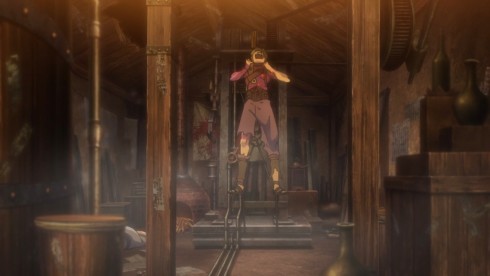 Oh well, this was a good start to the show. Visually the show looks great. The setting stands out nicely being all steampunk. The characters and even the zombies look good. Obviously the zombies aren’t pretty, but they do stand out since they glow XD. The MC is pretty solid, though I am really struggling to not refer to him as Ushio (I know VAs tend to recycle the same voice….but it is a bit distracting, where is Tora?). Someone who lost people in the past and has dedicated himself to doing something. Sure, he’s stubborn on the idea of not running away and setting this ambush was reckless considering the whole station is overwhelmed. But…at least he’s being proactive. He’s channeling his personality into doing something to improve the situation which puts him above 90% of the people in this show. The rest just seem foolish. It’s understandable for a society to be afraid, but if they are all afraid after all this time…they aren’t going to improve anything.

I did enjoy the scene of him tackling his own infection. Made me think back to Parasyte actually. With the MC struggling like mad to not let the alien get to his brain. Though he just had to use some headphone cords while our MC…wow he had an approach. Fair point I suppose he had to be desperate. Realizing that they enlarged the passages inside the body to allow the infection to spread so fast. So if he could just cut off the circulation to his brain…it might save him. Or kill him I suppose if he did it poorly. Since I can’t imagine crushing down on vital passages for blood is a healthy choice. It did work so praise to him. 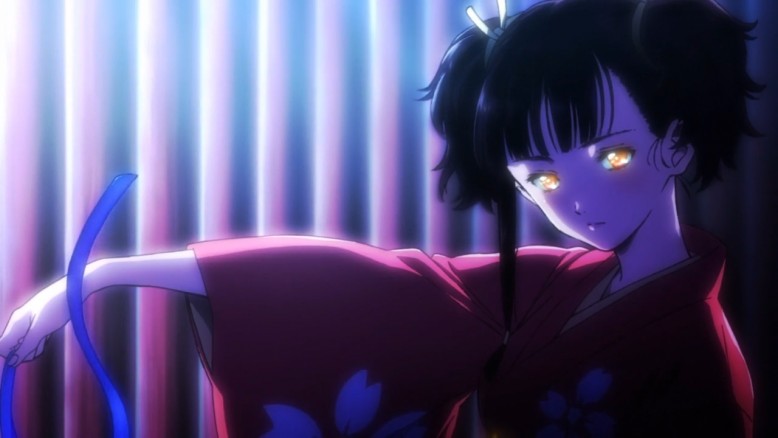 The other character that stood out was Mumei. She looks like this odd child at the start. I’m still not sure exactly what her role in society is or why she is so important other than because she’s a badass XD. Somehow undoing that ribbon on her neck turned her into a super soldier. Just using a bladed sandal to cut a zombie’s head off! Damn! Though she did get it stuck in a post so….sort of too strong for her own good. But I did find her interesting since she does seem to do whatever she wants. Seemed pretty impressed by Ikoma having such a radically different mindset from everyone else. Probably why she won’t kill him later despite his body likely still having some signs of infection. 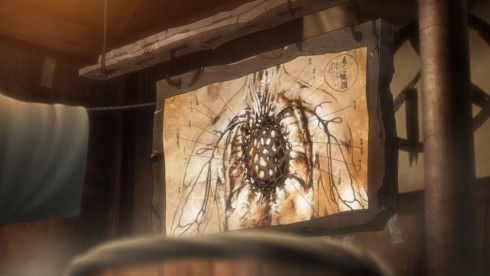 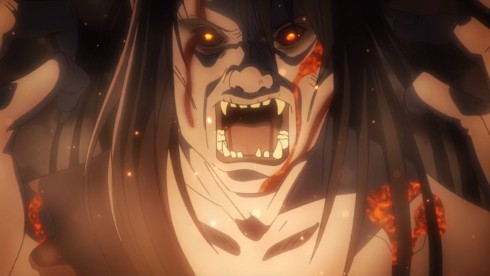 I’ll certainly say this was a solid first episode. It did a lot of things you’d expect, but the world seems like one that will be interesting to see more of. Can the MC despite putting everything on the line get people to change? That’s the issue really. Whether people can change and if not get over their fear…channel it into something useful. It’s a great looking show, it’s very Attack on Titan-ish, and it doesn’t have an annoying main character. Ikoma might be reckless and not know when not to push his luck, but at least he’s not insanely obsessed with revenge or overly frustrating. Guy has a goal and he’s trying to achieve them.

No guarantees I’ll end up blogging this for the season, but it’s another First Look I wanted to do.