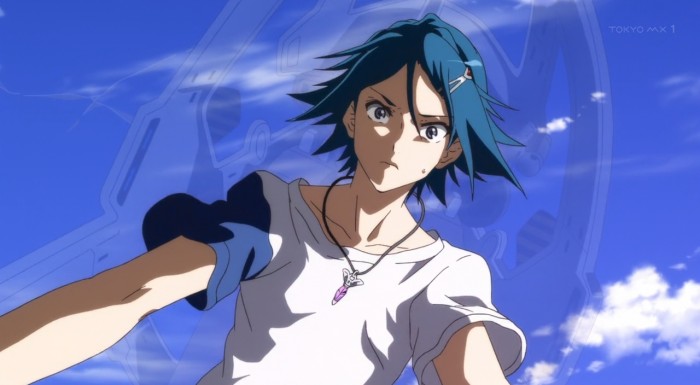 There are concepts that stand out both as being unusual and also entertaining if you can get behind them. The idea that music can be power has popped up in various franchises from Macross to Symphogear. I’ll admit that the Macross franchise isn’t one that I’m heavily knowledgeable about. I basically only saw Macross Frontier a few years ago. But Macross Delta doesn’t hesitate to throw you into the mix and see this kind of thing in action. A kind of amazing interaction between these idols singing and the mech pilots that are fighting alongside them. I can’t even say that they are simply protecting them, since the songs actually do have a special kind of power as well. Allowing these ladies to create shields and even reverse a terrible condition called “Var” that is making people go into berserk rampages.

Kind of an amazing thing really. It’s a very strong mix between mech action and in some ways an idol anime. But, it’s not like this kind of thing is unheard-of considering we’re talking about Macross here. I think the MC Hayate’s reactions are pretty on point at times during that big battle. In how utterly insane all of this really is. You have the one idol Mikumo jumping off a building, making a kind of parachute that she uses as a shield while she’s being shot at by a mech, landing on that mech and actively purging the condition from the person in question in order to turn him back to normal. Power of song indeed XD. 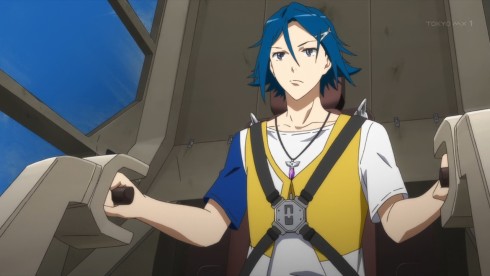 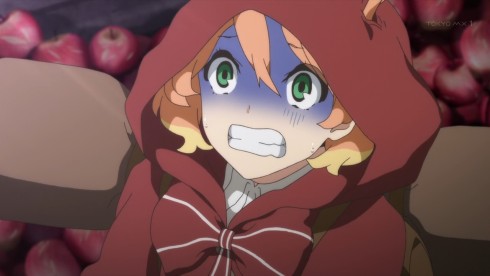 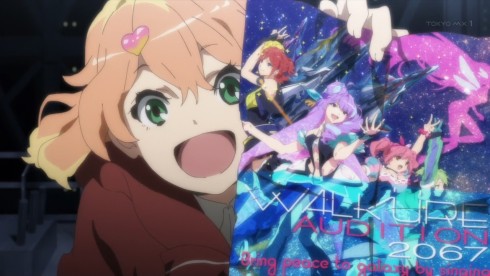 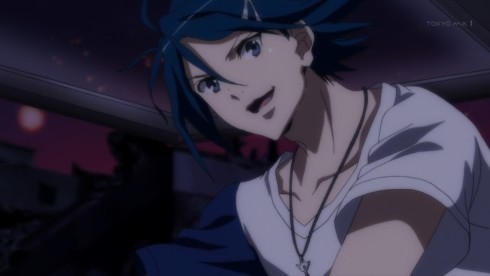 A straight forward start to the show though one with some questions in the air. Hayate seems like a decent male lead. Not a bad guy, but someone who has really gotten frustrated in not being able to find his calling. Bouncing from job to job, never stumbling onto what he wants. Thus he gets bored and probably gets fired pretty quickly. Talented enough to get the jobs, but of course his employers get annoyed after a while. A fair point given though by the stowaway he meets called Freyja. If you just wander around trying to stumble on something you probably won’t find what you want. Have to try and figure out what you want to do and then go after it.

Although to be fair that advice is coming from someone pretty reckless in how she chases her goals. Didn’t want to get married and wants to join the Walkure. Which is basically both an idol group and the only legitimate way to fight off this Var disaster that is doing damage all over the place on various planets. So she jumps onto a random cargo container full of apples and gets taken….not to the place she wanted to go. Luckily she meets Hayate and things turn out…somewhat ok. Things do turn pretty crazy, but in a sense it is in that chaos that the both of them start to find their way. Freyja’s voice playing a role in the crazy battle going on and Hayate finding that his skills actually work pretty well in this kind of combat situation. Able to take a damaged unit and dance around like there was no tomorrow. Apparently dancing in a mech allows you to make some good moves to avoid being shot down. 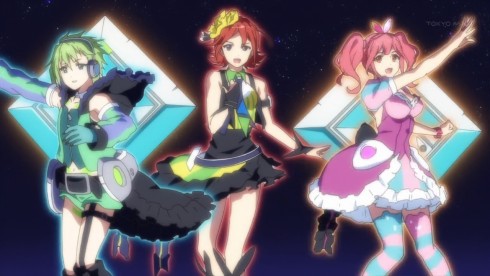 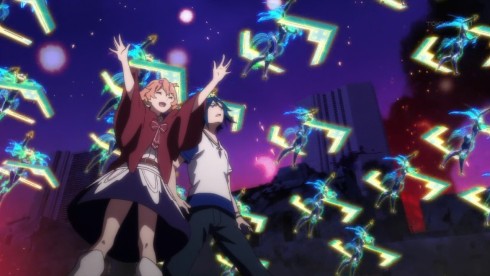 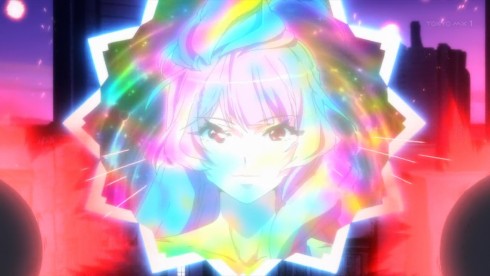 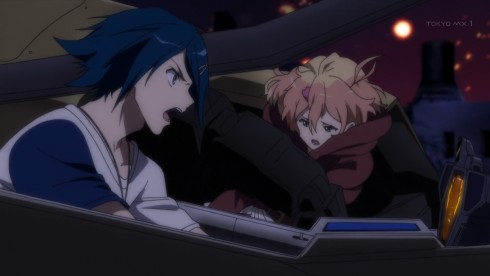 The fight itself was pretty entertaining all things considered. I don’t know, seems to me this kind of setup works well for just leaning back and having fun. The first part was pretty enjoyable seeing the Walkure head out there doing their thing and having pretty good teamwork with the pilots as well. Things got messier after that though when an enemy squadron showed up and added to the chaos. The situation becoming dire enough that Hayate and Freyja ended up taking action.

There’s not too much to say on the part of the action. It was good action. The songs weren’t bad and the dogfighting in the sky wasn’t bad either. This kind of thing leaves me without too much to say without just repeating various moves. I did find it funny to see how some of the song effects could create not just shields for the civilians in the area, but shields that had dancing girls on them so to make them a kind of fun defense XD. 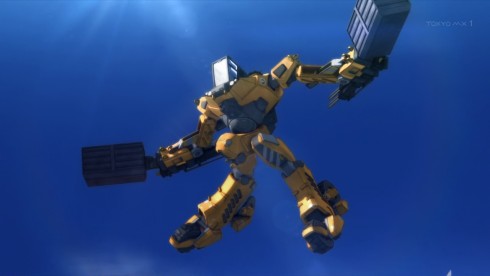 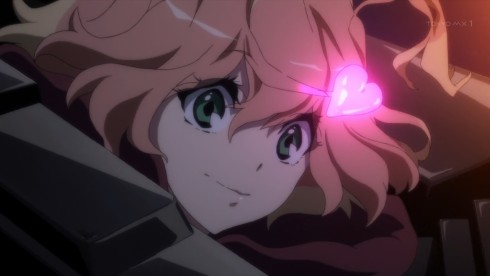 In the end it’s not a bad start to this show. Can’t say it’s likely I’ll pick this show up, but I did feel a first look was appropriate. The Macross franchise is a pretty notable one. Seems like this could be a fun ride if they keep the action and music quality up. Though can’t say I’m a huge fan of the Macross tendency to use love triangles, but nothing I can do about that. A solid start and probably one that fans of the franchise could enjoy. It is pretty over the top in parts for those who haven’t seen anything like this, but worth a look I think.