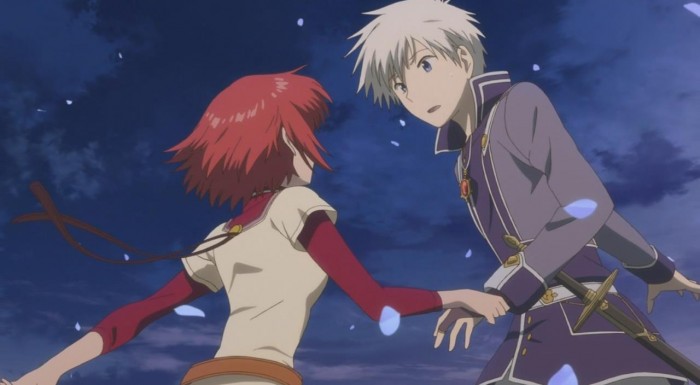 You’d be hard pressed to find an ending more suitable or more appropriate for an ongoing manga’s anime adaption, than the one that Akagami no Shirayuki-hime presented this week. I really do believe that the ending we got for this series is the happy medium; it ends on a positive, satisfying note that can stand on its own, while obviously still hinting at there being more to this story that’s yet to happen.

The fact of the matter is this; Zen and Shirayuki are now officially a “go”. They’ve always been a go I suppose, but at the end of this episode, its more or less set in stone that the two of them have all the pieces they require to officially be together. Its kind of strange that the last 3 or so episodes have done most of the heavy lifting, but we now have a pretty sweet situation on our hands for our core couple. 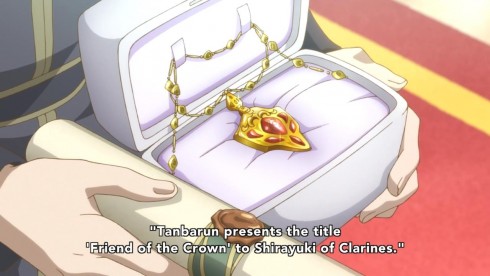 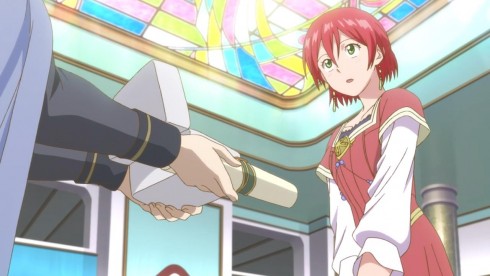 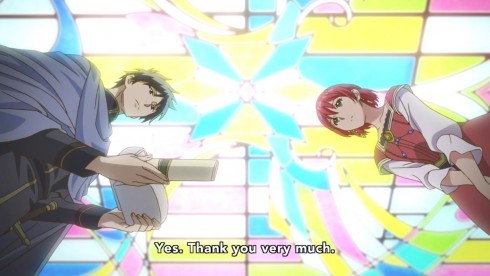 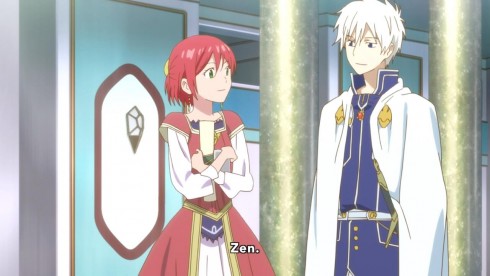 The issues I have with the Taubarn arc aside, it does lead to the very important title that Shirayuki receives this week. And make no mistake, this title is friggin important, if only because it lands legitimacy and fame to a girl that was otherwise a commoner and someone of lower social standing. With the tile of “Friend to the Crown” given to “Shirayuki of Clarines” there’s a lot of meaning behind Raj’s rather shrewd move.

See, by putting in the phrase “of Clariness”, not only is Raj appreciating and giving Shirayuki serious political and diplomatic power, but he’s doing that while associating her with the country that she’s currently in. The problem of Shirayuki being a nobody that the common folk would find offensive as a potential queen or princess? Gone. 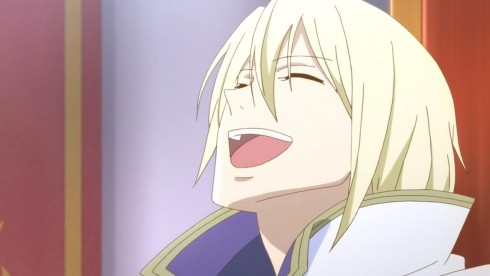 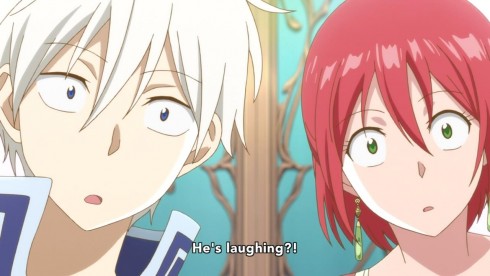 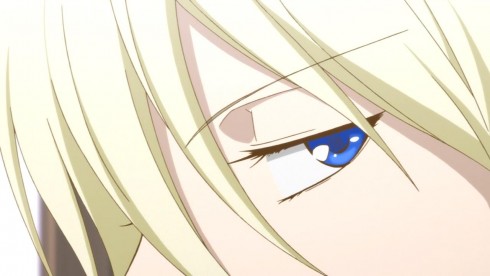 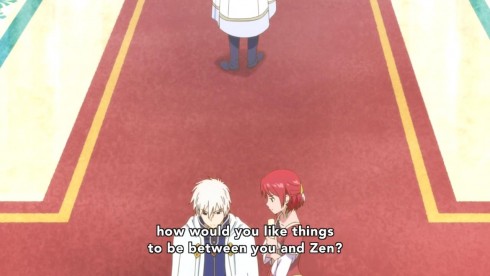 And its because of how darn perfectly this all turns out, that Izana starts laughing as loudly as he does. I’m sure Izana planned to use this whole Raj situation to Shirayuki and Zen’s favor, but even he couldn’t have predicted how well this would turn out. The laugh is genuine surprise mixed with happiness, because despite his hard and sharp demeanor, Izana’s already blatantly said that he’s on the couple’s side.

But what I found endearing about this whole affair, is that while Izana may be pro ZenxShirayuki, he isn’t about to hand them what they want, or make things easier for them. Izana’s a big driver of progress for these two, because even as Shirayuki gets the title that even she doesn’t quite understand the significance of, Izana is quick to pose the next challenge. 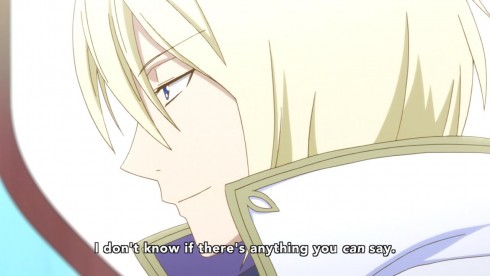 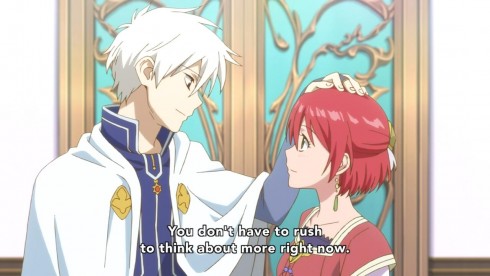 He knows how Zen feels, he knows how Shirayuki feels, but its still important for Shirayuki to take the next step and openly, officially declare what she wants. And we find out, that Shirayuki herself has kind of been avoiding the issue, and taking her time to fully formulate the confidence to openly fight for being with Zen. There’s been a passiveness to her ever since the start of the second cour, and while I attributed it to a lack of characterization and development, it was actually a sort of personal issue that Akizuki-sensei was setting up.

Its by the end of this episode, that Shirayuki basically decides to go all in. She decides to finally tell Zen that she loves him and more importantly that she wants to be beside him. For Zen, who’s been waiting for this declaration since the start of the series, this is big. Really big. 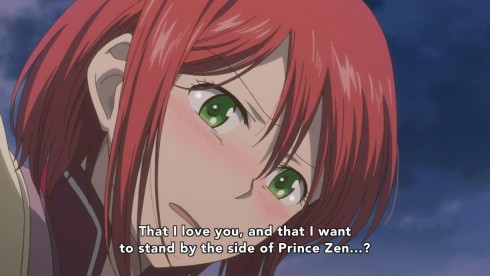 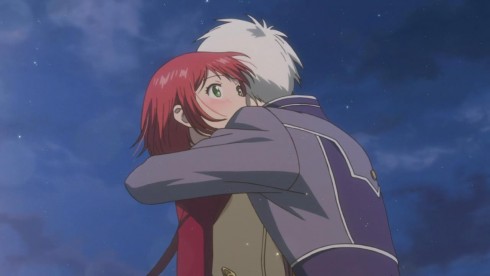 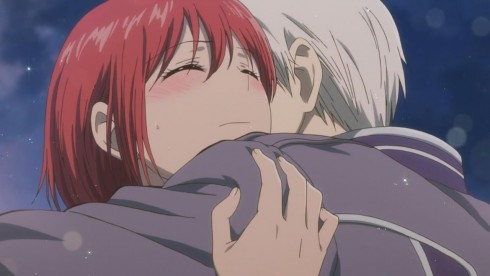 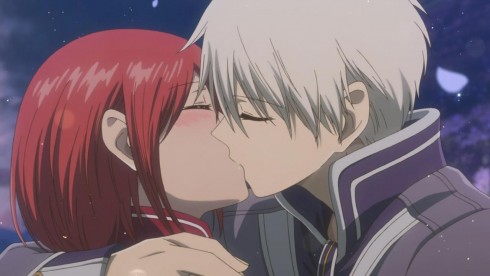 The embrace, the kiss, the display of affection, it all feels so earned and so powerful because its been a long time coming. Zen finally gets to hear the words that he’s been waiting for, that he’s told himself he can wait forever for. When he does hear those words, obviously emotion gets the better of him, and through his embrace, Shirayuki herself loses her own sense of balance.

Its the typical romantic moment, where two people finally connect to one another and reciprocate their feelings. Its a typical moment, but its done so well, and it feels so powerful because even at its lowest points, Akagami no Shirayuki-hime has always been about this moment. Since its inception, the story has always been about Zen and Shirayuki, and even though this episode feels like a bit of a repeat of the first cour’s major decision moment, there’s enough new material here for it to feel monumental. 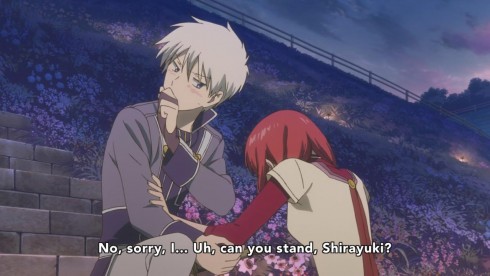 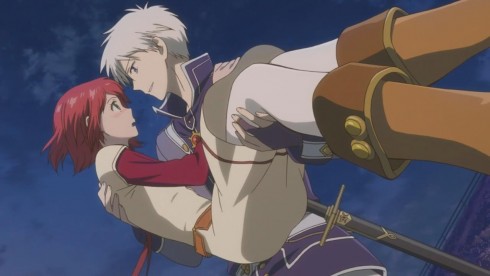 But I think beyond just more or less setting up the eventual life of these two main characters, this last episode of the series ties up almost all the loose ends in a rather satisfying manner.

There’s Obi, who beautifully transitions away from his unrequited love, to an active ally of both Zen and Shirayuki. He finally takes his rightful place beside Mitsuhide and Kiki, and becomes the third best friend of the star couple. Its a great moment, one that isn’t ruined by any lamentation, any hurtful feelings of a love lost, or anything like that. Obi is one of Zen and Shirayuki’s most important and reliable friends, and the fact that the show ends on that note, is just great to see. Its great to see for me, personally, because I was never a fan of the odd Obi, Zen and Shirayuki love triangle that temporarily made its way into the story. 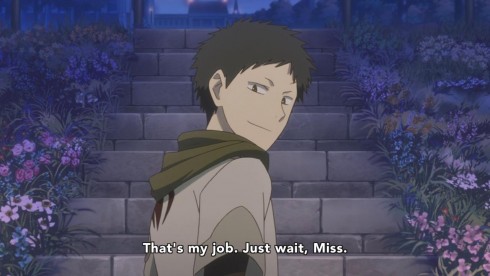 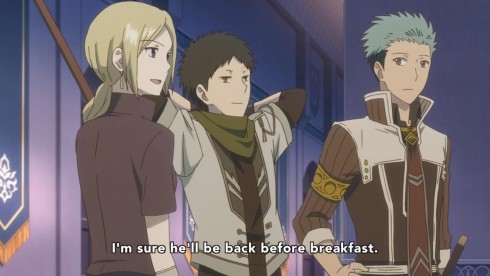 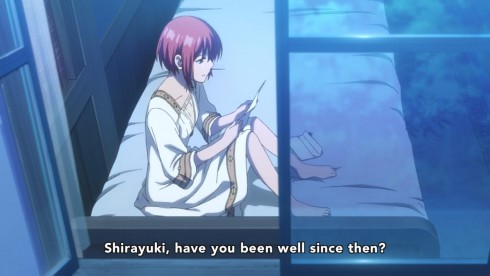 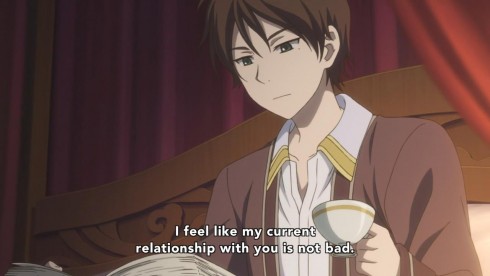 Then there’s obviously the other guy, Raj. I really really like how Raj not only decides that having a friendship with Shirayuki is more important to him than being with her, but that he also is working to help her find happiness. The letter that we see from him is evidence of the fact that Raj understands the unique situation that Shirayuki and Zen are in, and he’s doing the noble job of helping them out in any way he can.

Its kind of ironic, that the guy who started this series and story as a despicable villain has now transitioned into one of the most selfless and noble allies that these two (Zen and Shirayuki) now have. I’m not entirely impressed with Sasaki’s backdoor attempts at trying to win over Shirayuki, but I guess the guy is loyal to his prince to a fault. 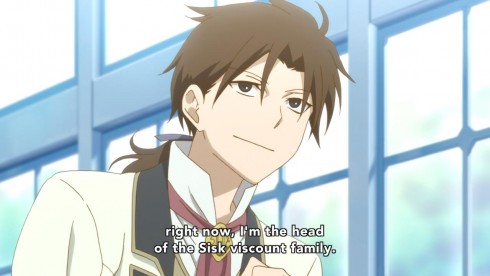 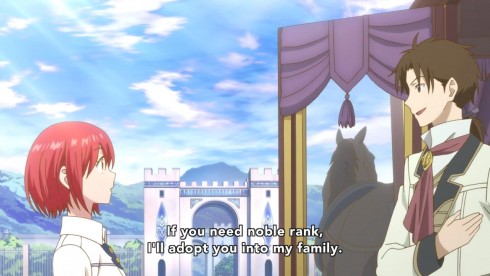 We even find Mihaya to be in a better place, now a noble and even he offers to adopt Shirayuki and make her a noble should she need it. Its not a terribly necessary gesture, but it still shows a redemption of sorts for a character that, again, was a villain and antagonist of sorts at one point.

And I think the most important thing about Akagami no Shirayuki-hime’s ending is that it leaves us with the same sense of tranquility and calm, that made its world so endearing and easy to get lost in. Everyone in this show is nice, they’ve found their place and their way of helping each other, and they’re all moving forward. 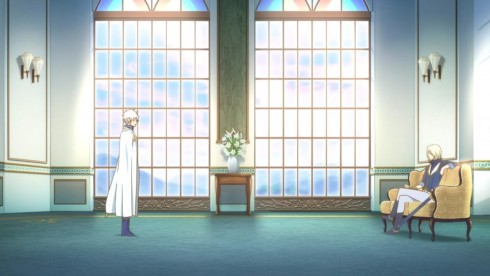 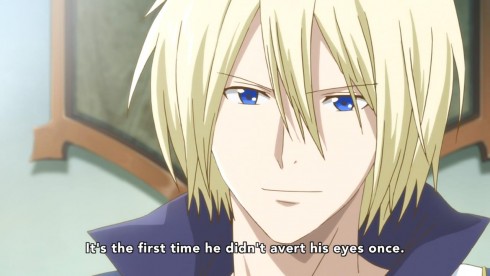 Its a really nice, positive moment to end the series on, and it feels like a pretty satisfying ending as well. Shirayuki and Zen will get married at some point, its inevitable now. Yes, we don’t see it, but the implication of all being good and heading towards that happy ending, is I think enough.

The only flip side to it all, is of course, that with an ending like this, there really is no chance of another animated version of this story. For all intents and purposes this is the last we’ll probably see of Akagami no Shirayuki-hime in animated form. And It’d be wrong of me to say that that doesn’t hurt a bit. I want to see these characters finally tie the knot on screen, and I want to see their story conclude. I understand that the reality of the situation doesn’t permit that, but given how stellar these past few episodes have been, that desire just reemerges, again and again. 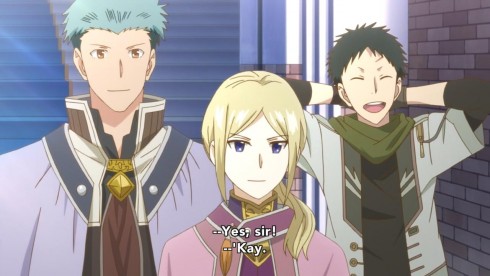 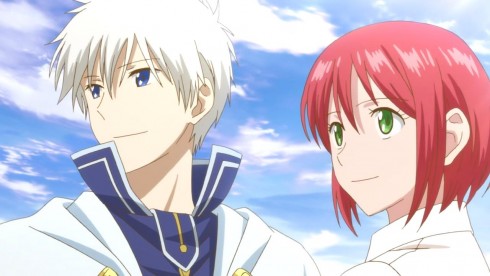 In the end, I guess this show and this ending are the best kind of promotion to get me to follow the manga. I do believe that Akagami no Shirayuki-hime is a manga that I will read, not because I felt cheated from the anime, but because I want to see the extra few moments that the anime couldn’t adapt in the time it had.

I think Studio Bones did a stellar job of adapting this manga story and making it as likable as possible. The only time this story stunted for me, was during the Taubarn/Raj arc, but again, that was more so a problem with the source material than the adaption itself. As a whole, I’m almost inclined to remember Akagami no Shirayuki-hime fondly, rather than get caught up in the few problem areas that it had in it second cour. 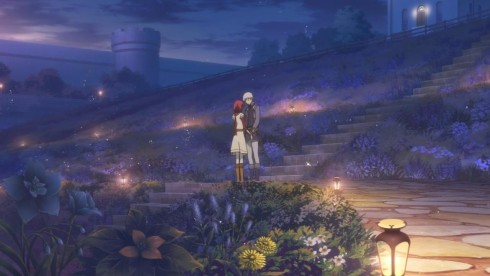 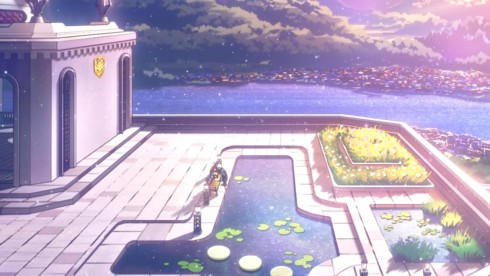 A good round of solid episodes that go back to the basics, plus a solid ending, can definitely change one’s opinions of the whole. And I do believe, that as a whole, Akagami no Shirayuki-hime was one of the best shoujo anime series I’ve seen. And given how much I love that genre, how much of a hopeless romantic I am, and how much anime I watch, that’s pretty high praise. 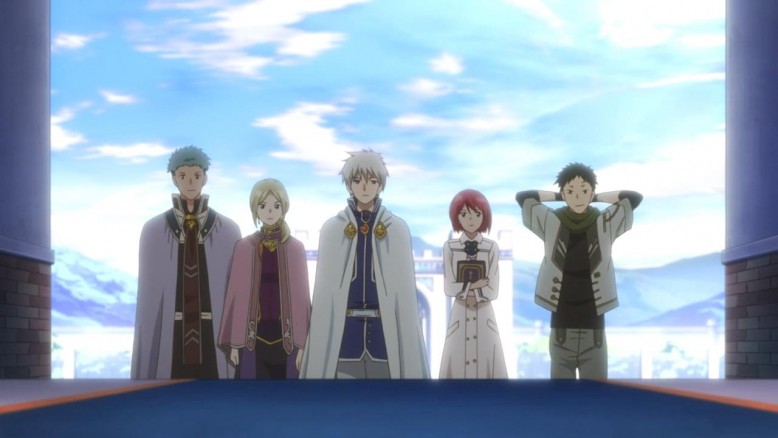 Its been a fantastic, magical journey seeing the love story of Zen and Shirayuki unfold and reveal itself over the course of these two cours/parts.