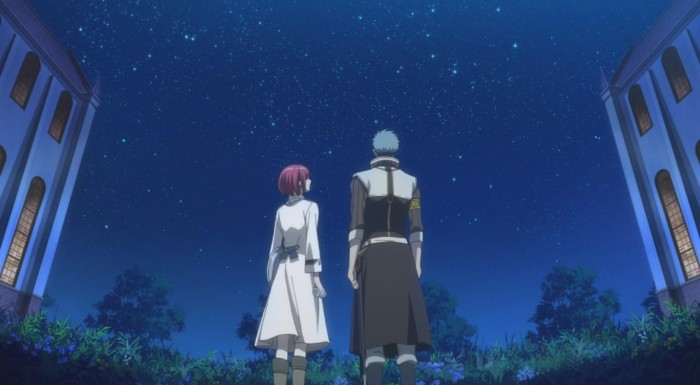 I had fully expected to do a double episode review post after I had missed the deadline to cover this episode, the week it came out, however… This episode was just so spectacularly good, so very Akagami no Shirayuki-hime through and through, that I couldn’t help but give it its own post. This episode is yet another example of what I wanted so desperately to see from this second cour of this show, and its another reason why things continue to feel weird as we head towards the finale. 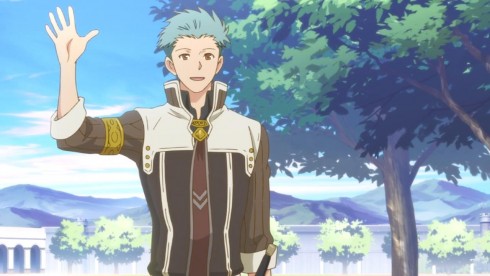 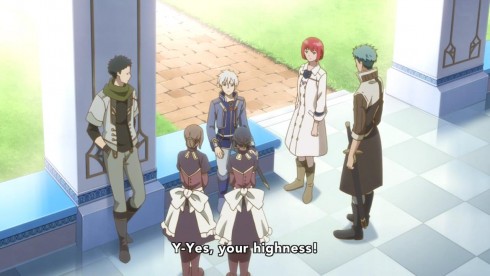 Full disclosure, as of writing this post I have not yet seen the last episode. The fact is that I was just so mesmerized, so utterly impressed by this penultimate episode, that I couldn’t help but take a second to pause and appreciate everything that this episode did right. In my eyes, this 23rd episode of Akagami no Shirayuki-hime is just perfect, its everything I sought from this series, and its everything that makes me desire another 24 episodes of this franchise in animated form.

The major appeal of this show, at least to me, has always been its fantasy, escapist quality. There’s a wonderful world that we see in Akagami no Shirayuki-hime, and that’s the world of castle in Clarines where Zen and co reside. This place, its magical. There’s a complete sense of peace, happiness, excitement and positivity that I think us normal people generally get to see very rarely in our own lives. 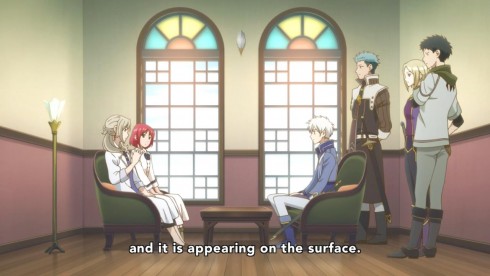 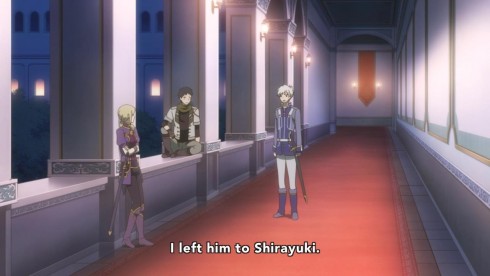 That feeling, of activity, of importance, of all these characters living their lives and doing mundane things that feel so natural, normal and interesting, that’s the essence of the Akagami no Shirayuki experience. The show takes a fantasy medievil world, puts on this atmosphere of tranquility and happiness and just captures the audience’s imagination and joy.

The kind of stuff we got this week really is the sort of stuff that marks the highlights of this story and franchise. Its the seemingly little crises, such as Mitsuhide going all crazy due to the side effects of a medicine he unintentionally gets exposed to, that make even the seemingly normal and mundane eventful. 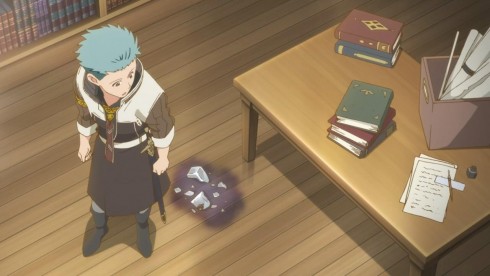 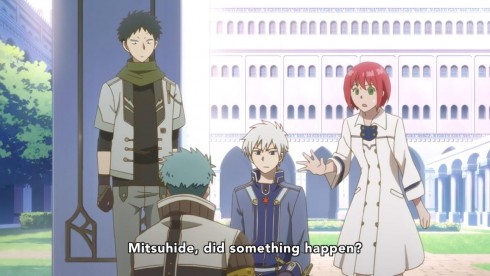 A story doesn’t need to have action, drama or even tension to be interesting and entertaining, but damn do very few shows actually manage to create an engaging story without any of those things. But Akagami no Shirayuki-hime? Its just so good, in that it not only creates a new situation and scenario that’s comedic genius and fun, but its also a scenario that pushes the plot forward as well.

More than anything, this whole situation with Mitsuhide is so darn believable. Its the kind of thing that a group of friends would definitely run into or grapple with. I think every one of us has the story of the poor friend who was a bit inebriated to function, and caused some hilarious mishaps as a result. Its that feeling of being able to relate, mixed with a bunch of characters are just so wonderful, nice and good-natured, that makes it all work. 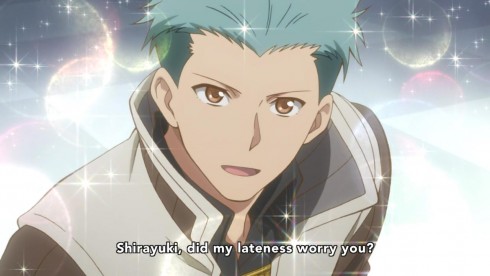 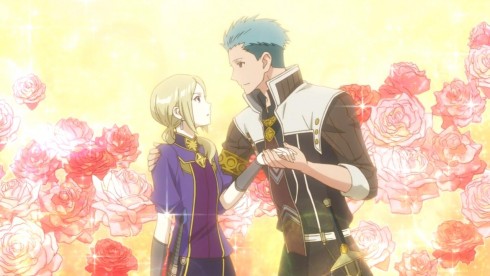 Mitsuhide’s loyalty is amplified, almost to a stiffling degree, and everyone around him just can’t seem to handle it. Whether its Kiki being thrown off by Mitsuhide’s rather direct, confident approach to her, or Zen’s own annoyance at being extra micromanaged, coupled with all the cheesy embarrassing lines that just… keep coming, its all done in good spirits and feels pretty entertaining.

And its amidst this little situation, that Zen realizes how much he still has to mature and grow, and how much he relies on all his friends, including Shirayuki. There’s some nice moments, as Mitsuhide, in his weird state, finally pushes forward the question of the couple’s future to Shirayuki as well. 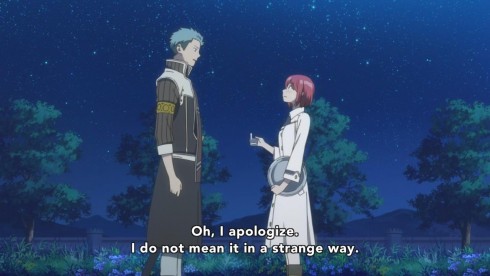 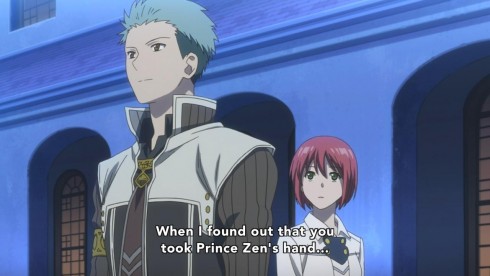 In the traditional sense, its still very hard to picture Zen outright marrying Shirayuki officially, given his position. Its not that its not the right thing to do, but rather Akagami no Shirayuki-hime with its world building has pretty much spelled out how bizzare and near impossible that all is. 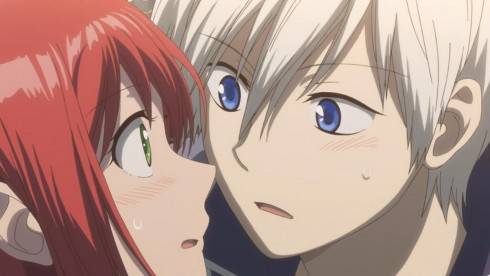 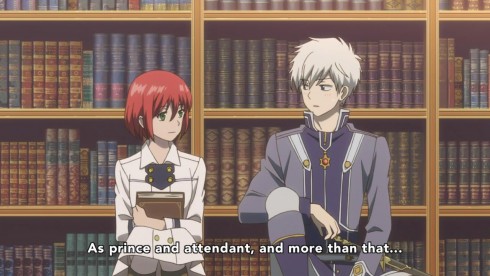 But, that sense of futility doesn’t even exist this week. There’s a hopefulness, a sense that everything will be just perfect, and its all created because of how the world and its characters continue to just be good people and work their way through the challenges they face.

There’s no sense of animosity or ill will from ANY character. Its true of characters like the Chief Herbalist or Ryu. And let me take a second to talk about Ryu, because I’ve all but ignored all the good little moments that he’s had throughout the series. Ryu’s connected with everyone, and I’d say he’s definitely the most likable child character I’ve ever seen. The akward shyness but the general goodwill that this kid exudes is so great to see, and his adoration of Shirayuki and Zen even more so. 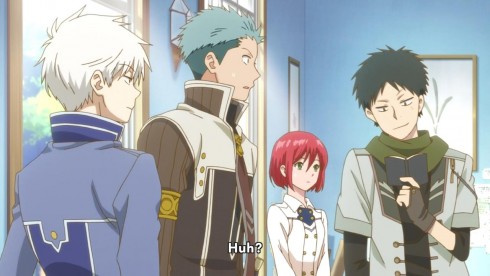 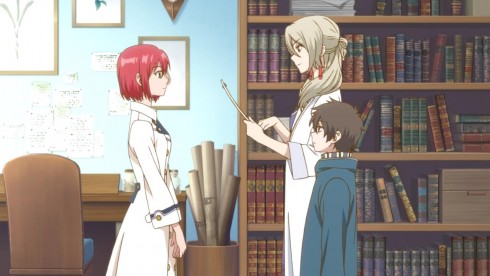 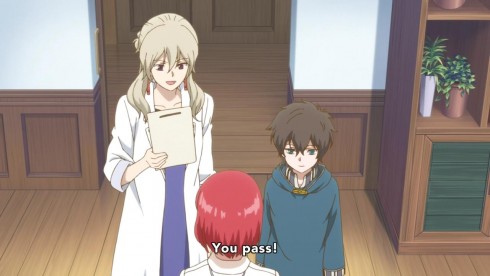 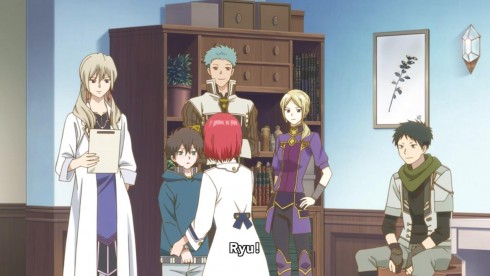 And while most of the episode is about Mitsuhide and his hilarious warped personality issues, on the back end is also the final test for Shirayuki as a Herbalist. And as expected, Shirayuki, through her dedication, hard work and general great attitude, is able to pass her final test with flying colors.

Its the last moments of the episode, that really highlight everything that I’ve been talking about (and gushing about). Shirayuki passes and becomes an official cour Herbalist, Mitsuhide is back to normal, and everyone enjoys a great moment of togetherness and happiness. 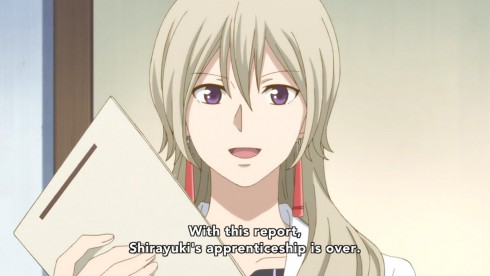 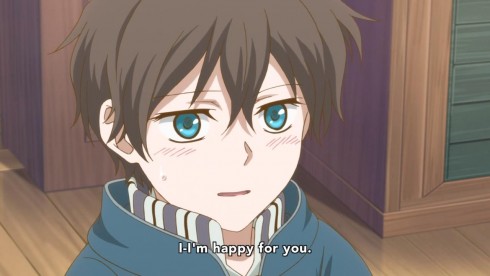 The characters in Akagami no Shirayuki are the kind of people that you’d want to hang out with. They’re the kind of people in the kind of world that many people, including myself, would kill to be with and be a part of. And its that likability, that sense of wanting and longing to escape to a faraway, fantasy land where everyone is happy and nice, that I think really encapsulates what makes this franchise so special.

As I head into the last episode of the series, I’m glad that it used this kind of episode as its second last one. Whatever the finale may hold, however it does end, I will say that I was really glad to experience this episode, because it almost, almost made up for all the weird detours and changes of tone that made the second cour very difficult for me to enjoy and watch. 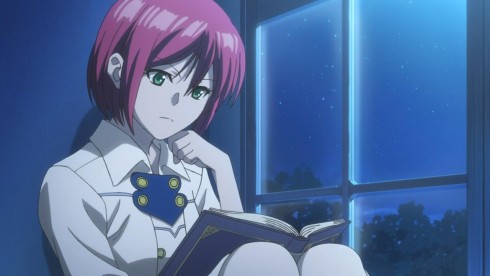 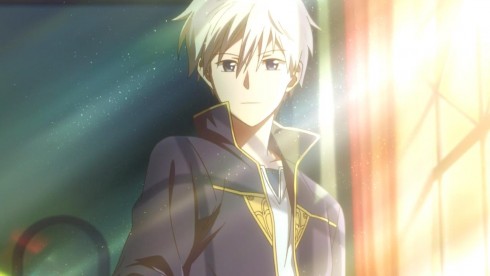 Sometimes, the best moments come at the most unexpected of points. Now, as I finish writing this, I’m going to go ahead and watch the final episode. I realize that not many people will read or bother with this post, and that’s fine. This post is more of a personal reflection anyway, its me gushing and talking at length about an episode that just did it for me.

And if you’re someone like me that consumes a lot of entertainment, you can definitely appreciate how rare and powerful these types of moments are. Alright, I’ll shut up now…. See you in the post for the last episode.