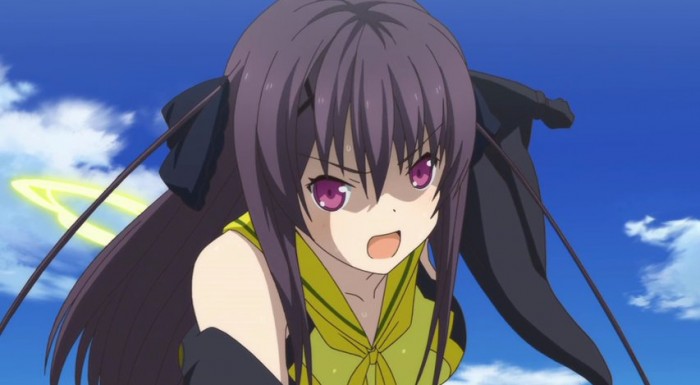 We have the build-up to the confrontation in these two episodes – the final confrontation between Asuka and Saki, and I for one am looking to it quite a bit. On the one hand we have one episode focusing on the intensive training for the Fall tournament, and the other episode focusing on the first half of the tournament itself. One of the more interesting aspects about episode ten was that it gave insights into the training regimen not only of the protagonists (like is, Asuka and the FC club), but it also showed how Saki and Irina train and a bit of their past as well. Saki and Irina seem to have met each other and become friends when they were quite young, and they both happened to be present at an FC match of the young Kagami-sensei (who seems to have been both a inhumanly skilled FC player as well as a sort of ground breaking pioneer in that game skill wise) where she executed a move known as “Angelic Halo” – something both of them regarded as incredibly beautiful, and which both of them wanted to be able to do as well. This birthed their partnership and interest in FC, it appears. 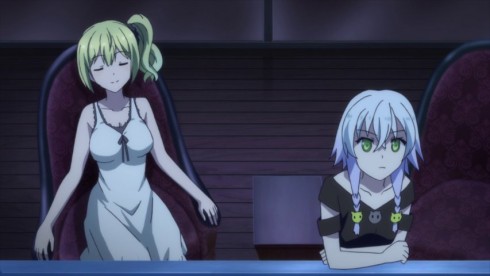 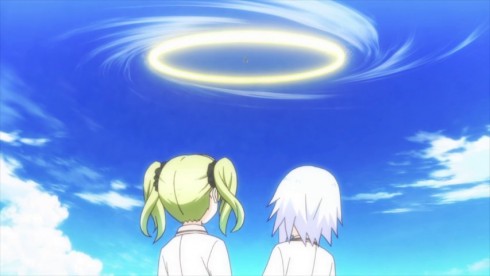 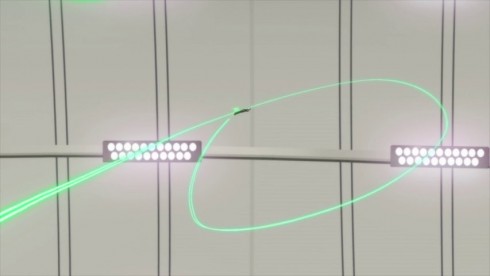 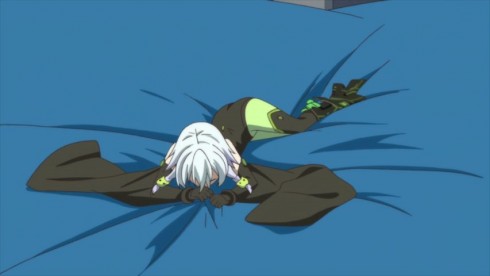 The depictions of Saki’s indoor stadium style training was ruthlessly vigorous and intense – it is no mistake that she is as skilled as she is, she has trained to exhaustion and nearly spitting blood. Interestingly the grav shoes she wears appear to be a little out of the ordinary (some have wondered if she will be disqualified next episode for using them) but a key to her incredible strength is hinted at related to a tweaking of the grav shoes settings. At the same time the footage of Misaki, Saki and Mashiro’s special training on a nearby island is also rather gruelling – not only intensive endurance training, but also practice underwater, which is equated to a “more intense version of dogfighting” by Masaya since it uses far more muscles to swim and move against the water proper and is “ideal for perfecting membrane control” of the grav shoes. One of the more interesting parts shown in episode ten, though, is a chance meeting and conversation only between Saki and Asuka. Saki is petting a cat in an alley and Asuka catches sight of it. She asks if it would be okay if she pet the cat as well, and the cat (being a cat) turns away with a mischievous “Hmph!” Asuka laughs shyly and awkwardly, saying that the cat seems to hate her, to which Saki responds that the cat is simply being shy. The two of them have a brief discussion afterwards that seems to end stiffly, but I could not help but feel that Saki was behaving exactly like the cat … and more than that, that perhaps Saki is a bit of an “indoor cat” who has only been around one person – Irina. More of that later, perhaps…. 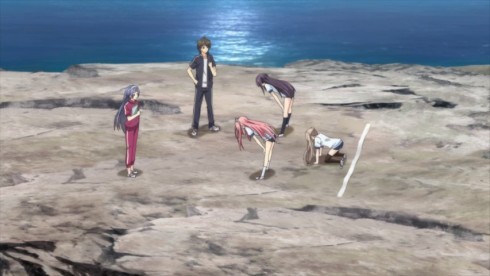 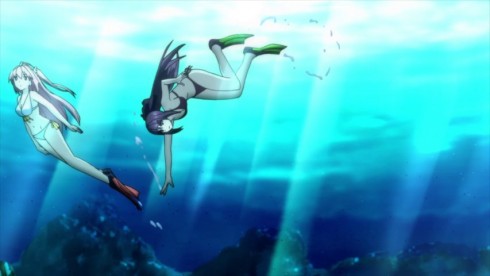 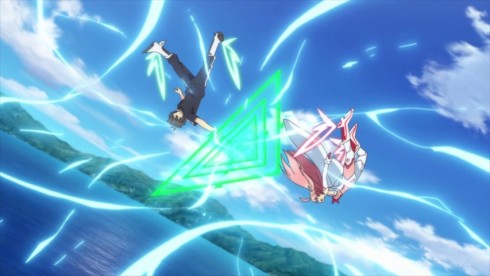 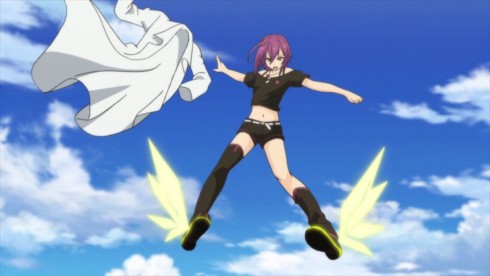 After all the training regimen’s intensity we have a very uplifting moment when Shindou come to help them and then Masaya (!) finally re-equips the grav shoes to train the three of them, and then, to crown it all Kagami-sensei herself joins them! (I almost felt sorry for them all when Kagami-sensei showed up, but only almost. XD ) At first I wondered how much money Saki and Irina might have paid for a training session with Kagami-sensei, but then I had second thoughts … in some ways it feels as if they (Irina in particular) is trying to surpass her on their own steam, to somehow “prove” that they are better even than she was – perhaps because they do not let themselves be “hampered” by “moral concerns” or the like? Hard to say, but especially after episode 11 I began to think that Irina is the one who is more invested in succeeding by ignoring normal or common moral concerns or the like than Saki is. Saki is in some ways more simple and straightforward and does not seem to worry too much about “all that sort of thing”, it seems. 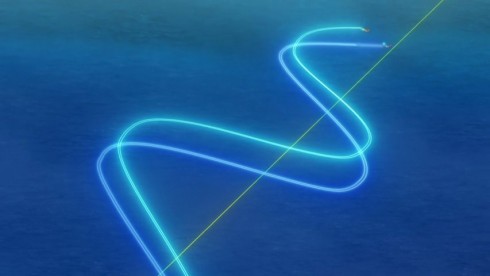 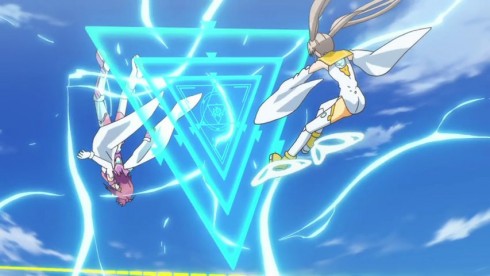 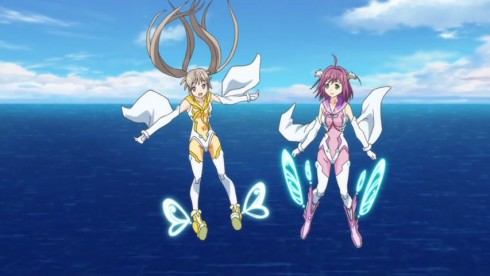 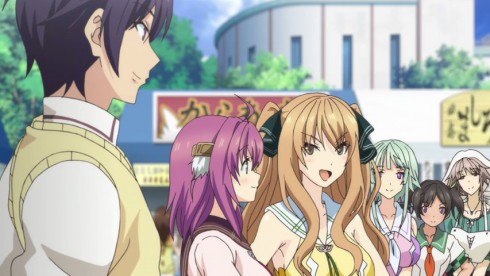 Finally with episode 11 the all-Japan Flying Circus Fall Tournament West-Kyushu Qualifiers begins. The competition is fierce, as expected, but with Shindou not participating in this tournament (perhaps preparing for College exams?) when the semi finals come round the match is between Misaki vs Saki, with Asuka winning the other side of the tournament bracket and waiting for her challenger. Unsurprisingly the match between Misaki and Saki turns out to be quite a competition between the two, but more than anything else Misaki’s tenaciousness causes something in Saki to “snap” and she “moves on her own decisions” (perhaps she came out of her shell or safety zone to a degree?), much to the shock, disappointment and even disgust of Irina. Saki barely wins the match by only a point, but Irina is livid and mutters how that was the most repulsive victory she has ever tasted. 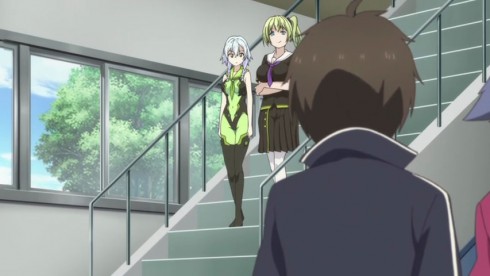 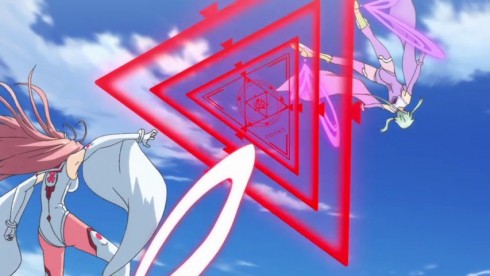 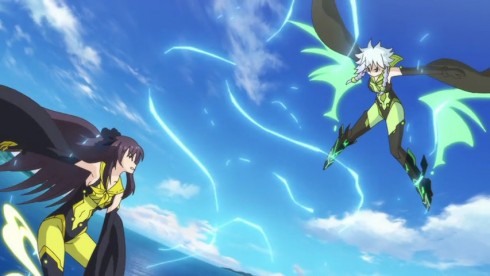 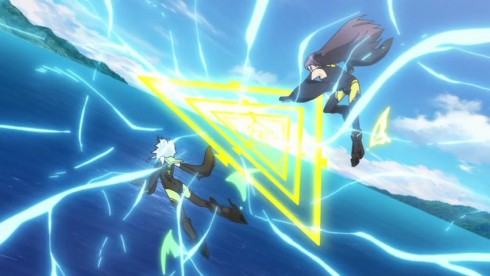 I only wish that the past few weeks have not been so hectic and intense for me and that I was able to delve into the aspects of this series in more detail. One of the signs that a series with a “predictable” story line is doing a good job is that even though you know what is coming and how things will probably end you still are excited to see it and even may have “split seconds” of anticipation or “oh noes!” moments while it is taking place – and thus far this series has done exactly that. I knew, for example, that Saki was going to defeat Misaki in episode 11 and that it would likely be a close call. Even so, while the match was on I was on the edge of my seat! That’s good writing – something that I wish there could be more of in contemporary anime series! Hopefully next week’s episode will be able to wrap things up in an uplifting manner!