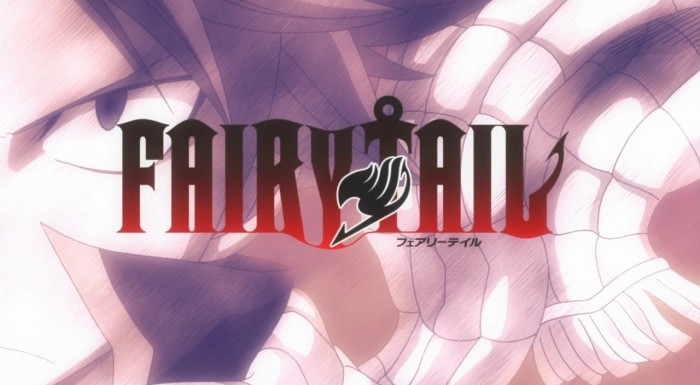 And just like that, in what feels like the blink of an eye, Fairy Tail’s second series is over. To say I or any of the series fans saw this coming would be wrong, but we have had about a week to process the hard fact that Fairy Tail isn’t going to be part of our lives anymore, and for who knows how long. I think as far as last episodes go, this was clearly not intended to be one, but it does serve as a kind of stopping point, as inorganic as it is.

Did Mashima-sensei and the A-1 Pictures Anime team plan it all along this way? What was the point of showing us Fairy Tail Zero at all if Fairy Tail isn’t going to get another season or series later on? Well the good news on that front, straight from Mashima-sensei himself is the fact that a new anime project is due in the future, and one that he will be leading himself. 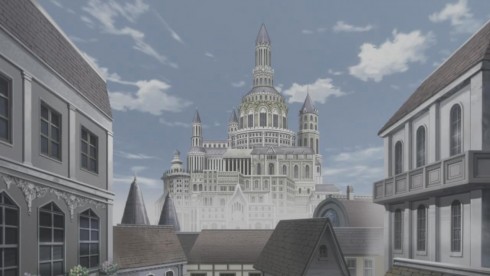 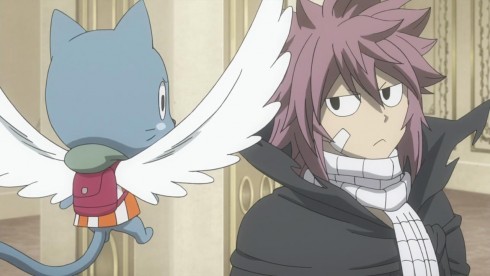 I’m not entirely sure what that means exactly, and whether the current series was stopped for that very reason, i.e to allow Mashima-sensei more control over the next series and perhaps the final adaption. One of the most striking things about Mashima-sensei is how involved he is with not only his manga and franchise, but the anime production itself. So in the end, this is more of a temporary stop perhaps, rather than the final send off for this series and franchise.

With that in mind, does Fairy Tail’s 277th episode do anything noteworthy before the franchise takes its next big animated break? Well not really. Its kind of a laid back, funny and sweet little episode. Picking up from where we left off last week, its about Natsu and Happy Reconnecting with Lucy. Each party is pretty much catching up on whatever happened while they were seperated, and while Natsu is as much of an open book as he always is, Lucy is obviously a bit more reserved and hidden about everything. 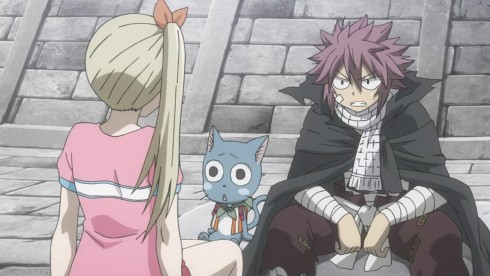 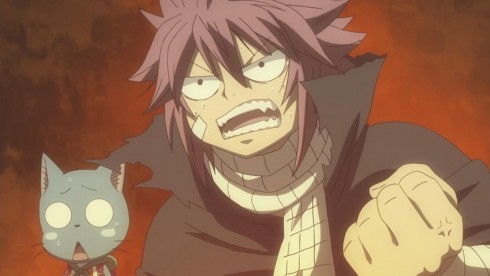 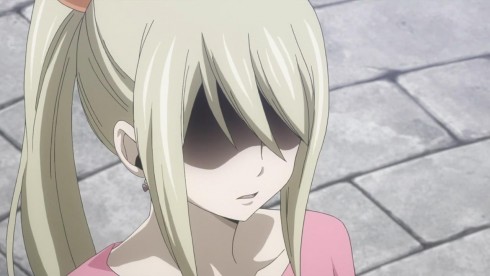 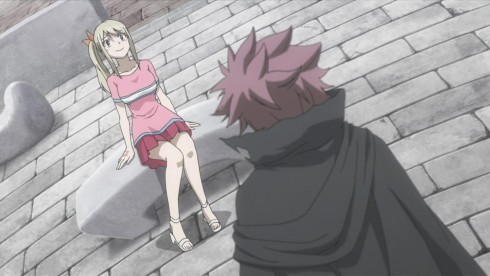 I think the most telling moment of the entire episode, is when Lucy finally lets some of her hurt and anger out, and tells off Natsu when he suggests that Fairy Tail’s members should have opposed the disbandment of the guild. And Lucy is just so right that even someone as hot headed and loud as Natsu finally takes a step back and THINKS about what he may have done.

Agreed, Makarov and Natsu were both entirely selfish in whatever decisions they made, and its indirectly because of them, that the guild disbands. Would the guild have continued with Natsu there? Who knows? Like Lucy says, he was never even there to do anything about it. 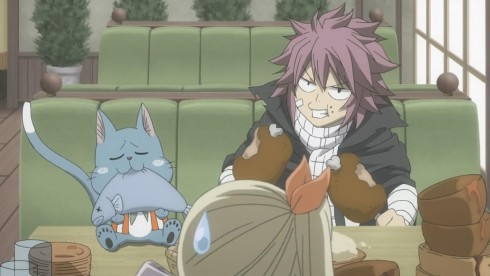 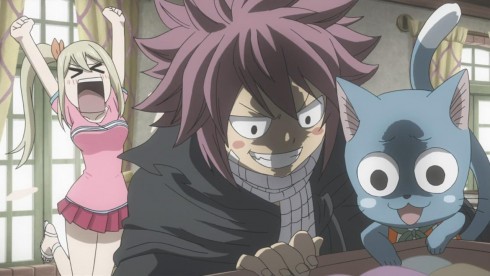 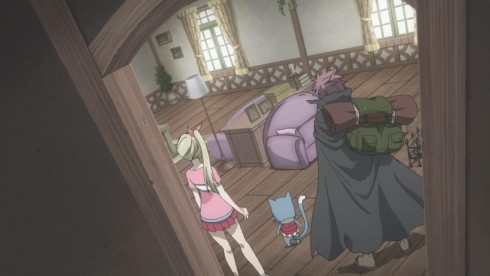 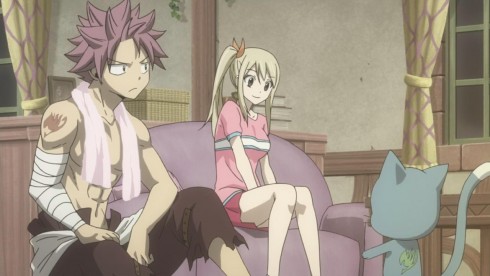 Most of the episode, is actually just that. Us seeing Natsu again, and slowly but surely him coming to terms with what the current reality really is. And for the one little moment that Lucy does lose control over, its pretty darn admirable how nice she really is. After having been abandoned by her friends, losing her family, and then even sacrificing Aquarius, you’d think that the girl would have some issues or pent up hatred for Natsu and everyone else.

But, one of the most refreshing things about Lucy is just how nice and warm of a person she is. In terms of shounen genre female characters, Lucy has got to be my favorite, and again, props to Aya Hirano for continuing to make her such a joy to hear, alongside just watching. 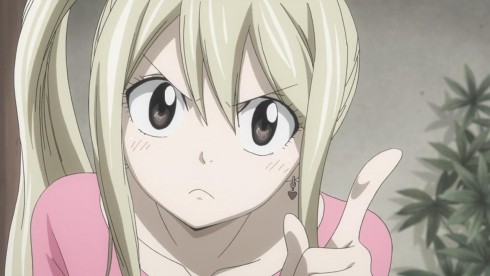 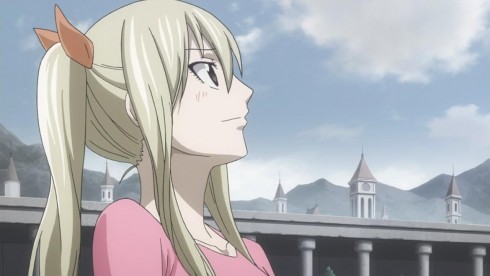 Of course, once Natsu does end up catching up with Lucy, its later that night that the true revelations happen. I kinda liked the stupid, somewhat childish reason that Natsu and Happy had for sneaking into Lucy’s room, and it subverting any creepy undertones for the whole thing. Its also very Natsu-like to want to draw on Lucy’s face while she’s sleeping.

Instead of doing that, however, Natsu and Happy come upon the big chart that Lucy’s been putting together. And one look at that chart would tell anyone how much Lucy misses, wants and even needs Fairy Tail in her life. In some ways, Lucy has needed Fairy Tail a lot more than some of the other members in the guild, especially now that she has no blood relatives left, or even friends outside of that guild. 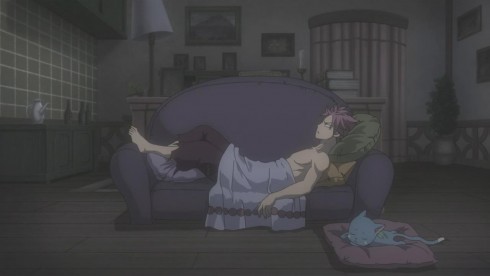 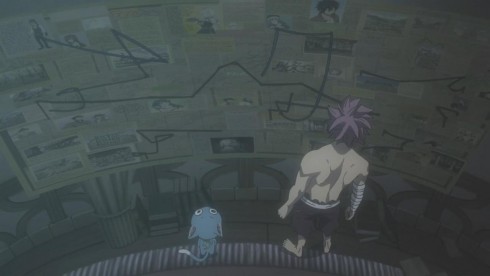 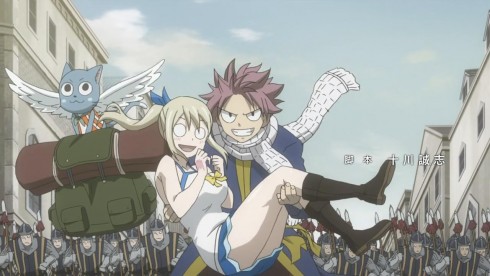 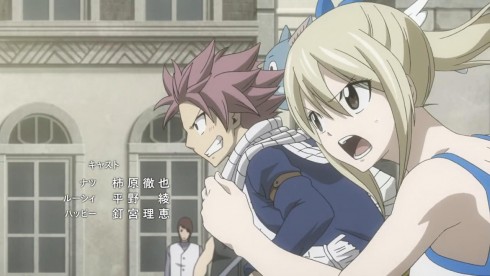 It is great to see, that at the end of the episode, Natsu basically takes the reigns and decides to gather all of Fairy Tail himself, with Lucy and Happy in tow. Its the most hopeful and exciting point to end the series on, in a way. We know that things are going to be awesome moving forward, and we know that the Fairy Tail that we love and adore is right around the corner.

There’s some exciting questions on the way too. What is everyone doing nowadays? How have they changed? Who is going to be the Guild Master? Why did Laxus not just take over Fairy Tail like Natsu suggested? What is this new guild going to look like? 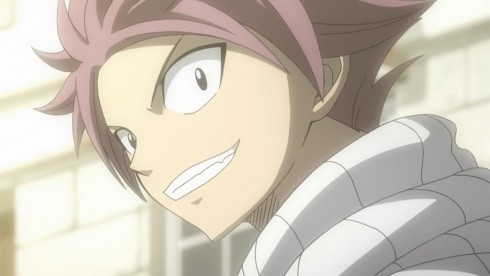 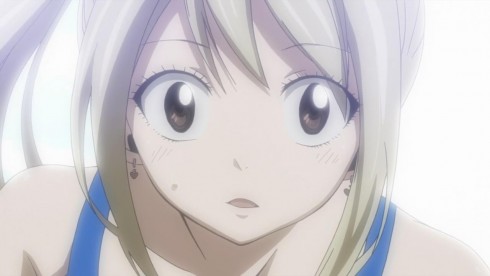 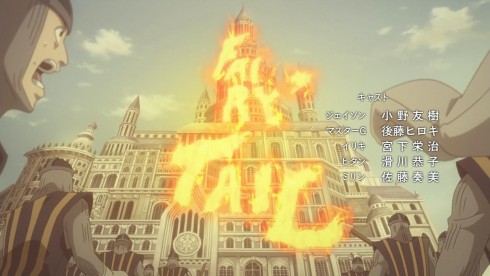 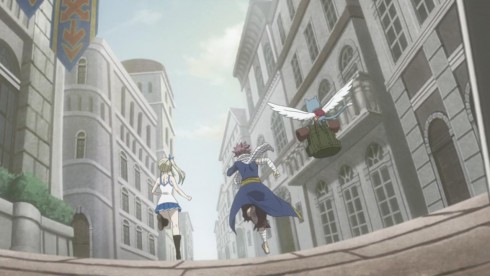 So many questions, and well, we’ve got a bit of a wait ahead of us. I don’t really have anything monumental to say beyond what I have this week. Fairy Tail’s second series is over, and I think the montage at the end of literally every arc since the franchise began, is a nice reminder of everything that we’ve experienced and enjoyed.

We’re back at that point now, where we just wait for Fairy Tail to come back. When that happens? Whether its a year from now, or two? Or possibly until the manga itself ends? Well that I’m not sure of. But I’m thankful. I’m Thankful for almost two years of Fairy Tail, and I’m thankful to know we’ll get more. 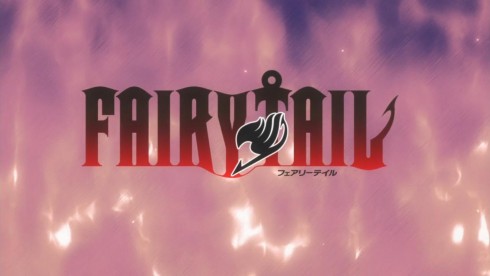 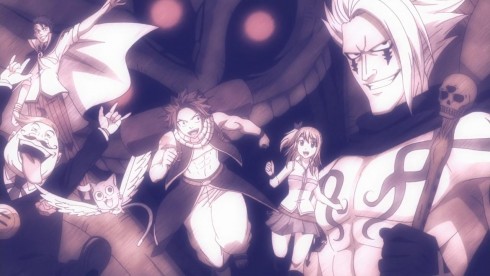 And while Its always tempting to jump forward and continue on with the manga, I’m going to wait. I’m going to wait because I want to experience Fairy Tail for the first time when it ends up coming back. For all of you, who enjoyed reading these posts, and took the extra time to comment, Thanks. It was a lot of fun talking and enjoying Fairy Tail as a community.

The final thing I’ll say is that Fairy Tail and Mashima-sensei is something that deserves respect, and your support. Unlike other franchises of similar notion, i.e One Piece, Naruto, Bleach e.t.c, Fairy Tail is one of those series that doesn’t milk itself or its fans. There’s a sense of pride, of care and of professionalism to the way that Mashima-sensei handles his franchise, the way A-1 Pictures continues to develop and further this franchise. 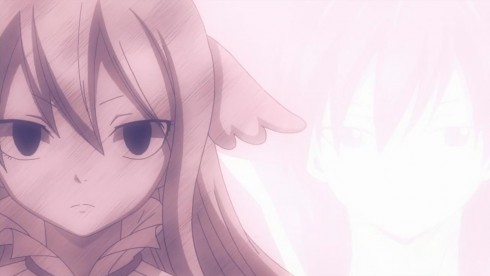 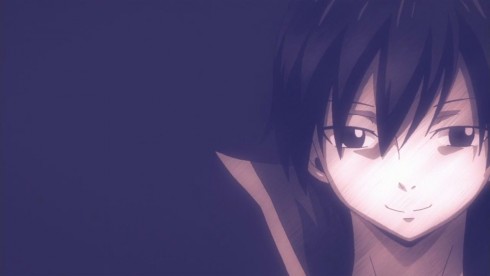 So if you like this series, if you read the manga online, or watch the anime, and have had derived some joy and enjoyment from this stellar franchise, then go out and support it. Buy some merchandise, get some of the DVDs, buy the manga volumes. And no, I’m not being paid to suggest all of this, its something I truly believe and do myself. I mean, just the fact that Mashima-sensei took the extra time to actually address English speaking fans on twitter, is proof of how at least for this franchise, fans outside of Japan do matter.

With that said, I’ll see you all around. Whether we see each other again when Fairy Tail resumes in animated form, or whether I end up breaking my rule and covering the OVAs, or if you end up sticking around at Anime Evo in the interim, following other anime series, it’s been a pleasure. See you next time!