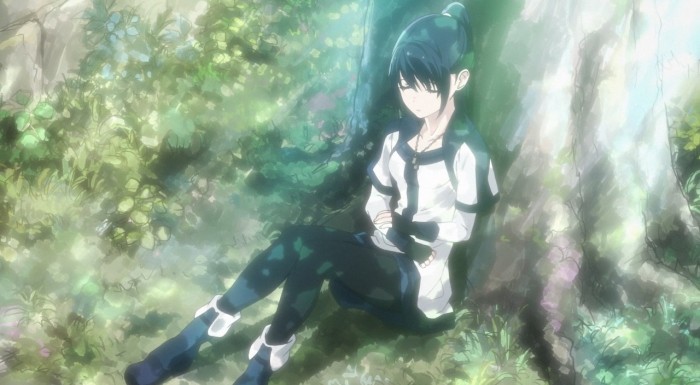 Well I’d start off by saying please don’t watch the preview for next week…Sure Grimgar hasn’t been that subtle when it comes to events coming in the next episode, but geeze…Shame on the guy who approved that. At least the episode content itself was really good. Can’t say I completely expected them to run into Mary’s team at this point. Neither did I expect them to be that strong. Burning corpses in that world isn’t just important for mental well being, but physical. These zombies are incredibly dangerous. The stronger the person that dies the more dangerous they become. It wasn’t that easy a fight and Haruhiro’s group had the numerical advantage. Plus they could speak and plan. The bodies of Mary’s allies were just fighting mostly on their own. Goes to show how far ahead they still are in comparison to Haruhiro and company. They have improved, but if their parties were thrown at each other (somehow clone Mary)…Haruhiro and company would probably lose outright.

Now they do have one advantage in that they are willing to run when things are bad. They aren’t arrogant enough in their abilities to rush into challenges they have no chance at. Being weak if nothing else has given them a good ability to read the situation. Just aren’t as naïve. Though that doesn’t mean it’s always possible to simply run for it. 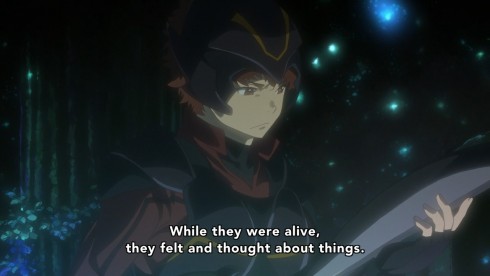 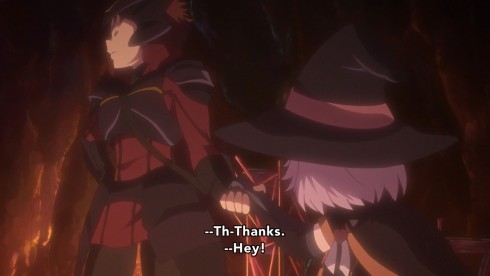 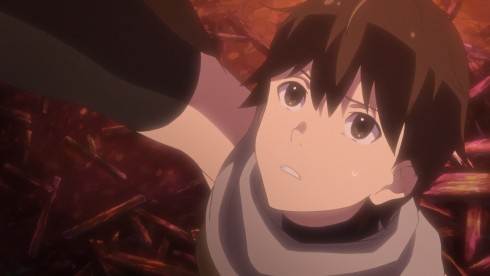 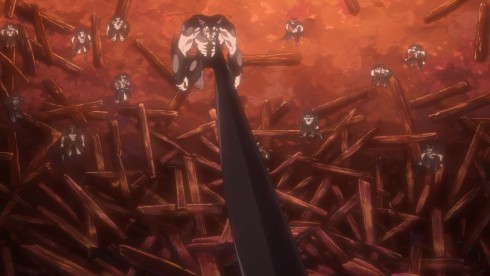 And back to Ranta….goes from annoying and dangerous to somewhat useful. Was the author just making him go way out of character for the sake of distinction in this episode? Makes no sense that someone as dangerous as nearly stabbing their leader could pull off some very subtle attacks and even make it in time to catch a falling Haruhiro. Really doesn’t make that much sense to me. Sure there are times when I think he can do better if he tries, but this seemed a bit too extreme. Regardless he was fairly useful this time around. Managed to keep Haruhiro alive when things were looking bleak. Still not sure I can rationalize nearly stabbing the guy to the whole “we can’t lose you like Manato” kind of discussion. If you kill him in a fight then you’ll lose him…

Probably not what the show was going for…but I was kind of excited to see Ranta fall down there XD. Of course the fact that he fell and didn’t immediately die basically means he’ll survive. Kind of sad in a sense that Manato gets sniped by a goblin, but Ranta can stand on top of a hill like an idiot and a small army can’t shoot him down with arrows. Safe to say he’ll be fine. Just means they have to get him out of there. Little doubt that someone that annoying can’t actually be allowed to die. Can’t have the whole team be likable after all. Though might push my believability for someone like him to easily survive this. 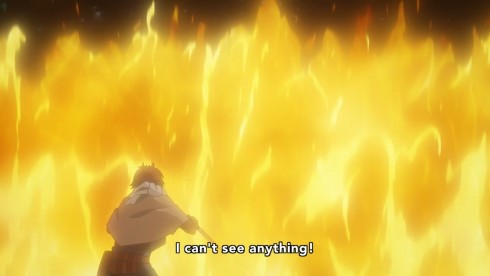 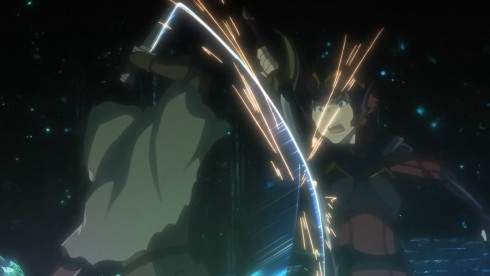 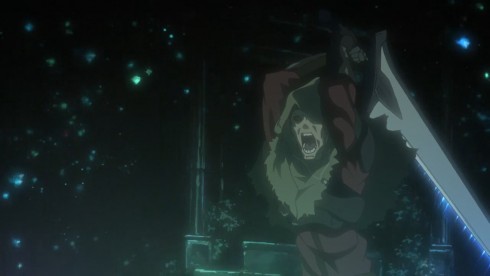 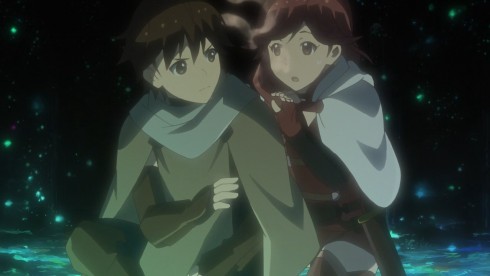 The fight itself against Mary’s old allies was quite solid. Have to say it shows that maybe it would have been nice for Shihoru to get some fire spells instead XD. The shadow magic is good support, but damn fire has a good psychological edge against most creatures. Having fire thrown at you, dealing with a flame wall, etc. It’s very difficult to deal with. At the very least this fight was a good learning experience for the group. They all (or mostly) got a lesson on how far they have to go and improve. Moguzo could barely handle the warrior he was dealing with and was getting overwhelmed by that agility. Ranta couldn’t make any real headway against the thief and even Haruhiro couldn’t win one on one. Shihoru as well wasn’t as effective and could certainly improve her firepower and variety of spells. She’s probably locked into shadow magic, so will just have to reach the higher tiers. I do like the idea of Yume getting a pet though. That kind of support would be very useful and avoid her being overwhelmed when the does have to go up close to fight. Plus something adorable about Yume and a wolfdog.

In the end though teamwork did come through for them. A very effective group effort brought down the warrior, a bit of recklessness by Mary handled the mage and some decent team play handled the thief. They got through that without any real injuries outside a few burns. Nothing that made them unable to run away later. That darn Death Spots though was something else. They really had to run right from the start and that was the only reason they weren’t wiped out. It was too dangerous. Even just that thing alone is a monster, but he was able to call in help. That number of opponents would be too much to fight on their own. 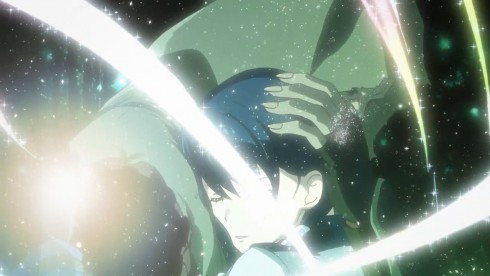 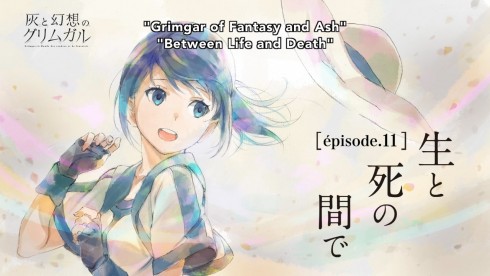 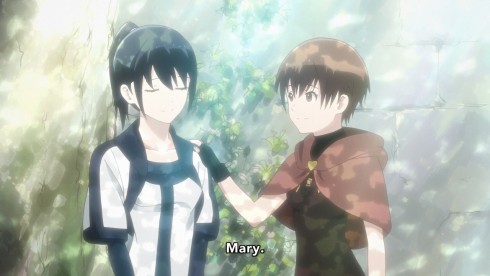 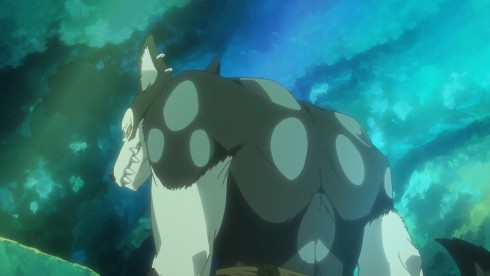 The retreat was pretty fun. The insert song worked and just added to the frantic nature of it. They were just going as fast as they could only doing what was necessary to keep that pace. War Cry to create an opening, fighting a little, but continuing to move. Heck even the quick thinking with Moguzo grabbing Shihoru since she probably couldn’t make that jump herself with Ranta carrying his sword. Even Yume using her head and covering them with some arrow fire to make it a bit easier. If it wasn’t for that insane Death Spots going after them….they probably get away easily. I’d be worried about Ranta…but he’s definitely going to be fine.

In the end it was a really good episode. I enjoyed the action, the character growth, even the early part with Mary lost in her memories. Can see how close she was to everyone. Maybe she should have spoken up seriously about her fatigue in how they were progressing or maybe their leader should have paid more attention to it. Too focused on the idea of falling behind other groups than their own safety. In the end though…what happened, happened. The key thing is moving ahead. With the level of seriousness they have I can’t see this bunch actually losing anyone, even Ranta. Just have to wait and see how the next episode will unfold. And that darn preview…at least give me something to speculate on there.