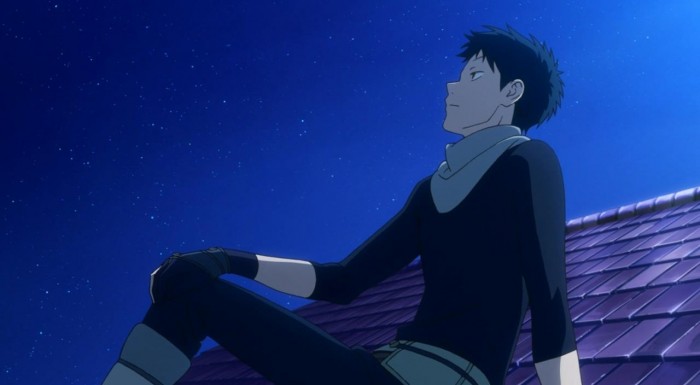 This week’s Akagami no Shirayuki-hime felt familiar, and felt exactly like the heart warming, character driven, uplifting fantasy that I at least, loved from before. This week’s episode was character-centric, soft and even fluffy, and didn’t really do anything too grand or ambitious. This week’s show was a quiet character study, one that focused on and cemented perhaps the weakest aspect of the series thus far, Obi and his relationship to Shirayuki and Zen. 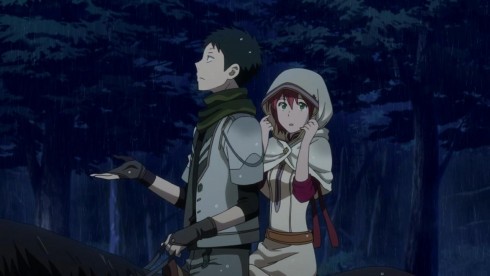 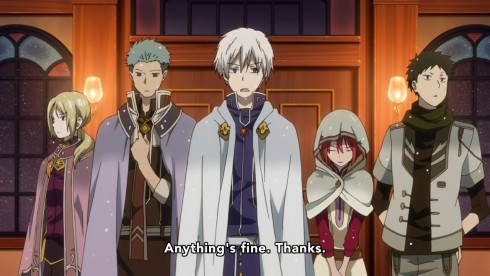 Here’s the thing, since this second season began and even well into the final bits of the first one, there was this whole thing about Obi being interested in Shirayuki. That thing almost got ratcheted up to eleven in the past arc, almost uncomfortably so. Obi being in love with Shirayuki has been something that’s never sat well with me, as I’m sure you’ve heard multiple times by now. And the reason I’m not a fan of some weird Zen, Shirayuki and Obi love triangle is because it detracts from moments like the ones we got this week.

This week was all about Obi and how much the companionship, the trust and the friendship of both Zen and Shirayuki is important and almost necessary to him. As a soldier, a warrior and a mercenary, its obvious that Obi hasn’t seen the sort of care and affection that both Zen and Shirayuki have for him. He’s important to them, so much so, that even he doesn’t quite realize his own value, until Zen himself speaks up. 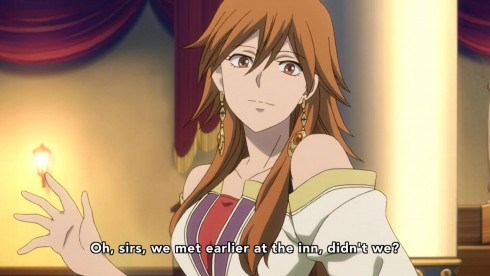 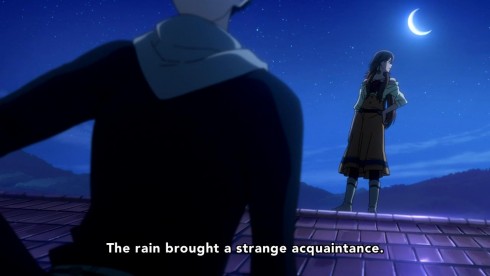 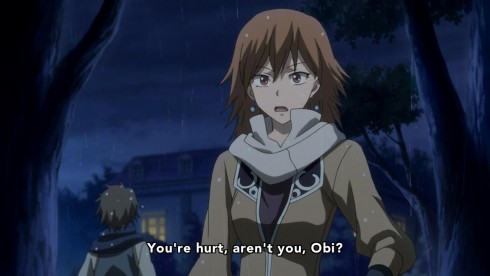 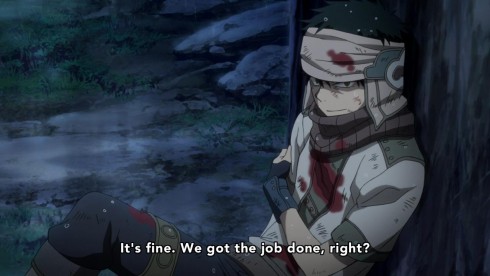 As to how we get to that particular conclusion, the excuse, to kind of delve into Obi’s past and then compare it to his present, is none other than a woman named Trow. Trow’s one of the mercenaries from Obi’s past, and through her, we get a nice image of who exactly Obi used to be, and how much happier and how much better his life has become since then.

And I think that’s a really important statement to make, especially at this crucial juncture in the story. We’ve seen that being around Shirayuki is pretty darn taxing and even painful for Obi. The logical decision would be to distance yourself from the woman you can’t have, if only to mend your broken heart. 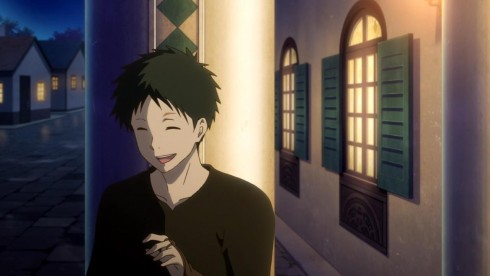 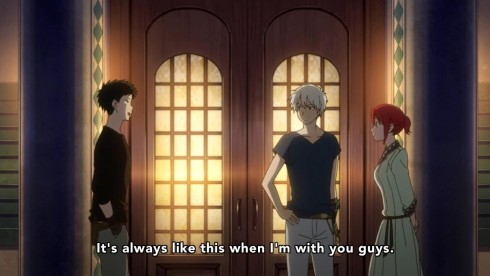 But with friends like Shirayuki, Zen, Mitsuhide and Kiki, is that even possible? Could someone hanging out with and enjoying life with these people really leave them? I know for a fact that if I were in Obi’s shoes, I’d be enjoying every minute of being around these wonderful people. The life Obi has, the joy and adventures and great moments he shares with Zen and everyone else, those matter, and they are both pretty darn important and very enviable.

Its in this episode, that Akizuiki-sensei finally makes the case for how darn good Obi has it. Yes, it sucks that he has feelings for the woman he serves, who also happens to be the lover of his most respected and cherished friend and master. But at the same time, man do Zen and Shirayuki really treat Obi as family. 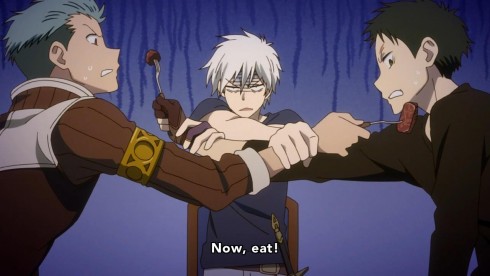 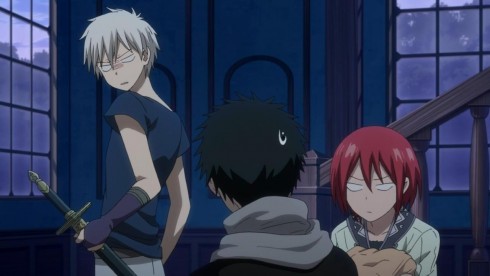 The bond, the almost familial relationship that these three young kids have? Man, its so darn touching, so uplifting and so…Happy. This week’s episode goes such a long way in establishing the sense of happiness and joy that one would have if he were actually in the sort of lucky situation that Obi is in. That fantasy, that longing for actually wanting to join in with this cast of characters? That’s powerful storytelling. THAT, is what makes Akagami no Shirayuki-hime such a fantastic, impressive piece of work.

This week’s episode just felt better in every frigging way, and I really do believe that this heightened sense of immersion and joy that I felt this week, was really because every friggin aspect of this series was just firing on all cylinders. The characters were lovable, the story was quiet and restrained, the atmosphere of the whole rainy, small town inn visit, it all just felt so darn mesmerizing. And yes that means that I’m making my usual sad effort to recognize how darn beautiful, jaw dropping and well done this show is from a production stand point. 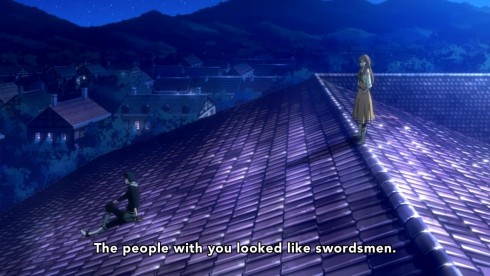 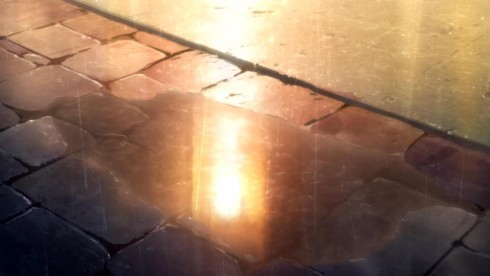 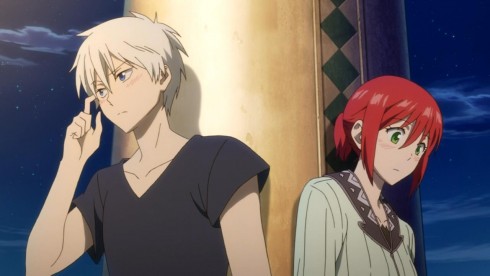 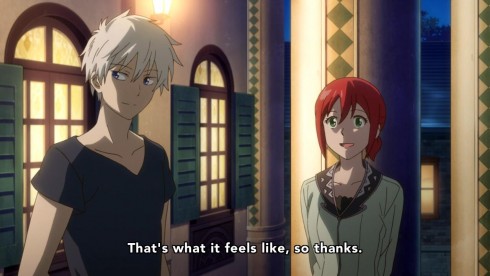 I could go on and on about how wonderful this episode felt, and I still probably couldn’t describe how good it really was for me. It felt like waking up from a dream, a bad one at that, especially considering what we’ve gotten thus far from this series.

Just why couldn’t we have had more of this stuff? Why couldn’t I have had an entire cour of the sort of amazing storytelling and character moments that we got this week? I’ll never know. What I do know is that its because of this episode, perhaps my favorite in the second cour thus far, that I really really don’t want Akagami no Shirayuki-hime to go just yet. 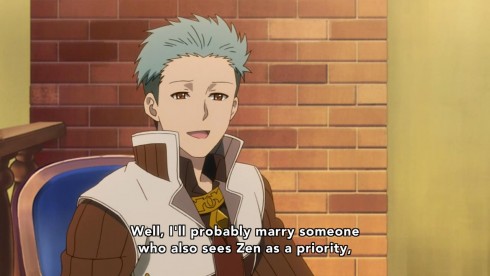 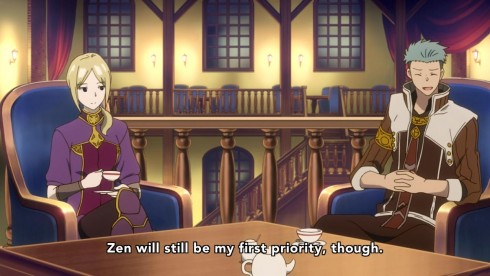 I know, I know, we’ve got another 3 episodes to go, but after this week, that feels dreadfully short. I really do want to get back to Clariness, I want to see an episode dedicated to Kiki and I really really want to explore her dynamic with Mitsuhide as well. Are they friends? Are they kind of interested in one another? Are they more like brother and sister? Those are interesting questions, but they don’t feel like pressing ones. There isn’t a sense of hunger, or lack of satisfaction after this week’s episode, because it all just feels like it’ll be okay.

That’s the show I guess I missed, and that’s the sort of stuff I signed up for. Now that we’ve seen an episode that’s more or less told us what Obi’s value and place in the story is, we now need to visit two very pressing places. One is the eventual end of the story, where we see Shirayuki and Zen finally graduate past being in a relationship, to actually getting married. I’m sure that will come, whether we see it in animated form or not, however, is a different matter. 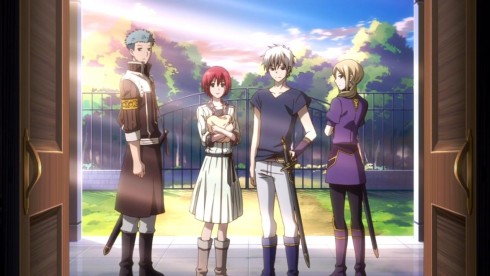 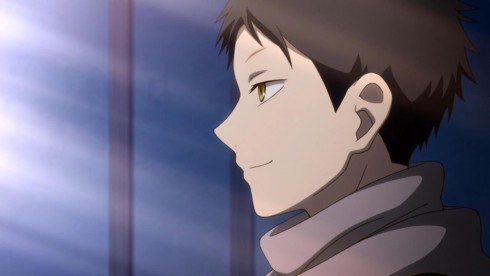 No matter how you slice it, there’s just no way to wrap up THAT particular storyline in just three episodes. And of course, then there’s the fact that this franchise isn’t really over in its parent, source material form. The Manga is still ongoing, and I’m sure that with the advent of the anime, there’s been a nice boost in sales for that particular medium, one that will contribute to the longevity of this franchise as a whole.

So… If Akagami no Shirayuki can’t deliver the emotional crux of its story, than what can it do? Well, what it can do is more episodes like this one. We know how Obi ticks, and I’d reckon that his initial character arc has more or less been resolved. But, there’s still Mitsuhide, there’s still Kiki, there’s Izana and there a wealth of supporting characters that can all use some time in the spotlight and some more development. 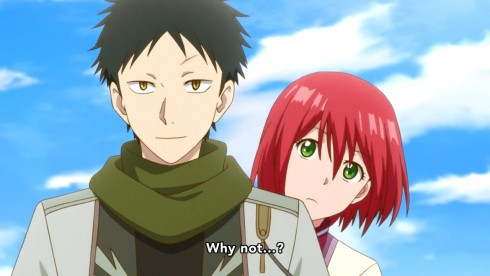 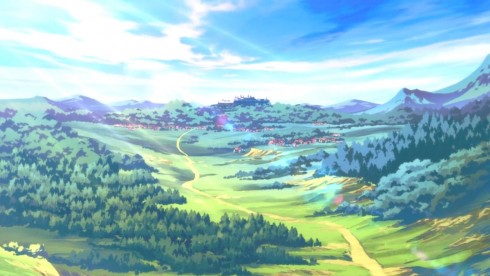 I think for Akagami no Shirayuki-hime to actually turn this second cour around, it needs to dedicate these last three episodes to those characters that its been neglecting for too long of a while. It needs to focus on Kiki, it needs to breath more life into the likability of its cast of characters and its immersive, calming world.

And If I were to put it succinctly, Akagami no Shirayuki-hime just needs to be itself. It needs to trust in what it is, what its always been, and if it does that, then I truly do believe that we’ll be in for some of the strongest episodes of the second cour, and even the series as a whole. Here’s hoping I’m right. 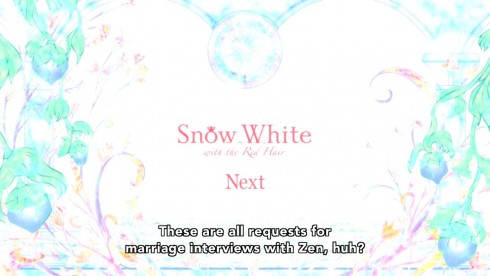 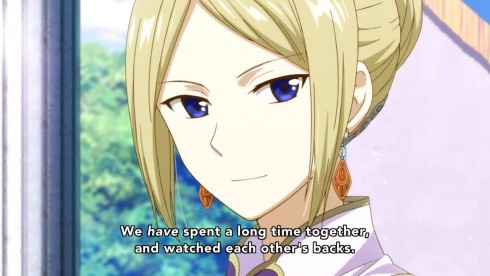 Seems like we’ll actually dive a bit into Kiki next week. Dare I hope?