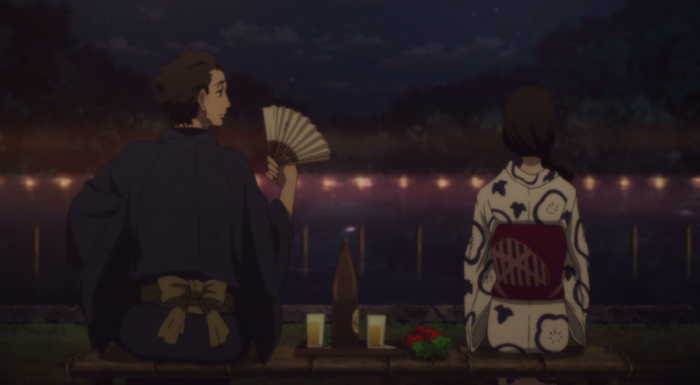 Due to a series of unexpected and slightly ridiculous events, I wound up handwriting this in the back of a car between bouts of motion sickness (#XtremeBlogging!), then quickly typing it up and posting it via shaky hot-spot WiFi. As such, it’s a bit scattershot, but I’ll do my best to keep it organized as we chat backgrounds, priorities, and shifting relationships.

After spending a whole lotta time firmly rooted in Kikuhiko’s perspective and developing opinions about others based on the way he sees them, we at last get some direct back story from our two supporting players that offers us our first real glimpse into the histories, hopes, and fears that have influenced and continue to drive them—and they’re not as different from our dour protagonist as you might think. Let’s tackle this trio with some sub-heading topics! 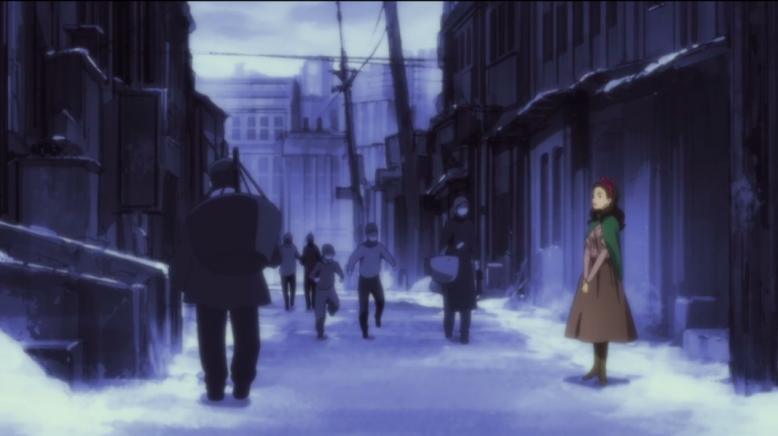 Miyokichi and Kikuhiko have very similar backgrounds, as they were abandoned by others, taken in by Yakumo, and are now working to carve out a place where they can feel at home (which may be one reason they were attracted to each other in the first place). This leads them to, arguably, lock themselves into situations and relationships where they allow others to control and define them, giving up portions of their freedom or happiness rather than fight back and risk losing everything. Miyokichi settles for “cold men” because it’s better than being alone, and Kikuhiko obeys the masters because it’s better than losing his place in the rakugo world.

That said, for all that they share some similar backgrounds and motivations, they also go about it in very different ways. Where Kikuhiko has retreated inwards, reluctant to show affection or develop ties and placing more importance on the place called home rather than the people who inhabit it, Miyokichi falls hard and fast for others, hoping her devotion will be enough for them to stay with her. Look no further than their twin admissions about being alone (“I don’t ever want to be alone” vs. “I’d rather be alone”) to see the mirroring at work here. 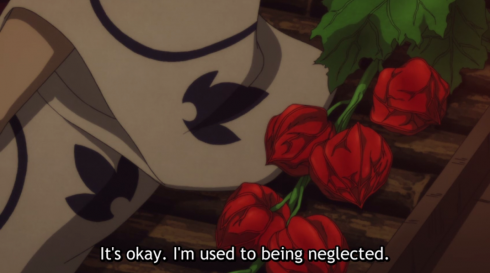 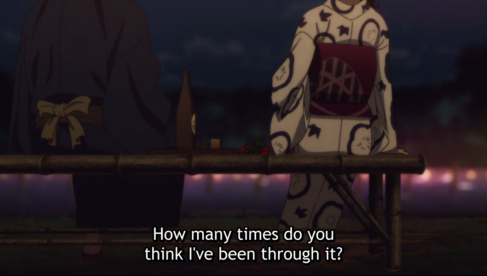 The gulf between the two and how they handle relationships is somewhat hilariously encapsulated by the world’s most halfhearted love triangle. When Sukeroku pulls Miyokichi to him, the music SWELLS FRANTICALLY to reflect Miyokichi’s own turmoil, and I simultaneously laughed and grimaced at SGRS‘s uncharacteristic shift from understatement to melodrama. That combination only grew when Kikuhiko oh-so-conveniently stumbled upon the two, and… didn’t really react to it. The music quickly subdues itself and the drama! evaporates. He wouldn’t have interrupted them if it didn’t bother him at all, I think, but then he goes out for a drink with Sukeroku as if nothing has happened, and that’s pretty much that.

Kikuhiko claims he likes Miyokichi (the word he uses is suki and I respectfully disagree with the translator’s decision to use a term as strong as “love” in this context) and the idea of breaking all ties with her clearly upsets him, but I also think you’d be hard-pressed to make an argument that they’re a good couple. Even without the issues of social status and who’s considered a “proper” match (I talked propriety last week so I won’t do it much here, but it’s still a big, big deal), it’s hard to imagine that Miyokichi’s distaste for rakugo coupled with Kikuhiko’s discomfort with affection would end well for either of them. I think there’s still something to be said for Kikuhiko’s reasoning being a sad mess here, but it’s probably a good idea in the long run that this end now rather than later.

The Parting of the Ways 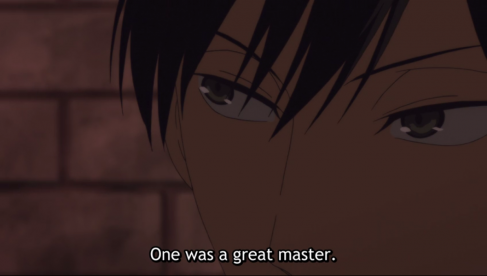 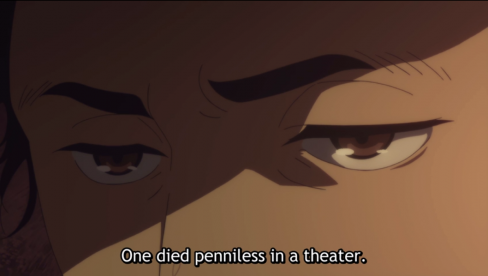 Then there’s Sukeroku, Kikuhiko’s seemingly straightforward and “simple” counterpart who lets his happy-go-lucky mask slip to reveal a young man with his own complications and anxieties. The loss of his old mentor has stuck with him and motivated him going forward, as he’s fought to not “die penniless in the theatre” the same as the first Sukeroku did. This gives him one more point of contrast with our other characters, for while both Miyokichi and Kikuhiko were chosen by the master, Sukeroku did his own choosing, intentionally seeking out Yurakutei Yakumo to further his own goals.

It explains why he’s less respectful to Yakumo, as the master wasn’t his savior so much as the means to an end (i.e., getting his foot in the door of professional rakugo). Kikuhiko changes himself to please the people who become his family, but Sukeroku feels no need to do the same. I think it’s still about wanting to be wanted, to some extent, but Sukeroku only needs approval from the audience (and arguably Kikuhiko). He thinks he doesn’t need to be accepted by the other rakugo-ka, and in fact may even feel bitter towards them given the way the first Sukeroku was rejected. It’s no wonder he rebels as much as he does, just as it’s no wonder Kikuhiko conforms as much as he does. 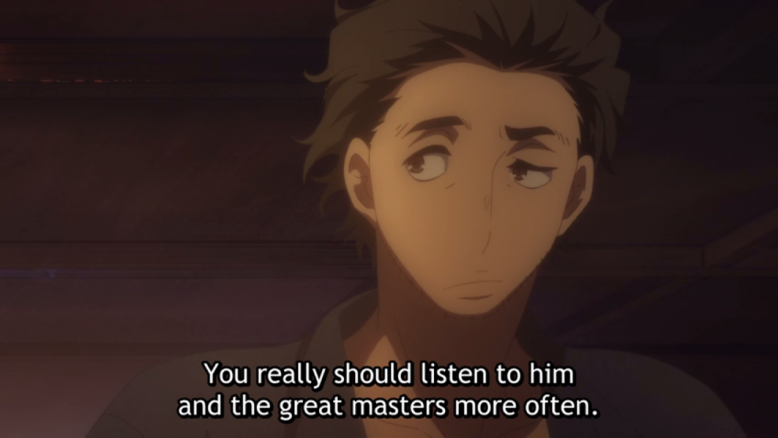 This split also manifests itself in their on-stage goals and that promise to keep rakugo alive both in a traditional, unchanging and a dynamic, modern form. There’s value in both preserving a culture and in updating it to match modern sensibilities, so I don’t think either is incorrect in where they want to take their rakugo. Actually, I found myself constantly thinking “I don’t think either is incorrect” in this episode—I’d say the real issue and building sense of tragedy have a lot more to do with a lack of balance.

It’s probably a good thing that our rakubros (nickname, you have been coined!) decide to strike out on their own for a time, as neither is ever going to properly grow up with the co-dependent relationship they have now. Sukeroku needs to learn how to deal with off-stage concerns and Kikuhiko needs to break out of his friend’s on-stage shadow. That “suffering” (which is as loaded with subtext as any of their interactions) he speaks of has been chipping away at their relationship for a long time, and they won’t be able to resolve that as they are now. 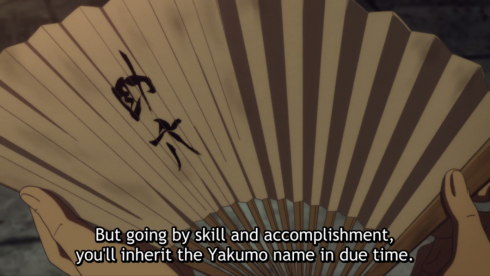 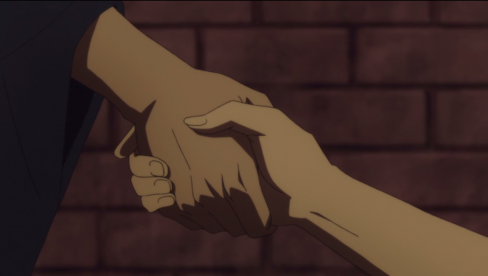 Kikuhiko says he’s worried about Sukeroku, but he also has tremendous admiration for and confidence in him, so I think he honestly believes Sukeroku will shape up once he has to and will be just fine. He always speaks of his friend’s rakugo as superior to his own, and speaks of the master passing his Yakumo title on to Sukeroku as if it’s a given. I’m less certain of that. While I appreciate Sukeroku’s willingness to challenge the status quo, the master also bent over backwards for him this week in order to get him promoted to shin’uchi, and Sukeroku doesn’t seem to realize or respect that. He’s woefully oblivious to the importance of professionalism, and to how hard both Yakumo and Kikuhiko have worked to keep him in the business. He may soon be in for a rude awakening. 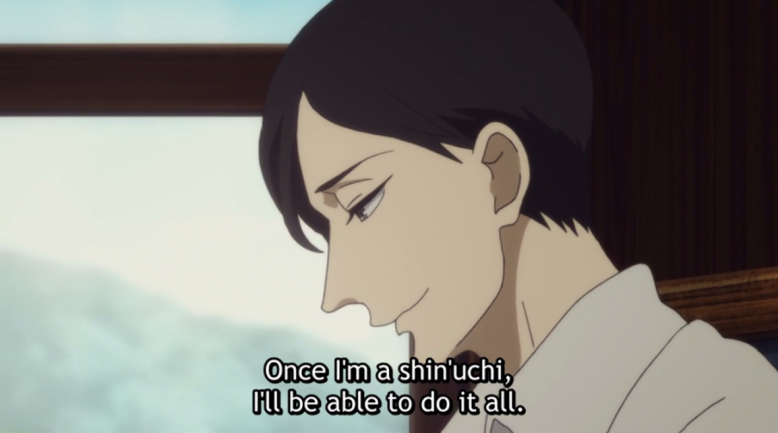 While Miyokichi makes herself miserable in an attempt to maintain even shallow personal relationships and Sukeroku gathers a fanbase while alienating the other performers, Kikuhiko decides to give up anything that could stand between him and success in rakugo. In some ways, I can’t really fault him for his choices this week: If rakugo is more important to him than Miyokichi, then he should break it off with her, and if Sukeroku’s presence is as painful as he says it is, then putting some distance between them is a healthy choice. There’s nothing wrong with wanting to be alone. The question is whether that’s what he actually wants, and I’m not sure even he knows the answer that.

Kikuhiko freely admits both that Yakumo’s orders regarding Miyokichi are “not right” and that he’s happy when he’s with Sukeroku, but he separates himself from them anyway. I think a lot of it comes down to insecurity: He still doesn’t have the confidence to think he can succeed on his own merits, so he obeys his master and plays by the rules to stay in the game. He decides that the performance is the most important thing—being on stage, earning his way—and that he’ll give up anything that might hamper that. So he cuts his personal ties for the sake of professional ones. It’s not that he doesn’t care about them: It’s just that he’s decided he cares about rakugo more. 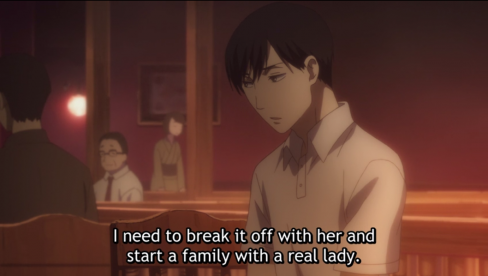 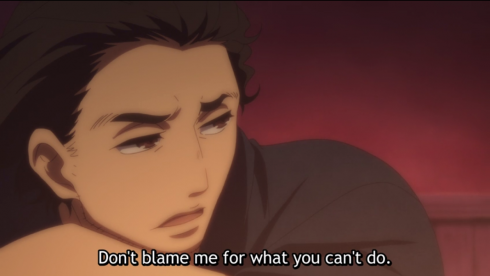 And again, I don’t think choosing your career over your social life is inherently a bad thing. I just worry that Kikuhiko is going to come to regret it, and we’ll discover that all three of our characters needed each other a lot more than any of them realized.

Boy, watching Showa Genroku sure can be an exercise in empathy, and there are times when I struggle to know whether to shake or hug our flawed, struggling cast. Is Kikuhiko a respectable pragmatist or a subservient coward? Is Sukeroku a free-thinking pioneer or an irresponsible ingrate? Is Miyokichi a perpetual doormat or a survivor desperately trying to carve a place for herself in a world that defines her by her relationships with men? Well, yes. And no. And lots of in-betweens. And it’s those in-betweens that make their choices “not incorrect” even as they continue to hurt themselves and the people they love. It’s genuine, yes. But it ain’t always easy to watch.