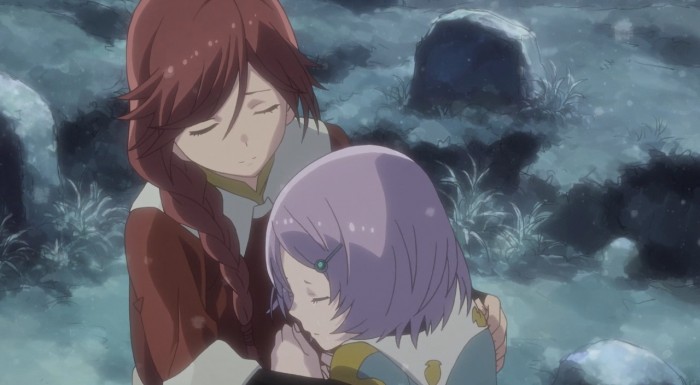 Just wow, this show really did get me this week. Was drawn in by the showdown with the goblins, the aftermath, and even the Haruhiro and Mary scene at the very end. This series has been a remarkable one for consistency and this episode was no different. It really did get to me and has made writing this a bit trickier for that reason XD. Nothing bad I could say about anything in this episode. At least from my point of view, it just nailed it. This was the big showdown for this group. The enemy that broke them emotionally and took away a close friend. The episode just flowed nicely. It was a bigger battle than I had imagined and yet I hadn’t expected how well they’d handle what came after. Meeting at Manato’s grave and even delivering his official badge to him. Not sure how common this is, but I’m glad they did it. Manato was one of them and even if he’s gone, he deserved to be acknowledged as one of them even now. 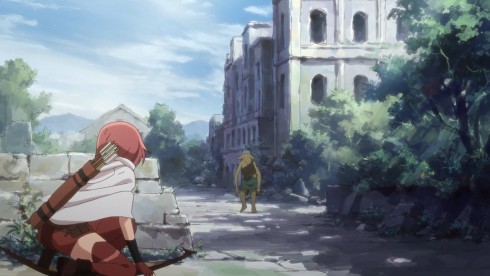 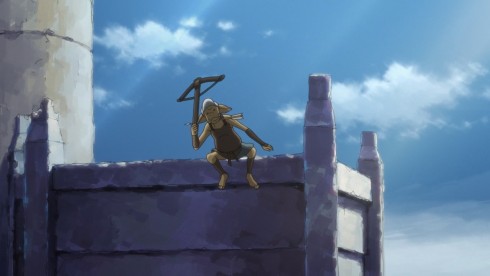 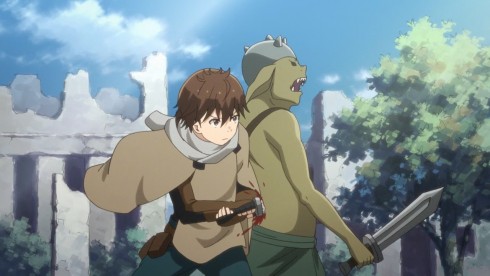 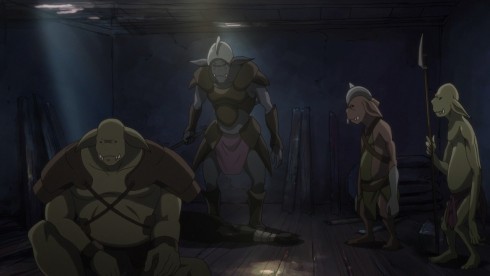 This showdown definitely lived up to expectations. I expected them to fight like 4-5 goblins, but there was actually quite a few in that building. Still, this was a pretty darn good strike. They took care of the outer guards and then moved on inside to take out the rest. It wasn’t a perfect attack though. Yume took out her goblin quickly, but Haruhiro didn’t get his down quickly. If he had gotten that goblin in one shot then the alert isn’t raised and maybe they get a few more ambushes inside before the full brawl breaks out. But, that’s just how life goes. They can be as prepared as possible, but it’s impossible to foresee everything. Haruhiro is improved, but he isn’t perfect. They got one of two quick kills, great but not perfect.

The fight inside was pretty intense. It was quick paced and moved from area to area. They had to fight fast before they were stuck brawling on the stairs and giving the goblins the high ground. Getting up to that second floor was key, even if it did turn into a tough fight from that point onwards. Goblins are freaking scary. Soldiers might look down on them, but these things are clever. They know how people fight and they can fight with teamwork of their own. Props to Ranta who got into a fight with a couple goblins and was doing alright…minus some issues. I mean, he was too obvious in luring in the goblins. Something that would be fine against animals, but clearly goblins have intelligence and some culture. You have to be smarter than that. 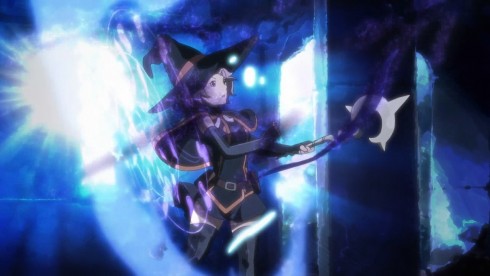 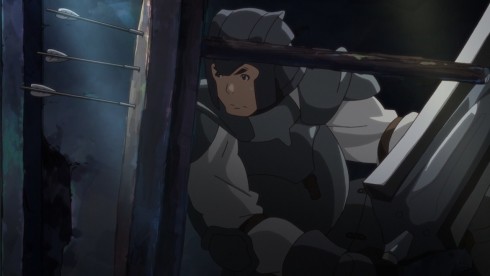 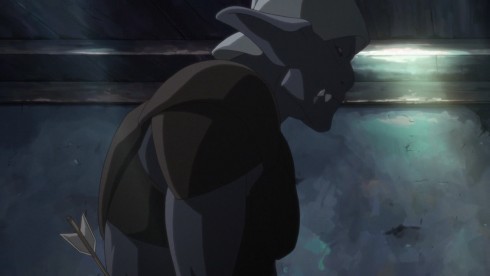 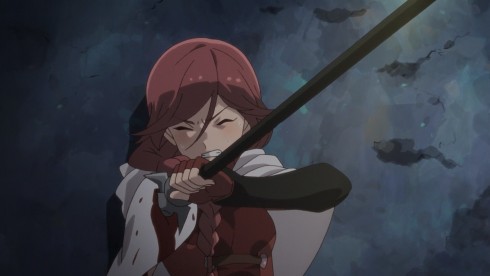 Just so many good elements to this fight. Yume getting her shot in on the leader goblin. The guy barely flinches from an arrow to the side. That had to hurt. But is nice that Yume has gotten more confident with her bow. Even if the fight did turn into a close combat brawl, she fought well. Haruhiro and Yume are hardly the duo you’d imagine to take on a leader enemy, but they fought well. Those two showing their teamwork and trust. It was painful to see Yume getting speared in the shoulder. Of course it’s not crazy either. She is a front line fighter when she’s not firing arrows and that kind of hit is possible. Haruhiro was too distracted by Moguzo’s fight and Yume took a hit as a result.

Moguzo had a very tough role fighting that larger one. A battle of the tanks to a degree. Better though than the fight they had before. Moguzo knew that he had to hold this guy. If not he could cause havoc and beat his allies down to the ground. Some nice backup by Shihoru. Though her first spell wasn’t as effective because the goblins know it’s important to wake up a sleeping ally. I do think she deserves credit. Someone who has hung back for most the fights (due to her position) rushed forward and risked injury to secure her shot. 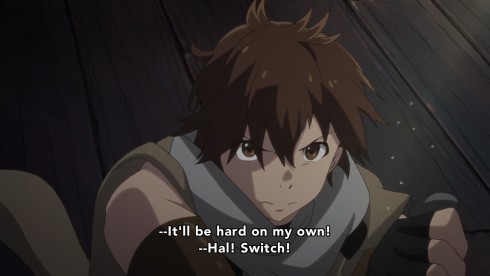 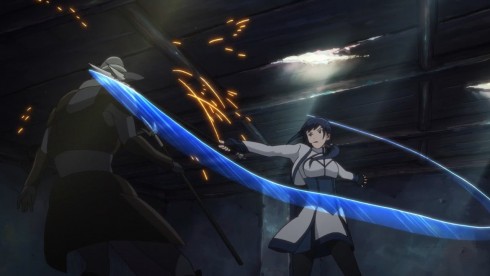 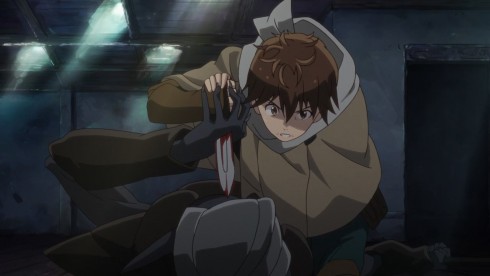 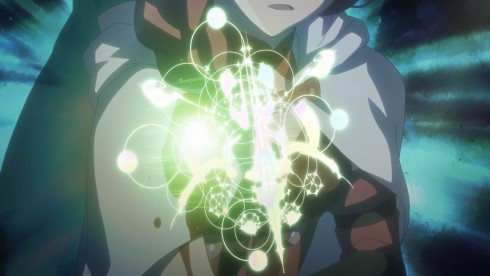 The great thing is that even though the main cast has improved, they did make mistakes still. It’s just mistakes that didn’t cost them a life. Haruhiro distracted by Moguzo getting struck, Ranta failing to lure in the goblins which left them able to help their sleeping ally, Ranta again getting distracted by Yume getting hurt and rushing forward. They also fell for the ploy by the goblin leader. A very cinematic move really. The bleeding leader sitting by his chess board (goblins play chess!?) while an assassin hangs up in the rafters to strike Mary from behind.

But the group manages to survive that. Yume gets a shot in on the goblin leader who tried to take advantage of the confusion and they do bring him down. When Haruhiro was left fighting the goblin leader (after Yume’s injury) Mary moved in. She didn’t rush to Yume mindlessly, but backed up Haruhiro in the fight. She is a healer who fought with her allies against tough enemies, that is something she could handle. Even the goblin after Mary’s attack looked like “wtf?” since she is so much stronger than one would expect a priest to be. Just a brutal fight as well with Haruhiro stabbing and rolling around with the goblin leader. The guy blocking the knife with his own hand….just the fights in this show hold nothing back.

Mary’s experience saved the day really. She looked around at who she needed to heal and rationed. Yume couldn’t fight with such a wound to the shoulder and Moguzo needed healing to hold the front lines. But she saved enough and that left her with magic to save herself from of course a similar wound that Manato had. 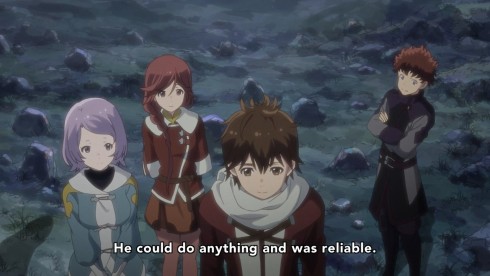 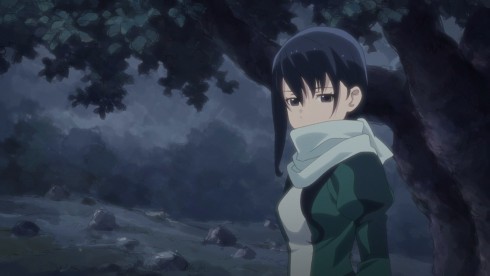 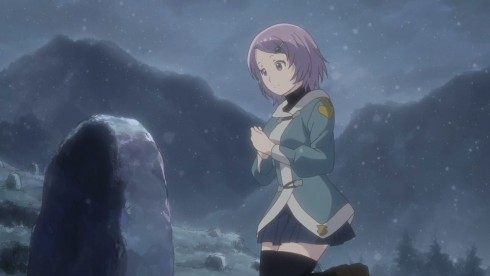 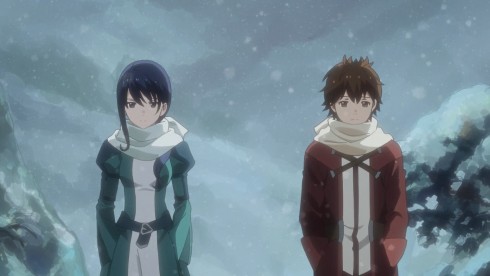 But even outside the action scenes it was the character moments that shined here. Like that little fist bump with Haruhiro and Yume after all was said and done. That connection remaining strong even now. Also the group huddle before the fight was quite fun. Even getting the surprise nickname for Haruhiro from Mary, showing how far she’s come since they met. But honestly that whole scene at Manato’s grave was really something. Mary standing off to the side, showing that there is still that distance. Especially when it comes to Manato’s death, it’s hard for her to be part of the group in something like this since she never met the guy. It was a moment for the rest of them. To stand there and say that they managed to avenge him and now they have become a good party. One that can survive a fight like this and one that can call themselves full-fledged volunteer soldiers.

I really did like them giving Manato a badge. He is part of the group, even if he’s gone. It would just feel wrong for him to be left out like that. A good way to say that no matter what Manato is one of them. He may be gone, but they remain friends and comrades. Some nice things said and of course some grieving done as well. None of them can just forget Manato, not Shihoru, not Haruhiro, not any of them. So of course there is some crying and feeling the loss, but it’s something they all have to live with. Avenging Manato was something they had to do, but it doesn’t change the fact that his death hurts and will continue to hurt. 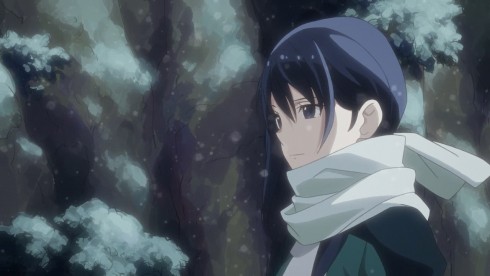 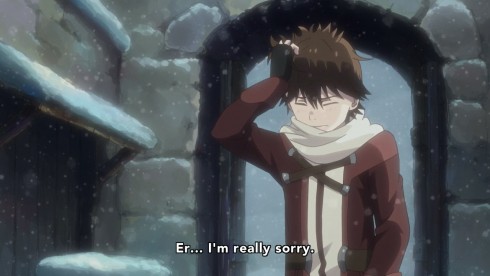 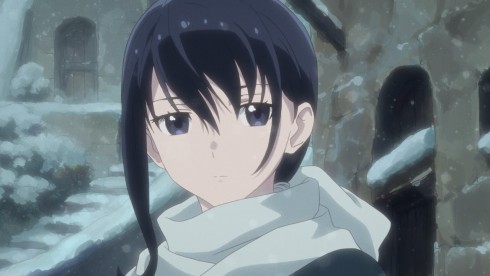 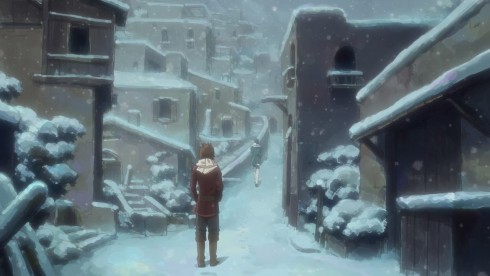 Though will just say wow to the whole Haruhiro and Mary walk and discussion. If you want some potential flags being waved around, it’s with these two. Definitely a strong dynamic going on there as everyone just started to drift off. Leaving Yume to take care of Shihoru for the time being. That music is just unfair leading into that kind of scene. I know it’s the ED, but geeze guys XD. Small discussions showing that both are growing and that bit by bit Mary is opening up. I do think it was needed for him to admit to her that they did peek into her past. Otherwise she might feel compelled to just tell them the whole story herself.

Just little moments that I liked in that conversation. Kind of silly to ask if her injury was ok, she more than anyone can take care of that kind of pain XD. But it’s the other stuff that is harder. Damage to her outfit (holes and blood) and the pain all of them are carrying emotionally. She lost so many friends and Haruhiro’s group lost Manato. All of that hurts and it’s hard to measure really. Mary lost more people and as the healer perhaps felt the inability to save them more than most would. But it’s still painful for everyone.

I’m just going to dive into this as a “well that’s definitely got shipping to it” point of view. The nickname bit was fun and I wonder if Mary really just hadn’t even thought about it until now. Maybe she was the type before who did nickname all her friends and her giving one to Haruhiro just reflects how she is letting her old self out more. Though it wasn’t a big one, they did finally get a smile out of her too. In the end it is kind of funny that their biggest worries after that fight is outfit repairs XD. I do wonder about the long term when they might invite Mary to actually live along with them. She’s probably living in better arrangements, but be nice to remove that literal distance that exists right now. 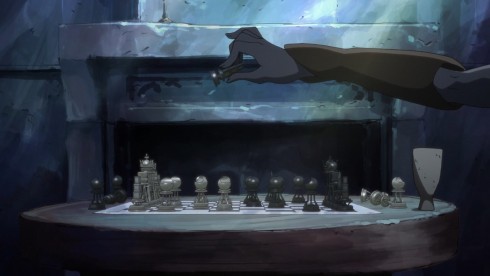 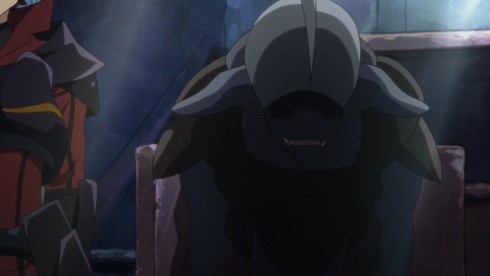 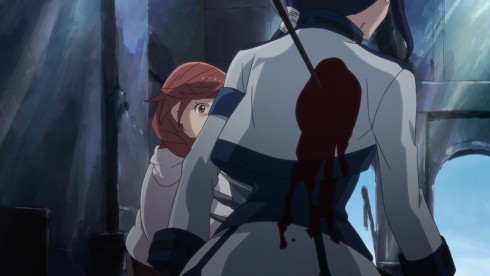 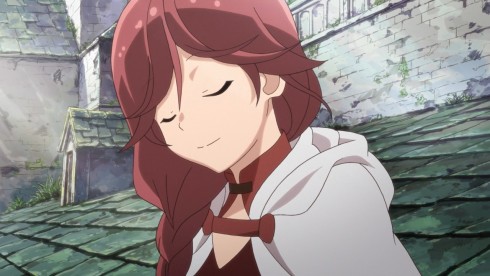 As one can tell…this was a darn good episode. Just full of emotions and one that I had to go into full detail on. Praise be to anyone still reading at this point XD. This episode is definitely one of if not the best to me so far. It brought the action, the intensity and the emotions. I don’t know where we go from here for the rest of the show. But I’ll just be glad to enjoy the ride until it ends.