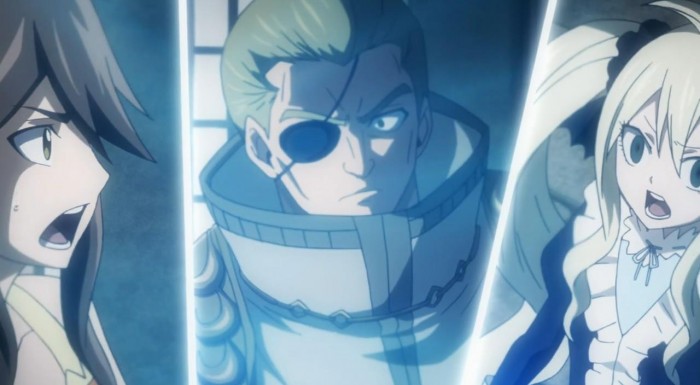 Near the end of Fairy Tail Zero, things definitely seem to be turning out to be a lot more standard than I’d have thought. The story is done with its big surprises, and its provided a fun journey, but now… Now its all about the last challenge that the founding fathers and mothers of Fairy Tail face, right before the creation of the guild itself. 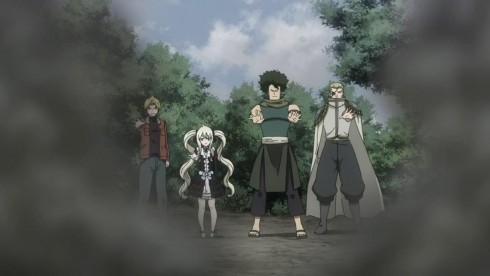 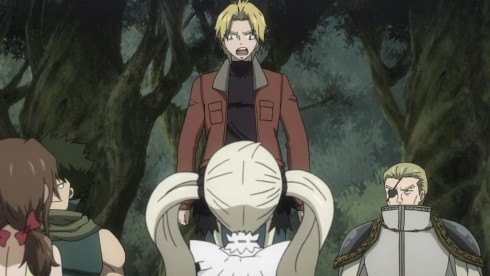 Its somewhat interesting, at least to me, to find that the actual plot point to get Mavis and co to push themselves beyond their limits, is something more stereotypical, than say, an all out war with Blue Skull. Personally, I would’ve liked the show and the story to have gone the fairly straight forward route of having Mavis and her new found comrades just take down Blue Skull. While Blue Skull was never built up as this amazing antagonistic force that the heroes had to take down, it had definitely been orchestrated as “the obstacle” of the story.

Yet, this week’s episode almost changes direction entirely. Mavis and the rest are able to take down Blue Skull with relative ease, even if the way they do it, is a bit hard to believe. See, as a viewer and a fan of these characters, I really just wanted Mavis and the rest to use their new found powers and their seasoned smarts to take down the evil mage guild, in some kind of weird but clever way. 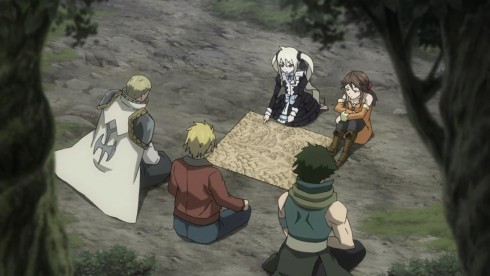 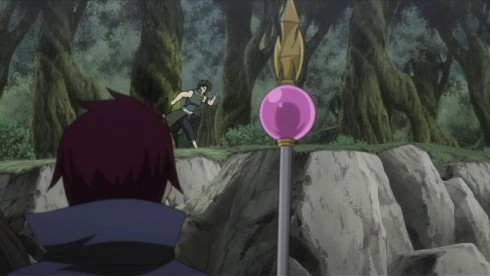 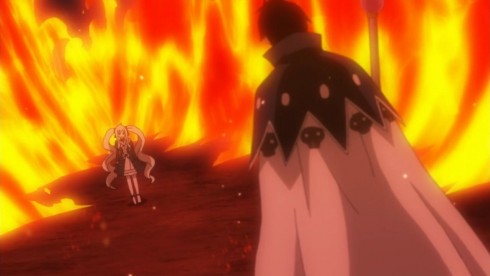 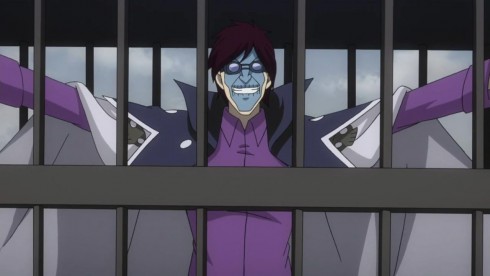 Instead, what we get is Mavis basically luring Geoffrey, into a trap, by using her illusions. Yes, its impressive that Mavis can create a whole town with her illusion magic now, however, what makes utterly no sense is why Geoffrey is just trapped in a friggin cage, and is taken down because of that. Is the Cage some kind of anti-magic cage? If it is, then maybe I could see it, but there are absolutely no hints or even inclination to that particular idea in the actual episode.

What’s to stop Geoffrey from just blasting away the bars? I mean he’s a Guild Master, and one that Mavis and the rest didn’t want to fight directly. So a friggin steel cage is enough to take down this almighty mage? Yeah, I don’t think so. 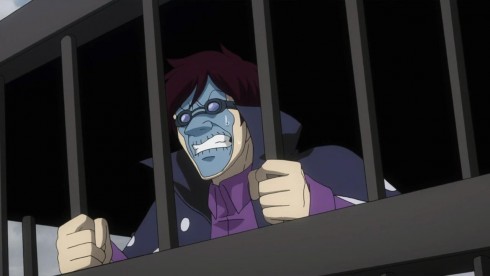 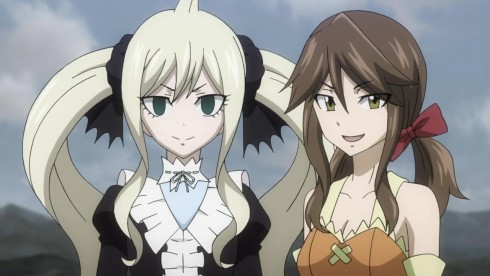 As to why this all happens the way it does? I feel like Mashima-sensei may have just lost interest in the story at this point. Okay, maybe that’s not fair, but we know that he’s capable of writing some fairly deep and intellectual scenarios. I mean, the whole battle of wits between Yuri and Mavis at the start of this arc was awesome. Instead of something like that, which is what I thought we would get, we get Geoffrey being lured into a cage, and trapped like a dumb animal instead.

Plus, I think another reason this whole scenario goes down the way it does, is because of one of Mashima-sensei’s more controversial habits boiling back onto the surface of the story. See, Mashima-sensei, as a writer, is all about creating characters that aren’t TRULY evil. Every character is redeemable, misguided, or has just had some kind of situation that turned them into who they are. That ideology has worked to Fairy Tail’s favor a bunch of times. Jellal, Laxus and Gajeel, some of my favorite characters in this franchise are a result of Mashima-sensei’s odd tendency to reform villains, and to do the whole: “Not everyone is evil” thing. 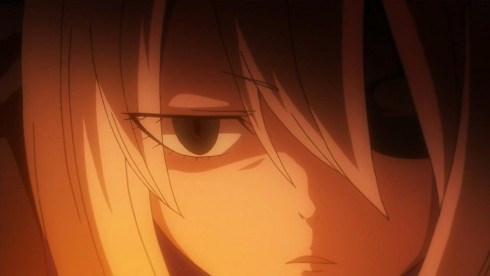 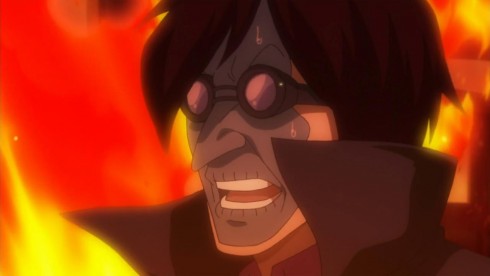 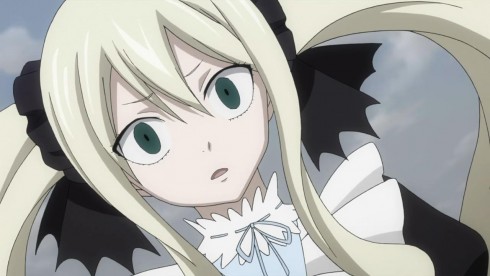 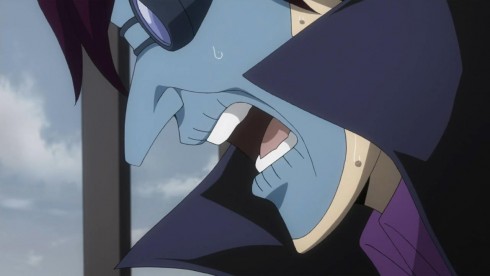 We see that again, with Geoffrey this week. Yes, he’s a selfish, self-absorbed conqueror, but even HE doesn’t want to obliterate the town’s people. When he realizes that Mavis and co might be on a path to ruin, he does warn them, rather than try and let them take themselves down. While he’s not entirely reformed, there’s just a sense that Geoffrey isn’t an entirely terrible dude either… And that kinda doesn’t work for me.

The problem here, at least for me, is that Geoffrey is just one of those characters that doesn’t need redemption, or even depth. He’s been positioned as a villain, one that’s just there for Mavis and co to take down and then move on to create Fairy Tail. I guess, I just wonder why he couldn’t just become what he was supposed to? Geoffrey becoming the last boss wouldn’t have been entirely original, but at least it would’ve felt consistent. 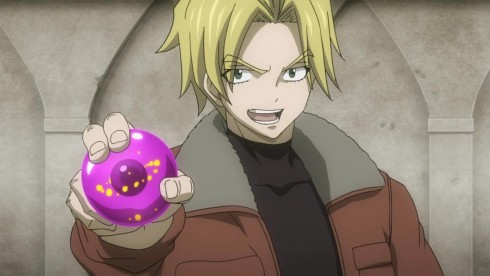 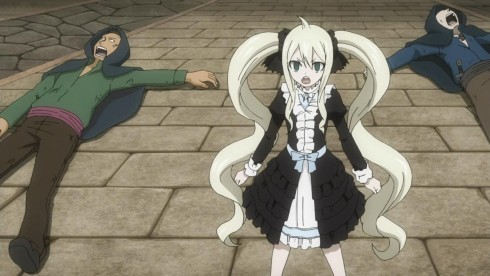 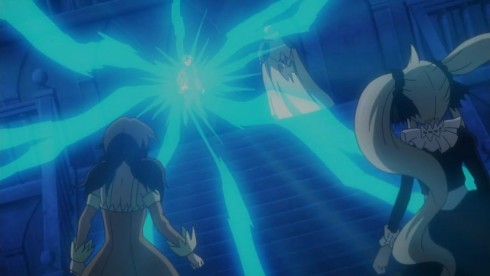 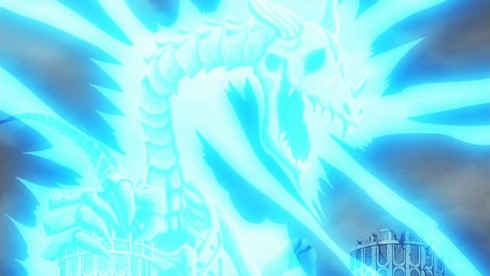 Instead of that, we get your typical fantasy adventure scenario, one where the Tenroujade is actually some kind of cursed item, and it ends up going haywire. Yuri ends up squabbling with Mavis, because he’s got that little bit of stubbornness in his personality, and ends up being thrown into the giant Dragon Skeleton on top of the Cathedral as result.

I see the intent here, in that its supposed to be kind of a moment where Yuri’s immaturity lands him in an entirely horrible situation, and its Mavis that ends up getting him and the rest of them out of it, forever cementing the bond between all of them. Yet, I dunno, the whole story just feels so cookie cutter and just kind of average. 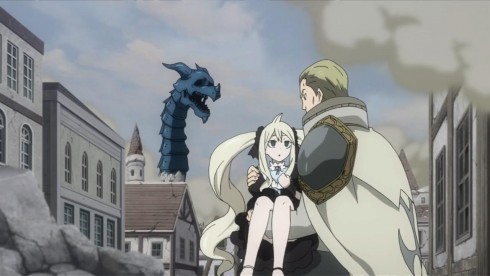 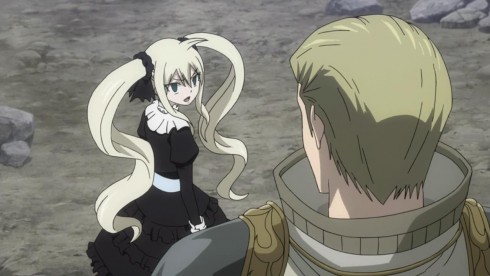 If a story is going to change things up and diverge from whatever its been building up to, then it has to do something unexpected or original at the very least. The whole “magic cursed item creates a horrible situation” idea is just so generic, that I almost wonder why the story couldn’t have just stuck with a Fairy Tail vs Geoffrey scenario, and just have had whatever tragic situation is going to happen, happen there.

Maybe there’s a larger point to it all, maybe there isn’t. I just know that in a few ways, this week’s episode showed the story kind of regress back into “okay” territory. Which is said, especially after last week’s impressive and expectation exceeding stuff. The story now is heading to a kind of general conclusion, one that you can just kind of see coming. Mavis will do something to save Yuri, she will succeed, and I think that whole process is going to result in Zera’s whole situation coming to light as well. 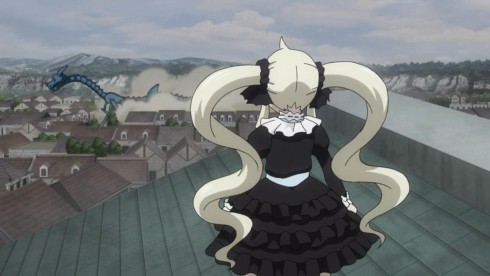 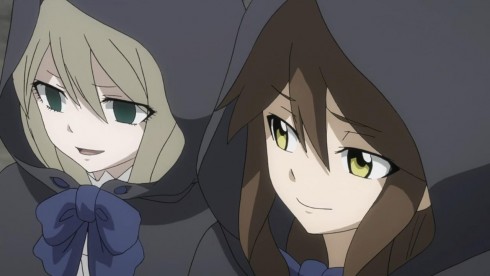 Its just kind of boring when there’s no sense of surprise to all of that. When the events do transpire, the emotion won’t feel genuine because of all the issues we’ve had with the whole Zera subplot anyway. I may be greedy, but I was hoping for more of the kind of stuff we got when Zeref made his appearance in this story, or when Mavis herself was introduced.

I suppose that’s hoping for  far too much from a prequel story that was fairly short and quick, even in its original manga form. In any case, I guess this episode was serviceable, it was  definitely decent. That’s still not entirely bad, and its leagues above anything we’d have gotten instead of Fairy Tail Zero. I guess in Fairy Tail Zero’s case, the journey is a lot more important than the destination, and definitely a lot more fun. 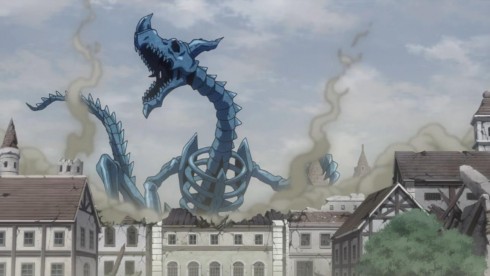 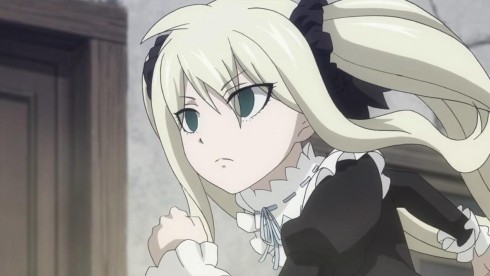 Okay, I can see there being one more cool moment before Fairy Tail Zero and Mavis bow out, and its a bit tragic that the Episode Preview + Next episode’s title just kinda let the cat out of the bag. I’ll see you next week!