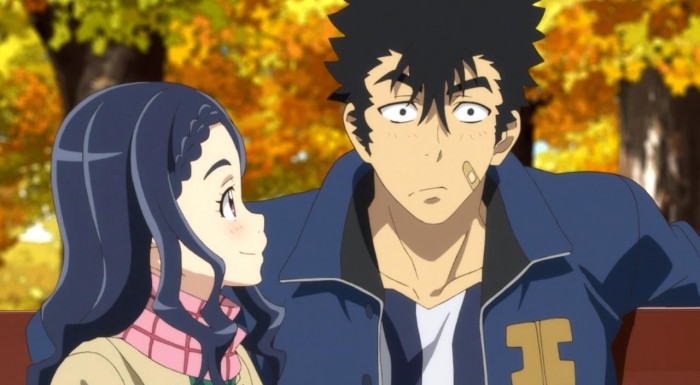 Man is Dimension W in a serious hurry to get somewhere. This week’s episode undoubtedly delivered the goods, but in a way that felt oddly compressed, too quick and too brief for comfort. Despite Dimension W’s rather strong premise, world and characters, it feels like the story and the adaption  is getting the shorter end of the stick simply because it just doesn’t have enough time to tell its story properly. 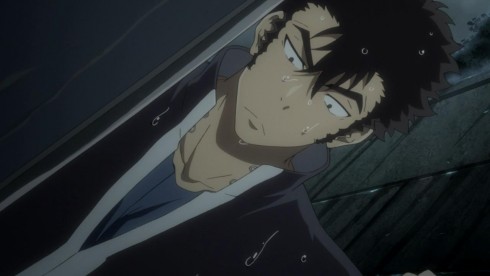 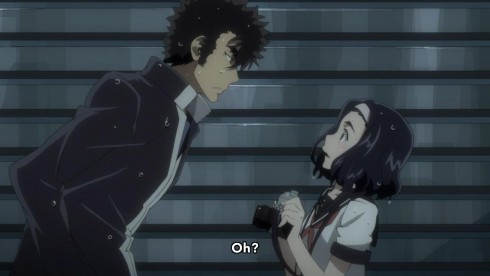 The places were I think Dimension W feels overly rushed, are always related to flashbacks. We saw it in the Haunted Resort arc a few episodes ago, where Sakaki’s storyline felt like it was over long before even the characters began to settle in. Kyouma’s own backstory pretty much mirrored Sakaki’s, in that it was waay too quick, disjointed and rushed, and killed some of the emotional momentum that a story like that benefits from with some decent resting points.

As a larger concept, the overall tragic story of Kyouma and Miyabi is great. It works very well, but I think the show relies too much on the audience to get the picture and connect the dots, rather than create a story that invests and emotionally grips the viewer. Miyabi is a sweet girl, and her pairing with Kyouma is heart warming, from what little we see. And make no mistake, its miniscule, because the story cuts from Kyouma and Miyabi’s first meeting, to them being a couple, to Miyabi’s disease, to Kyouma’s whole career change and then finally to Kyouma’s lapse in memory and the loss of Miyabi. 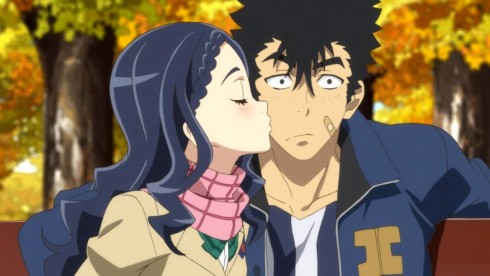 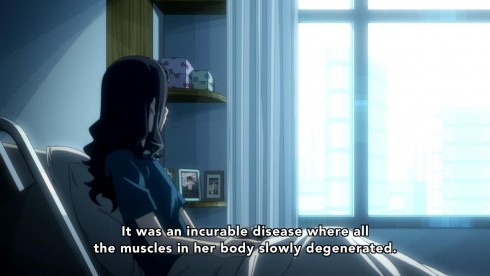 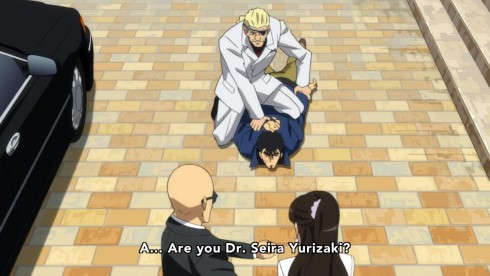 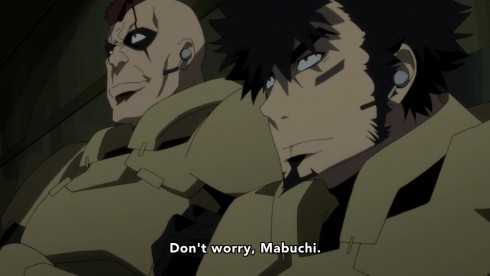 The production staff, the adaption and the anime in general does its very best with what little time it has, and there’s just enough information and powerful moments to at least UNDERSTAND Kyouma. But I keep seeing this whole situation as such a missed opportunity. Its beyond clear that there’s too much manga content being crammed into a single episode, because Kyouma’s entire backstory is over by exactly the episode’s halfway point.

It really does feel like Kyouma’s backstory demands an entire episode, just like Mira’s story did. I really wanted to see Kyouma and Miyabi bond, to grow together as a couple, and to really begin to care for them. It would make the whole moment of Miyabi’s eventual disease twist, all the more painful and heartbreaking. And then of course, there’s Kyouma’s search for saving his girl, which is solved in a matter of seconds and thus doesn’t really communicate his desperation all that well either. We’re left to infer that Kyouma just happens upon a solid deal, and then things go really well for him and Miyabi for a bit, as hope returns. 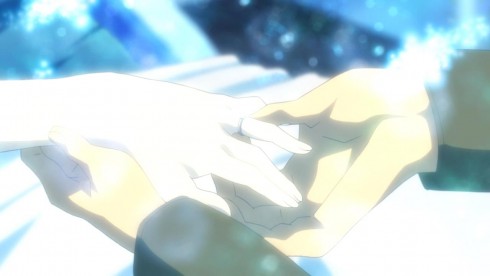 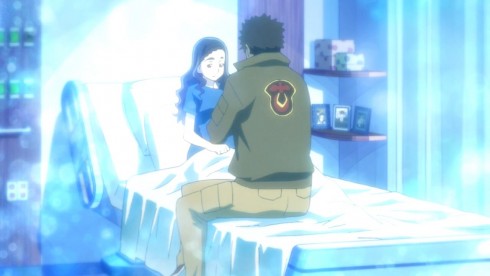 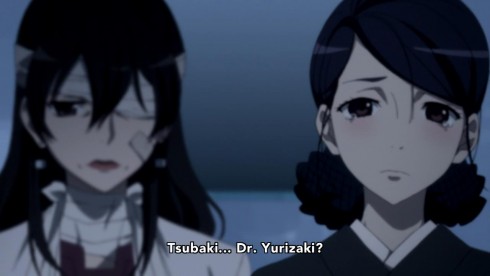 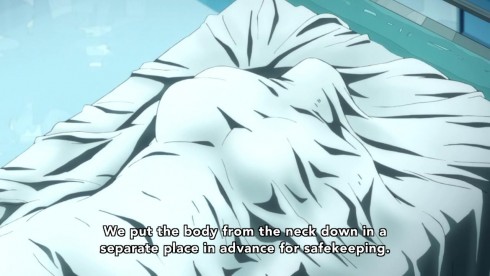 Then in the very next scene, we see Kyouma entering the Island, and then we cut to Miyabi’s death scene. I think what really just brings the disappointment down like a jack-hammer is the fact that there’s so much good stuff buried in this quick retelling of Kyouma’s past. There’s the whole idea of how Miyabi’s head was “lost” and her seeming similarities to Mira (Especially now that we’ve seen both characters in the flesh). There’s Kyouma relationship to Shido and his wife, which is a pretty huge deal.

Then of course, there’s Kyouma’s actual lost time on the Island, and how he actually ended up surviving when his entire squad was decimated. What does the vision he has of Miyabi have to do with it all? Its all so complex, interesting and confusing, that I can just see the importance dripping all over the place. 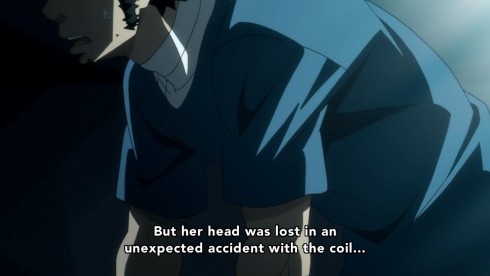 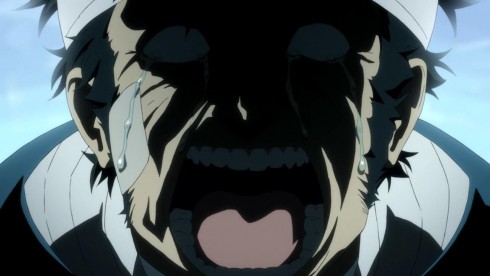 Yet it feels like Dimension W itself is more interested in the present day events than it is Kyouma’s past. It definitely feels like Kyouma’s past is just kind of jammed into the episode, if only because it provides some serious context into whatever is actually going to happen on the Island.

And to be honest, while its nice and competently done stuff, the present day stuff suffers from a lighting fast pace as well. There’s so many new characters that are just kinda thrown at us, in what seems like a pretty complex and long story arc, and we have a few seconds of screen time dedicated to each. There’s hardly even a second to take everything in, before we get to the darn Easter Island itself, and already have all hell break loose. 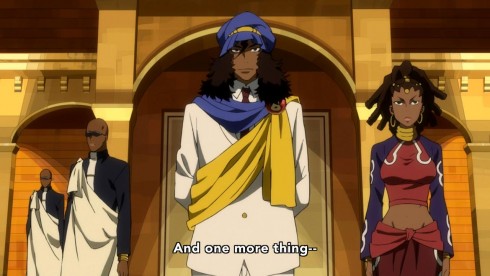 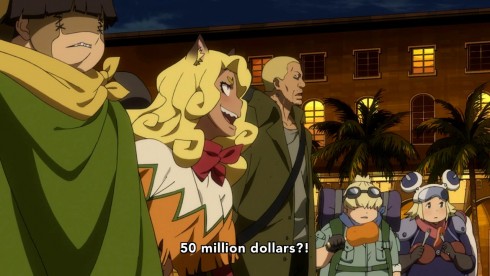 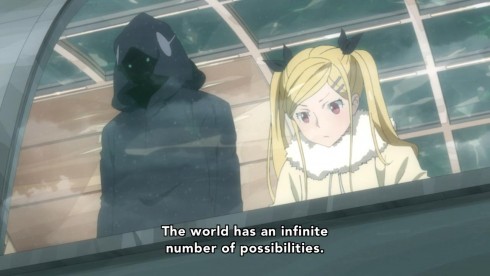 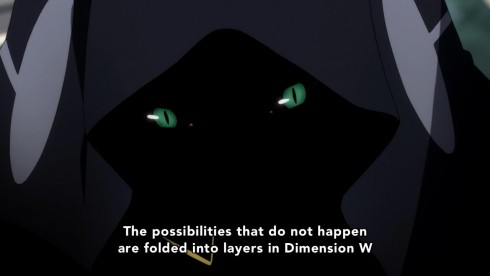 And inside all of that, we even get our first proper definition of what the W Dimension actually is, and its a doozey. The fact that the W Dimension is actually multiple possibilities of reality, all converted into a form of electrical energy is just… clever. Its smart, believable and pretty imaginative, and its a wonder why the series took so darn long to explain this rather simple and elegant idea. Yet it does, and in an episode that’ just overflowing with an overwhelming amount of content.

We also find out about what the Dimension Collapse is, and it happens when all those different possibilities in the W Dimension actually manifest and overlap with reality, changing from pure energy to some kind of abstraction of time and space. Okay… That is a pretty hard concept to just explain, so I guess its understandable that everything relating to this idea of multiple realities and pure energy took about 7 episodes to slowly trickle out. 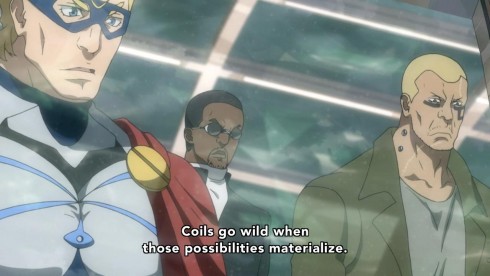 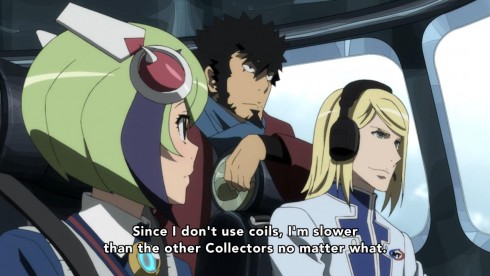 All I can say is that the ideas behind Dimension W continue to impress, in a way that really sets it apart from most Science Fiction stuff in general, let alone in anime. Its a darn shame that this series wasn’t given a full two cours, because this remarkable and brilliant story is really starting to suffer and show strains from its rather limited episode count.

This is actually one of those few cases, where the anime is actually really making me want to read the manga, and get the fuller experience for once. Its with a really heavy heart that I say that stuff, because Dimension W is one of the most impressive looking, well acted, well voiced and well produced anime series airing right now. 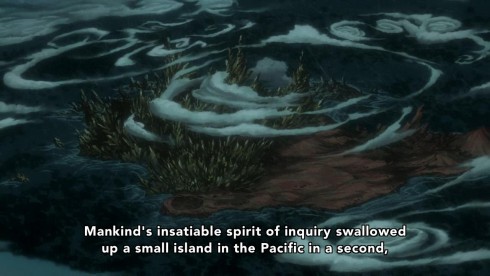 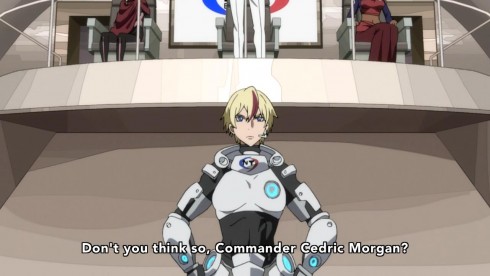 The show needs that extra coat of shiny production value paint to really present its world and do justice to the stellar story and ideas that are contained within it. In a perfect world, we’d have a great story, a great looking show and we’d have more than 1 cour to see it all happen. It seems like Dimension W’s production staff are going into this series fully expecting it to be a one-off, and the priority is on hitting all the right notes, and getting to a decent stopping point.

I can respect that I guess, because the ending of a show is more or less completely ignored these days. At the same time, my mind can’t help but wander off to the ideas of what could’ve been. Ah well, Kyouma’s backstory was a missed opportunity, but its over now. I suppose we’ll have to see where this story arc heads to, and what was so darn important that it rushed there so quickly.

Note: Please excuse any errors (spelling/grammar/tense), since I was running late, I just opted to get the post out rather than check it for errors. I’ll go back tomorrow and fix it up, so apologies for the shoddy experience. 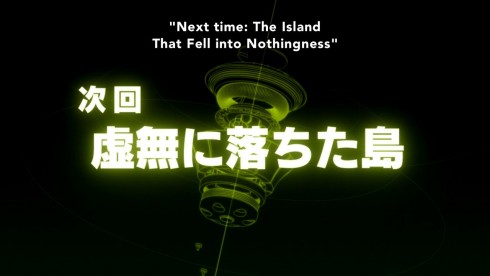 The Island that Fell into Nothingness? Wasn’t that this week’s episode? I cannot read Japanse for the life of me, so I’m not sure if Funimation made a translation error there, or if the episode preview title is just wrong. In any case, see you next week!