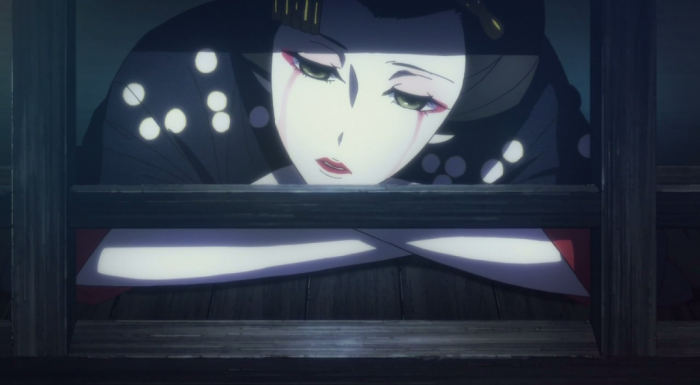 Having at last found his voice, Kikuhiko’s star rises swiftly, as his performances earn him accolades from rakugo audiences and masters alike.  But one person’s success can sometimes be another person’s loss, and the rapid changes occurring this week are as much about unraveling personal connections as they are about tightening professional ones.

There are two major threads running through this episode, best characterized by the words “performance” and “distance.” We’ll start with the first, since it’s SGRS‘s central and most ubiquitous theme. As we’ve already seen, performance is a major part of our characters’ lives, obviously in their work (as rakugo-ka or geisha) but also in the way they behave with others and particularly in the way they navigate gender norms. This week, the focus is on a different kind of performance: Propriety, i.e., the performance of respectability. 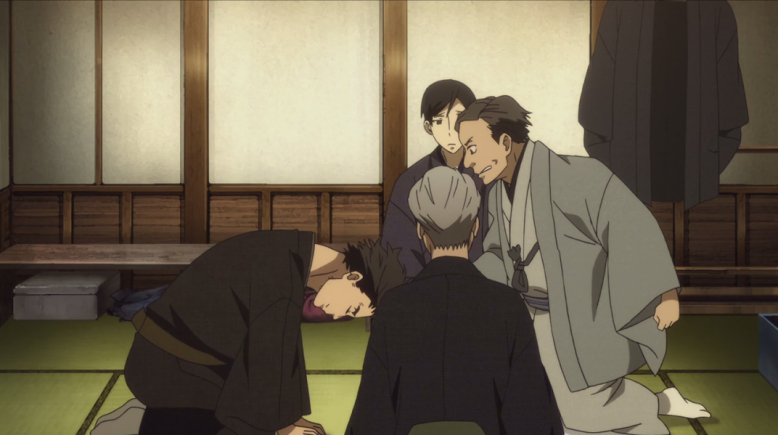 Sukeroku, much like the majestic honey badger, truly DNGAF.

I’ve talked before about how Sukeroku is the rebellious son and Kikuhiko the obedient one, and this split comes to the forefront in all of their professional interactions this week. While Kikuhiko remains the very model of a modern futatsume, Sukeroku skips out on practices, dresses slovenly, and performs “advanced” pieces against his superiors’ wishes and then fights them about it.

Interestingly, Kikuhiko doesn’t seem personally all that invested in professionalism in and of itself–he nags Sukeroku to behave and dress appropriately, but he does so because he doesn’t want to cover for him or get lectured (and, I suspect, to protect Sukeroku from the damage that could come from earning the masters’ ire), not because he thinks it’s the “right” thing to do. It’s not so much that he believes in tradition and hierarchical structure (he’s cheerfully on-board with Sukeroku’s insubordinate two-man futatsume show now that he’s confident in his own abilities), but Kikuhiko understands that appearance and deference are themselves performances, a way to present oneself so others will see you as dependable or worthy of respect. 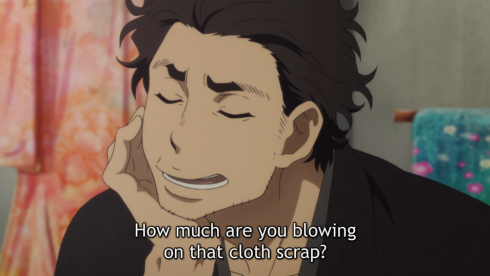 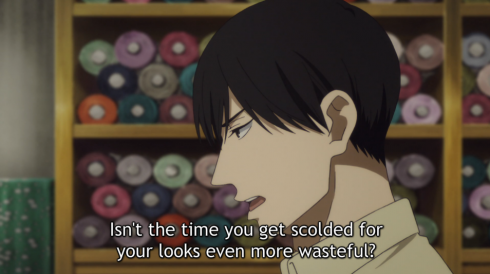 The differences between these two come from base personality, I’m sure, but also upbringing: Sukeroku came into his own as a rakugo-ka much faster than Kikuhiko, granting him a level of immunity due to his popularity, while Kikuhiko needed to be well-regarded by the masters so he’d be allowed to stay despite his middling skills. I also think it has a lot to do with that central motivation of theirs: Sukeroku doesn’t care about anything but the audience’s reaction because he’s doing rakugo “for the people,” but Kikuhiko is doing rakugo for himself, for that “place to belong,” and that means finding a family backstage as much as it does finding a voice on it.

This begins to come to fruition in ways Kikuhiko himself may not have expected because, thanks to all that etiquette, Kikuhiko now arguably has a leg up on Sukeroku when it comes to getting work because he’s both talented and they can trust him not to flake out, perform an unexpected piece (and mess up the schedule in the process), or argue with his superiors. It may also be one reason why his master ultimately decided to take him along on the “family tour” instead of Sukeroku. Talent can only get you so far, and Sukeroku may learn that the hard way now that Kikuhiko won’t be around to shield him from the more practical aspects of his career. 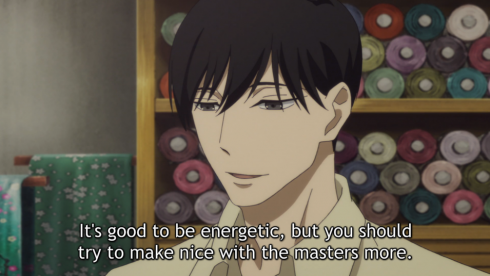 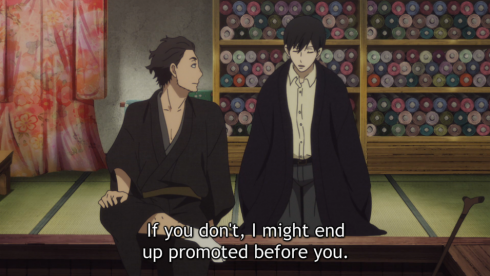 While the thread of “performance” affects Kikuhiko’s professional life, that second thread, “distance,” characterizes his personal one. His relationship with Sukeroku is shifting to one of equals on-stage, but their off-stage relationship remains as constant, close, combative, and impossible-to-define with traditional labels as ever (I’m suddenly reminded of 30 Rock‘s Liz and Jack referring to the other as their “work-husband/uncle” and “coworker/little brother,” respectively).

Kikuhiko still complains even as he protects and nurtures Sukeroku, and Sukeroku still exudes confidence despite relying on Kikuhiko for pretty much all his day-to-day needs (it’s telling that his first reaction to Kikuhiko leaving on a trip isn’t “congratulations” or even “I’m jealous” but “I don’t have any money”). In most of their scenes they’re shown either facing each other or facing the same direction, and the camera loves to show them up-close in the same frame, or have one grab the other and drag them into the frame with them. 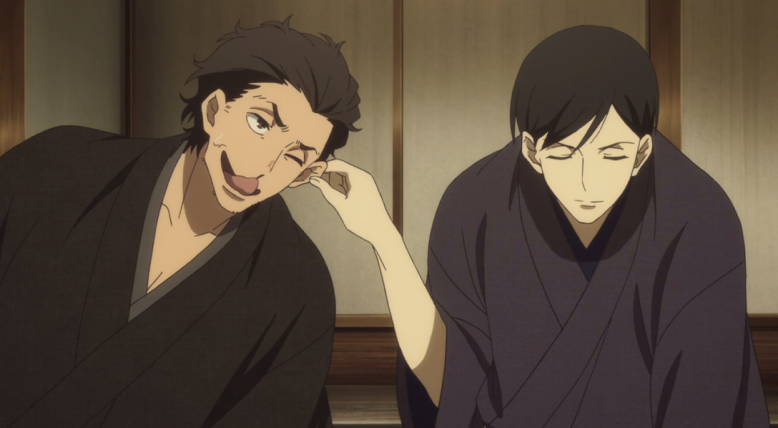 Behold, an entire relationship summarized in a single screenshot.

Meanwhile, the distance between Kikuhiko and Miyokichi grows rapidly this week, to the point where he’s all but cut ties with her by the end. Their relationship has never been characterized by intensity or passion (in fact there’s a growing possibility that Kikuhiko may be totally uninterested in physical relationships), but there was an emotional bond forming between them: Kikuhiko leaned on her (sometimes literally) for support when he was struggling with his rakugo, and she provided him with encouragement and practical aid.

Look no further than SGRS‘s favorite visual cues, hands and feet, to see them clasped together or pointed towards each other in past weeks. Now, though, Kikuhiko is always facing away from her or even physically pushing her away, they’re rarely shown in the same frame, and when they are it’s almost always from a distance. Miyokichi herself is painfully aware that Kikuhiko has lost interest in their relationship, but with both Yakumo’s narrative voice and Kikuhiko’s internal one are absent from the story this week (fitting for an episode about distance), it’s difficult for us at home to pin down exactly why. 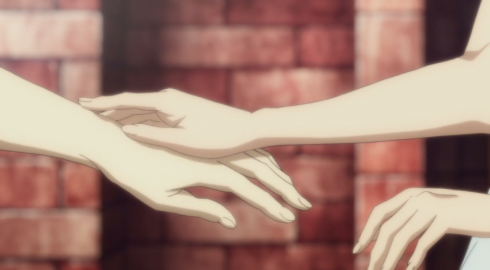 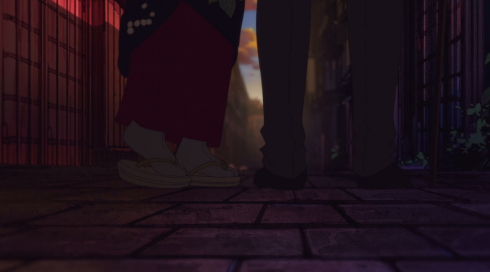 The simple answer is, of course, that he’s just not that into her. Miyokichi’s forwardness often made Kikuhiko uncomfortable, he frequently scolded her for “not understanding” his professional struggles but still talking as if she did, and she was admittedly jealous of his devotion to both Sukeroku and rakugo, so it’s not as if they didn’t have their share of discord already. Then there’s the subtextual answer, which is that Kikuhiko is in love with Sukeroku and doesn’t have room for anyone else in his life (or heck, given the soft smile he wore when Miyokichi and Sukeroku were bickering, maybe he sees the two of them as a better match).

And the knotty, somewhat cynical answer is that, intentionally or no, Kikuhiko was using Miyokichi as an emotional crutch, and now that he’s found his confidence, his master’s respect, and that “place to belong,” he no longer needs her or the geisha past she represents. There’s a question of selfishness that runs through this episode–Sukeroku “running away” so that Kikuhiko has to clean up his mess; Kikuhiko saying Sukeroku should dress better so he doesn’t get yelled at; Miyokichi wanting Kikuhiko to make shin’uchi so she can see him more often–and I think we see that here, too. Who’s using whom? Is anyone? And where does the line between “the natural give-and-take of a close relationship” and “being taken advantage of” fall, exactly? 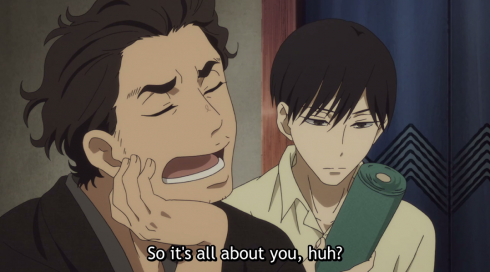 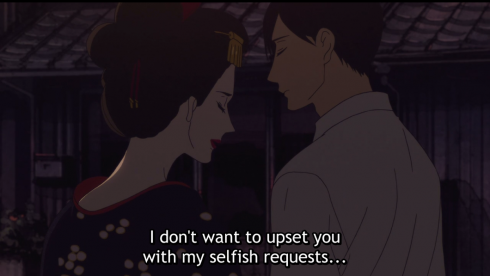 Based on Kikuhiko’s previous interactions with both her and Sukeroku and the distance that begins to grow after his first successful performance, I suspect it’s a complicated mix of all three, because our characters are very human and humans are very complicated. However you choose to read it, it suggests that a final, official break between these two isn’t far away–and that Sukeroku may have a chance to voice his own (poorly concealed) interest in her before long. For now, though, Kikuhiko gets to hit the road with his one true love: rakugo. May they have a lovely trip together.