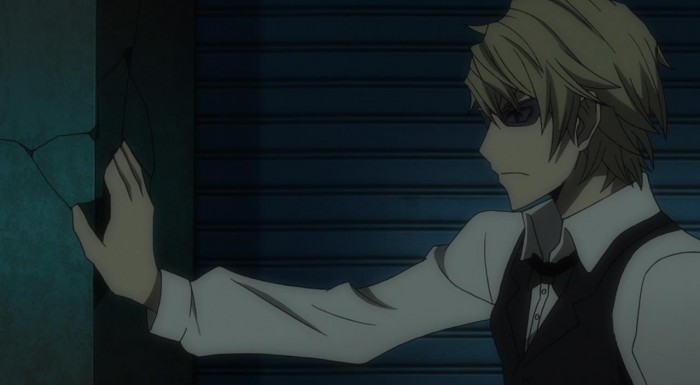 Its with one of its strongest episodes, that Durarara!!x2 slowly begins to reveal the truth behind itself. The series has been a strange sequel since the outset, but now things are finally starting to make sense. Durarara!!x2 was a sequel that came out of nowhere, years after everyone had all but given up hope, and then when it did arrive, it felt oddly empty and lacking the magic and finesse that made the original series so popular. Now, as we head into the end game, the big question of why Durarara!!x2 just doesn’t deliver, is starting to get some answers. 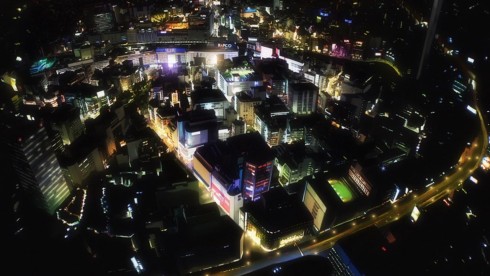 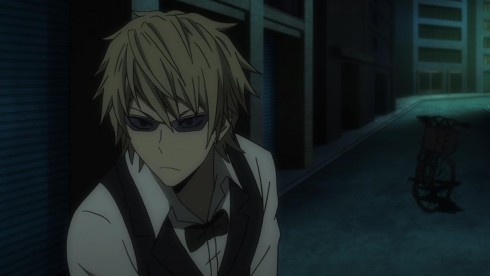 It really does take a solid episode to put things really into context. Like all of the strongest episodes to come out of this second series, Durarara!!x2’s 31st episode benefited from a singular focus on one particular event, and one character in particular on top of that. This was Heiwajima Shizou’s episode, his time to shine, after being pretty much relegated to a side character for most of this second series. Shizou’s been horribly underutilized, especially because both he and Izaya were one of the major draws of the franchise, right alongside characters like Celty, Shinra and the three highschool kids Kida, Mikado and Anri.

Since that first series, we’ve had all the other characters either get a renewed sense of focus, or had entirely new characters take the spotlight, to mixed results. But there’s just something inherently powerful about a character like Shizou, and how he just brings out the most interesting aspects of the entire show to the forefront. 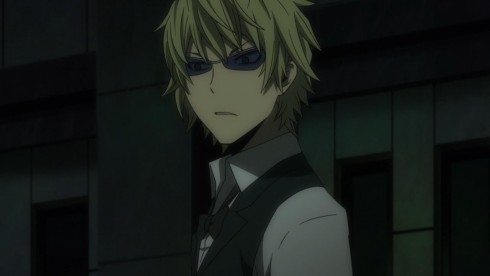 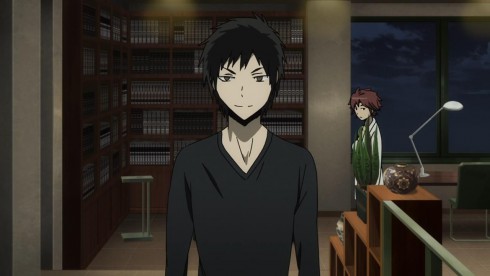 Shizou is the yin to Izaya’s yang. He’s not exactly an altogether comprehensible person, and not normal by any stretch of the imagination, but like Izaya, he’s got a code and a mantra that he lives by, everything else be damned. In Shizou’s case, he’s just fiercely loyal to those people that he knows and is friends with. It doesn’t matter if those people have tried to kill him in the past or not, if he’s taken a liking to them or gotten to know them, then Shizou’s prepared to give his life for them.

Case in point, Varona and her whole confrontation with Shizou. That stuff was awesome, and understandably so, if only because the whole Varona/Shizou angle has been one of Durarara!!x2’s few highlights and achievements. Varona has always needed someone monstrous like Shizou, someone who she can’t quite comprehend or break, and someone who is generally a nice guy. 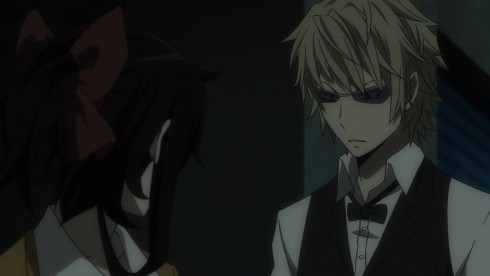 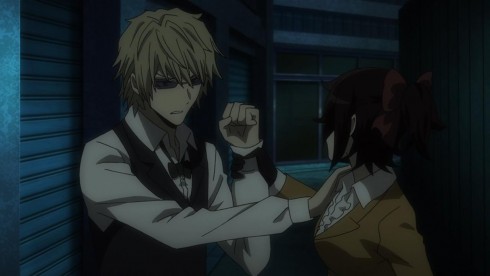 Because beyond all the brute force and anger problems, Shizou is a nice guy. Izaya is inherently a devious evil guy who’s in it all for his own amusement, but Shizou is all about doing what he believes is right, and doing right by those that mean something to him. Its why him forgiving Varona, and leading her out of the darkness is such a great moment.

The whole Varona coming “home” moment, her redemption and confession to Shizou has been a long time coming, and its been skilfully built up in the series without ever overstaying its welcome. If only the rest of the story knew of such restraint. Its characters like Shizou and Varona, that can exist in a storyline about a magical sword weilding office lady capturing a dullahan for profit, and just steal the show. 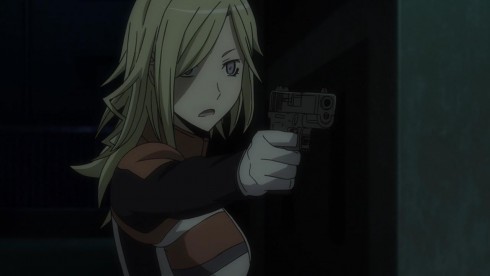 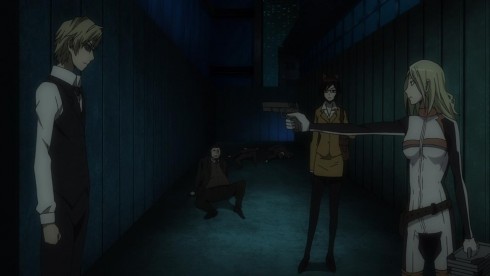 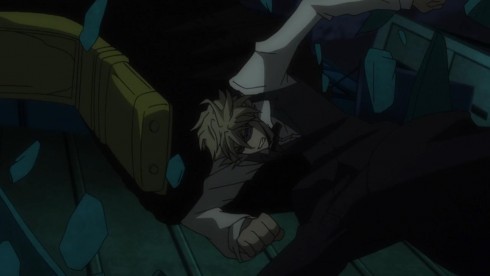 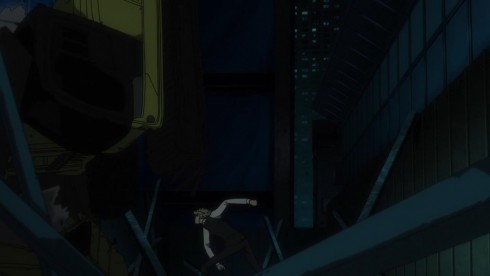 And in case anyone was ever wondering just how indestructible Shizou is, well… neither some steel gerders nor a friggin crane dropping square on his head, can even remotely put a dent in him. I can’t say I disagree with Izaya’s assessment of Shizou not being a human, by physical standards at least. From a morals and goodwill stand point though, I’d say Shizou is more human than Izaya himself (not that I expect Izaya to be considering himself a human).

Now I did mention that Shizou and Varona kinda stole the show, but what of Celty and Kujiragi and that whole mess? Well, in classic Durarara!!x2 fashion, that particular plot line all but fizzles out. After some talk and words with Shizou, Kujiragi pretty much “steps aside” to fight another day, and the whole issue with Celty and Saika is left pretty much on a back burner. 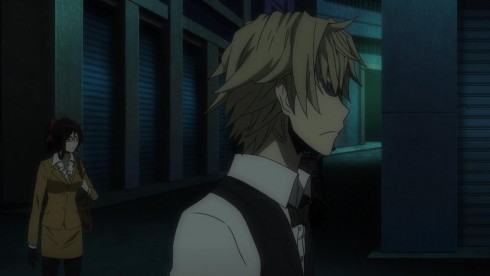 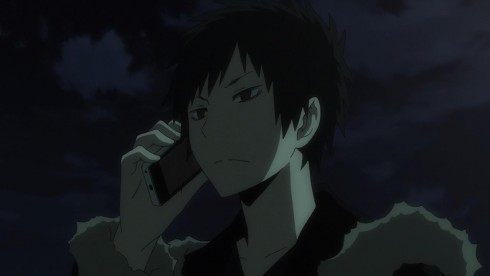 Even Shizou himself kind of decides to forget about Celty for a second, and instead decides to lay waste to Izaya instead. With Shizou, that’s about right in terms of who he is, and I’m sure in his mind, the danger to Celty’s all but gone, but there’s something very inherently throwaway about this whole idea.

Why bring the Celty head plot line up at all, if its just going to be quietly scurried off to the side, and then probably ignored until later. It just feels like a waste, and it harkens back to the central problem of the series, franchise and its writer Ryohgo Narita. Narita-sensei is a very talented writer, and I’d say he’s exceedingly great at crafting intriguing, weird and endearing characters. 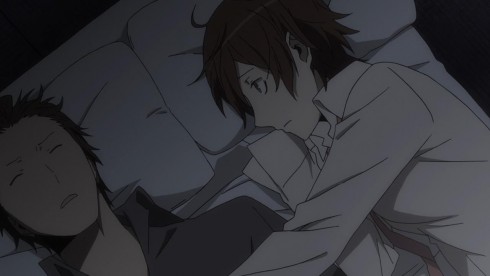 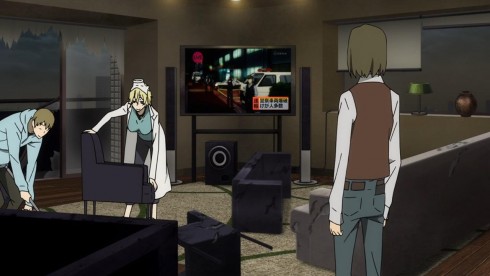 THAT, is Narita and Durararara!!x2’s bread and butter, interesting characters that inhabit and all coexist in this bizzare version of Ikebukuro, Tokyo. The problem is, there’s just too many cool characters. Yeah, you’d think you can never have too much of a good thing, but in this case, I’d say an excess of anything can lead to disaster.

In Durarara!!x2’s case, it has all these cool and interesting characters, but it doesn’t have a character arc for them to go through, anything meaningful for them to experience, or really anything cool for them to do. The big thing that made the original Durarara!! such a success, I think, is that it was all about introducing us to all these cool and interesting characters that exist in Durarara!!’s version of Ikebukuro. The introduction for each new character happened amidst an isolated storyline, one that would have the other characters either tangentially related, or just have a few of them cameo in what was essentially one character’s story. 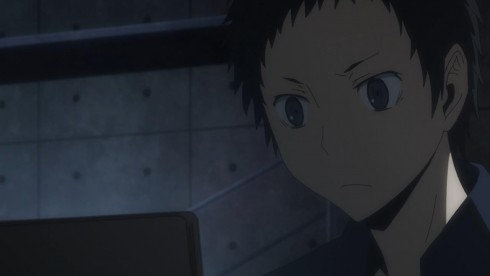 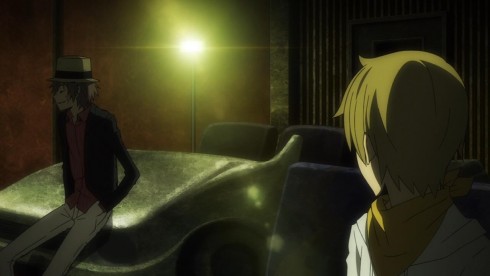 That formula really worked great, and it works great still, but the problem is Narita-sensei and Durarara!!x2’s obsession with having as many characters as possible exist, and somehow affect this giant, overarching event. Managing that many characters, giving them their due AND keeping the story rolling is a near impossible task. And that’s really what Durarara!!x2 is, its that result of all that weight of ambition just crushing everything.

By itself, the idea of Celty’s storyline is interesting, her whole situation of her head and what it means for her and Shinra is a strong idea, as is Kujiragi’s little tussle with them. Shizou and Izaya’s little battle is interesting too, so is Shizou and Varona, and then of course, there’s still Mikado and the Dollars. 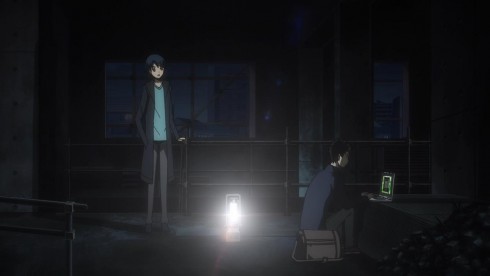 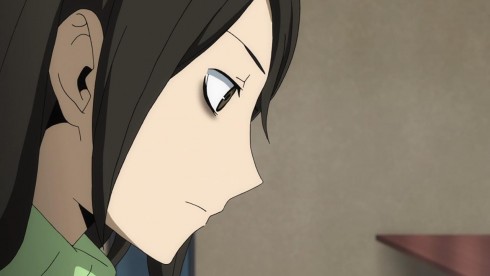 But the fact that all these stories intertwine so deeply, and get in each other’s way, while basically keeping all the characters basically the same, is hurting everything. You can’t have characters that don’t die, change, or develop, and you can’t have so many of them acting inside a giant story line like this.

So we know why Durarara!!x2 doesn’t work, at least for me, its too big, too grand, for its own good. So where does that leave us for the last few episodes? 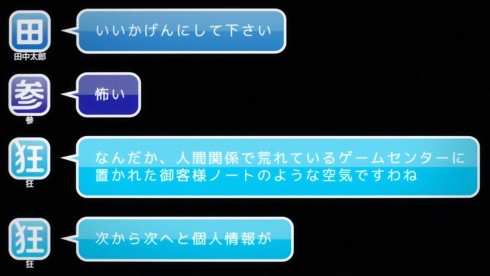 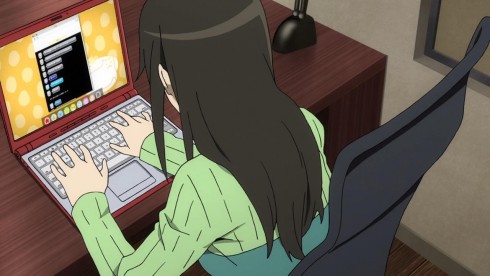 Well it seems like Shizou and Izaya are going to have their last confrontation. It seems like Cetly and Shinra’s story line is about ready to resolve, and it seems like Mikado and his friends are coming to a resolution too. I mean, even the whole Namie breakout in the Dollars chatroom, doesn’t feel ominous at all, it just feels like something that’s pushing Mikado to stop being a prat and do the right thing again. Even the whole moment of everyone realizing who everyone is in the chatroom, just feels glossed over and kind of like a letdown.

These should all be monumental moments, ones that I should be excited for. I’m not all that interested though, if only because I’m all but convinced that whatever happens, its not going to actually change anything. Izaya will still end up running around in some corner, Shizou will still be around with Varona and co, and Mikado, Anri and Kida will end up making up as well. That’s what it feels like, and that also sounds like a really “bleh” end to everything. 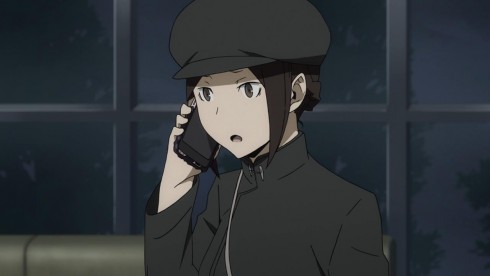 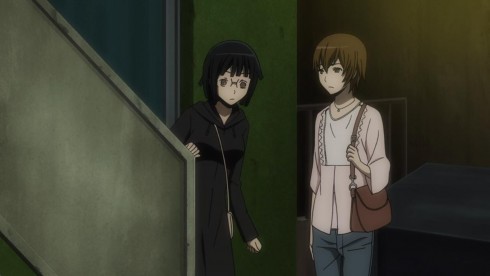 If Durarara!!x2 manages to even turn ONE of these storylines into something unexpected, then I think I’ll get some measure of joy and excitement from these last few episodes. But I do believe that at this point, Durarara!!x2 is just what it is, a disappointment. Bad plotline, bad adaption? I’m not sure, but there’s just too many things that just feel… empty.

Its strange to be so negative in an episode that I actually enjoyed quite a bit. The Shizou parts were definitely great, but they felt like more of an anomaly than an actual event or moment that the series had been building up to. I wonder how many of these crutches Durarara!!x2 has left, and whether it can just limp its way to the finish line. 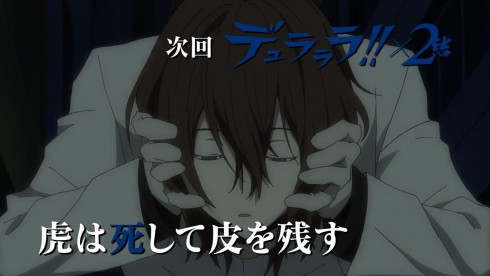 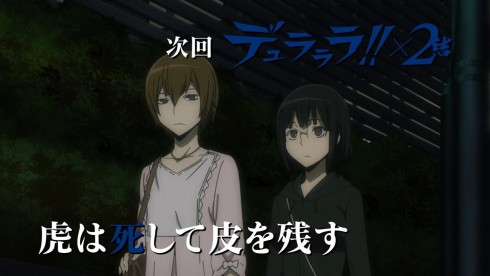