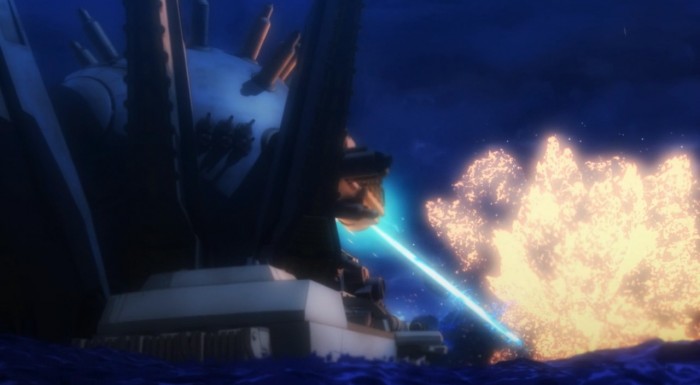 Well this turned out better than I had expected. Considering the bleakness of the situation and some of the events in the episode itself. I will give the show some credit. It had me concerned about what was going on. When the Indigo Plasma unleashed hell on the mine, I was wondering if the civilians really did die. The show played it so seriously, with Qwenthur looking devastated. Since they were unnamed civilians I wasn’t sure if they were going to survive or not. It is nice when a show can play with your expectations a little and make you think the worst has happened, even if that isn’t the case. Maybe rationally you could expect the show not to allow mass murder on screen, but they have shown civilian deaths in the past so it seemed possible. Just the utter brutality of that attack on the mines, showing how terrible things can be if people are directly in the firing line of an Object.

Just some nice drama in that scene before the mood was lifted. A somber song, Qwenthur realizing the truth about Nutley, and just being reminded of the utter cruelness of war. That even his ‘allies’ can be utterly evil. 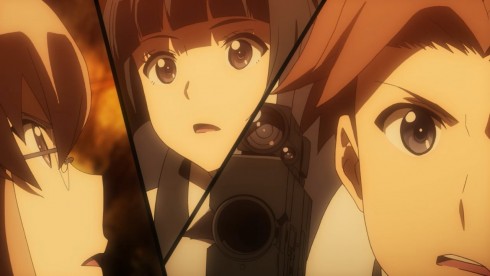 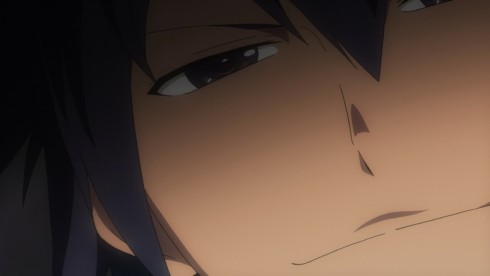 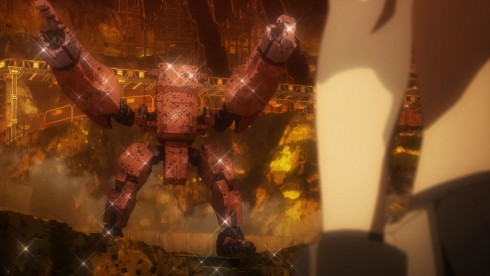 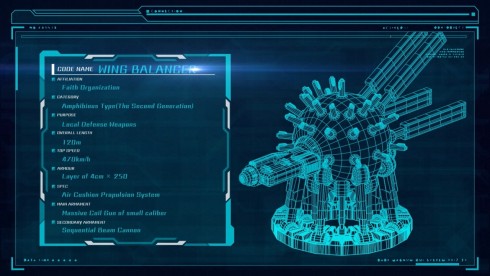 Once again Qwenthur has to think fast on his feet and come up with some strategies for victory. Having to deal with both the powered suit and the Wing Balancer. I will give him credit for the creative method of taking down Nutley. Killing someone with a diamond barrage is pretty cool. A spectacular way to die. Just blasted with a kind of shrapnel shower. Of course his plans weren’t perfect the whole way. His first attempt against Nutley was an utter failure, the hand axe not having enough firepower in that amount to punch through that armor. And he was saved to begin with by that civilian who threw herself into danger to hit a weak point in the powered suit. Sure he prevented her from being shot earlier, but there wasn’t any reason for her to come back and risk her life outside of just being a pretty darn good person.

Though you could say that was the key for everyone surviving. Frolaytia reached out to civilians from the enemy in order to save their lives. Both the anti-war people and Frolaytia’s side reached out and trusted each other enough. That trust allowed a massacre to be avoided. It’s a feel good story. Two sides putting aside their distrust and finding a way to the best possible solution considering the situation. Pretty darn convenient that there was all those subs still there, but sometimes for the best case scenario you do need a little bit of luck.

Now it’s not all a feel good story. We still lost 3 characters in the start of this arc. They might not have been civilians, but I’m kind of surprised to see Havian and Qwenthur able to shake off those deaths so quickly. 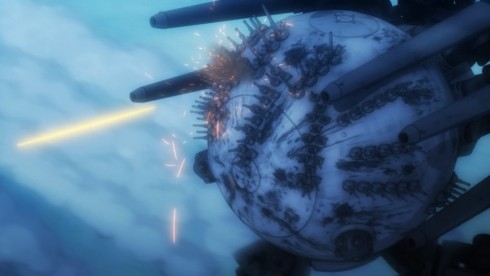 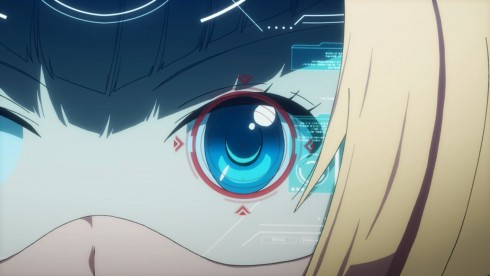 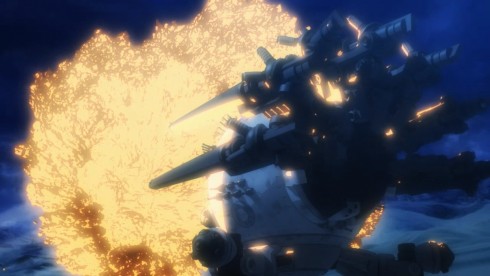 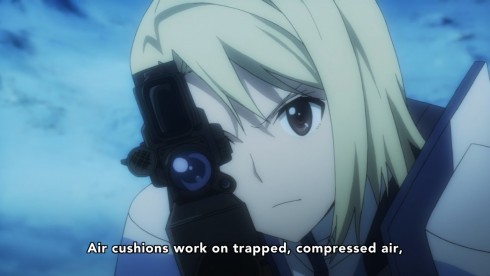 I enjoyed the showdown between the Baby Magnum and Wing Balancer. It was a tough showdown for Milinda with the enemy able to launch itself around like that. Having that vertical direction made it a lot harder to easily land her shots. Some close calls as well. Havia deserves as much credit as Qwenthur for the end result since he did continue the mission and get the Wing Balancer’s targeting thrown off. Also some luck that Qwenthur kept the weapon with the IR jammer. But to be fair if it didn’t have an IR Jammer it might have had communications which also would have been handy. Qwenthur just finds a way to win with whatever he has at his disposal. Sure it was convenient that he had the tool to mess up the Wing Balancer’s landing ability, but sometimes the plot does have to give the main cast a break or they won’t have any hope of survival.

In the end though this will be counted more as another notch on Milinda’s belt for Object takedowns. Qwenthur did help disable it, but in the end she did get the finishing blow. She was also the one who made the note about where their focus needed to be in terms of attacking. I wouldn’t say she had the best focus overall since she was quick to get angry at Qwenthur even mentioning the Rush Object which had previously been piloted by Miss “Ohohoho.” 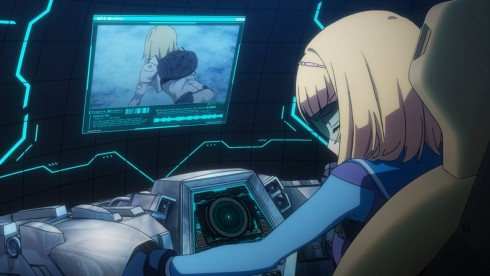 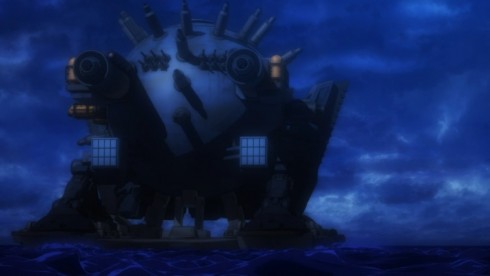 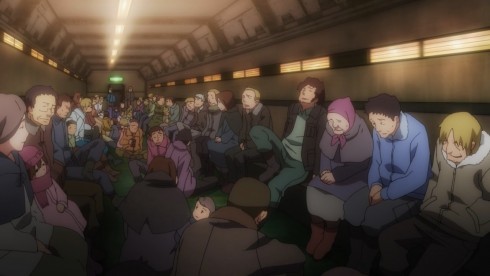 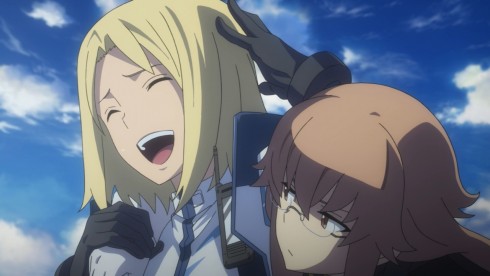 What is a bit surprising for me is that there was never any interaction between Qwenthur and his likely childhood “friend”. I expected something to go on there, but in the end she never actually met Qwenthur during her trip to the base. Also I have to say Qwenthur sure gets away with a lot of things that could be called sexual harassment. The guy is caught trying to steal diamonds and gets away from being punished for it…basically by being a big pervert.

Overall I liked this episode. Maybe some things threw me off a little. Such as Charlotte being conveniently wounded and turned into a literal damsel in distress. But to be fair the show has Qwenthur and Havia get beaten up a lot so it’s not like the show only makes women into vulnerable people. I did like the diamond shrapnel attack from Qwenthur and the reveal that Nutley was a spy from their side. True enough that even a Civil War really doesn’t mean that much to Qwenthur and Havia. Just means another battlefield and likely another Object that they need to take down.