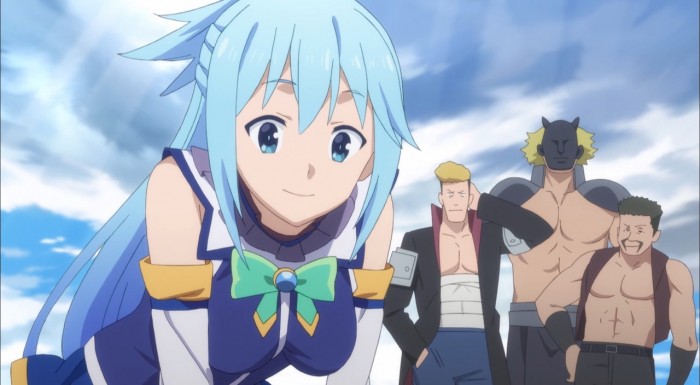 The perfect state of balance. Things both go great for Kazuma and terrible at the same time. All the success they had in this episode and yet they are basically right back into debt again. And it really is their fault in both respects. The show did a nice job hinting at the whole damages part of quests and it came to life in this one. They basically created this quest and forced the fight. In the end they did manage to win and did a great job of it…but they also caused some serious flood damage. I just love how everything in this show balances itself out nicely. You have the awesome moment of victory which makes you smile and then the end result that makes you laugh out loud. Konosuba just never fails to entertain and it got the job done again this week.

Really it is the party’s fault in the end. They wouldn’t have needed to do such a crazy water based strategy if Kazuma hadn’t stolen and sold Mitsurugi’s sword last week. They could have worked together for a much safer strategy and let him just wipe out the Dullahan with Gram. But he couldn’t help himself in going as far as he did and thus they had to try something else to win the day. It’s kind of amazing how the strengths of these characters allow them to overcome desperate situations that their weaknesses either create or contribute to. Every one of them has a role to play in this. Well maybe not Darkness. She did creep out the Dullahan, but she was still fighting well to defend everyone. Her masochism isn’t the only reason she wants to take those hits, but there is a strong sense of responsibility and a desire to protect. 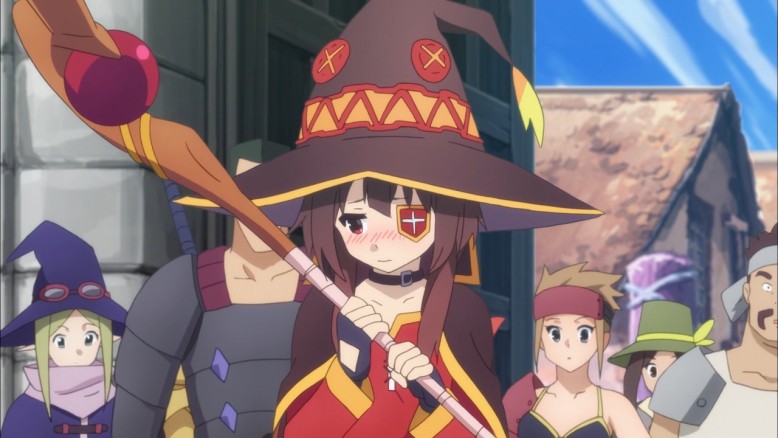 Megumin….I really thought she had grown a bit after the last incident. But…like an addict she just can’t help herself. After weeks/months of blasting away at that castle she’s just addicted to it. She can’t be satisfied by just causing an explosion in an empty field. It has to be hitting something with some solidity to it XD. Really she just couldn’t give it up and despite what happened, decided to keep on shelling the Dullahan’s castle. Although I suppose you can say that they did gain a lot from this. At least the experience and points they probably accumulated will be pretty key. Still, I can’t help but sigh at Megumin’s foolishness. Not so much Aqua for going along with her, at this point you just expect her to make bad decisions XD.

At least it was a pretty solid team effort for this victory. Megumin did wipe out the entirety of the Dullahan’s undead forces and probably dealt some serious damage to the Dullahan as well. Though it says something about that guy’s durability that he could tank an explosion spell and keep on fighting. A kind of scary threat for the future. They only get one explosion out of Megumin and have to make the most of it. 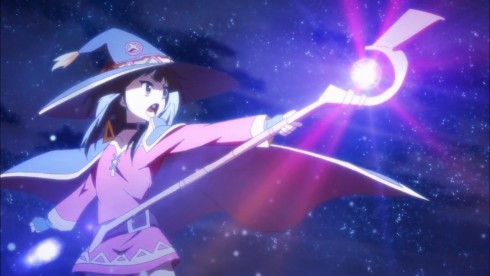 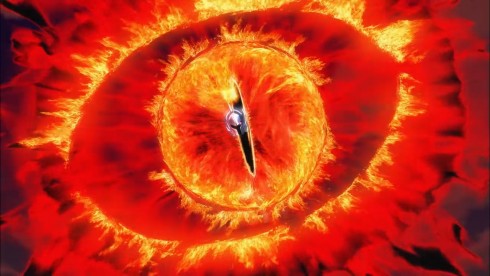 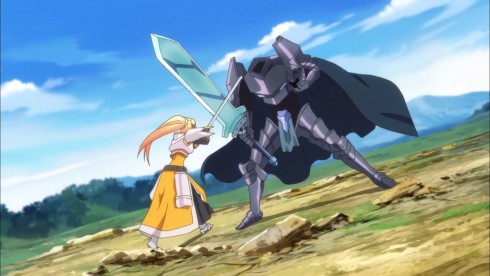 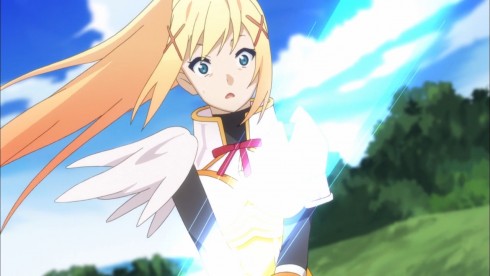 Darkness really did show her strengths in this episode though. Outright stepping in and holding off the Dullahan for a fairly long amount of time. She has no accuracy even with a non-moving target, but she can take attacks well enough. And they were facing someone who had enough honor in him that he couldn’t just bypass Darkness. He had to take her down and that wasn’t easy. Darkness was legitimately frustrated and upset about other adventurers being ‘killed’ by this guy. And despite his status, she was actually able to match up to him in pure strength for a fair amount of time.

On the other hand she also had her perversions going at the max this time around. She couldn’t go long before imagining he was going to do something perverted to her or even responding to Kazuma calling her a hardcore pervert. She just really had a heck of a time there. But in the end Darkness is still a really good person at heart. Thinking some of the adventurers had died and taking a moment to mourn them. And she was the one who stopped the Dullahan from fleeing from Aqua’s water attack.

Also on the Dullahan himself…kind of amazing to see that he wields the eye of Sauron as a weapon! That had to be what everyone else was thinking when he attacked. 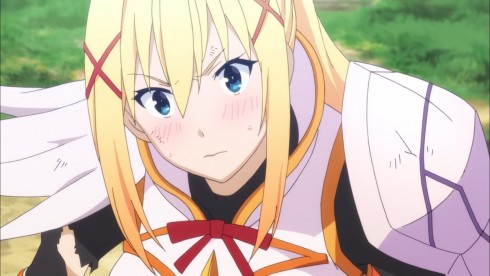 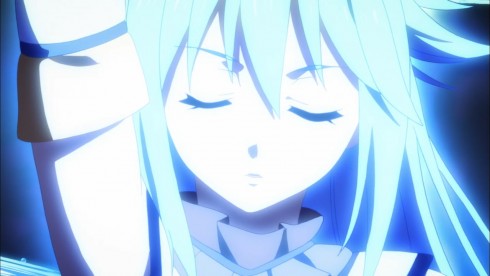 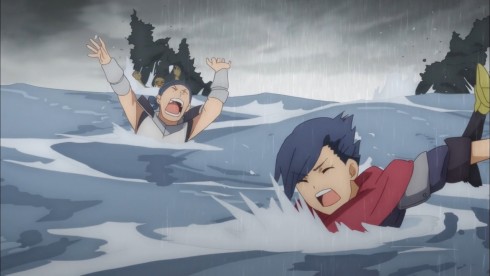 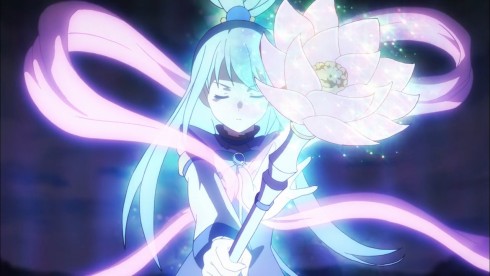 And of course Aqua…well she was both the all-star and the greatest screw up of the episode XD. It was thanks to her that they won. Her purification spells were hitting hard and her water spell did a heavy dose of damage. Really she is the one who did the most to actually hurt this guy. It’s just that she can be a bit stupid. During the middle portion of the fight she was probably taking a break after being chased by the undead horde. It really is the most frustrating when Aqua asks “are you an idiot” though XD. In the end it was more Kazuma’s fault that the damage was so extreme. If he just told her to use a moderate amount of water they would have still won. But she got taunted and called a useless goddess so many times that she as much wanted to prove Kazuma wrong as she wanted to win this fight.

And holy crap was that a spell. The Dullahan picked a bad fight against someone like Aqua. She may be a fool, but she’s a fool of a water goddess. She can bring it when needed. Heck she even managed to revive the guys who actually were killed earlier. Her skills are pretty darn high. It’s just that…well she also goes too far. Her spell did save the day, but it also did some serious property damage. 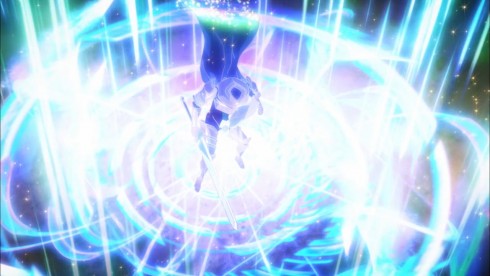 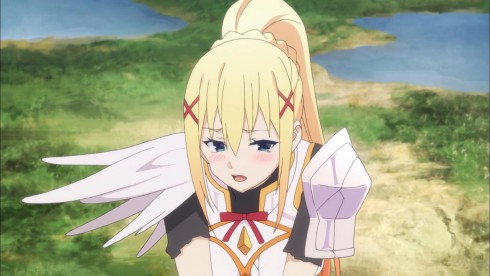 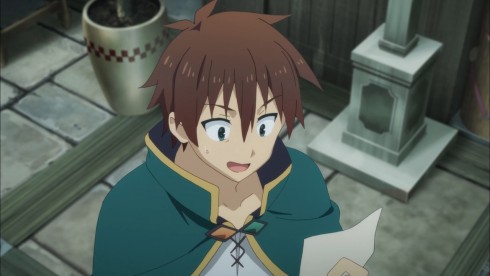 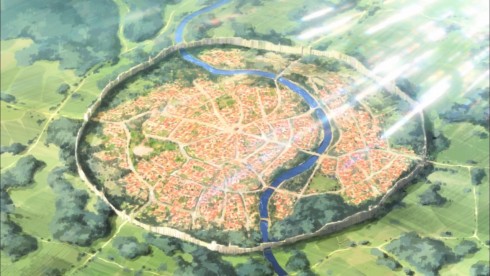 Kazuma of course was critical throughout the episode. He directed a lot of attacks and even had a good water+freeze strategy. It just shows though that he has limits. His steal won’t work against everyone, especially high level enemies. At least if you don’t weaken them first. And he can be a real fool when it comes to handling Aqua. Praising her every now and then might be a good idea and prevent her from going too far to try and spite him. Not surprised he tried to just use the money to run away from any more fighting. It’s just some scary and dangerous stuff. Luckily for us his errors cost them so much money that they have to keep fighting just to keep above the debt.

Another really good and hilarious episode for Konosuba. This show delivers both some great comedy and some nice little character moments. Obviously the animation isn’t so great that it will win awards for the action, but even there it did ok work. I can’t wait to see what kind of crazy adventure our party gets into next. As Kazuma’s only hope to escape this madness is to defeat the big bad and use the free wish from the gods to get a comfortable and quiet life.