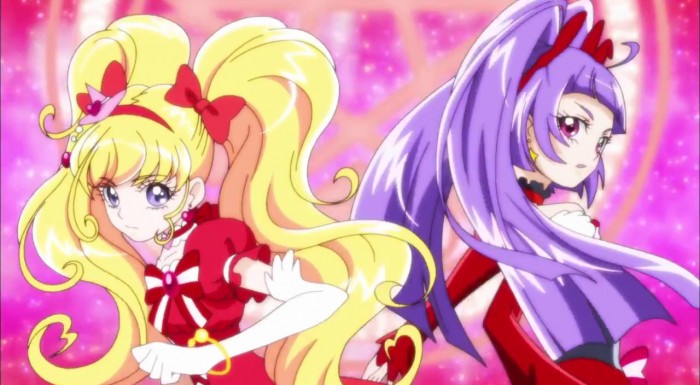 In the overall summation of anime genres there are a few easily identifiable ones that are “decidedly Japanese” – two examples come to mind immediately, that of “Mecha” (perhaps most famously characterized by the Gundam series) and that of the “Mahou Shoujo”, or “Magical Girl”. The wikipedia page dedicated to “magical girl” describes it as “…a subgenre of Japanese fantasy anime and manga which feature girls who use magic.” There are a wide variety of variations on the genre, but some of the most famous include the franchises Sailor Moon, Cardcaptor Sakura, Mahou Shoujo Lyrical Nanoha, more recently Puelli Magi Madoka and finally the Pretty Cure (or PreCure for short) series, who have a younger audience generally in mind much of the time.

The wikipedia page for the Pretty Cure franchise gives a good general summary about the setting of the series as well: “Each of the series focuses on a group of girls, most commonly Japanese schoolgirls in their second year of middle school, who are granted special items that allow them to transform into legendary warriors known as the Pretty Cure (or PreCure). With the assistance of creatures known as fairies, the Pretty Cure use their magical powers and enhanced strength to fight against evil forces and organizations who create monsters to bring misery to the Earth and further their plans. As these series progress and stronger enemies appear, the Cures gain new magical items, new abilities, and sometimes new allies to help them in their fight against evil.” 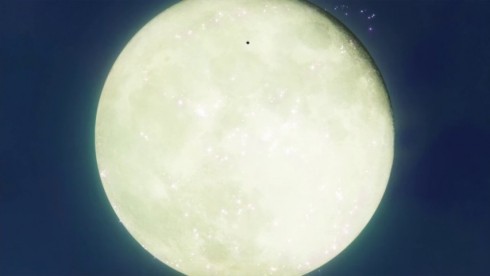 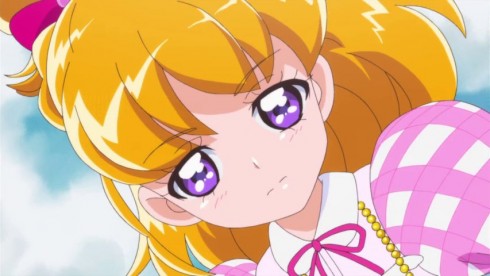 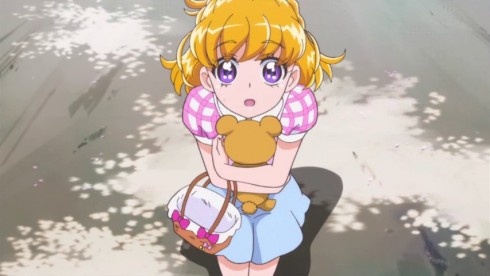 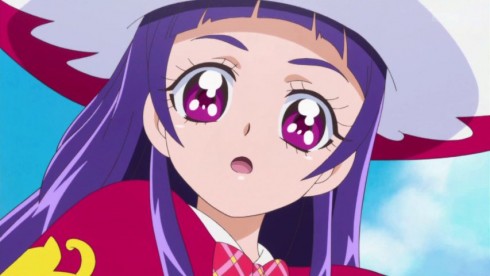 There have been twelve PreCure series before the one that began most recently that goes by the name of “Mahou tsukai PreCure”, and if you take into consideration that each series has nearly 48 episodes on average, a season of PreCure usually lasts a year airing on television. Generally each season also has a movie released in the theatres dedicated to the series airing at the time, and sometimes there are huge crossover movies called “PreCure All-stars” as well. There have also been musicals (!) and many video game adaptations as well. The PreCure series has become a sort of “cash cow” for its studio Toei, and interestingly is one of the main priorities in terms of funding and quality of animation, etc. of said studio year in and year out. Nevertheless, the PreCure franchise is sizeable, quite sizeable, and there is a lot to get immersed in! ^^

Before going on I feel I should mention a warning sign. If you feel this is a “small” or little known area of anime and manga think again – piles and piles of series released in this genre have come out for several decades now, stretching back all the way into the 60’s (!); there are literally nearly 200 series in anime alone dedicated to the theme (manga series are legion). It was about 10-15 years ago that Japan began marketing the mahou shoujo genre to male audiences (with success), and as a result the worst aspects of the “otaku” image often portray an interest in the mahou shoujo genre that very quickly moves over into the realm of the distasteful. There are a sizeable number of series in anime or manga that are relatively “serious” or free of “pandering” and trying to sell a series by emphasizing sexualization (particularly of young girls), and wandering further afield this manifests itself very easily (and swiftly, I have been told) in the fringe elements of pornography. Because of this the mahou shoujo genre very quickly gets dismissed and viewers of it are quick to be “labelled”, which is a pity. 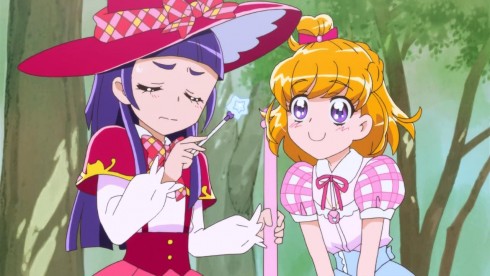 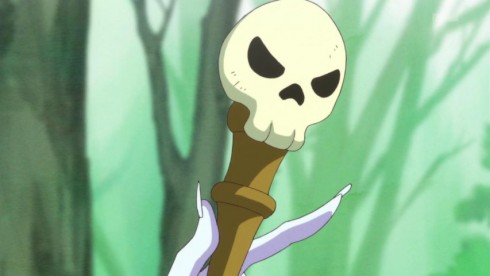 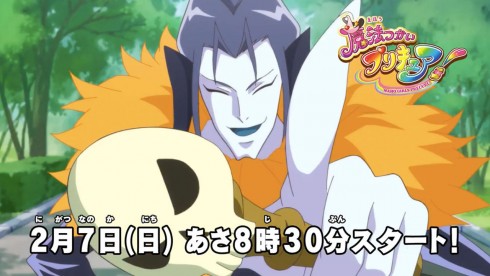 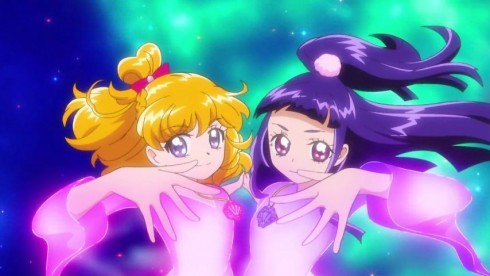 Moving on, then, the Mahou tsukai PreCure series is their 13th in the franchise. The two main characters introduced at the beginning of the series are named Mirai and Riko. Mirai is a thirteen year-old middle school student who is a lovely and energetic girl who is interested in many things, especially magicians and witches. Though she has no friends, she usually goes out with her stuffed bear Mofurun (given to her by her grandmother) to different places until she meets Riko. After she and Riko became Pretty Cures, she begins attending magic school. Her family runs an accessories and jewelry shop. Riko is a mysterious thirteen year-old girl hailing from the Magical World and attends a magic school. Though she is good at studying and often believes her calculations to be correct, she is not that good at casting magic on her own. After her home country began to be targeted by an evil band of “Dark Magicians”, she decided to search for the Linkle Stone Emerald, which led to her meeting up with Mirai.

A good summary of the series (including information that has not yet shown up in the anime and has undoubtedly been drawn from other Japanese sources) can be find on it’s wikipedia page: “The Magician Pretty Cures (or “Magical Pretty Cures”) are Legendary Magicians who once fought against Dark Magician, each possessing immense powerful magic and items called “Linkle Stones”. [At the beginning of the series] Mirai and Riko both inherit the powers of the legendary magicians in order to search for the Emerald Linkle Stone. Both Mirai and Riko can perform spells with their wands by chanting the phrase “Cure Up RaPaPa!”. They can transform into Pretty Cures by using the Linkle Stones with Mofurun and chanting “Miracle Magical Jeweliray”, and can use enhanced magic with the Linkle Stick [a sort of magic wand]. By using different Linkle Stones, the Cures can transform into four different styles; Diamond, Ruby, Sapphire, and Topaz, allowing them to use different kinds of magic.” 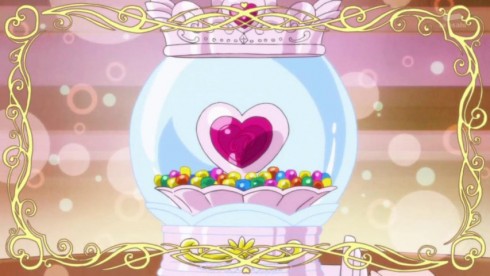 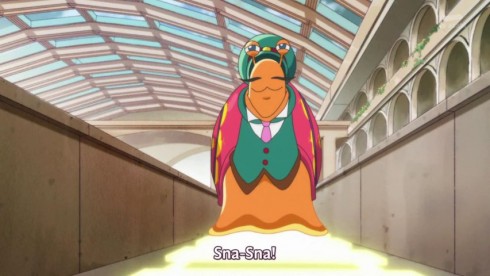 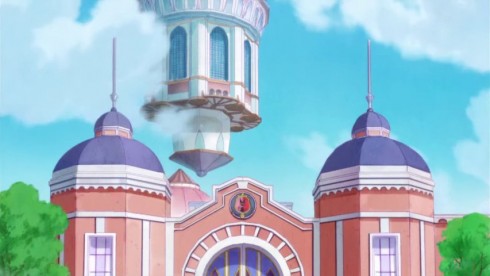 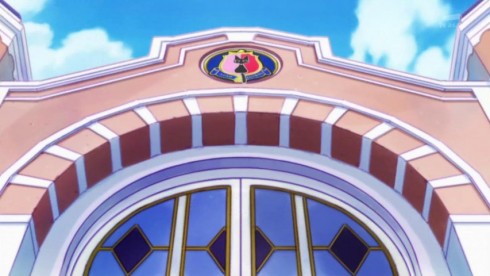 As per the common storyline of a PreCure series, not only do the young girls discover and unexpectedly transform into their PreCure forms, but they do so due to the arrival of the “bad guys” of the series. In this case the first to show up is named “Batty” (a sort of vampire looking guy with a skull-tipped walking stick and huge bat wing like ears), a member of the “Dark Magician” organization who is also searching for the Emerald Linkle Stone as well. After a brief chase and skirmish with Mirai and Rika (resulting in their suddenly changing into Cure Miracle and Cure Magical) Batty and his magical monster retreat to report the appearance of the PreCure to the Dark Magician group, while Rika brings Mirai to the Magical Kingdom’s Magical School to talk to the school’s headmaster about the unexpected transformation into the PreCure. Batty attacks at the Magical School as well, but his magical monster is defeated by the PreCure and he “strategically withdraws” (i.e. runs away).

In the second episode where the events take place primarily at the Magical School we also are given a glimpse into more members of Dark Magician. We meet the main boss of the group, whose name is Dokuroxy. She is apparently a power-hungry witch who seeks the Emerald Linkle Stone to dominate the world and might prove to be the main antagonist of the series. We also meet Yamoh – Dokuroxy’s secretary and second-in-command of the group. An eccentric short-sized man who has an appearance of an amphibian of some sort (a newt or gecko?) and wears what looks like a wizard’s outfit. It seemed like he was put “in charge” of Batty somehow (and likely of some of the other “Generals” we have not seen yet) by Dokuroxy’s order. It looks like these Generals were sent to earth to find and retrieve the Emerald Linkle Stone. 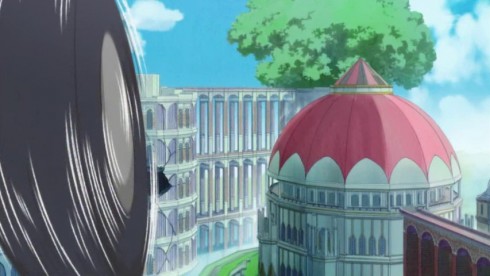 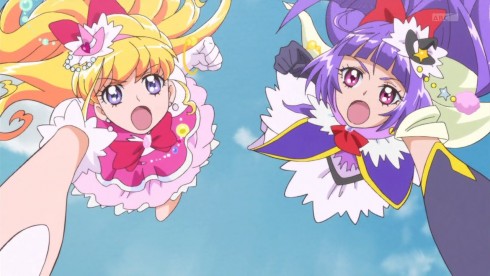 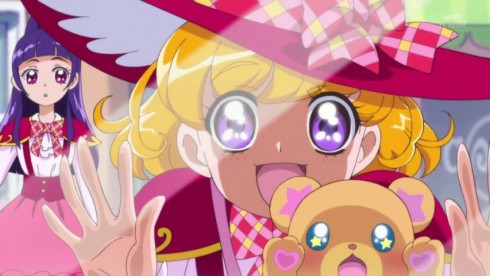 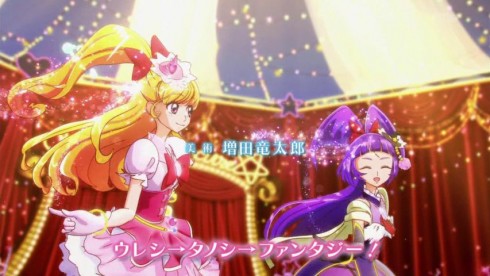 One of the big draws thus far has been the interesting similarities with earlier series that have caught my eye – one example is the organization and feel of the group Dark Magician. There is something about them that reminds me a lot of the “Dark Fall” villains from Futari wa Pretty Cure Splash Star series. Also, it appears that Mirai’s grandmother (at the minimum) might be aware of the magic world to a degree … and for all we know she may have been a PreCure for a time too (as shown in the example between Cure Flower and Cure Blossom in the Heartcatch PreCure series). It very well could be Mirai has magicians in her ancestry as well. Another big draw for me to this series was hearing that Rika (Cure Magical) was to be voiced by Yui Horie (one of my favorite VAs), and I must admit that for me the VA work of Hocchan seems a perfect fit for a PreCure series. Am so glad she agreed to the role! And the relative VA newcomer voicing Mirai (named Takahashi Rie) is also voicing another character in the KonoSuba series airing this season – that of the exploder wizard Megumin!

Both the OP and ED are pretty decent, and the CG during the ED does not break my brain either … so that is a plus in my court. I also thought the PreCure’s finishing “diamond” based move was pretty good in and of itself, but part of me feels both the transformation and finishing move sequences are unexpectedly lengthy and involve Mofurun a lot more than expected so early in the series. All in all the series is proving to remind me of an interesting mix blending the PreCure series with the famous Mahou Sensei Negima series. It is definitely striking out into an interesting territory, cleaving to the traditional PreCure standby’s that have made the PreCure series such a success for me over the years while delving into new settings and worlds.

There is no way I would be able to blog a PreCure series, but you can be certain that I will be following it. Perhaps if you are not turned off by the default targeted audience of younger age groups you might also find yourself enjoying the series and perhaps even finding yourself discovering a new franchise. ^^