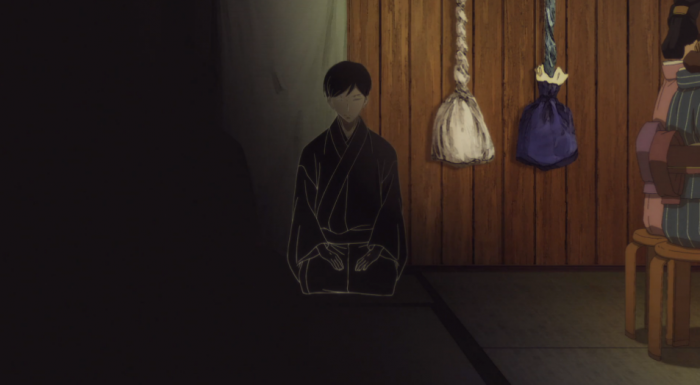 Seeing as how it’s Valentine’s Day, I thought I’d begin this post by saying something I’ve neglected to mention throughout these many words of character analysis and directorial discussion: I am completely, utterly, over-the-moon in love with Showa Genroku Rakugo Shinju. I give myself a couple of days to write these commentaries because my hot takes would just be several paragraphs of caps-lock gushing and a bunch of sparkly-eyed, flailing reaction gifs. Every week I think I’ll get used to how good this show is, and every week I am once again floored by the sheer amount of thought and artistry that goes into this production.

The cinematography is beautiful, working hand-in-hand with the narrative to ground the story in time and place, set the tone, and convey ideas. The characters display gradual growth, backsliding, uncertainty, and self-contradiction that makes them as psychologically complex as real people. The score dances joyfully between traditional Japanese music and modern-era (western) jazz, integrated into each scene so that it swells and falls with its protagonist’s emotions. The voice actors provide quiet depth off-stage and energetic or hypnotic range on it, holding their audience as captive as their characters do. It’s a masterful series thus far, and as daunting as blogging about it can be, I’m still so happy I get to do it. 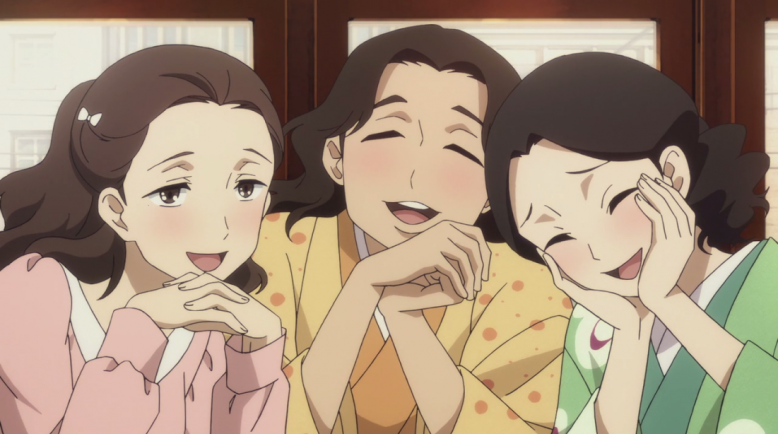 Me at the end of every episode, basically.

This week serves as a culmination of the small steps Kikuhiko has been making, as he takes what he’s learned about himself and his artistic strengths and applies it to rakugo. He is, as always, nudged along by the optimistic support of both Sukeroku and Miyokichi, who continue to understand him better than he does himself.

This only adds to the increasing bitterness he feels towards Sukeroku, who is “always ahead” of him, even when it comes to personal realizations. The cracks we began to feel in Episode 4 keep cropping up in little ways (and the preview suggests they’ll start showing themselves soon), but overall, this is another triumphant episode for Kikuhiko, characterized by serious introspection, building personal confidence, and another fantastic vocal performance from Ishida Akira. 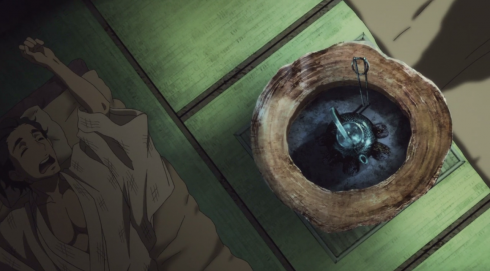 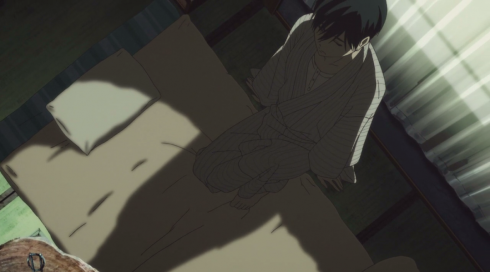 Kikuhiko and Sukeroku continue to be a study in contrasts, something the camera takes extra care to remind us this week. When one is splayed out asleep, the other is curled up awake (above). When one is standing or tense, the other is sitting or relaxed.

Even in rakugo, Sukeroku is broad motions, rapid-fire speech, and forward movement, while Kikuhiko is subtle gestures, measured pacing, and upright or even withdrawn posture. It’s no surprise that Sukeroku’s style of rakugo (the same style Kikuhiko has been unsuccessfully trying to imitate) would make Kikuhiko uncomfortable, as it doesn’t mesh at all with his personality. 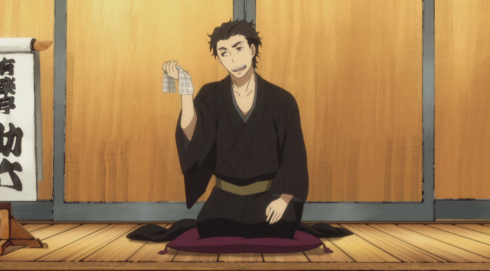 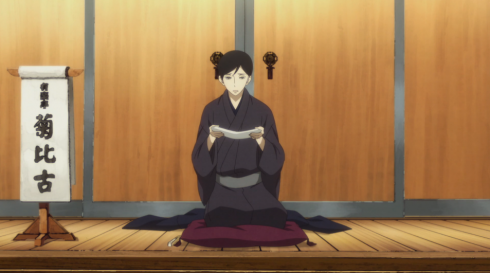 What it comes down to, Kikuhiko realizes, is that Sukeroku performs for others while Kikuhiko has always performed for himself. Isolated from the world of geisha due to his gender (and if that “if only he’d been born a woman” isn’t a perfect parallel to Konatsu’s “I wish I’d been born a man” lament in Episode 1, I don’t know what is), he fought to “make a place for himself” in the only world offered to him: That of rakugo. Except that he was snever truly comfortable because he was, like the little boy at dance school, still mimicking the actions of those around him, desperate for their approval. 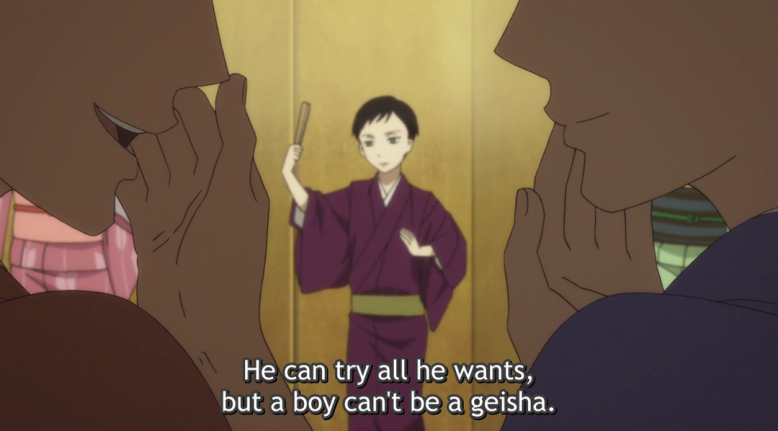 And then he becomes a geisha in his first successful rakugo performance, because suck it, gender norms.

Then last week’s play happens, and Kikuhiko is able to find a path for himself, one that plays to his own strengths by gracefully treading the line between “feminine” and “masculine” performance arts. Where Sukeroku is the storyteller, speaking directly to the audience, reaching out to them and building a fictional world around them, Kikuhiko is the actor, embodying the fictional world himself and drawing the audience into it.

There’s an aura of magic to his rakugo this week, beautifully captured by the way the scene shifts to a geisha tea house or a moonlit dock. This is the rakugo we saw him perform in the premiere, the rakugo that will one day captivate a young inmate and give him an apprentice. He’s finally found a way to engage with the audience as himself, on his own terms, and they’re loving it as much as he is. 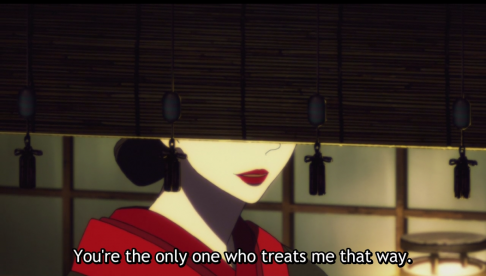 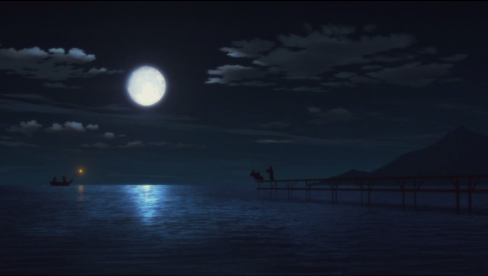 As victorious as his performance is, the piece itself is still loaded with foreboding, especially given Miyokichi’s troubled expression during the show. Suicide, it should be noted, isn’t historically as frowned-upon in Japan as it is in most western cultures; it occurs in a lot of classic tales, and while it’s usually considered tragic, there’s often an undercurrent of romance or nobility to it (e.g., it’s better to die at one’s own hand than be taken captive or face the shame of failure). So telling a story that trivializes or mocks suicide would have been a little edgy, but not all that shocking or improper.

Even so, it’s still a fairly dark comedy, and one with multiple readings, I think, that speak to SGRS‘s overarching point about the restrictive nature of gender binaries and the “separate spheres” ideology that hurts first Kikuhiko and later Konatsu. Audiences at the time likely saw this story as a comical warning against throwing in your lot with fickle, shallow women. Don’t fall for Osome. She’s only choosing you because you’re the convenient option for now (not unlike how Kikuhiko treated rakugo, as Guy Shalev pointed out), and she’ll literally dump you if something better comes along. 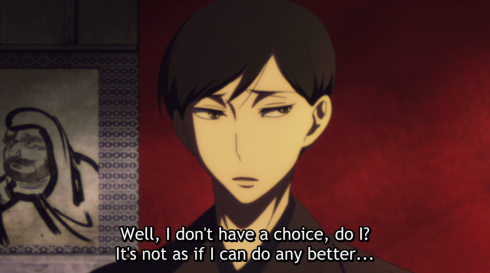 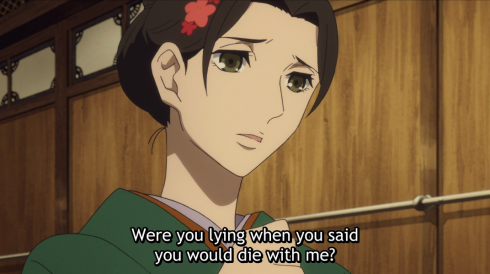 But from the other side—the side where Miyokichi herself is sitting—this is the story of how difficult it is to be an aging woman in a career where your clients value youthful beauty. Being a geisha was one of the few ways a woman could maintain some level of independence into adulthood; marriage meant retirement and a life of subservience. Older geisha often shifted into managerial or teacher positions at their houses, but if those options weren’t open, a choice had to be made between struggling to make end’s meet or losing one’s personal and financial freedom.

Seen from that angle, Osome isn’t a shallow temptress, but rather a tragic hero desperately trying to maintain some measure of control over her future in a world that grants her very few options. As a geisha herself, Miyokichi likely sympathizes with Osome’s plight, where even a sham lovers’ suicide with an indecisive drunk seems the preferable option, and is genuinely concerned that Osome won’t even be granted this measure of dignity, this one way to choose her own path.

Of course, for us at home, this rakugo piece also uncomfortably echoes in its title, “Shinagawa Shinju” (“The double-suicide in Shinagawa”), the “Shinju” in the anime’s title, too. That’s some brutal foreshadowing to insert in a final 10 minutes that should be pure triumph. Kikuhiko may have found a place where he can be comfortable, but we sure haven’t, not by a long shot.