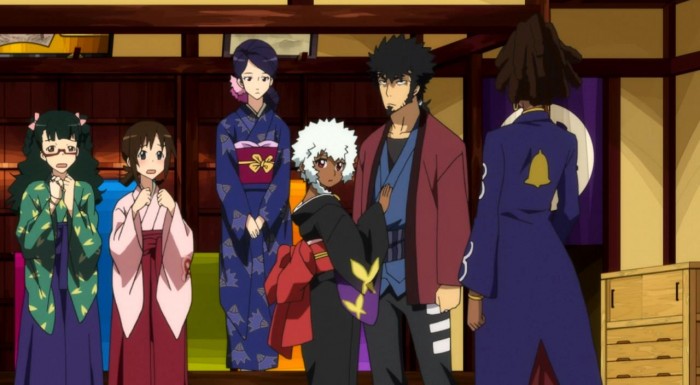 It has begun! And in more ways than one. We’re about at the half way point for this series now, and Its reassuring to see that we’re also getting to what I’d say is the very good stuff. Its definitely the sort of stuff we needed to get to at this particular point. Beyond just getting to those things, however, a big part of what makes this week’s episode so great is the way we get there. I always love it when a new story arc will kick off things in a big way, changing the status quo and pushing the story’s characters in new and unique ways. This week’s episode was just that kind of start, and it does seem to be hinting at some serious answers heading our way sooner rather than later.

Among all the various questions that have arisen in the series, the question of Kyouma’s past is probably waaay at the top. Dimension W opened up with Kyouma meeting Mira, and the audience as a whole learning of her story. We’ve gotten to know Mira pretty well, but the other half of the unlikely duo has been more or less an interesting mystery at best. We’ve been fed bits and pieces here and there of course, but the very central questions that relate to who exactly Kyouma is, have been left mostly unattended to. Why does the guy hate Coils so much? What was the whole Tragedy of Grendal? And why does Kyouma have such a disdain for robots as well? 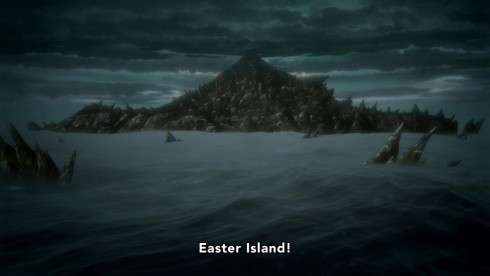 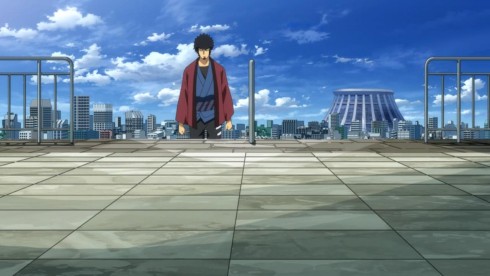 Some of that information seems to be tied to a place called Easter Island, which seems eerily similar looking to the place in Kyouma’s own flashes to the past. Moving back to the episode itself, I do love how it all really starts, with Kyouma visiting a grave and already starting to prepare to move on from and confront whatever it is that he’s been avoiding and blaming himself for.

The big event that actually kicks everything off in earnest, however, is actually the arrival of an “African Prince” (apparently Africa isn’t just a continent in the show’s version of the future) and a COO of a Robotics company, Salva. And Salva, is one heck of an odd little character. 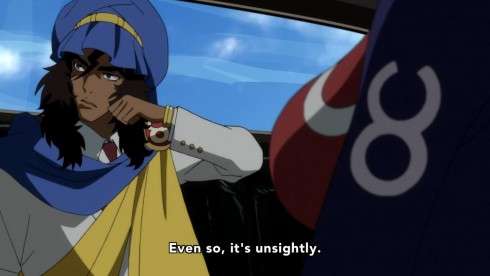 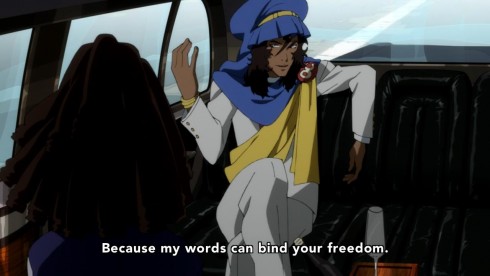 Its clear that he’s the antagonist of our latest story, but beyond that what’s particularly noteworthy is everything about his character design and his persona as a whole. Salva has all the trappings of a stereotypical prince, one that’s full of middle eastern stereotyping, arrogant prince tropes combined with spoiled rich guy tropes and  the good old evil tech businessman tropes. That’s a lot of tropes and stereotypes mish-mashed into one character.

Does it all work? Err… Well… Kind of. I mean, I’m not offended by the seriously unoriginal stereotypical “thing” we’re getting here, but because of how bordering on racist this depiction of an “African” is, I’m a little peeved and more than a little thrown out of the experience. Salva is supposed to be African, but his clothing and attitudes seems to mirror some kind of middle eastern desert dweller from the dark ages, more so than someone who’s from Africa (the continent). His personality itself isn’t anything too original, nor too noteworthy, and the guy as a whole isn’t all too likable. 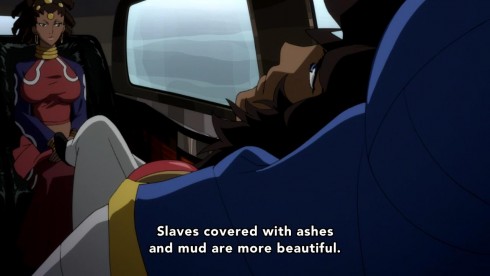 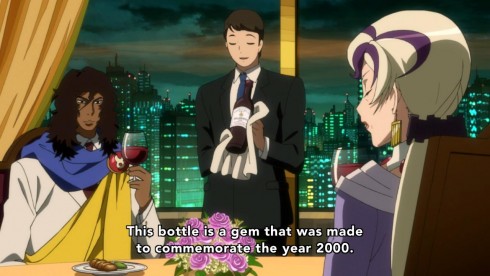 The way Salva treats his assistant/robot Lasithi, how he goes on and on about slaves and beauty, and how he treats his own brother as a pawn make him a character that’s just disgusting, offensive and in no way endearing.  I suppose that’s the point though, because Salva probably isn’t the kind of character that you’re supposed to like. The show definitely achieves that particular goal, even if it is a bit steeped in ignorance. Basically, my first impressions of the “Wind of Africa” aren’t all too great, but I do think he’ll do fine as villain, racist stereotypes and cultural ignorance aside.

The one character that is a bit likable, is Loo (Lwai-Aura-Tibesti), even if he too has some of his own cultural ignorance. Loo, the younger prince from Africa (heh), is the stereotypical gaijin, the foreign tourist that seems to have this very odd and idealized version of what Japan is and was. The kid is charming, and kind of nice, but its clear that Loo’s lack of cultural sensitivity and weird Japanese fascination is meant as a sort of counter point to his brother’s outright racist interpretation. Again, it kind of works, if only because at his core, Loo is a nice and likable kid character, regardless of his depiction and character traits as a whole. 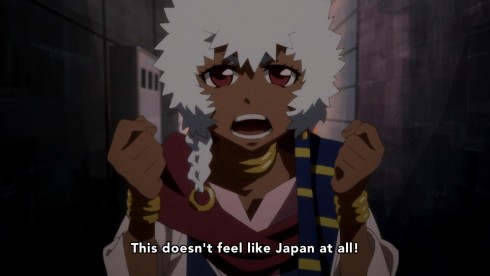 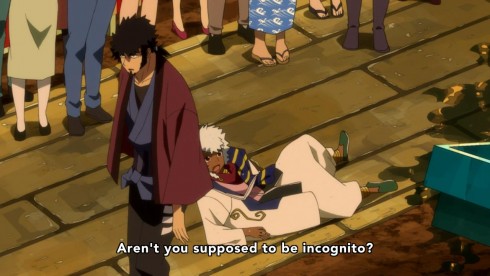 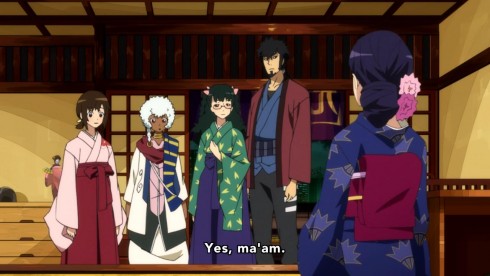 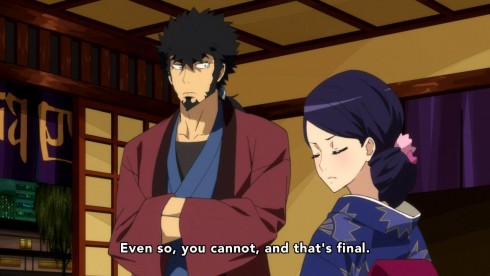 Now, Its when Loo actually runs into Kyouma, fairly early in the episode, that we start to peer into some of the really solid good stuff. Loo and Kyouma are an interesting pair to watch, if only because it feels like Loo mirrors Mira in a lot of ways, and completely diverges from her in others. He’s a bright and cheery kid like Mira, and he’s got some robotic body parts to him, but unlike Mira, he’s actually human, and his affiliation in terms of good or evil, is a lot more questionable. Its definitely nothing new seeing Kyouma befriend another kid with a weird and mysterious past though, especially one that’s equally famous and a fairly big player in the general scheme of things when it comes to the current state of the tech world in Dimension W.

The first meeting with Loo is nice, because it establishes not only his boyish charm and general good will, but because it creates a sort of friendship with Kyouma himself. Kyouma obviously helps the young prince escape his pursuers (his own guard), but beyond just setting up future events, this little adventure leads to a fascinating meeting with Kyouma’s “older sister” Azumaya Tsubaki. 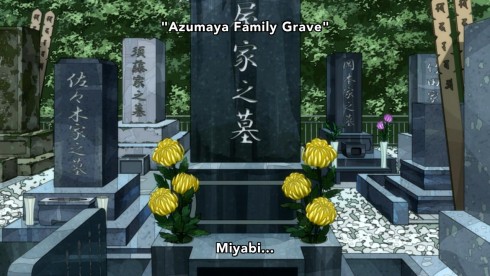 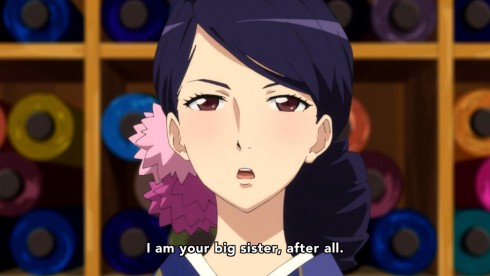 For those of us paying attention in the first half, Kyouma actually ends up going and almost visiting a grave, one that says “Azumaya Family Grave” and one where he utters the name “Miyabi”. Its not hard to put two and two together here, as its clear that Kyouma was romantically involved with Miyabi at one point in his life, and lost her but… The way the show organically throws in those little details, and interweaves it all into the current story, is just… Graceful and smooth.

Its always something commendable when a show can handle exposition in such a sleek manner, where it doesn’t even feel like exposition at all. But its through this meeting with Tsubaki, that we learn a few rather key things. We learn how Kyouma gets his wardrobe for one, we learn about the girl he loved at one point for two, and the whole thing also expands the supporting cast a touch more and provides some solid world building to cap it all off. 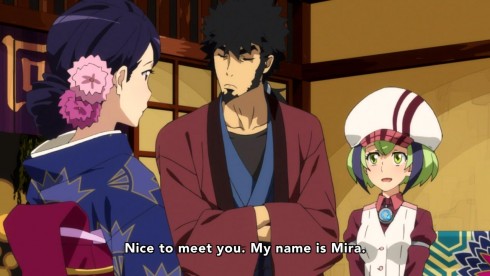 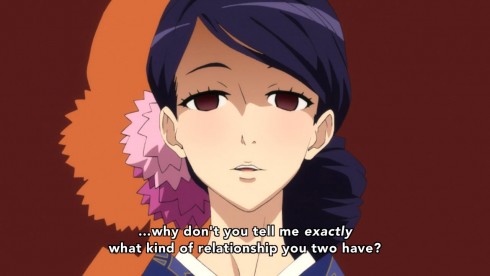 There’s some funny moments here too, particularly when Tsubaki freaks out after warmly greeting Mira, and inquires about her relationship with Kyouma XD

Of course, when things shift back over to the present, away from Kyouma, they aren’t quite as impressive. In a very classic storytelling move, particularly in anime, Loo turns out to not only be a cyborg with an artificial body, but seems to be other major enemy that Kyouma and Mira will be facing this time around. 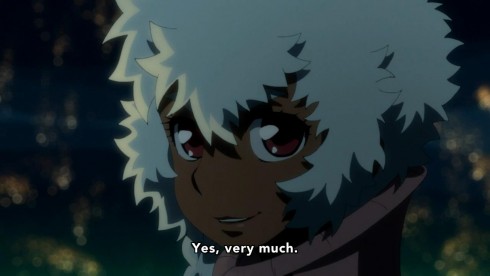 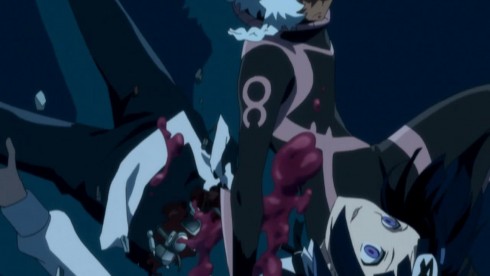 I say classic move, because its pretty much been done a dozen times over, in the anime medium. Nice, cheery kid runs into the main character, and turns out to be a strong monster, one that will end up going against the main characters later, in a strange twist of fate. I’m sure you’ve heard that one before, because I certainly have. If there’s one positive thing I have to say about this development, its that at least the show and writing is clearly aware of the tropes its riding on, and has Kyouma already “guess” what’s going on soon after Mary’s place is raided by Loo.

In contrast, the things that are interesting though, and work better, are definitely related to whatever “war” Salva is planning. The event that he’s hosting, is one that’s inviting all illegal coil collectors to Easter Island. With Mary’s prized body guard taken out by Loo as a demonstration during his initial attack, only the strongest and bravest of the coil collectors are actaully going to dare to challenge him. We know that Kyouma and Mira are definitely top tier, and given that we see a bit of Loser and whatever he’s planning with the numbers in this episode, you can bet good money that he’ll make it to the Island too. 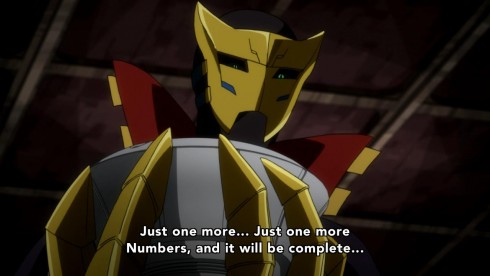 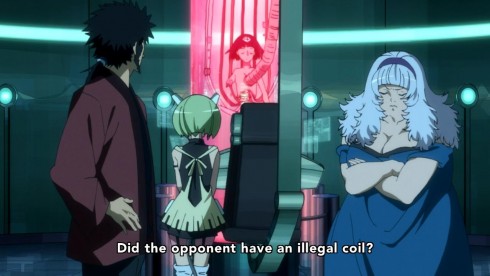 But beyond all of that, the key part of this scenario, is that it’ll force Kyouma to return to Easter Island, a place that is definitely tied to his past. And its thanks to this situation, that Kyouma himself begins to reminisce about his past, and thinks back to the time where he met the girl known as Miyabi.

That’s how we end the episode, with the start of perhaps the most interesting flashback yet from the series. I fully expect to see Kyouma story, particular his past with Miyabi, take center stage next week, and I can’t help but be excited. It feels like just the right time for the story to dive into Kyouma’s past, his issues and demons, as he himself prepares to go back to the Island from his past. 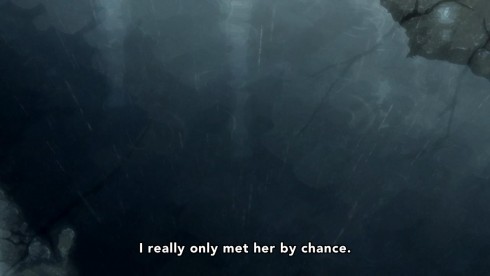 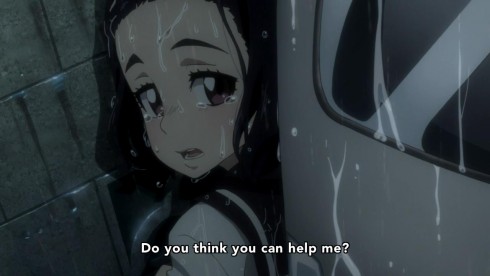 I’ll also admit to being a bit surprised, but pleasantly so. I never quite expected to see Kyouma’s story actually be told in this series, if only because its only 1 cour. Thankfully, at least one of the show’s biggest mysteries will get some development and attention before the show bows out.

Considering that, as a whole, this episode is a bit of a mixed bag. There’s a clear mix of original ideas and graceful storytelling, but there’s also a clear reliance on tropes and stereotypes that seem a bit beneath this series. I will also say that the series continues to just kill it with the animation, art direction and overall production. It all works nicely, and the story’s still got me pretty intrigued, but this is the first clear instance in the whole series where I’ve been both clearly impressed and disappointed by Dimension W, multiple times in the same episode. Ah well, where there’s no risk, there’s no reward either huh? 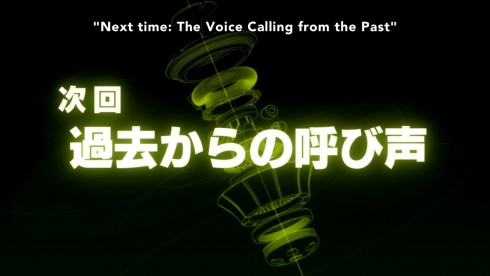 Kyouma’s past flashback episode is a go! See you next week!