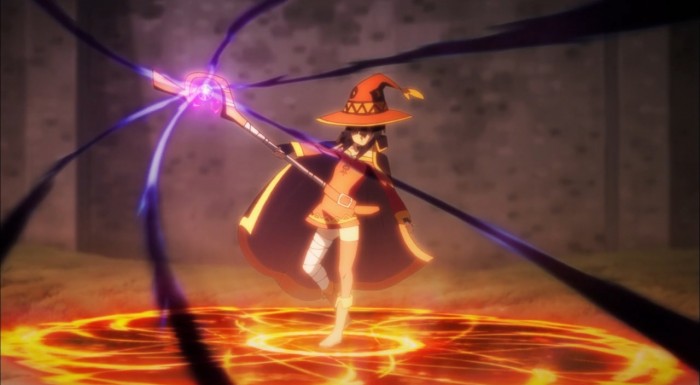 It was my plan to stay with three series for this season…but this show is too hilarious. It would be a crime to the world to not talk about this show each week. At the very least I might go crazy if I can’t discuss how darn hilarious this show is every week. So we’ll be doing a double episode special to get caught up before next week. Some shows are just too good that they demand being covered. 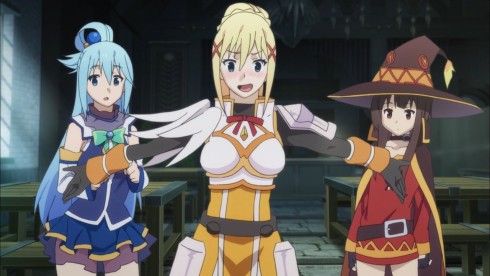 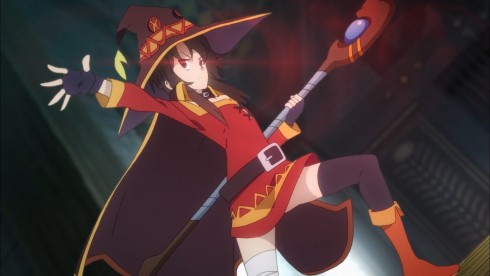 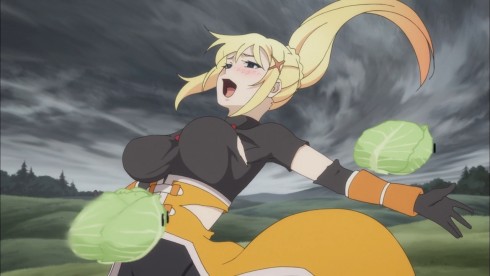 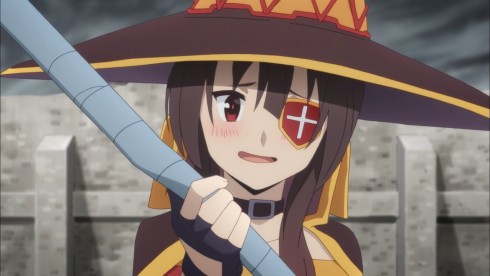 It’s kind of amazing how well the comedy just works for me in this show. It’s easily one of the funniest shows I’ve seen in a while. The second and third episodes covered the standard system of introducing the rest of the main cast. But the comedy worked so well that I was glad to have the additional characters in the mix. Megumin and Darkness are darn hilarious and that just adds to the comical duo that was Kazuma and Aqua. I can’t wait to see how the four of them interact going forward and how they deal with the various situations they run into. It’s hard for me to predict what will happen. I mean we had a cabbage attack…CABBAGES!? What can you say about a show that has the main team upon coming together (not officially, but close enough) and has them fight a swarm of flying cabbages? Well I’d say it’s a darn good show XD.

Both Darkness and Megumin are as utterly hopeless as Aqua and that’s awesome. Not that Kazuma is flawless, but he’s not as bad as this bunch. Megumin would actually be a very powerful person if she wasn’t absolutely insane for explosion magic. It’s certainly on the level of a fetish for her. She has to use that spell, she just has to. Despite the fact that she only has enough energy to use it once and then she’ll pass out, she must use it! She’s just so in love with it and so dedicated to it that Megumin is both adorable and an idiot at the same time.

Darkness is another level of “wow crazy.” Unlike Megumin though her thing isn’t about explosions…but satisfying her very extreme masochism. She wants to get right into the dangerous situations and get utterly beaten up. Luckily she is an advanced class like a Crusader and has high defense. So in a sense she can take the punishment. Probably why she geared to be a Crusader in the first place. It’s one thing to enjoy being hurt, but I presume getting knocked out would be a problem. Either way she is definitely hilarious in her own way and also very hopeless since her attacking accuracy is near zero. So she is a walking shield and that’s about it. 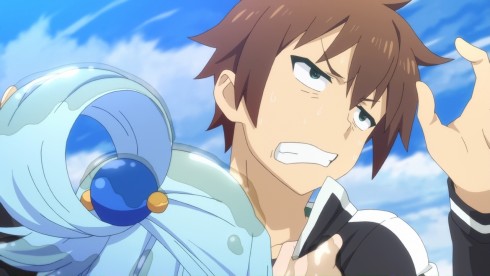 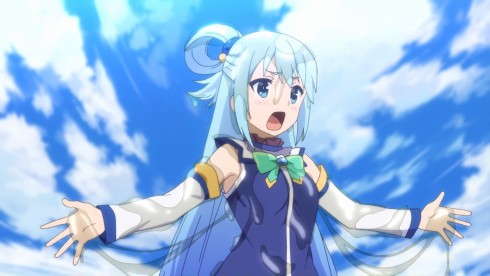 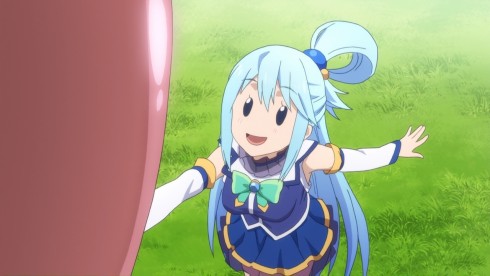 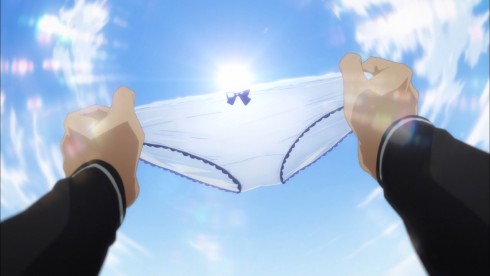 Episode 2 had all kinds of great laughs in it. Aqua’s utter failure against giant frogs was something that could keep me laughing for weeks. Her cocky attitude towards Kazuma luring in the frog and getting her eaten was great, as was her attempt to exact her vengeance upon frogs! All her godly attacks failing since they were basically just punches and that didn’t do much against the frog’s spongy body. Just that look before she got eaten by the second (of three frogs total) was just golden. This group has such good potential, but also such huge flaws that utterly weaken them. Aqua has potential as a powerful healer, but often spends most of her time rushing into trouble or just using party trick skills.

It really is often left to Kazuma to pull it together. He defeated 4 of the 5 frogs they took down in episode 2 and captured a ton of cabbages while Darkness was being knocked around and Megumin unleashing a nuke upon them. But Kazuma is hardly perfect. He picked up some useful thief skills, but then went somewhat nuts when his first steal took the panties from Chris (the thief girl). All the embarrassing things said in the guild after appear to have been things that Kazuma himself said, just that…it sounds pretty darn bad when repeated in a public setting. But in the end he was the one waving them around in the air like a lunatic. His high luck coming into play with this situation. Stealing something like that would be nearly impossible with all the items and clothing a person would be wearing. But his super luck probably lets him steal something of high value like that (personal value anyways). So while he can’t pick his target, he can make improbable things happen. In the end it’s just that Kazuma can be more rational and does recognize that their party is full of hopeless individuals. 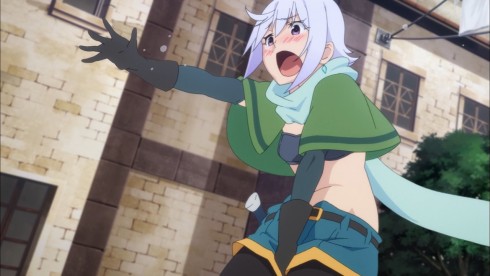 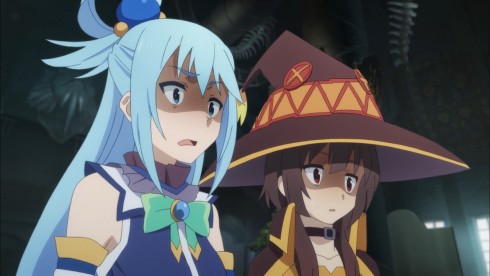 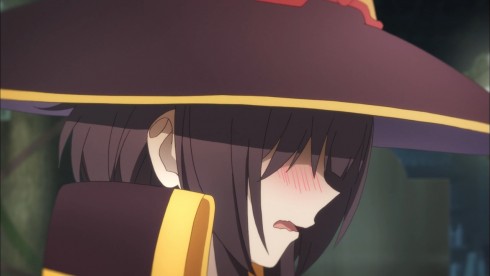 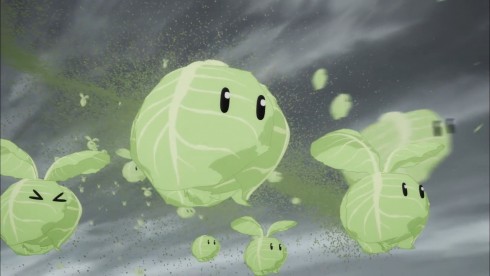 In the end this show is just really fun. It’s got a cast full of flaws, but are all entertaining individuals. Darkness’s goal of being used as a wall by her party, Megumin just wanting to use explosion magic, Aqua being pretty dumb, and Kazuma overreaction to stimulating situations (such as stealing panties). They all have their flaws and are all entertaining to see in action. All of them have their quirks and issues which is fun to see. In the end it just works. The mix of personalities and how they get their moments of glory and moments of failure just leaves me laughing more often than not. If I can keep watching this show and getting to laugh then I’m pretty happy. These posts may not be too long since there’s only so many times you can say a scene is hilarious, but I’ll get on board with Konosuba for the rest of the trip.