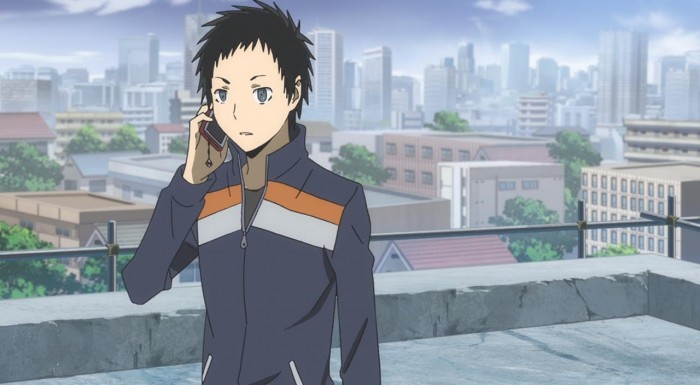 With each successive episode, Durarara!!x2 Ketsu gets markedly better, and with it, I get a bit more optimistic, albeit cautiously. This was the first week in god knows how long where I’ve been riveted and interested in everything that’s been happening, from beginning to end. That used to the general stats quo when it came to Durarara!!, at least in its first season, so it was nice to get ever so close to that time in the franchise where the show just did it all right. 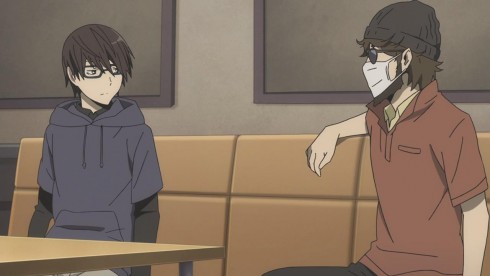 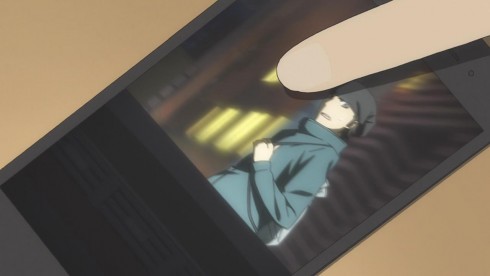 I think my feelings on Durarara!!x2’s continued improvement have a pretty great analogue in the episode itself. Its that moment when Hiroto Shijima meets the dude in with the face mask. The Face mask dude, in this case, beyond just being Dotachin’s assailant, is also the show of Durarara!!x2 itself, and I’m Hiroto. The show is presenting a really intriguing prospect, just as my back’s to the wall and I’m long past what I’d call my limit for boredom. Yet here we are, and the show is finally starting to pick up steam, become infinitely more interesting, tackle its main issues and all that stuff that it should have been doing from the get go.

Its pretty bizzare, but whenever Durarara!!x2 does a few simple things right, it just totally jumps in quality. This week, it does nearly all those things. The first of those things, is focus. This week benefited from a renewed focus on one or two key things at a time. Whenever a story or an episode tries to tackle too much, it never ever works in the show’s favor. 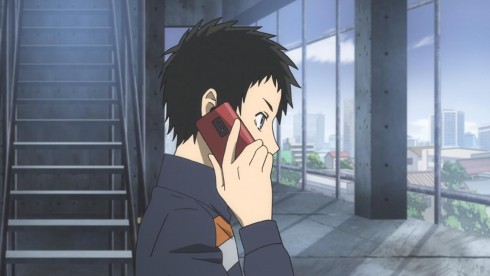 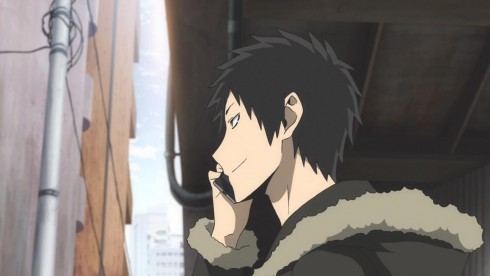 So having half an episode dedicated to a talk between Izaya and Mikado, was such a good decision. This conversation would be something that’s been a long time coming, but it also attacked at the heart of one of the most important questions ever. What the hell went down with Mikado? Did he really lose it? Its something that even Izaya himself hasn’t been too sure about, so seeing their exchange of words, was fascinating.

See, I think often times, Durarara!!x2 has the bad tendency of being self absorbed in its characters’ own weird philosophies and thinking that they’re actually sound and believable. Izaya’s whole “I love human observation” shtick is still something that doesn’t quite add up, even if both he and the show believe it does. But Mikado and his whole idea and reason for doing what he’s doing? I’ll give it to the show, it resolved the whole idea in a way that was both consistent with his character, and just made sense as a whole. 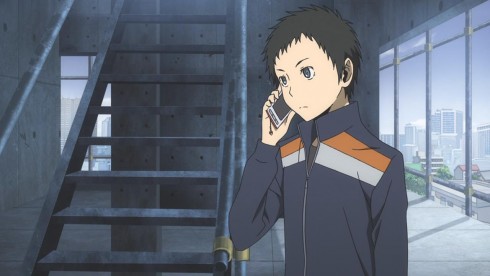 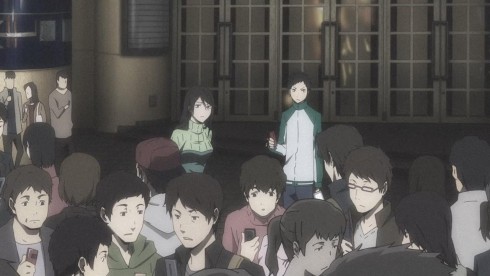 Mikado’s character, in essence, is all about escaping from the mundane, and finding thrills. Living in the abnormal, the absurd, and constantly being able to experience new things. He’s always been an interesting character in that he’s seemed the most normal, but always been secretly hungering for the extraordinary, the bizarre. Its not something that’s un-relatable, especially for the audience that’s watching Anime and stories in order to see something that they can’t find in normal life themselves.

Mikado craves a constant escape from the norm, and in order to feed that urge, he’s doing outlandish heroic or villainous things. Whether it was saving people using the Dollars, or creating a world where Anri, he and Kida can live peacefully, those are just goals and “things to do” to keep himself from getting bored. Its the simplicity of Mikado’s character, that makes the whole idea such genius. It puts all his actions into context, whether we’re looking at him from the first season or the second. 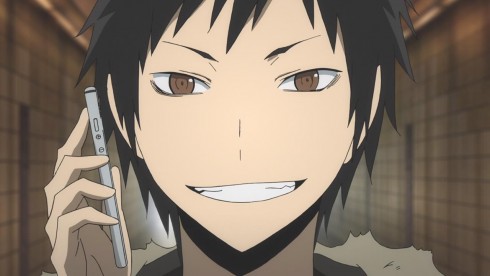 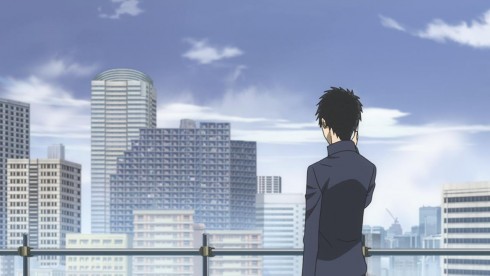 But there is a difference here, because as Izaya himself realizes, Mikado’s evolving, just at an absurdly “normal” rate despite his circumstances. Its almost impressive how “normal” and “unchanged” Mikado is, despite all the crazy stuff that he both sees, knows and experiences on a daily basis. And its that evolution, that’s brought Mikado to the point where he’s having a conversation with Orihara Izaya, as equals.

Yes, that whole idea isn’t at all lost on me, nor is it on Izaya. How clever, how much more aware and concious Mikado has become of everyone, including Izaya, was a joy to behold. Its just great to see that character growth, in a way that’s both believable and entertaining. In the end, Izaya and Mikado have become similar entities, and I’d say that by the end of the conversation, its pretty clear that Mikado has more or less graduated to the big leagues, the leagues in which I’d say only people Izaya and Yodogiri Jinai have played thus far. 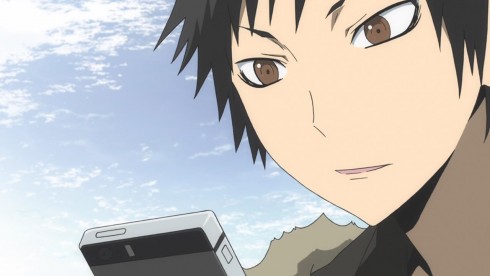 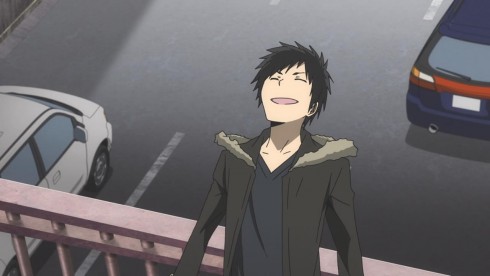 And while the conversation itself was pretty entertaining, I’d say that the other part of the whole thing that just amped up the excitement and anticipation was the fact that Izaya himself wasn’t aware of the whole Celty’s head situation. So a big part of the conversation’s fun was in the wait for Izaya to finally realize what had gone down, and see his reaction.

Izaya not being aware of something is rare, so there was just a nice sense of freshness to the whole idea of something as huge and monumental as Celty’s head being released in the wild without him noticing. Honestly, I had expected Izaya to actually get angry or shocked, but what we got was laughter and amusement. Being surprised I think, whether its from Mikado or any other character, is the thing that I think Izaya enjoys the most. Its HIS real reason for living, and why he has that whole “I love observing humans” thing. In the end, I guess he and Mikado aren’t all that different after all. 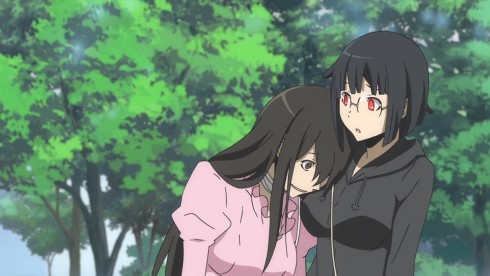 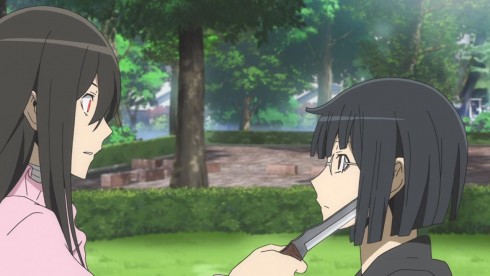 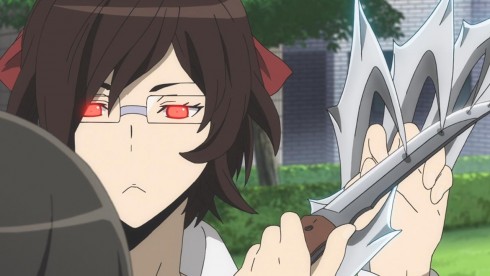 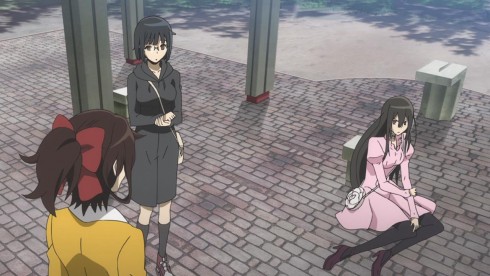 Of course, while Mikado and Izaya stole the episode with their rather riveting conversation, there was a solid B-storyline that was interspersed in between segments of their little chat. That story featured none other than Saika Weilders Anri and Niekawa. I’ll be honest, I don’t quite care for Anri’s big crisis of humanity because despite everything that’s happened, she continues to act like a passive character. She’s someone who gets swept up by the plot, rather than be someone that actively drives it in some interesting direction. Unlike Mikado, Kida, Izaya, Celty or the others, Anri just hasn’t done anything interesting beyond her initial reveal in season one of being/wielding Saika.

The more interesting aspect of the conversation, was Niekawa and Kujiragi. Kujiragi being a few centimeters away from both Niekawa and Anri added the same sense of intense anticipation that we had in the Izaya/Mikado conversation. Where was this going to go? What was going to happen when these three Saika weilders converged on the same location? Those were the questions that made this particular storyline interesting. And in the end, I’m not sure what Anri’s role is going to be in the story going forward, but having Niekawa and Kujiragi develop an animosity and rivalary is something that makes both their characters infinitely more interesting. It’ll be interesting to see where this particular storyline goes, as unlike the Izaya Mikado conversation, its not quite over yet. 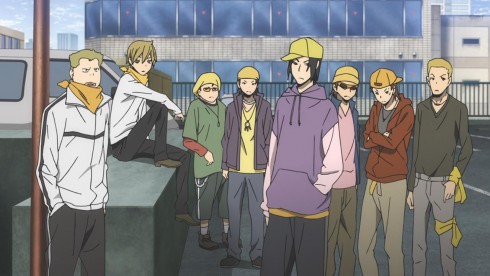 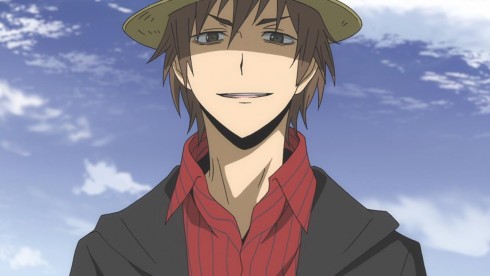 There were other bits and pieces of setup in the episode two, but thankfully, a lot of that stuff happened near the end of the episode. Again, that’s going back to a pattern that worked so well in Season 1. Cover one major plot point, maybe two in the main episode, and then use the last few moments to setup whatever’s coming next. In this case, there was that whole talk between Amisbaena bro and Kadota’s assailant, but then there was also the whole thing between Chikage and Kida.

I confess, I didn’t expect Chikage and Kida to trade blows, or come into conflict, but its a welcome change none the less. Chikage is an interesting character, one with a sense of charisma that makes any situation interesting. And quite frankly, Kida’s needed something to make his storyline relevant until his eventual conflict with Mikado takes center stage. 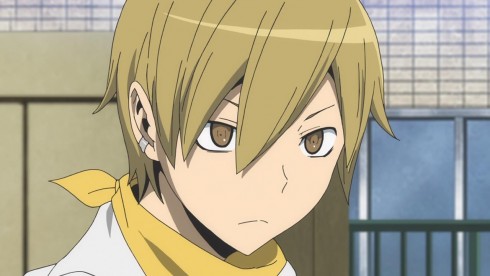 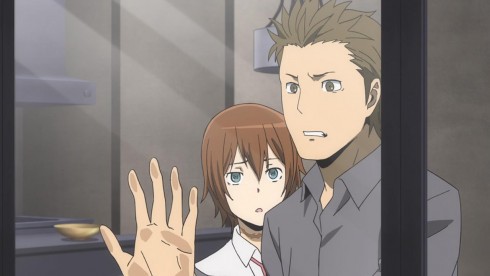 Is there a danger of too many storylines happening at the same time? Yes there is. But if Durarara!!x2 carefully, and calmly tackles two ideas at a time, per episode, then there actually is a chance for this last cour to turn out to be good. And I think one thing that I find myself wondering, is why we couldn’t have gotten to this episode, and this point of the story sooner. It feels like Durarara!!x2 Ten was a pretty huge waste of time, save for an episode or two, and that if all that had been trimmed out, we would’ve gotten her, to the heart of the story, a lot faster. I just hope we keep moving forward like this, with the same kind of focus. Come on Durarara!!x2, you can do it! 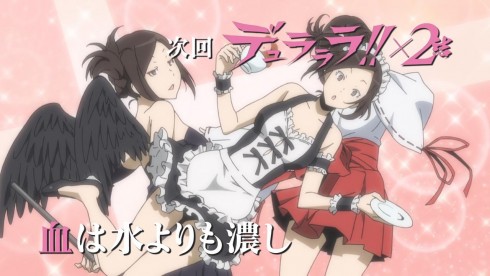 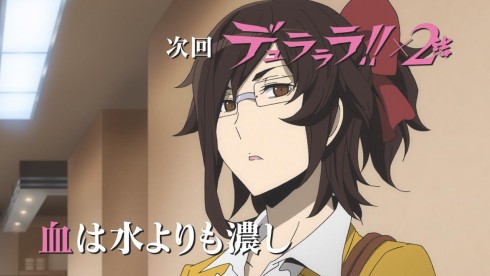 Seems like next week we might be back to tackling a few more than 2 things at a time. Lets see if Durarara!!x2 can keep the solid momentum from the last few episodes going.