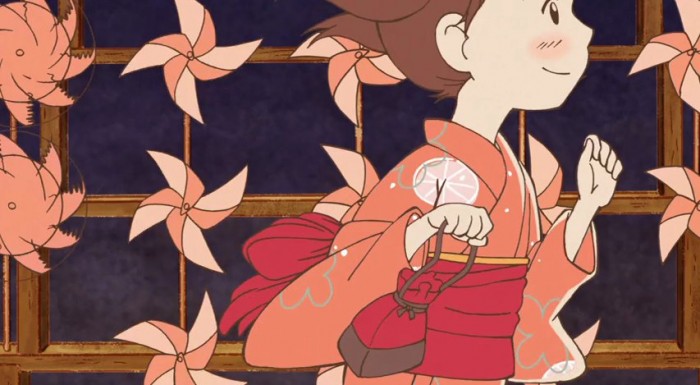 I hope you will pardon me while I fly off the handle for a second here. This episode was so well written, so simply presented and effectively executed that not only was I moved deeply (it was “quietly and gently heartbreaking”), but I was also made a little indignant. Why can’t more writing in anime be like this?! What is the problem?! This and the previous two episodes more than shows that the talent and potential is there. Argh! Okay – rant over – I know, of course, some of the main reasons, and one of the biggest is simply that things like this don’t sell well, and anime that focus on other elements that appeal to certain targeted audiences sell well. Anime is a business and the like and bills need to be paid, etc. Even so, it is frustrating to see such sterling writing shining out like this and see such sloppy writing and treatment of other series. 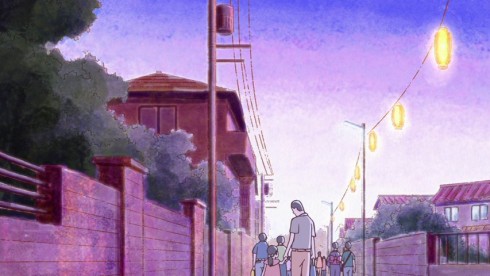 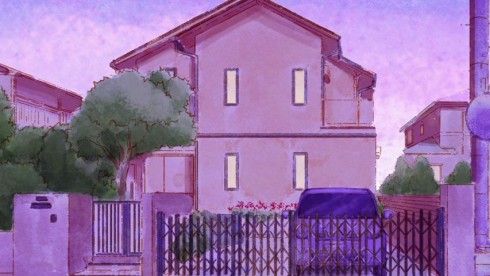 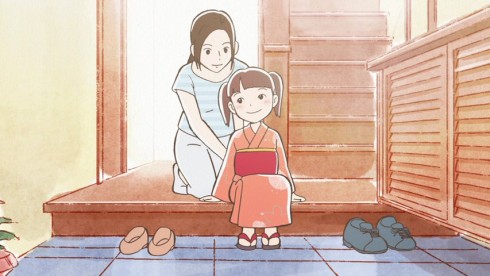 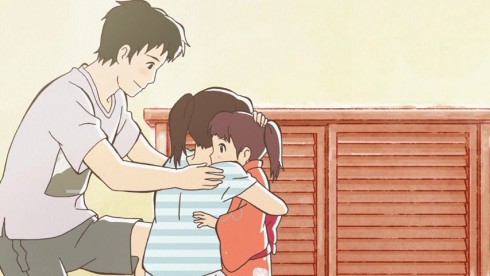 The strength of this episode is simple … it takes a storyline and suddenly turns everything on its head in a split second of a moment. And does so with such effortless grace that the viewer stops for a second and says “Oh … oh! … Whoa … just … wow. I was not expecting that!” and then all the previous (albeit brief) interaction between the characters in the episode up to then takes on a completely different shade of color and meaning as well. I must admit that before that moment I got an intuition that everything might not be as it seems from the brief scene of Yukari running along laughing in front of a festival stand featuring nothing but pinwheels. As she rushes by the screen all the pinwheels immediately begin to spin for a brief moment, but far longer than would be normal. For those who are familiar with Japanese culture (it shows up in bits and pieces in some anime) the pinwheels spinning are often associated with either the afterlife or the realm of “faerie”, and in particular they are associated with children and the afterlife. 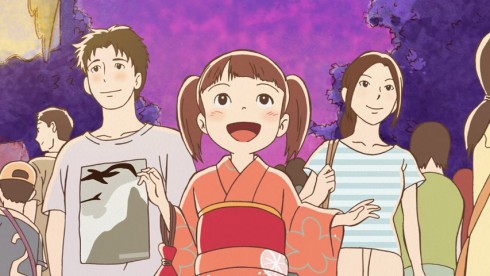 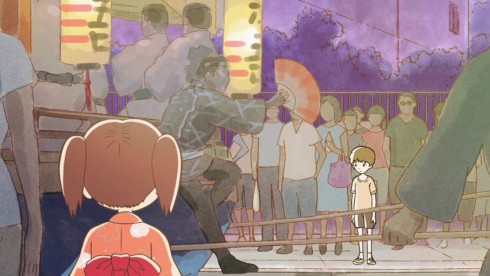 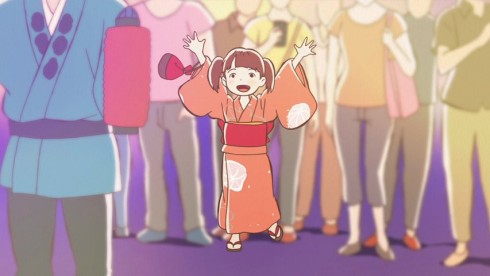 The narrative of the episode proper begins with a small family getting ready to go to the local Obon festival (also named the “lantern festival”). The young girl, whose name is Yukari, asks her mother what the Lantern Festival is all about, and receives the answer that it is when “people who have passed away come back to visit this world”. After thinking a moment Yukari asks her mother if that means she will be able to see Haruka? At which she is embraced by her mother tightly and reassured that yes, it may indeed be possible. 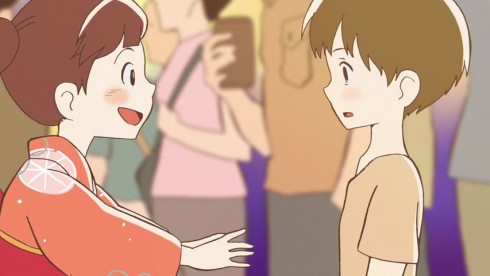 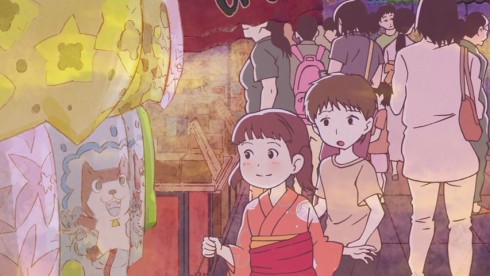 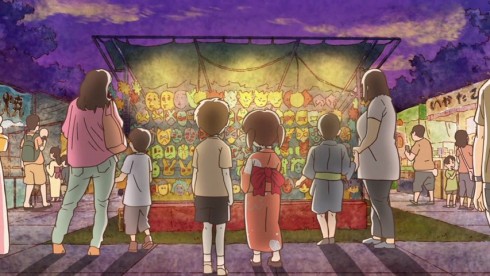 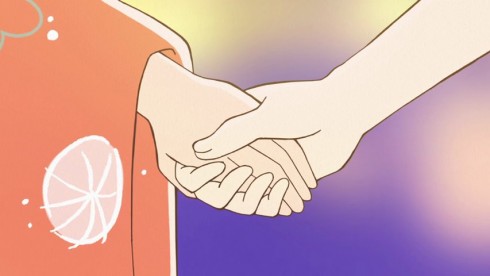 From here Yukari and her parents head to the Obon festival and, sure enough, Yukari comes across a forlorn Haruka standing and watching the festivities by himself. She is delighted and starts jumping up and down to attract his attention. Haruka looks absolutely shocked, but is quickly pulled along into Yukari’s joyful and cheery flitting about the festival proper as they look at the stalls and the other activities. Haruka is very subdued the entire time, but is obviously happy to be with Yukari. This spending time together (where did Yukari’s parents go?) lasts right up to the end of the festival itself, when after a moment of silence Yukari turns to Haruka with tears in her eyes and sadly asks if Haruka will disappear if she lets go of his hand? And will she ever get to see him again? Haruka looks very awkward and sad, and says that he thinks he will be able to see her whenever she calls for him. The two separate, and Yukari is shown heading off to the festival grounds alone while Haruka is with her parents again heading home. 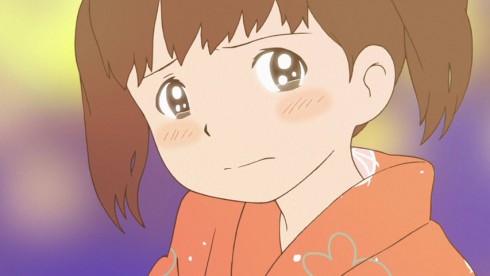 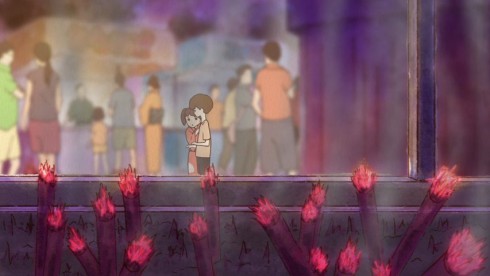 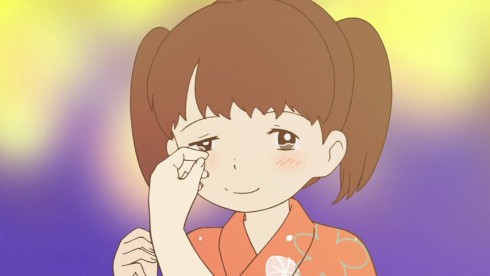 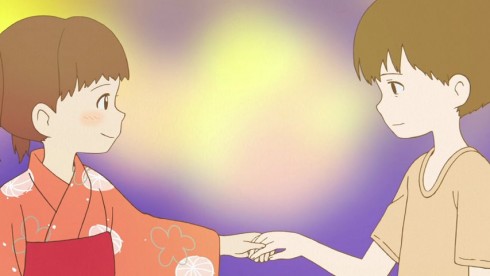 It is here that everything changes … we see a scene where the home to where Yukari and her parents are heading is shown to actually be a charred pile of rubble and Haruka interacts with other boys his age who he meets and on noticing him they ask if he is okay as he looks pale. In only a few seconds we see the truth of what has been shown. The spirits of the dead visiting were actually Yukari and her parents … Haruka was sad and alone because he missed Yukari, and he was shocked on seeing Yukari at the festival and interacting with him. At the end of the episode Haruka is quiet and pensive, and lifts up a pinwheel, and after looking at it for a second blows into it and causes it to spin around … obviously remembering Yukari and the time they had just miraculously been able to spend together….

So simple! And yet so beautifully done! And what an impact it made. I admit it – I misted up and cried a little. It really was a lovely thing, and I can only express gratitude to the staff that made these short episodes available to the viewers this season. It may be … it is possible that they are among the best of any short series I have seen, if not THE best.