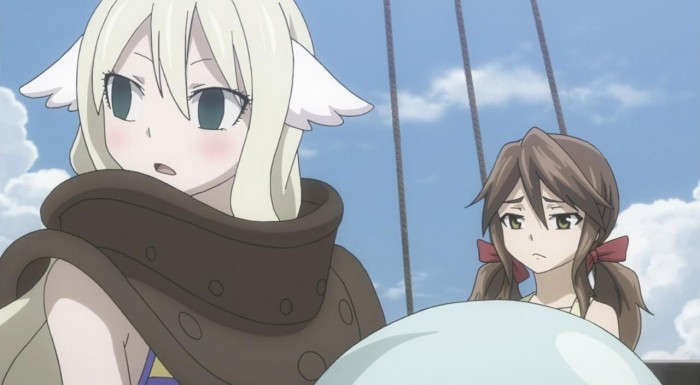 Well that turned out quite splendidly, even if it was just a “filler” episode. One of the most surprising things about Fairy Tail Zero, the prequel arc that we’re getting right now, is the fact that its just been consistently good so far. Whether its filler material, or stuff from the actual source material, there hasn’t been a point yet where I’m bored, or feeling uninterested in the slightest.

That’s a pretty big accomplishment if you think about it, because Fairy Tail has often had problems with story extension or filler content in general. Going into this week, I knew that what we were in for was a filler story, so my expectations were a bit lower than usual. What I did not expect, however, was this filler story to actually be fairly interesting and intriguing in its own right, and to feel like it was indeed a fitting part of the overall tale that we’re diving into with Mavis and the creation of Fairy Tail. 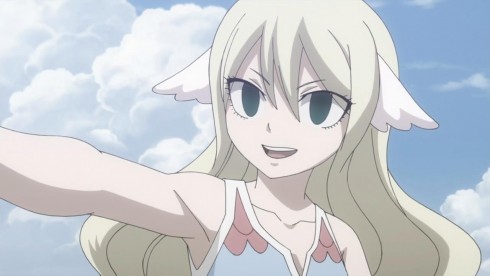 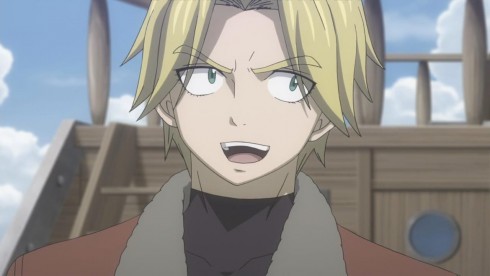 In some ways, talking about episodes like this one is never easy. It kind of speaks for itself, doesn’t it? The episode works, it’s good, it not amazing, nor does anything too notable happen. Simply being good when the main narrative isn’t moving forward, however, is STILL a pretty big achievement. Even more so because Fairy Tail (in animated form) has done filler content before, and its always been a combination of hit or miss moments.

Why does this week’s episode, an episode about Mavis, Warrod and Yuri diving underwater for some treasure hunting work? I suspect its because there’s no shoehorned comedy. I look back to some of the filler episodes that I’ve hated, and some of the ones that I’ve loved, and its all boiled down to the humor in those episodes, rather than the story. Humor, on its own, can be pretty hit or miss, and while Fairy Tail generally does a decent job of commanding humor when Mashima-sensei is at the reins, its rare for the show to succeed without his guiding hand. 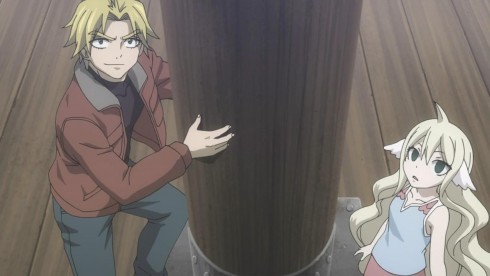 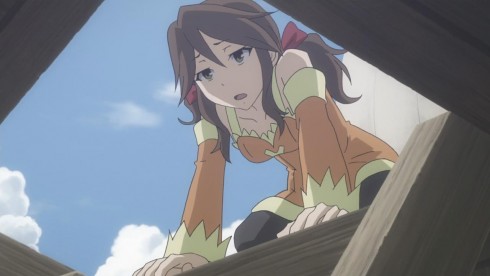 I don’t think we’ve actually ever seen a filler episode that wasn’t about some kind of funny story, and the few that we have, have been pretty good. That’s why this week’s episode went down pretty good with me, because it was about the characters in question acting pretty much like themselves and not playing the joker or the straight man.

In a lot of ways, Fairy Tail Zero seems to be a real opportunity for both Mashima-sensei and the Anime Production staff to try some really new and different things. Last week it was that awesome battle of wits between Mavis and Yuri, and this week it was about a fairly standard treasure hunting story, and about seeing Mavis, Yuri and Warrod working together. 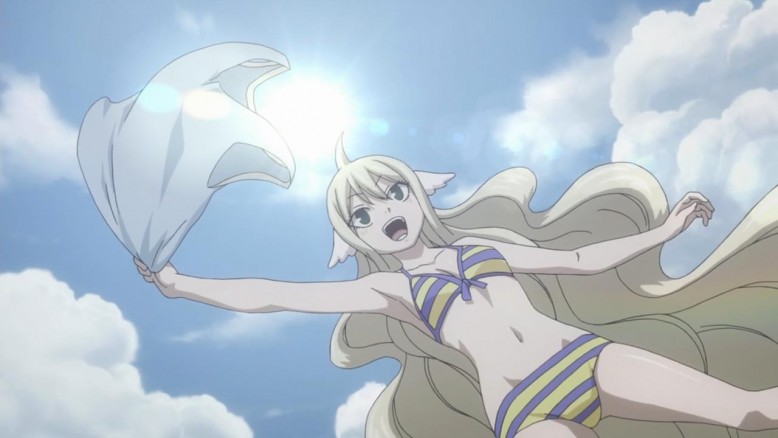 I also believe, that the whole point of any kind of story chapter, or episode, should be about telling us something new. That something new can be something like moving us forward in the timeline, and have the next big event happen, but it can also tell us something fairly small but interesting about the story’s core characters.

In essence, that’s what I’d say this week was about. It was about showing us that for all the capability and knowledge that Mavis has, she’s not perfect, and she just struggles and drives her way through situation. It is interesting to note, that whatever power Mavis may have, we don’t see any of it this week. Mavis almost seems like a young teenage girl, that’s just a bit smart, but doesn’t really have any magic or fighting capability.And that’s interesting, its interesting to see Mavis start off as a character that’s more brains than brawn. Now, this could very well be something that’s just part of the filler episode itself, but I almost enjoyed the fact that this particular storyline showed us a Mavis that wasn’t super powerful, and got through her problems by some quicki thinking and the skin of her teeth. 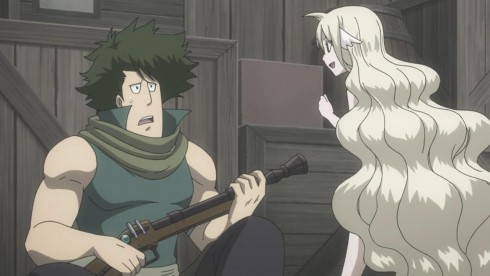 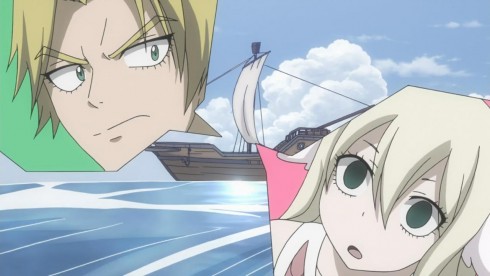 But beyond just showing us Mavis’s good points, the episode also shows us that Mavis is curious and earnest, almost to a fault. Her purity, her willingness to explore can sometimes actually be a problem and a burden to those around her, as much as it can be an asset.

The fact that the show, in a filler episode at that, can show us that and highlight it, is a pretty impressive accomplishment. And while the focus was definitely on getting us even more familiar with Mavis, there was another thing this episode did. It finally brought Warrod into the Yuri/Mavis team dynamic. Through this episode, I felt like Warrod actually got to connect with Mavis, in the same way Yuri had done in the last episode. 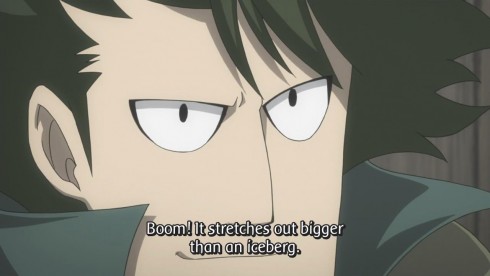 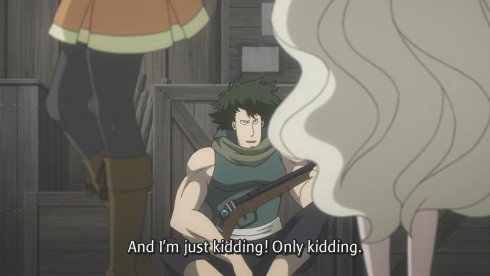 We also started to get a sense of what kind of person Warrod is in the past, versus who he becomes in the future. We’ve seen the old, quirky wizard that seems to love messing with the youngsters in the Village of the Sun Arc, and I liked that there was a bit of a connection and even some foreshadowing to those aspects of his personality. Warrod has that aspect of making outrageous statements, and then following them up with “I’m only joking”. He’s not entirely funny, but he’s also pretty darn obvious to the point where it actually isn’t as obnoxious as it is when we see him in “the future”. Solid character continuity, again, its those little details that really sets Fairy Tail’s world building and character building apart.

And to top it all off, I was also impressed by the fact that I could never predict anything to the letter in this episode. Yes, the story was a fairly standard one. Mavis wanted to help her new comrades, so she went off on her own to try and get some treasure. She gets in over her head and then has those same friends come in and help her out. 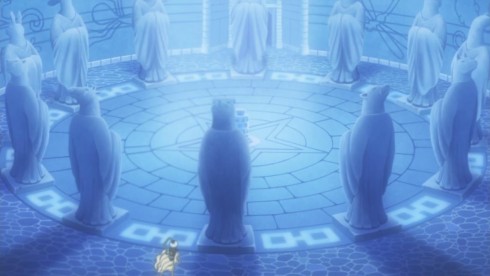 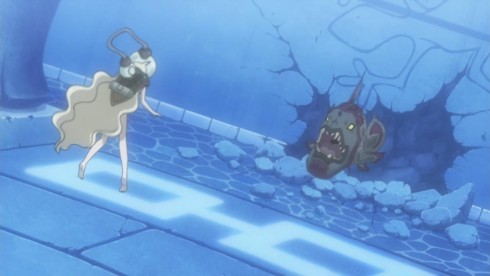 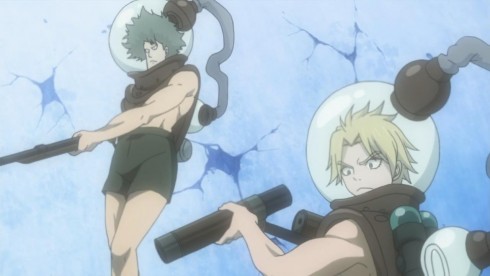 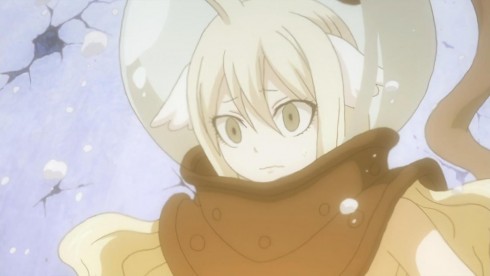 In the standard scenario, Mavis would probably apologize and promise not to be so rash and what not, but that isn’t quite what happens here. Instead, I think the most surprising moment of the episode is at the end, when Warrod, Yuri AND Mavis all show their spoils from their little adventure.

I’m not entirely sure how or when Warrod, Yuri or Mavis hand time to grab the treasure that they so gallantly show off at the end, but its not like there’s no room in the timeline for it to happen. In the end, its a nice little twist on that established formulla, and its something that just brings this whole story and episode up a little bit beyond the norm. 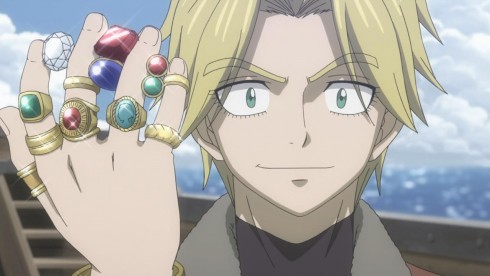 Plus, in its own way, this episode does serve to drive the plot forward by giving Mavis and the rest some funds for financing their journey. All’s well that ends well I suppose.

By the end of the episode, we get a simple but unpredictable little story, we learn a few new things about Warrod and Mavis, and we also tie up some logistical plot points, all in a friggin filler episode. Yes, Its nothing to write to home about, yes its just a slightly above average episode, but Damn, it a filler episode that works. That’s a huge win for Fairy Tail Zero, in my book. 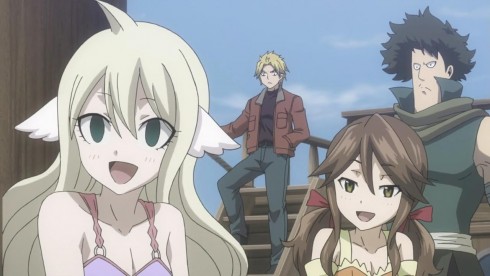 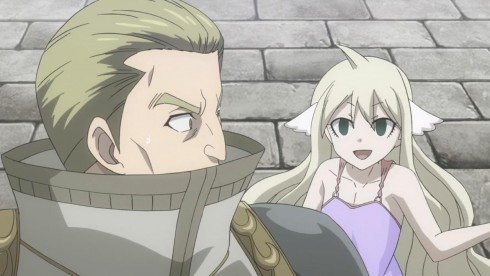 Seems like next week is all about Mavis and Purehect/Purehito/Master Hades. Now THAT will be pretty darn interesting to see. See you next week!