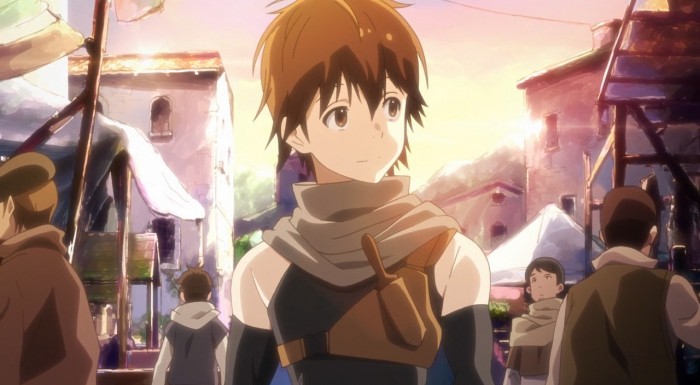 A really strong second episode for this show. Just makes you think this could be a really good one. This series just knows what it wants to be and is doing it in such an extremely well done manner. Very much what the title of the episode said this would be. It was a single day in the life of these volunteer (ha) soldiers. Seeing the most extreme of activities in fighting to the aftermath of them. This was an episode that really just pulls you into the world.

The lives these characters are being made to live are pretty darn tough. Fighting against monsters, taking what bits and pieces that they need in order gain the money to survive and having to just absorb the weight of what they’ve had to do. Just the constant repetition of that would take a toll on anyone. These are kids who have no easy memories of their pasts and the world they’ve come from, just these subconscious memories and terms. Haruhiro can remember that the moon shouldn’t be red, but hard to say if he remembers exactly what the moon should look like. 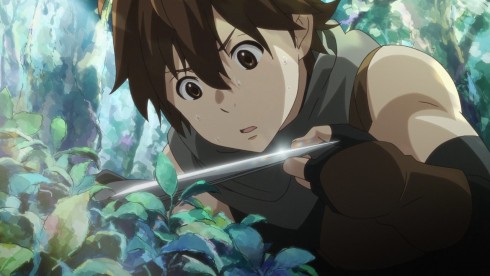 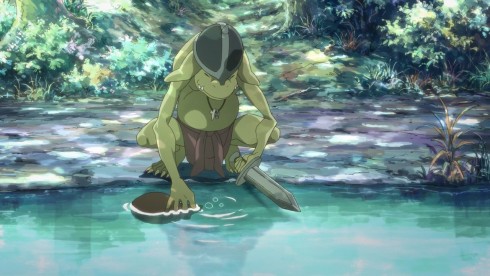 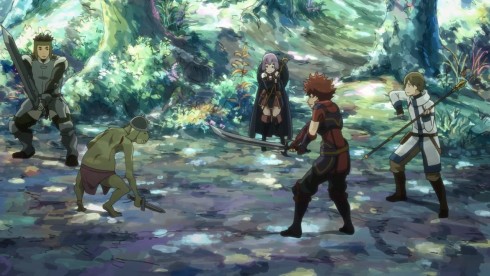 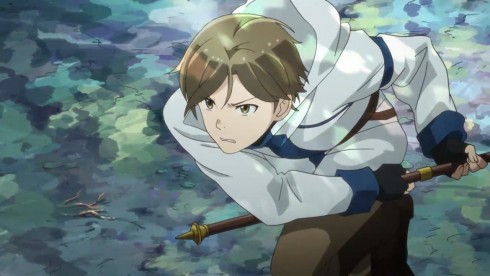 Certainly the highlight of the episode was the opening battle. That was some of the most intense fighting I’ve seen in a while. Even with magic attacks and healing it was a brutal melee. The whole fight just perfectly reflected this series. These kids really don’t know what they are doing, they just have very basic training. You start off the fight with Ranta…being an idiot. There’s just nothing else to do there. The stealth was ruined with that idiot yelling and swinging his sword at nothing, I wasn’t sure if he was just stupid or went insane. Things just went nuts after that point. Haruhiro fighting as best he could even though a thief should not be your initial melee option. A nice move by Yume to cut off the retreat of the goblin with an arrow. After that things just went crazy. You had Ranta’s attacks, Shihoru’s magic blasts, and even Manato swinging into the fight.

What’s insane is that this was all about fighting one goblin. There were six of them against one opponent and yet it was a brutal struggle. They really had a tough time and the stress of the situation continued to wear them down. When the goblin started screaming I wasn’t sure if it was calling in help (which had me scared for the group) or just yelling out. It turned out to be the latter, a representation of the frustration and terror this creature was dealing with. Here it was gathering water and gets basically jumped by a gang. It was ready to fight and would take as many with it as it could. Definitely it made a serious effort. 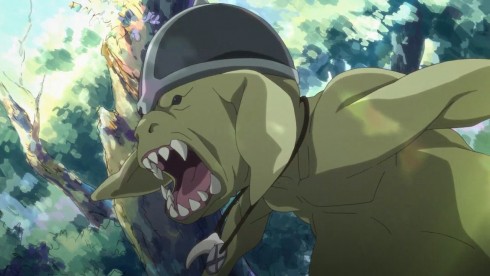 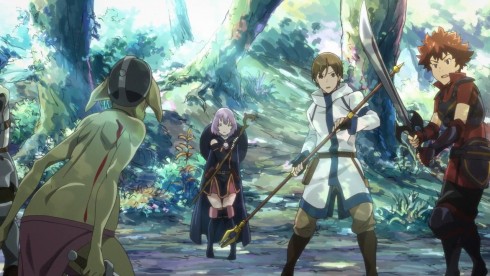 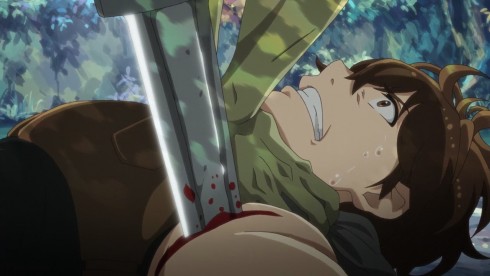 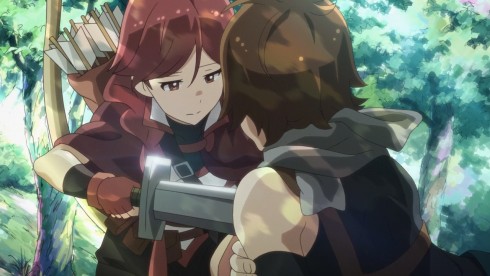 The fight was never easy though. A lot of shocking moments in there. When Haruhiro got stabbed in the shoulder that was pretty damn intense. The guy with a blade in him was then being choked by that thing. Sure, there was help around but it was possible everyone would have frozen up until it was too late. Another moment that surprised me was the lack of damage Shihoru’s magic caused. Kind of lacking in terms of punch. Though it did work as a distraction and slowing down the goblin. Here’s hoping with some time her ability to do damage will improve. After all weapons will hurt even with guys this unskilled using them. But apparently magic only reaches lethal levels after some training and growth.

The end of the fight was just rough. Everyone had calmed down after thinking the goblin was out, taking some time to vent…and then it got up. They’d really only stunned it with the overhead blow and it was ready to run like hell. Ranta’s efforts were needed and good for the group, but also horrifying in a sense. I suppose it should have been horrifying in the first place. But, regardless it was scary. He was just stabbing away and attacking with an almost crazed ferocity until finally it was over. Ranta was as horrified as anyone I think at the end result. He and Haruhiro just realizing how covered in blood they were. Being the front line attackers they have to carry a heavy burden of killing up close and really just absorbing the reality of what they’ve done. That was really well done I think. Killing is often pretty light in games and shows, but here the bodies just fall. Nothing shocking happens here, the body is just there and the cast has to loot the corpse.

I did also appreciate that Yume went to help out Haruhiro with the sword he had stuck in his shoulder. You can’t heal a wound until you’ve dealt with that issue. I suppose anyone could have done it, though really pulling a sword out of someone you know probably isn’t easy. I think it reflects on her compassion for those around her that she was the first to make a move there. 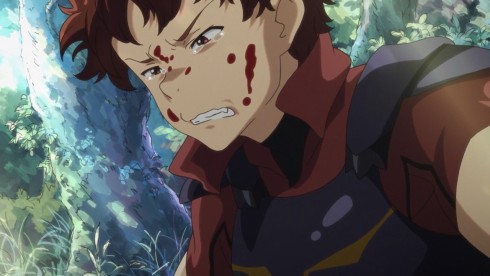 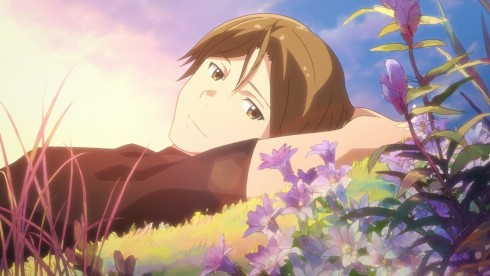 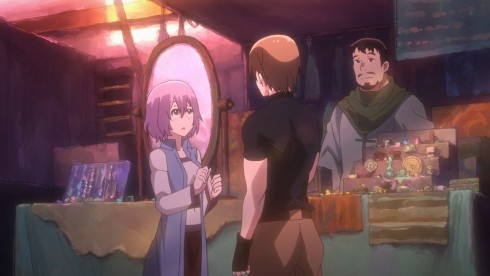 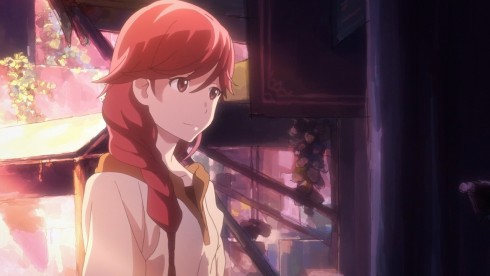 The aftermath was quite good as well. I liked seeing how everyone dealt with the realities of what had happened. Everyone needing this time to spend a bit of money and find their own way to have some peace or at least try to push away the memories of their actions. Not a shocking thing really. Everyone needed to just deal with the fact that they’d had to kill in order to keep themselves alive. Basically getting 18 coppers for each of them for killing a goblin. Certainly they can find a way to keep going. If there’s enough solo goblins out there they can get by day to day. But that’s probably not so easy.

Their problems aren’t immediately gone. If they can’t improve to be able to fight 2 to 3 goblins at a time they are really going to suffer. There’s no need really to reach the levels of the other group, but in order to just comfortably survive they do need to get stronger in a hurry. They are still in a very dangerous situation there. They have some money and know they can win fights, but they aren’t in the clear in any respect. 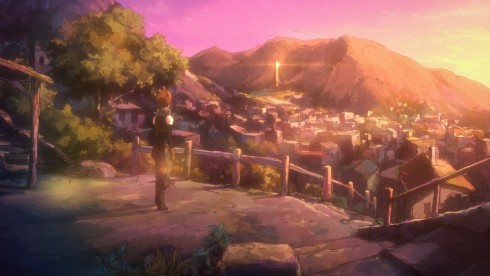 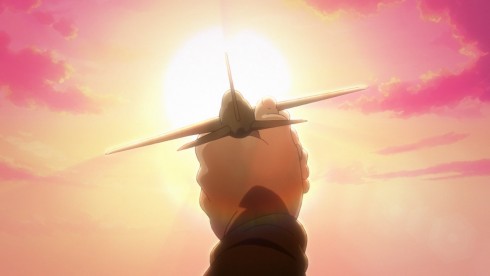 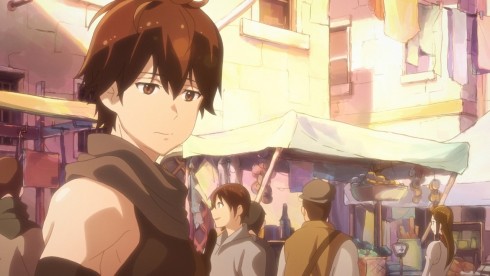 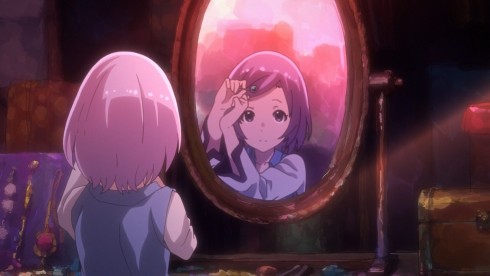 Again the rest of the day for the characters was interesting. You didn’t have any dialogue and really you probably didn’t need any. Just listening to the music, the song by the way was really darn good. You just see Haruhiro going around, walking, and taking in the city. Ranta of course went straight for the food XD. Though he hardly looked as excited about eating that meat as he might have been before fighting the goblin. Was nice to see Yume and Shihoru out shopping and having a bit of fun after all they’ve been through. Everyone just finding their own way to unwind and perhaps push away memories they’d rather not have.

A small thing that did stand out was Manato and Shihoru at the stalls. Is something going to come from that? I did think from the first episode that things were going to lean more towards Shihoru and Haruhiro, but I guess not. Though we’re a couple episodes in, who knows how things are going to turn out. At the very least it was interesting. I suppose companionship is a good way to comfort oneself and they are both classes that use magic and kind of hang back mostly.

On that front I’m kind of curious about Manato. Was he really gathering that much information? Maybe because we just met him, I just kind of wondered if he didn’t feel the need to just plain drink. The guy is the leader of this group on the brink and has a lot of responsibility. Maybe he was gathering some information, but maybe he just needed to drink away his troubles. The fact he didn’t tell anyone until he was spotted just makes me wonder. 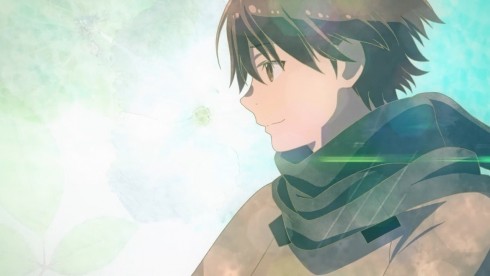 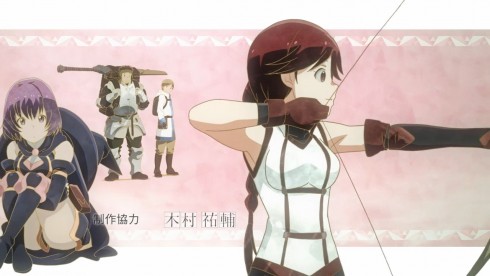 I think this was a really enjoyable OP. The song is pretty nice. It’s not super exciting, but the show in a sense isn’t either. It feels like a song that fits in with a show like this that is very rough. The visuals were pretty interesting. It does make it hard to make any huge guesses at things. You see various characters paired up at various times. Haruhiko and Ranta are on the same screen for a scene, then Haruhiro, Shihoru, and Yume. We do have Manato and Shihoru so that may be plausible, but we also have Ranta and Yume…I suppose anything is possible, but I could see her killing him before anything else. It’s a pretty solid OP. 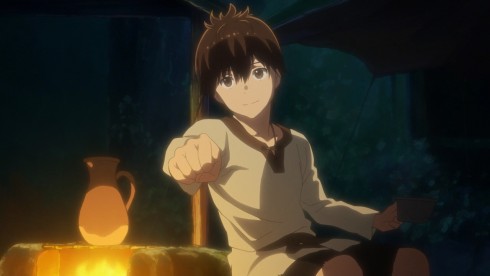 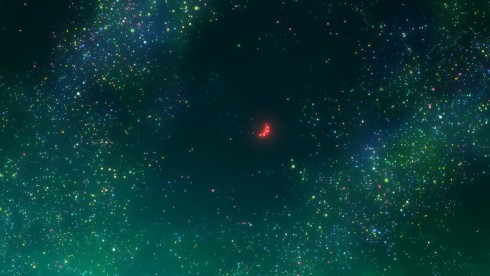 In the end I think we’re getting something quite good with this series. A very down to Earth fantasy series that doesn’t feel the need to completely throw away magical aspects. We still have healing spells, we still have offensive magic, and we still have a very fantastical world. But, we have a group that has made small progress but is still very weak. They have to be insanely cautious still. Haruhiro was a step away from death this week and that’s not something easy to get past. But they hardly have time to take it easy. They need to keep getting experience and improving their coordination so they can take on larger groups. Then they’ll have a chance to calmly survive out here.

Will decide before episode 3 whether I’m sticking with this show full time or not.