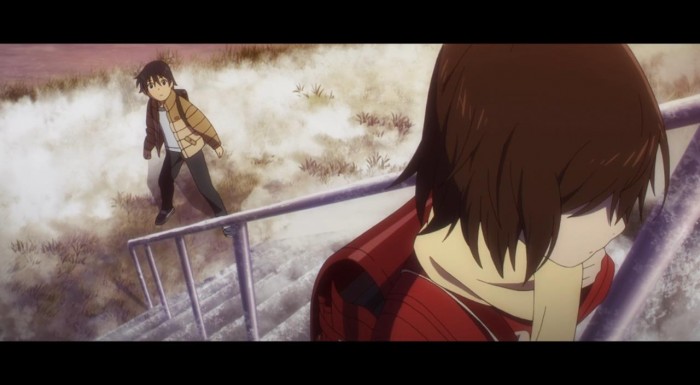 Boku Dake ga Inai Machi follows up that killer of a start with a nice, slow and reserved second episode. While not the same stunner as the first, the second episode actually reaffirms a belief of mine, namely that Boku Dake ga Inai Machi won’t just be good in the immediate, but that its also in it for the long game. Small, delicate developmental episodes like the one this week, are the building blocks of what generally turns out to be a great story, after all. 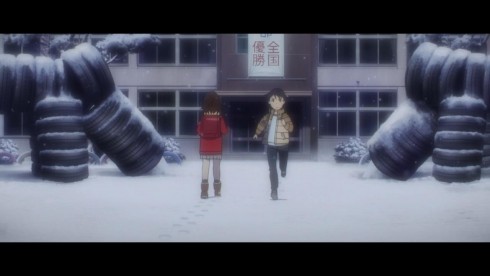 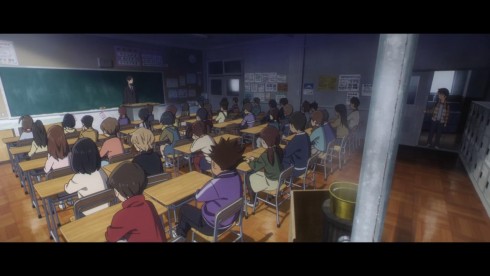 If last week was about setting up the stakes, selling the audience and establishing the premise, then this week was really about acquainting us with the characters and the world that we’ll be spending a decent chunk of time in. I’m still unsure about whether the show is actually going to commit to throwing away the future and those characters that we saw in the premiere, but the one thing that I do know is that the past is equally as interesting as the future we saw.

Satoru, for one thing, really works as a lead, especially with that dual “29 year old” in his “child body” thing that he has going on. More importantly, however, Boku Dake Ga Inai Machi just really makes good on that promise of indulging in the nostalgia of one’s own past. Satoru is back to when he’s a kid, and while he doesn’t remember everything, he DOES take a second and come to appreciate the many things he took for granted. 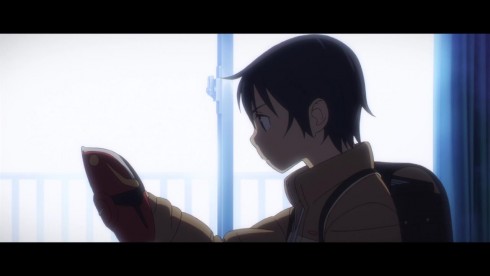 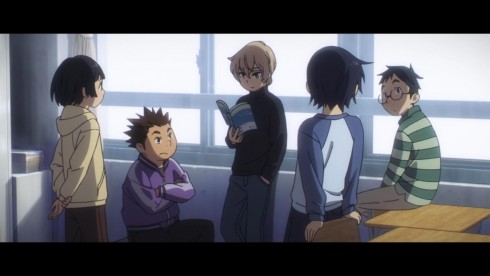 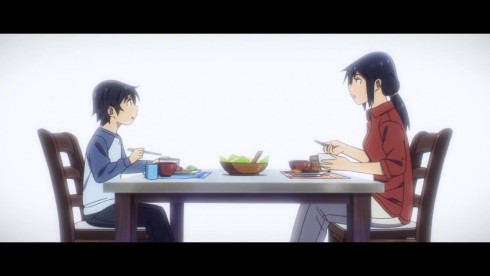 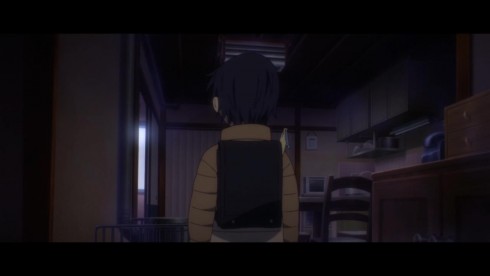 Its actually quite an interesting contrast, from the younger Satoru we see now, to the depressed, quiet and recluse 29 year old we saw an episode ago. Not surprisingly, Satoru’s relationship with his mother is further elaborated on this week, as it stands to be one of the emotional pillars of the show. Its also interesting to note, that Satoru’s mother actually raised him as a single parent, and that makes their whole situation all the more powerful, and the mother herself, all the more admirable.

More than anything though, I really like the difference that Satoru’s future knowledge brings to his younger self. At the age that he’s physically at, most kids aren’t exactly sure about what they want to do in life, and are all but floundering. Its just so fascinating to see a kid with a purpose, and really living each day as if its one of the most seminal and important moments in his life. 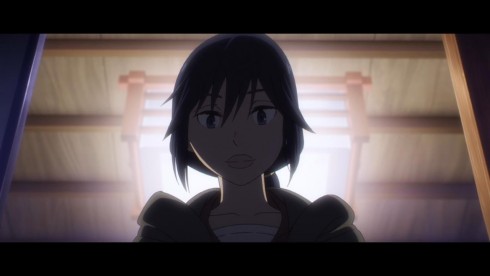 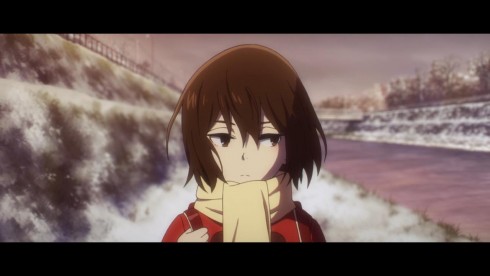 And it is, obviously, because he’s got two deaths to prevent, the one in the far future, and the one in the near future. Enter Kayo Mizuki, our seeming heroine of the past, and unfortunate victim. Kayo is an interesting character, with a situation and a story that rings of tragedy. She’s likely being abused by her mother, and seems to have no friends and no where to go. At 10 years old, she’s dealing with a situation that I wouldn’t wish upon any child, and she’s obviously been warped by her circumstances to a rather painful degree.

The real tragedy though, I think, is the very idea of her pain and agony going unnoticed in the past, the first time around. Since Satoru didn’t have his knowledge or intelligence at the time, he clearly didn’t notice what was going on with the girl, and she suffered and endured in solitude, ultimately dying at the hands of a killer and being buried alive in the snow. 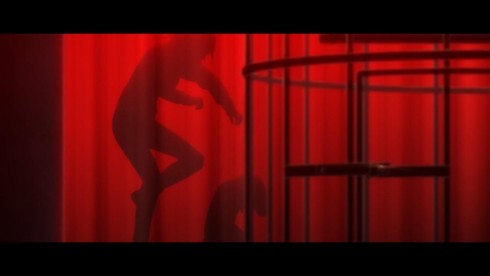 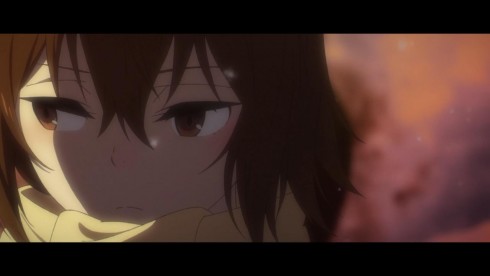 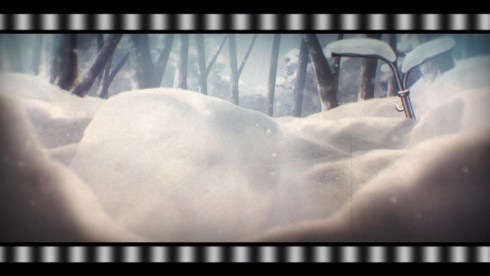 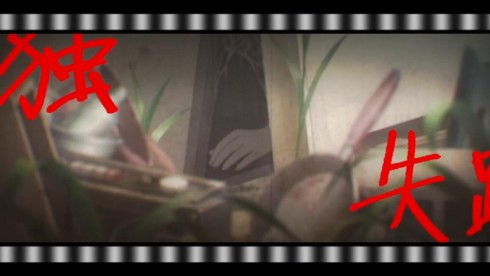 Its a painful end, but it speaks to a really dark side of whatever kind of area Satoru lived in, in how unfair and unforgiving that childhood time was for certain people. While its a great time for him, one he remembers fondly, its almost crushingly heartbreaking to see how different Kayo’s childhood and short life really was.

It really is the small things, the small little touches and planning like that, that have Boku Dake ga Inai Machi stand out as a seminal and well thought out story. There’s a pretty solid plan here, from the get go, and every move and every reveal seems carefully crafted and expertly calculated. 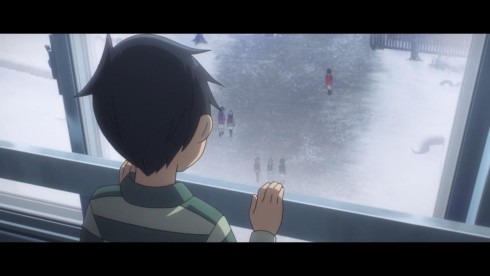 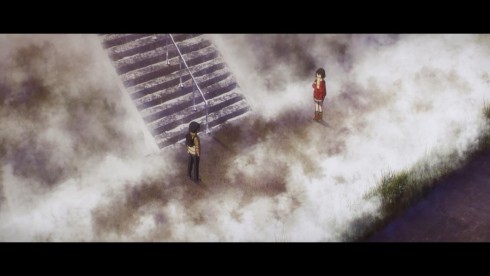 Most important of all, however, is the fact that the series isn’t afraid to take its time. This episode really just acomplishes two things, it settles us into Satoru’s past and the status quo that we’ll be in for a while, and it starts to introduce the bond between him and Kayo. There’s also a potential romantic element? XD

I found it kind of funny when Satoru smacked himself mentally, telling himself that he was 29 years old. Perhaps? But he’s got the body of a 10 year old, so I’m not exactly sure he’s the guilty party for feeling something for the girl in front of him. It was also interesting, to see Satoru reference parts of his “future” as if it were parts of some distant past life. Quoting the teenage girl Airi, even if just in his mind, is a pretty important moment. 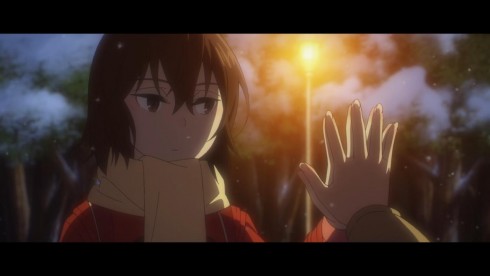 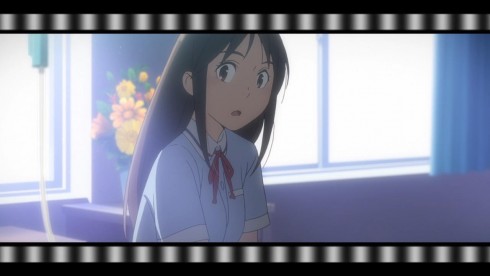 I’m unsure whether the tentative future is actually going to play a part in the past, or if we will end up jumping around through time, but I do know this, Airi is going to be a recurring presence in the story, and it does seem like she’s an important person to Satoru.

Interestingly, the whole past and future jumble is going to lead to a very interesting identity crisis for Satoru. Right now he very much identifies himself as the 29 year old from the future, but at what point will the lines to start to blur I wonder? And will Satoru start questioning what or who HE as a person is? Those are fascinating questions, and those are all questions that arise from the story and premise of the series thus far. I very much look forward to seeing what kind of answers it has planned. 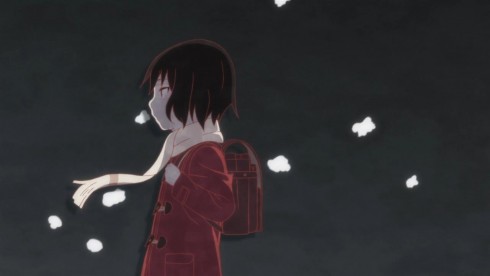 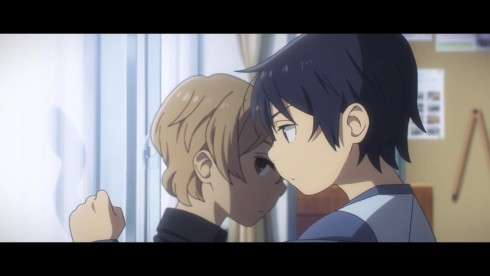 In closing, I guess I’ll go over some technical things, from a production/animation stand point. I realize that, too often, I seem to talk way more about the story and the characters, and while those two elements are pretty darn important, its the animation, the music, the voice acting and the little nods and tricks, that bring them to life afterall.

One thing I noticed, and quite liked actually, was the use of the cinematic, wide-screen aspect ratio for most of the episode. It gives the past a sort of dreamy, nostalgic feeling to it, which is obviously very intended. There’s only two moments when we get back to the normal, full screen aspect ratio, and that’s when Satoru’s either thinking or imaging a picture for the words behind Kayo’s rather telling essay. 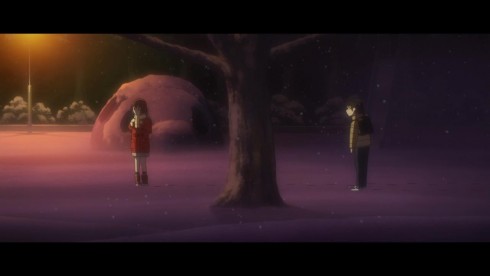 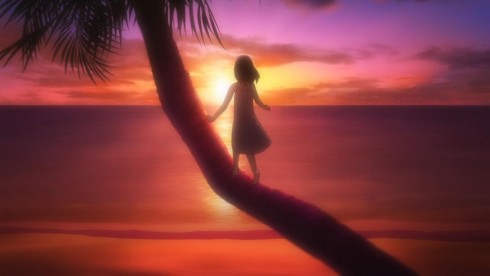 Either way, its a pretty clever visual device, and one that I rather like the show using. Its a lot more effective and powerful than using some kind of odd filter or color palette. Other than that, I’d say the show is a pretty solid and well done production for the most part. The sound work is excellent, the background music fitting, and generally everything’s pretty darn competent. I almost forget sometimes that this is being done by A-1 Pictures, because its just so well done in terms of production work.

The one thing I will note though, is that Satoru’s child voice acting felt a bit off at times. Its actually pretty darn rare for me to find fault with ANY Japanese voice acting, because its nearly always flawless or of such a high standard, regardless of what kind of show we’re watching but… Satoru’s child voice did feel like it was a being noticeably voiced by a woman a few times. 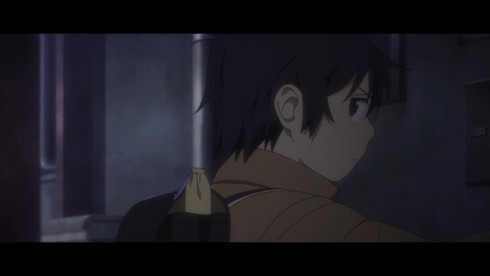 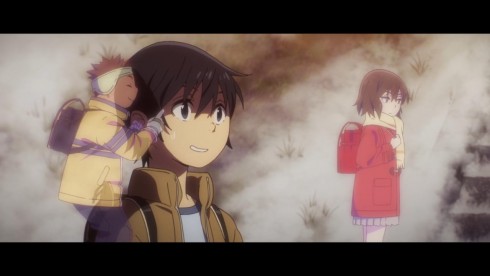 That’s nothing entirely new, as some of the younger and very prominent male characters are voiced by female Seiyu in Japan, but its never noticeable. The fact that I could generally HEAR a woman’s voice rather than a child’s voice, did throw me off a few times, especially when there was adult Satoru’s voice there to provide some context and an apt comparison.

Granted, it wasn’t noticeable beyond a few points here and there but… It is kind of a rare thing to see the voice acting generally not NAIL it in an Anime show. It didn’t ruin the experience for me or anything, and if nothing else, I expect Tao Tsuchiya to grow into the role and voice acting in general (it IS her first role ever… after all). 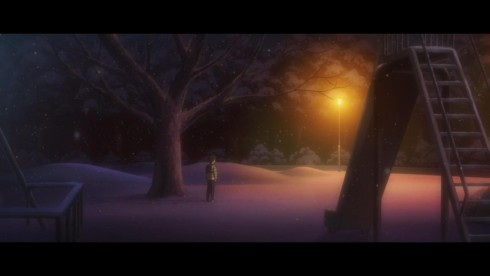 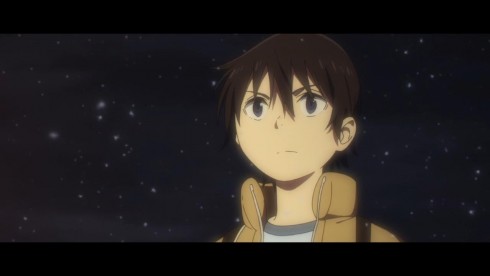 So in the end, I’d say that the second episode was a worthy followup to that great premiere. I’m liking the slow, careful and highly immersive experience that I’m getting from Boku Dake ga Inai Machi, and I’m curious to see where the show and story goes from here. I’m curious, but what I also like about this show is that I’m not starving or hungry for more, but I feel satiated and content with everything we got this week. That really is the mark of a great show IMO, one that leaves you both satisfied in the present, and excited for what’s coming in the future. 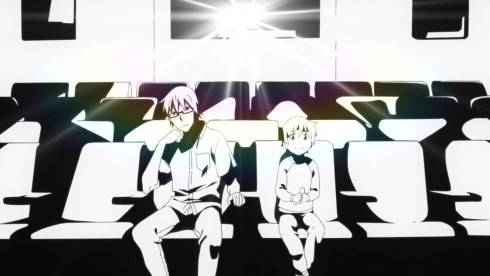 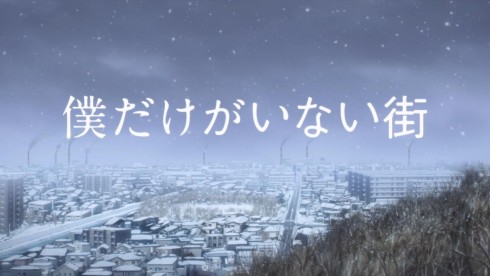 Now… I’m not sure if this song was ever used by another anime show, or if I’ve just listenned to Kung Fu Generation a lot in the past (I’m a huge JRock Fan afterall), but the song doesn’t quite have the impact it would have for me if it was entirely new to me. I actually quite like the song, but a lot of that has to do with the fact that I’ve heard it so many times. I’m not exactly sure if it entirely fits with the tone of the series, but its still a pretty good song. I also liked how the OP didn’t spoil any big surprises, so that’s another win for an anime OP IMO. 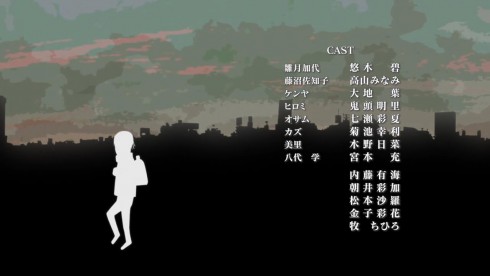 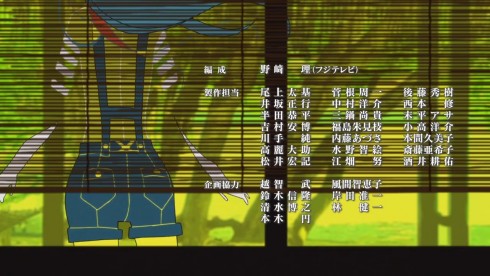 The ED on the other hand, entirely new to me, so I quite enjoyed what we got here. It also fits quite well tonally, so it was just a good time overall. Solid animation, doesn’t reveal much and falls in line with the cinematic, artsy feel that this show has. Its definitely a lot more mellow and lowkey than the high and upbeat OP for sure (at least until the last few moments).