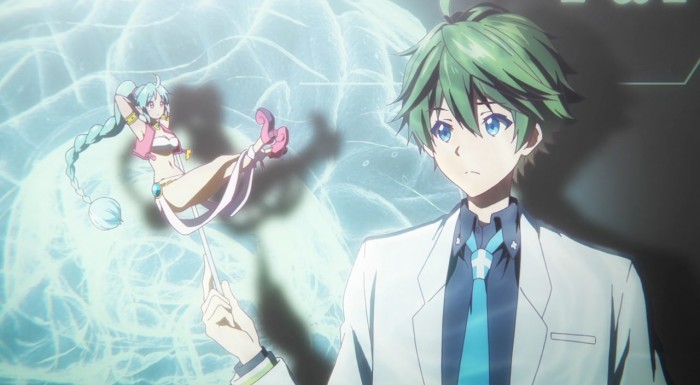 The story moves on this episode with two more phantom incidents for the cast to take on. Along with that came some more focus on Koito who will undoubtedly join their group eventually, but for the time being is very determined to be working on her own. I actually liked her ability quite a bit. The parole she used for her ability was surprising. It was quite the involved chant. Of course that shouldn’t have been too surprising with Haruhiko and Mai already showing how chants do help them control their abilities better. It might take a moment for Koito to get through that parole, but it works (most of the time). A voice specific ability that actually seems to have some variants to it. She also says it so confidently that you basically have to take her seriously. That large blast ability, but also the ability to use fire as well. Curious just how varied her techniques are, probably has a decent amount of options to deal with most situations she runs into.

Her attitude has some work to be done with it though. Someone who seemed to be a prodigy from a young age and for whatever reason is very bad at dealing with others. Blowing off the introductions from Reina and Haruhiko. She did put some credit where it was due in praising “most” of the group. Just kind of blowing off Haruhiko. Her actions at the end were kind of interesting. Was she going there to return the favor? Or was she hoping to see them competently handle the situation and feel like she wasn’t alone and there were other skilled people out there? Not sure, but it’s somewhat interesting. Hopefully she starts to open up a bit, being too cold can be just rude. 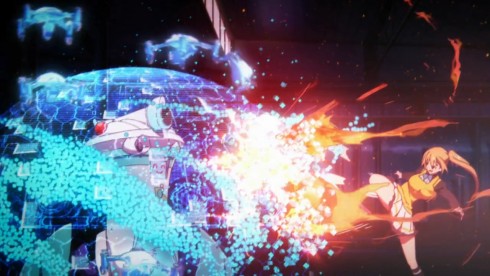 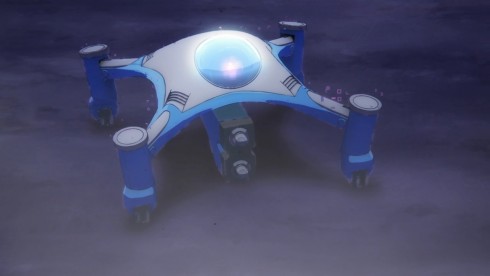 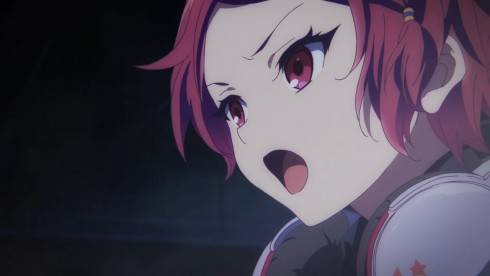 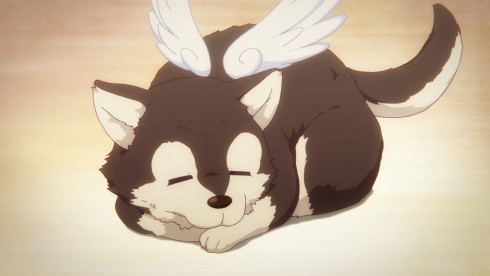 This episode did add to our understanding of how these abilities work and especially Haruhiko’s ability. The ability to seal and summon phantoms. Though it does seem like his creation ability has some bugs to work out. Trying to summon this large beat and instead…a cute puppy with wings. I mean sure it’s a comical little guy, but I’m sure Haruhiko isn’t too pleased with his failure. Very weird how the creature turned out completely different from what he was aiming for. We haven’t really seen any other abilities kind of bug out like his did there. Maybe there is a reason or it was just being played for comedic value. At least his tactical information and ability to direct people is still very useful when out there on the field.

The other important bit of information was about Paroles. Most abilities seem to need a kind of chant in order to be used effectively. Although Reina can just go Kirby on the phantoms without much else needing to be done on her side XD. It’s a kind of way to make the process easier for most ability users. Maybe it helps with focusing and directing their skills. Using linguistic frameworks in order to have their abilities do what they want. 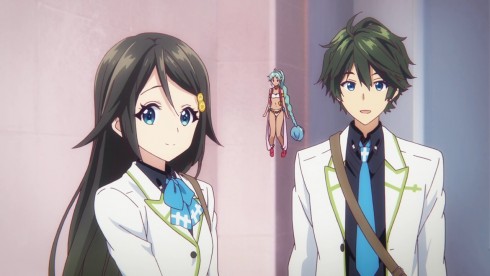 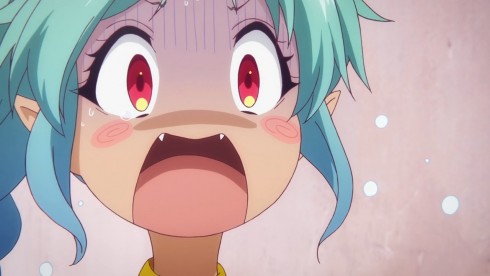 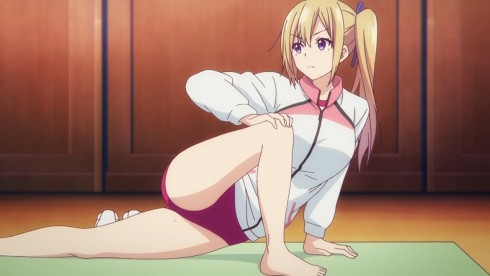 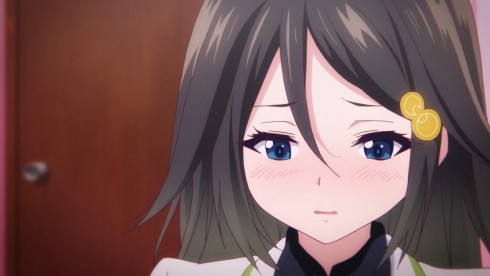 We got to see the new trio (plus Ruru) getting closer and interacting both with their jobs and outside of them. Yes, we did have the stretching scenes. I suppose while waiting for work to pop up it makes some sense to just pass the time as they please. It works for Mai since she is more physically active and will need to fight. Reina doesn’t really need to do anything so I suppose it makes sense for her just to be copying Mai and staying active. While Haruhiko has to work on his new phantom he was drawing so that was more important than stretches. Not that he is really the type for working out anyways. Even if he didn’t have to work on drawing the phantom he probably would have just been reading. And at least you can’t say they went overboard since while characters were talking they did pretty well stay on those characters. Mai’s stretching in the background was at times just out of focus so not to be the draw of the entire scene. Kind of impressed at the trust though that Mai and Reina were fine with heading to Haruhiko’s place to borrow the shower. Though I suppose Mai would agree since it saves her water costs (if her place even has its own shower).

I did find it nice how smoothly Reina and Haruhiko started getting along. No real crisis from their first meeting carried over. Just liked their meeting up at the school and being able to chat about Ruru without any over the top reactions or fanservice moments. It did also show the kind of weird friendship between Haruhiko and Ruru. I’m not sure if she is just messing around for the sake of having fun or if she does actually like Haruhiko. Ruru’s a character that’s hard to ever take too seriously.

Well…that’s one way to use a healing ability

Too bad the job kind of made a mess. I’m sure it won’t completely cost them their reward, but might have cost Reina her “all you can eat buffet.” I suppose for her that would be the dream reward for her services. It does make me wonder about her though. Her family doesn’t seem to provide her a lunch and forbids her to go to places like that. Are they ashamed of her ability and the effect it has on her appetite? Just bothered by the idea of a rich girl who eats like there is no tomorrow? Maybe that’s why she was sent to this school, they were worried about the social stigma of having Reina going to school with well-off individuals. Maybe it’s nothing, but honestly it’s her background I’m most curious to get into right now.

The job was really a mess to be sure. Reina seems to be an act before she thinks type on a lot of levels. Immediately throwing Haruhiko out of the room, but then apologizing as she realized she overreacted. Seeing him hurt and immediately taking action to try and help despite that involving quite the move on her part. Sucking on the wound and apparently as a side effect of her power being able to heal. Seems like all her powers are very inherent and she doesn’t have to think about them. While I can’t imagine having characters in this show getting seriously injured, having someone who can heal is never a bad thing. In the end I think it shows that she’s getting along just fine with Haruhiko. 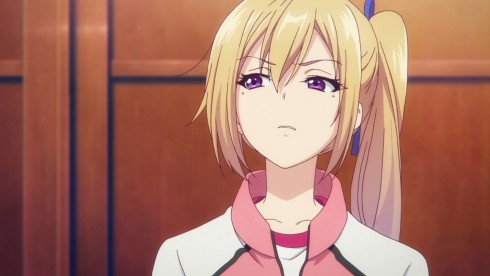 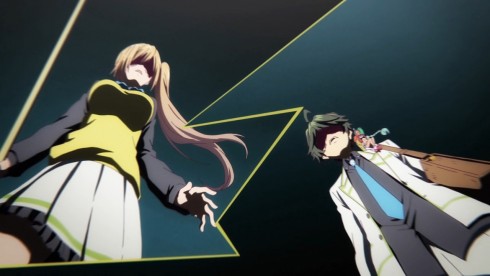 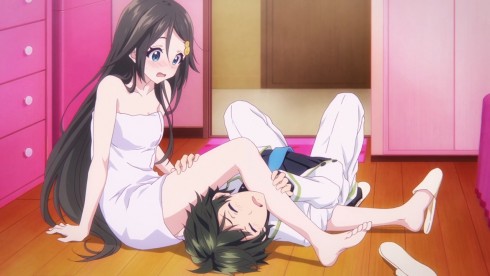 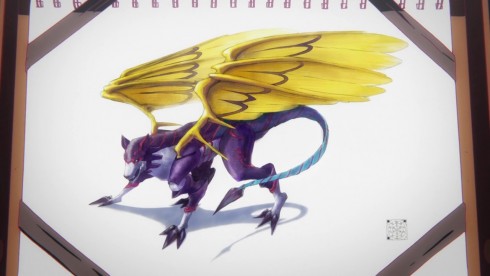 The second job was basically the definition of creative fanservice there. Making use of this UFO phantom who kept taking this pictures throughout the fights. Creating quite the interesting catalogue of images. Plus…Haruhiko is impressive to have stayed in the fight despite getting thrown out of the window several times. The guy may not be a big athlete, but he’s certainly built up his durability. In the end it was a pretty simple job, just really hard to pin down the UFO. In the end a team effort won the day, though I’m sure those girls were shocked when they got back. But to be fair they shouldn’t have been. If you are asking people to basically fight a phantom in your room….clear it out. Leave the area as open as possible so people can actually fight in there.

I’m curious about the device they picked up during the first job. Still no idea what it does or what it might trigger. Will certainly create some havoc though and maybe be the key of the crisis for the first arc of the show. I’m still curious to find out more about how and why Haruhiko and Mai teamed up in the first place and what kind of history they might have. In the end it was a solid enough second episode for the show. I’m still not sure whether I’m taking this one up full time. If it gets a third episode review then you can count on that and otherwise it just won’t.