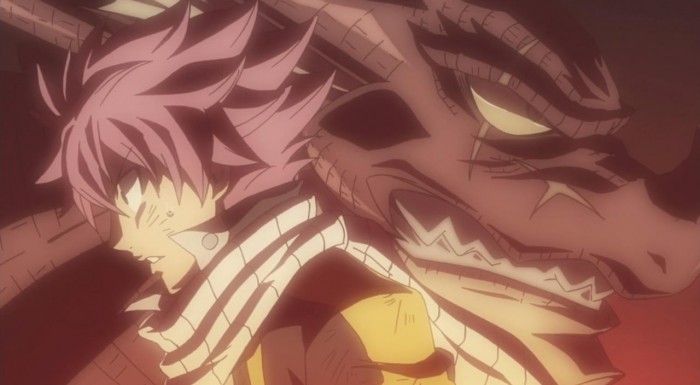 This week’s Fairy Tail episode was something that I felt like I should’ve liked a lot more than I did. On an intellectual level, I know that the stuff that happened in this episode was pretty great and well done, but I still can’t help feeling the way I felt about it all. And the way I felt about this week’s was really just an overwhelming sense of detachment, even as one of the series most fundamental and monumental moments came and went, right before my very eyes. 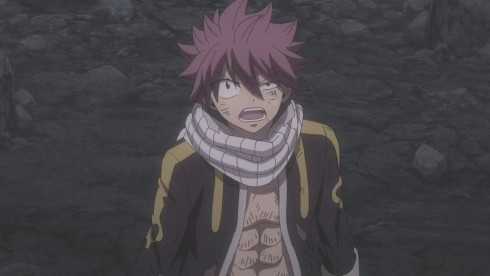 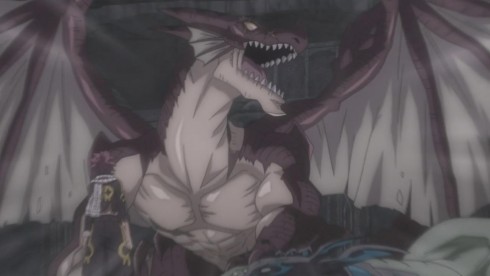 Going back to the first ever opening episode of the entire franchise, we’ve known that Natsu’s major driving force is his wish to see his father again. His father being a friggin Dragon that raised him, taught him Dragon Slayer magic, and then utterly and completely vanished one day. For Natsu, that created an overwhelming sense of loss, and a longing to be reunited with what I’d call a pretty unconventional parental figure.

More importantly, however, its always been a bit of a mystery as to why Natsu never quite detested his father for basically abandoning him. One reaction to being abandoned, after all, is resentment. And to that end, I think this episode tried and even succeeded a bit at explaining the unique relationship between Igneel and Natsu. 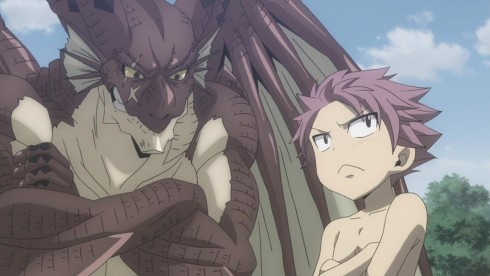 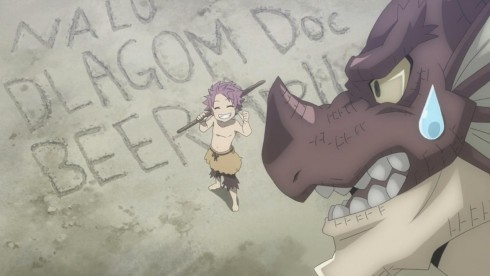 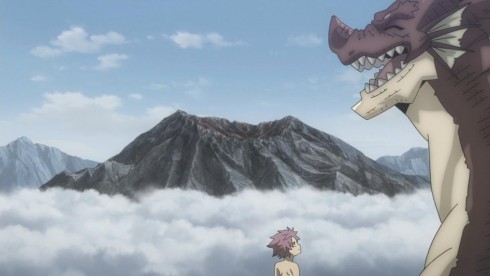 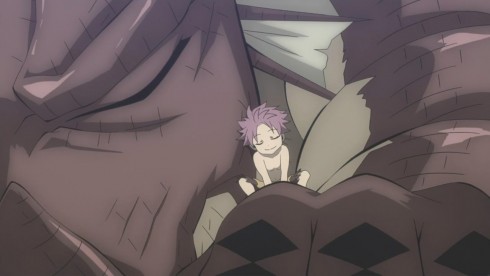 The flashback scenes we got, of a very young Natsu and Igneel, were definitely heart warming. They really showed the affection and the care that Igneel had for his human son, and just how much tender care and love there was. Yet, I think, part of the problem with those flashbacks was the simple fact that it pretty much telegraphed Igneel’s death.

Now, Igneel dying is a pretty big deal, and it should be this big, emotional, devastating moment. “Should be” is the key phrase, because for me, that sadly wasn’t the case. Igneel’s death ended up feeling kind of rushed for one thing, and entirely expected and predictable for another. The problem with this scene was that it came right after all that obviously false sense of security that the show had been generating before hand. That happy go lucky filler dialogue actually created too much of a relaxed tone, so much so that the shift felt jarring rather than surprising. 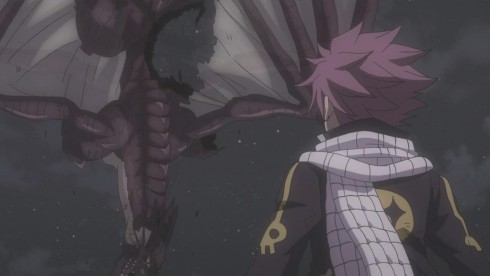 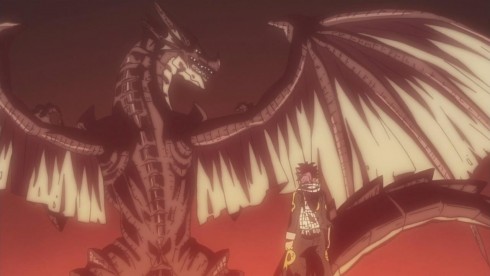 I mean, it should work, it should feel emotionally powerful. Igneel even mentions the two reasons for the Dragons residing inside their Dragon Slayers, and the reasons are quite noble. The fact that the Dragons did not want their own children to become full fledged Dragons, Dragons like Acnologia, was an interesting little tidbit of information.

It also makes me wonder about Dragons themselves. Why would the Dragons want to prevent their children from becoming the same species as them? Is becoming a Dragon some sort of disease? Igneel mentioning that the dragons were creating “antibodies” makes me really suspect that I might be on the right line of thinking there. In Fairy Tail’s mythos, it almost seems like becoming a Dragon isn’t a great thing. That’s almost kind of curious as far as Mashima-sensei’s approach to that particular subject matter goes. 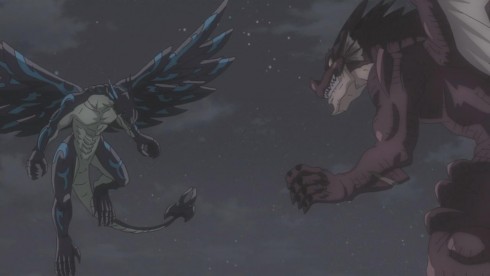 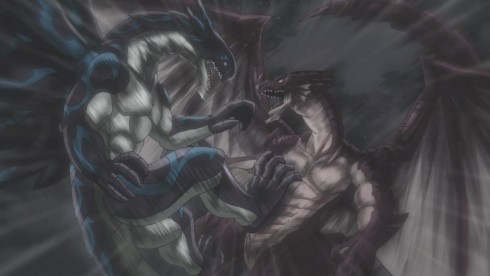 It seems like Dragons, especially Acnologia, are the most powerful of beings in the Fairy Tail universe, save for maybe Zeref. Now granted, Acnologia clearly seems to have gone mad from all the power he has, but still… It’s just odd to me that the whole idea of becoming a Dragon is looked at in such a negative way. I’m sure we’ll get a reason for this sooner or later, so I’m not too worried about it. I just wanted to highlight this particular fact because I found it interesting (so no hints or spoilers guys! XD).

Now, before I move on, I have to admit that the second reason this whole episode kind of lost the wind in its sails, was because of that damn preview from last week. The whole scene with Zeref calmly swooping in and taking the END book from Gray? That was all spoiled a week ago, in the episode preview no less. 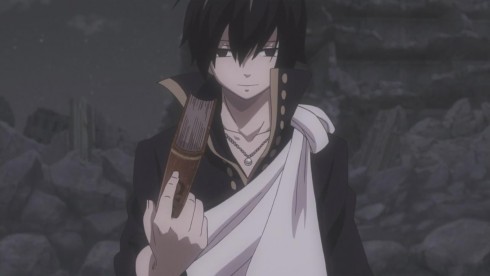 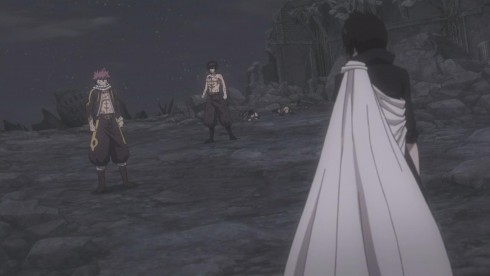 And while that sucked, I was kind of surprised by how quickly that whole moment was over. You’d think Zeref would actually just do some damage before he left. He clearly had his eyes on Natsu and Gray, and it almost felt like Zeref was going to let loose some earth shattering revelation, but it all just kind of ended without much fanfare.

Zeref came in, took END, Killed Mard Geer, and then left. Sure, there was the whole: “If you survive this situation with Acnologia, then I’ll give you further despair” stuff and even a rather important statement regarding Acnologia and the end of history, but it all kind of felt like a big let down. It almost felt like the whole Zeref thing was planned to happen right there and then, and then was just kind of brushed off, in favor of a future story line or arc. 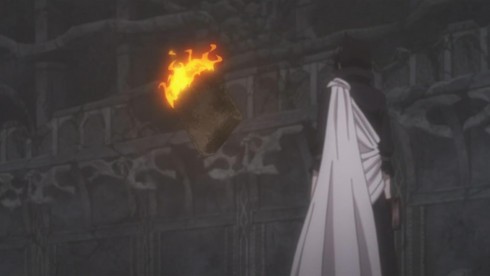 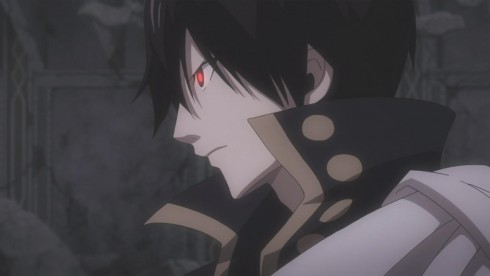 I really am curious about the whole idea of Acnologia and that dragon destroying “history again”. There’s a lot of hints in that statement, as it implies that Acnologia seems to have achieved his goal of total destruction at least one, in some kind of timeline. Does this play into whatever Future Rogue was trying to prevent? I’m not entirely sure, but I do know that that particular, off handed comment from Zeref, is going to be pretty important.

Now then… With all of that said and done, we’re at a rather interesting point in the story. Acnologia has had one his arms/claws torn off by Igneel, but Igneel has more or less been killed in the process. So Igneel is dead and there’s going to be a lot of fallout from that particular revelation, especially for Natsu. But Beyond all of that, there’s also the issue of Acnologia himself. 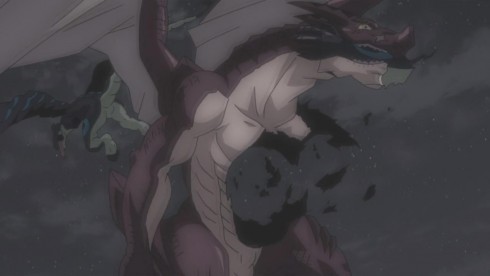 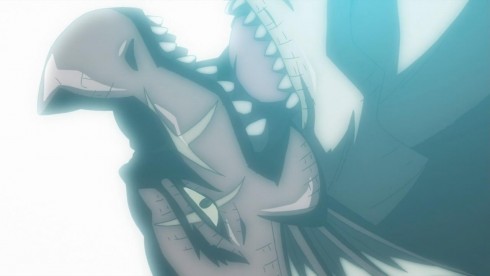 That Dragon is still around, and now… Fairy Tail has to deal with the same Dragon that almost ended them 7 years ago on Tenroujima. I suspect that this is where Lumen Historie will come into play, because I doubt that Acnologia is simply going to walk away as quietly as Zeref did this week. Thankfully, the preview doens’t really spoil anything major with regards to Acnologia, so it’ll be interesting to see how that particular plot point gets resolved.

Looking at this episode as a whole, I think that in a perfect situation, it probably would’ve felt a lot better than it actually did. The Tartaros Arc’s larger issues of bad pacing came into play and I think ruined a moment a bit, and the spoilerific preview from last week didn’t help matters either. I’m actually rather curious about how this particular moment played out for manga readers, and whether they actually felt a lot more emotion and power from this moment than I did. 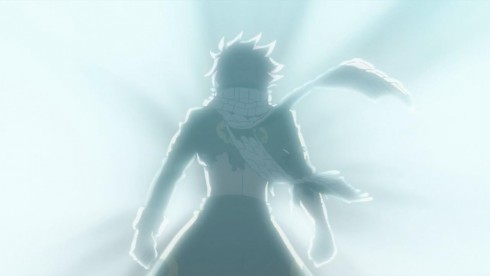 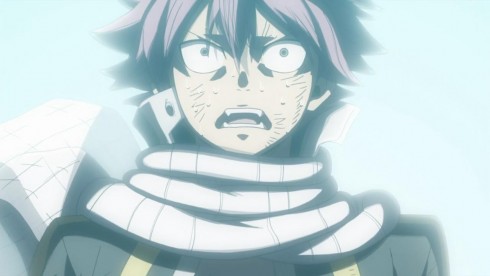 So.. Next week, we’ll be diving into the epilogue, which should get us nice and ready for Fairy Tail Zero in January (I’m sure Fairy Tail will take a week off for Golden week and what not), Overall though, I think the Tartaros Arc has been a fun ride. I’m excited to see how it all wraps up next week. 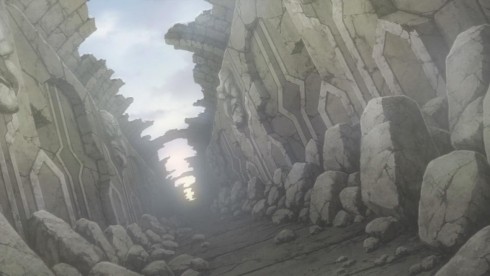 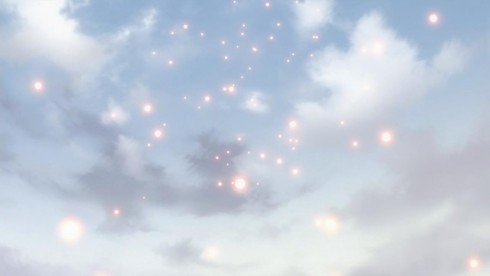 The wrap up for the Tartos Arc, the Epilogue. See you next week!