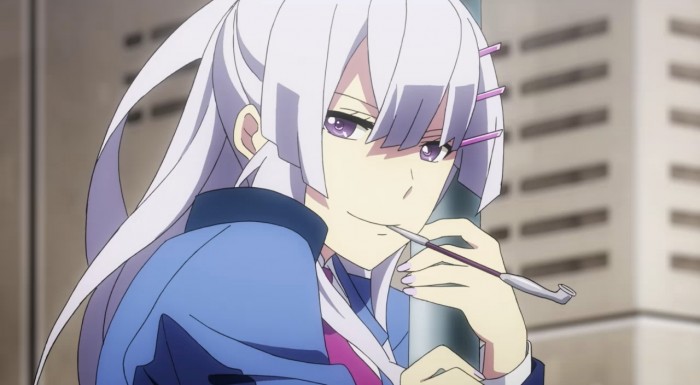 Well after a bit of a break, Heavy Object is back and ready to dive into a new conflict. Although to be fair this isn’t really a new conflict as a new stage for this conflict. It is very much tied into what happened in the previous episode with the attack that nearly killed Havia’s fiancé. Just that instead of the focus being on Frolaytia this time around. It’s a nice move since she hasn’t had that much attention given to her outside of messing with the main cast and being a pretty solid commander for those two.

Now we get to see that things aren’t all that easy when it comes to her personal life. It’s very much the reverse situation that Havia and his fiancé have. While those two are very much the Romeo and Juliet couple, things look much more…bleak with Frolaytia. They didn’t go into that much detail yet, but you can guess that it will be pretty well the opposite of Havia’s situation. Here having two people where there is no mutual interest, but pressure pushing them together. Of course that guy has no problem with the situation as you might expect, but Frolaytia doesn’t like the guy period. The guy being a pretty standard scumbag who wants to ‘tame’ Frolaytia. 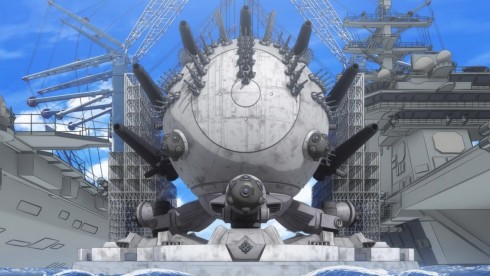 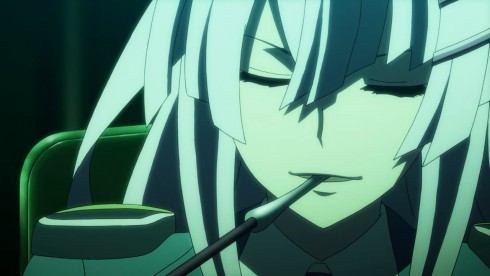 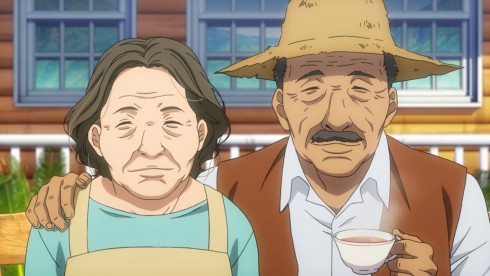 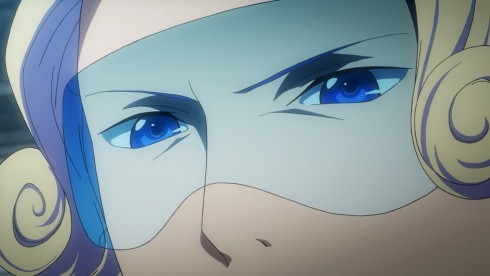 I didn’t think too much about Frolaytia’s background, but it’s not that surprising that she’s part of the nobility. Considering this kingdom you have to think to a degree that positions are not only based on ability but quite a bit about your status. Frolaytia is pretty good at keeping a poker face up, but even she couldn’t help slipping a bit in showing just how much she disliked being anywhere near that guy. No wonder that she wants to get this job done as soon as possible and not let that guy anywhere near this situation. It’s a pretty bad situation when Frolaytia looks utterly cornered. Certainly would create another situation with a lady in distress and the main duo being pushed to take down another Object as soon as possible.

It’s somewhat impressive just how ‘bleh’ the elite pilot of the Bright Hopper is. You just can’t find anything positive about the guy. He just oozes that kind of slimy character you have seen before in similar characters. Heck, this is also someone that the Princess wouldn’t care much for. With her being basically ordered to get curb stomped by that guy. Another downside to piloting the standard model. Having to be the fall guy in order to show off how awesome your brand new Object is. I think you can expect a major upset at that mock battle since that elite is basically being made out to be an antagonist for this situation. Would be nice to again show off to the world that you can’t just measure wins and losses on the generation of an Object. With a bit of help I have no doubt that Milinda can win. 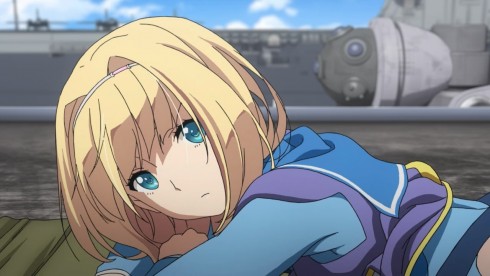 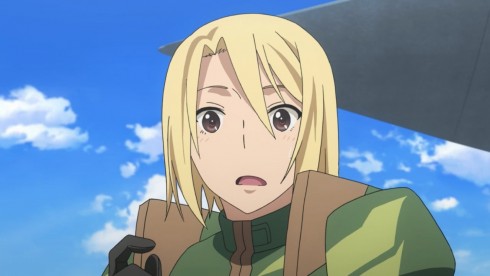 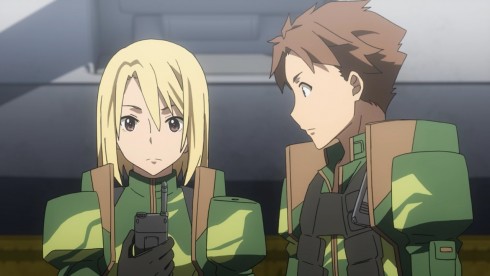 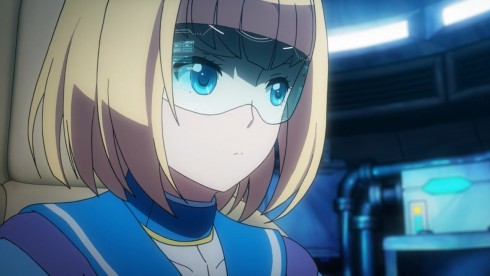 Once again the episode was chalk full of fanservice moments. Nothing too unusual there having a solid mix of comedy and fanservice once again. Though this time I’d say they didn’t have to completely go silly with it. After all the first part with Milinda was pretty believable. Mostly since I read it as her actively showing off to try and grab Qwenthur’s attention. He’s a fairly perverted person, but I can understand her figuring it is necessary to take a bit more dramatic steps to catch his attention. Though in reality what she really needs to do is actively confess. Of course it’s entirely possible she was just fooling around and relaxing out in the sunshine, but I’d rather give some real rational basis for her action. In the end I think it was a solid enough move for her to get some attention from the guy she is interested in. Might have gotten more than what she bargained for later in the episode though with the whole Bavarian Cream business XD.

Plus at least they do use that kind of fanservice moment to move the plot forward a bit. Explaining just why they are out there and about to get into this fight. Hate to say it, but my first thought when they talked about the tech battle was HD-DVD vs BluRay. Certainly the consequences when one technology is favored over another can be pretty dire for the loser. I’m not surprised that group did something so drastic. They lost out on their bid and all the money they spent developing that technology was going to be wasted. Especially since they weren’t even allowed to offer their technology to other factions that might decide that the Mass Driver model is worthwhile. They were basically left to either suffer financially or basically go to war. 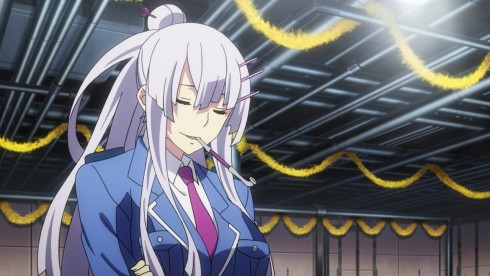 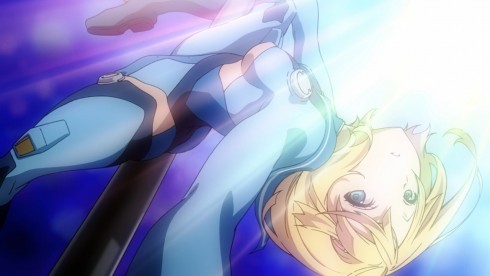 The other bit of fanservice…well yeah it was Frolaytia and pole dancing. Not much I can say about that XD. Havia just having a random thought and things getting carried away from that point. Though it did bring one of the bigger comedic moments for the episode I thought. Frolaytia having weakened the pipe with her dancing before-hand, so when Milinda went up to have her turn…she busted it XD. Dousing those guys in water that were having all kinds of fun watching XD.

They did squeeze a bit more background information, though really I think we just learned more about how pole dancing works XD. Maybe that part might be a miss for people, but I think the comedy in there was worth it. All the more so with Havia and Qwenthur going through the leftovers of a party looking for chicken due to Qwenthur’s pretty random craving for one. 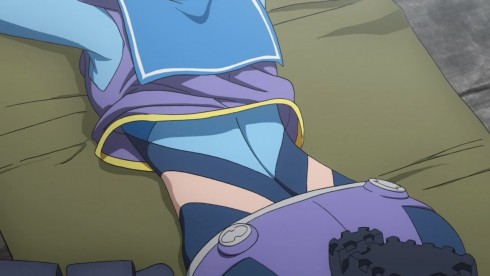 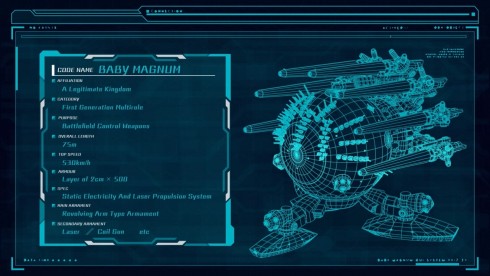 We still haven’t seen the stealth Object, but it’s bound to turn out sooner or later. There is a time crunch now to find that thing before the Bright Hopper arrives. Not giving that elite the satisfaction of messing with Frolaytia. Though I really just want to see Milinda crush his new gen Object. I’m sure the papers will have a great time with that kind of upset. Curious to see how Qwenthur and Havia both find this stealth Object and bring it down. This wasn’t a bad episode for getting back into things after not having an episode last week. Some laughs and setup for a kind of timed battle. Race against the clock to beat that Object and do so quickly.