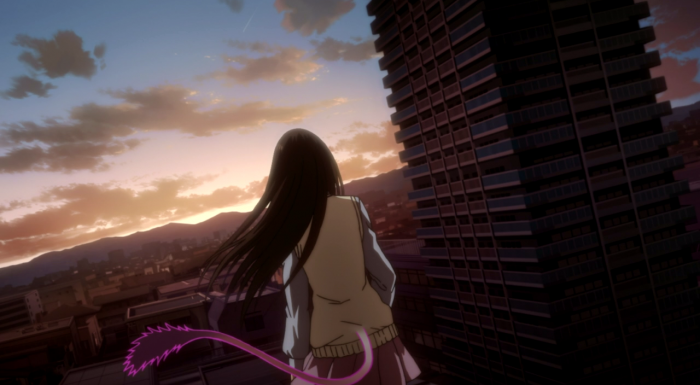 Aaaand we’re back! Last week was fraught with emotional turmoil for our heroes and filled with pineapple beers and basketball games for yours truly, but now it’s time to put all that behind us and focus on getting everyone’s favorite trio back together again. Massive thanks to Setsuken for covering for me last week! I was with you all in spirit (and Feels) if not in blog posts, and am now rested, rejuvenated, and ready to take us all through the final stretch of Noragami, however tense, amusing, or painful it may be. 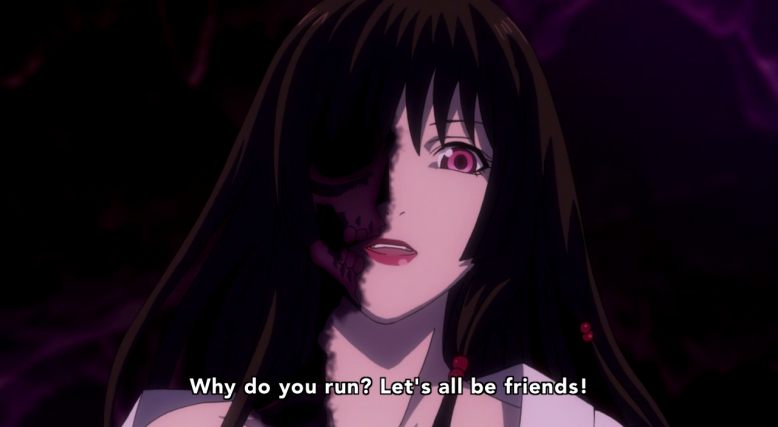 “GAWD, Mom, why d’you always gotta nag me whenever I have friends over?”

If you were wondering how Hiyori felt about that surprise kiss, wonder no more: She most definitely did not appreciate Fujisaki’s ill-timed advances. There was some talk in the comments section last week about how (in)appropriate his actions were here, and while I don’t think there was any malice in that kiss—he’s a teenager who saw someone he liked in tears, had no idea how to respond, and so did the Romance Movie Thing on impulse—it was a bad decision all the same, leaving Hiyori feeling violated and taken advantage of, and both are feeling the uncomfortable repercussions this week.

Fortunately for our hearts, we don’t have to watch Upset Hiyori for much longer, courtesy of Yukine, who runs into her and starts chatting as if everything’s normal. After an anxious moment where Hiyori can’t even see him (and briefly wonders if she didn’t just drop into Hatoful Boyfriend), everything comes flooding back to her. It’s intentionally anticlimactic, I think, playing on the idea of people getting so caught up in the mundane world that they “forget God” (if I had a nickel for every homily I’ve heard on that topic…), and how easy it is to remember again by simply taking a moment to focus on (and perhaps pray to) the world beyond one’s own.

Point being, Hiyori’s back, baby! And giving our little ball of hormones all kinds of awkward feelings. 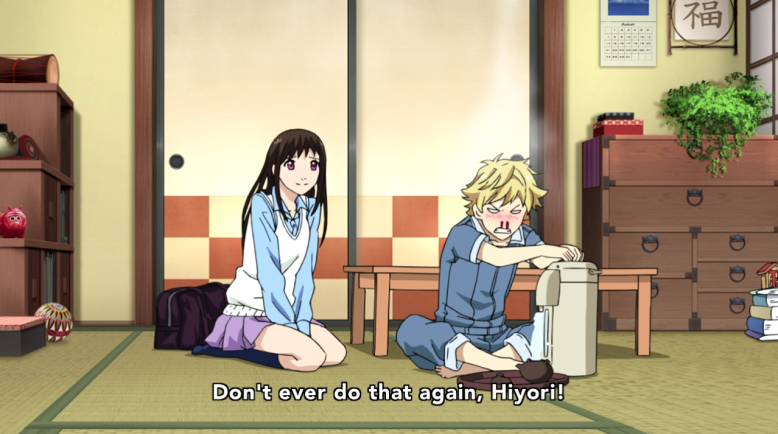 Being a teenager forever is a fresh kind of hell. I feel for the kid, I do.

Her return helps spark a renewed search for the missing Yato, but with no leads there’s nowhere to search for now. Hiyori blames herself for being arrogant and thinking she was “different” from other humans, and vows to learn more about Yato so she doesn’t lose and forget him again. More and more, Hiyori seems to be shifting into a priestess-type role in her relationship with Yato, and I’ll be curious (read: hopeful) to see if the series follows that path, helping her find a balance between her Near Shore life with her friends/family and her Far Shore relationship with the gods and Regalia she’s come to care about.

After some less-than-helpful library research, Hiyori goes to Mayu for advice, which drops her right into Kazuma’s investigation of the Takamagahara lock-down. The Heavens want Ebisu’s head on a pike, the Gods of Fortune are being held for questioning, Ebisu himself has vanished into the underworld… and a certain “young man” and “woman wearing a white crown” went after him. So! Who’s up for a summer vacation? 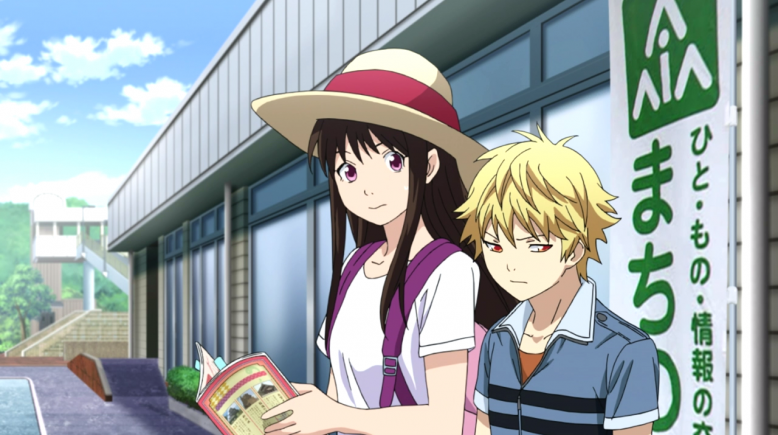 “I wanted to go to Cancun, but NOOOO, we had to visit the underworld ’cause it’s what YATO wanted to do…”

On the other side of the gateway, Yato and Ebisu continue to flee from Izanami and her Beldams with increasing difficulty. Even after Nora sacrifices two of Ebisu’s Regalia to save him, he refuses to give up, passionately telling Yato that he needs the Locution Brush in order to control Phantoms and protect humanity from them. “The world is filled with senselessness and futility,” he says, which is why “gods are needed,” and he intends to live up to that role.

Ebisu’s noble goals don’t come as too much of a surprise at this point, especially given how danged likable Noragami made him last week, but they’re vitally important for Yato, who compares Ebisu’s definition of “gods as protectors” to the violence he’s been wreaking as of late, and is disgusted with his own subservience to “father” (Iwami?) and Nora. In a mid-battle epiphany, Yato decides to become “someone people respect” by following his own path rather than the one others expect or ask of him. 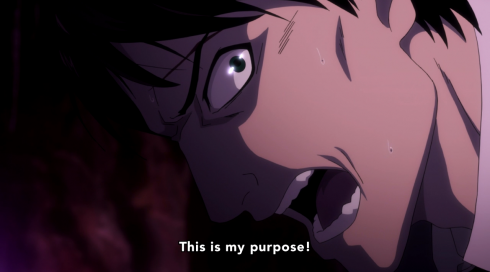 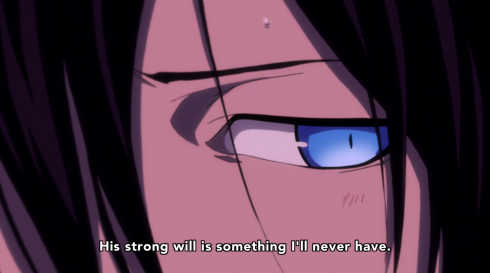 For starters, he’ll risk his life to give Ebisu and his remaining Regalia time to escape, a plan that would’ve worked if Izanami hadn’t sealed the exits. Knowing his blight is worsening and realizing their best bet is to give Izanami what she wants, Ebisu returns to the captured Yato to turn himself over, allowing Yato to escape and take the Locution Brush back to “Iwami” (father?). Ebisu can always just reincarnate again like he’s done countless times before, after all, and continue his mission from there.

If Ebisu earned Yato’s respect in the early going, then Yato earns Ebisu’s here, as he vehemently opposes this idea, urging Ebisu to think for a moment about what he, this version of himself, wants to do. While some of a god’s base personality does seem to carry over from one incarnation to the next, the complete loss of memory means that they do irreparably lose an important part of their “self” when they die. “Self” is as much about compiled experiences as it is about natural disposition, and Yato—a god who’s (probably) only ever existed in this current form, and who has no guarantee of reincarnation—is keenly aware of that.

Ebisu admits to at least one personal, “selfish” desire: Eating at the Olive Tavern again. And buddy, that’s all the wish-granting Yato god needs to hear! These two are a fascinating study in contrasts, and watching them inspire, challenge, and improve one another is hands-down the highlight of this episode. 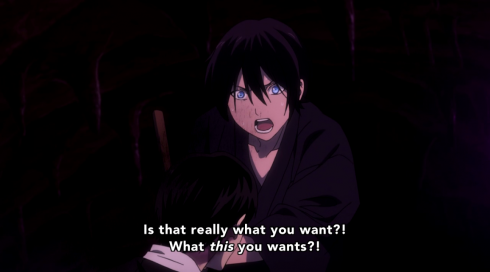 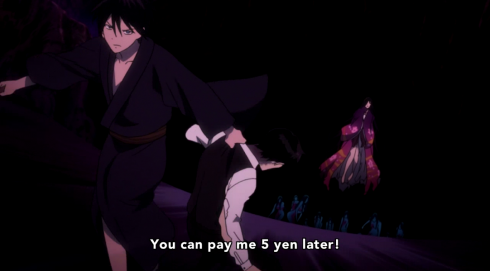 With his usual recklessness, Yato suggests creating a Vent to chuck them (and a mess of Phantoms) back to the mundane world. Ebisu’s gives it a whirl, and it looks like this crazy scheme might just work…until Izanami gets a hold of Yato and drags him back down to the underworld?! Oh noooo—

Actually, y’know what? I’m not that upset. In fact I’m kinda hype, ’cause this likely means Hiyori and Yukine are gonna get to have themselves a little rescue mission in the coming weeks! Those two have been needing a story where they could be the front-and-center heroes, so I’ll be very happy indeed if that’s what we’re about to get. Go Team Delivery God!