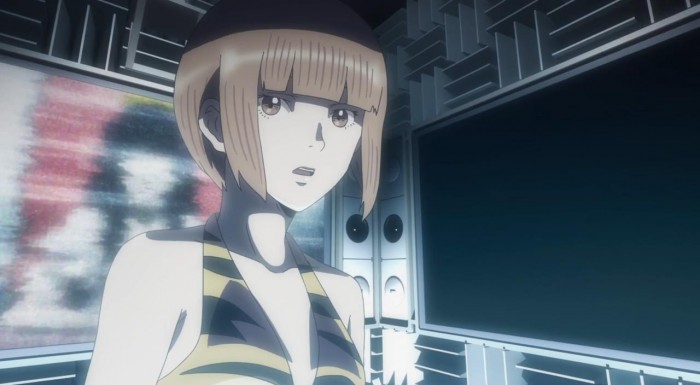 Well that was a bit of a let down… After weeks of Subete ga F ni Naru oscillating between tantalizing mystery and pretentious philosophical drivel, this week’s episode finally just laid it all out on the table. 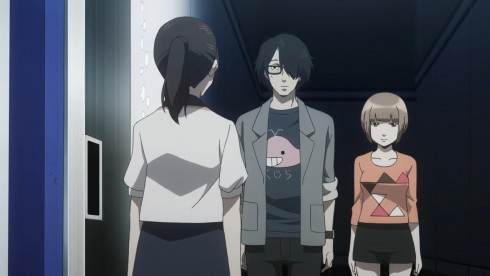 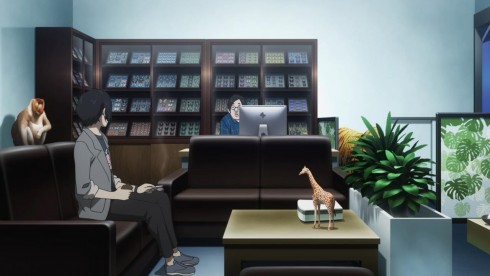 But… As is the case with most anime that try to be “deep and intellectual”, when the show actually reveals what its about, its actually pretty simplistic and even a bit idiotic. I think that’s a big reason why Anime like Ghost in the Shell, Serial Experiments Lain, Akira, FLCL e.t.c have never done it for me. Its because they TRY to act smarter than they are by needless stretching out a very simple idea, and layering that stretching with needless visual overload, dark themes and depressing atmosphere. 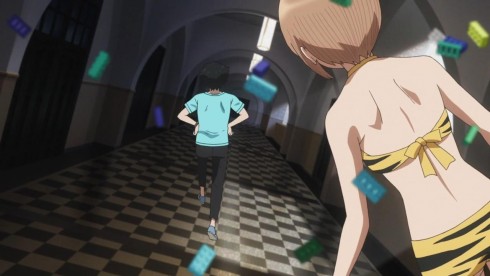 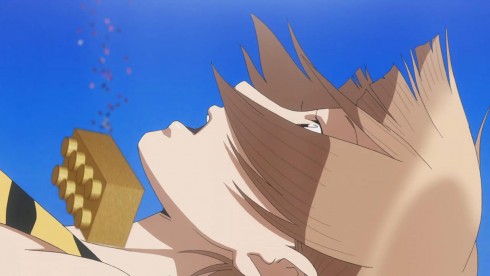 That was an unfortunate symptom in the late 80s and early 90s, and thankfully once the 2000s hit, that kind of show fell to the way side. There have been successful examples of shows actually taking that psychedelic, intellectual stuff and mixing it with more contemporary entertainment, Ergo Proxy I think being the most memorable example. But those kind of shows are outliers and anomalies much more so than tried and true convention.

So where does Subete Ga F ni Naru fall in within the spectrum? I’d say its closer to Ergo Proxy, but its got the same disappointments that come from the other series/movies I mentioned. The problem is simple, Subete ga F ni Naru takes itself too seriously. It takes itself so darn seriously that it falls flat on its face, losing the audience and making a pretty big fool of itself. 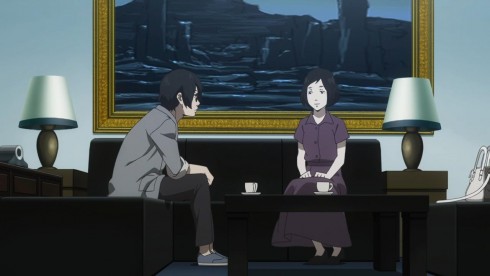 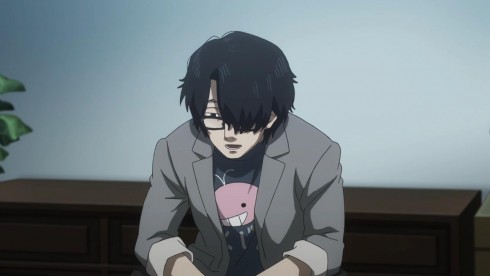 Case in point: That entire frigging conversation between Souhei and Miki. My God… I don’t think I’ve ever wanted a conversation to wrap up as badly as I did here. Some of it was most definitely due to a serious case of “lost in translation”. Simply put, having the dialogue in English was a very fatal mistake. Often, in the anime industry, shows get over the hump of other languages by just pretending that everyone in the world speaks Japanese.

Scenes like the one this week, with the awkward delivery, cliche dialogue and cringe worthy content, are the reason why that should pretending should never change. I’ve not, in a long time, dealt with voice acting and dialogue so bad in anime that its not only taken me out of the experience, but had me LAUGH at the damn thing. The delivery from the seiyuu was just completely and utterly flat, painful to hear (and watch). Its clear that voice actors are at a clear loss here, very much reading their lines, and failing miserably at any kind of “acting” whatsoever. 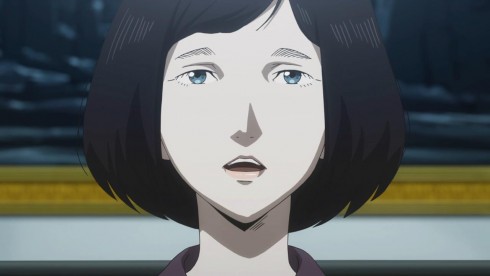 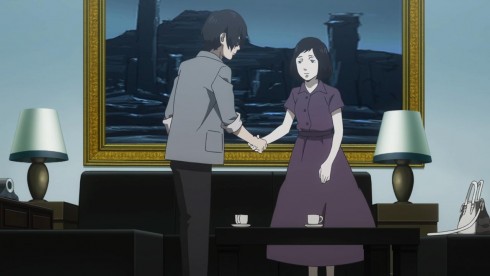 There’s no emotion, no tone, nothing in this conversation. To make matters worse, the actual dialogue itself is just as terribly written. Its as if the writers of the show were so enamored with the very IDEA of having a lengthy conversation happen entirely in English, that they forgot to focus on the fact that something noteworthy had to happen in this conversation.

We learn absolutely nothing new here, and the only thing we do get is a vague idea of how distant Miki was from her sister, and how “cultured” the two of them (Miki and Souhei) seem because they can hold a conversation in another language… The show is just so self absorbed in itself that it misses the fact that its gone long past “weak” and squarely into terrible. 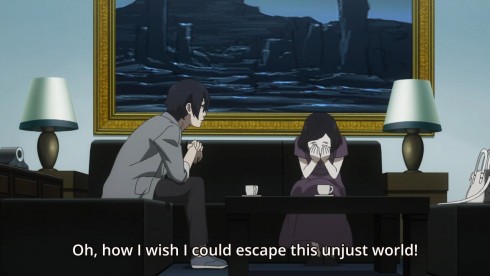 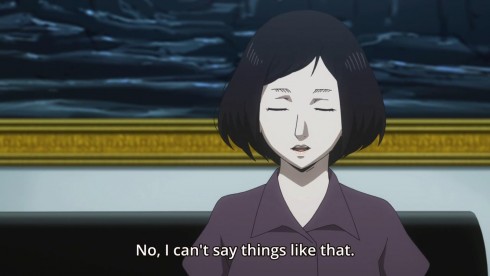 Yes, I realize that English isn’t a first language there, but My God… If you’re bad at something, avoid it. Its one thing to try and throw in a line or two for authenticity’s sake, and its often even kind of funny to see, but this was just… Argh.

So beyond that odd and utterly throwaway conversation what was the rest of the episode about? Well… About what you’d expect from  “a show like this”. Those quotation marks are there for a reason, because… Disappointingly, Subete ga F ni Naru is going the very cliche and utterly predictable route. 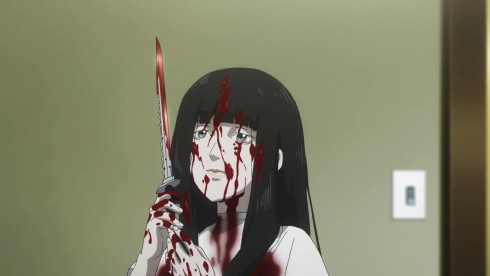 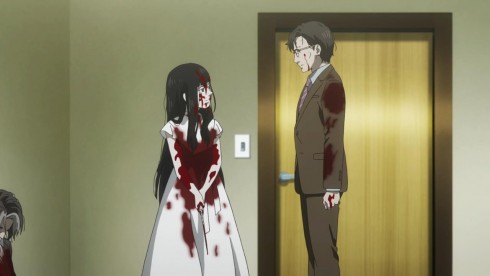 Its all in the so called “answers” to the big mysteries… Either Magata Shiki was killed, or she killed herself, regardless, she’s living in cyber space as a being that “has” surpassed the limits of the human body. Stop me if you’ve heard that one before, because that is EXACTLY what Ghost in  the Shell covered so thoroughly so many years ago. Shiki killed her parents, let her uncle get away with it, and then prepared to die and leave the earthly plane 15 years later. That’s really kind of dull and anti-climactic in terms of a full reveal.

There’s even a little moment of realization for Moe thrown into this episode, as she remembers what happened when her parents died, and how Souhei was there to both protect her and care for her. The person “next to her”, the one that haunts her dreams that she can’t remember? THAT was the Sensei that she’s in love with? And She finds all of this out through a virtual reality machine while meeting with the now dead Dr.Magata in cyber corpreal form? Really? REALLY Subete ga F ni Naru? 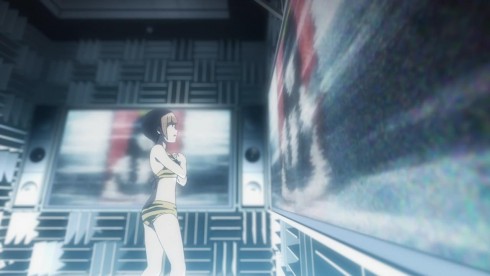 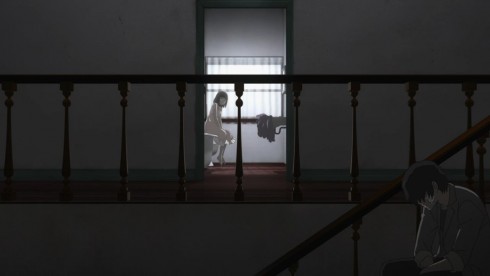 All of that is so trite, so darn simplistic and obvious, that its almost insulting. Its insulting because the show thinks that its actually doing something really clever or smart, and thinks its audience is moronic and stupid.

The idea of the Human soul being trapped by body, that cyber space might be a freeing new realm of existence isn’t something novel, ground breaking or even remotely interesting. Its been done to death, in a variety of media. Some places better, some worse, but the point is there is nothing novel about this show. 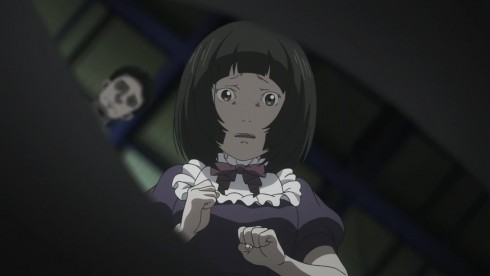 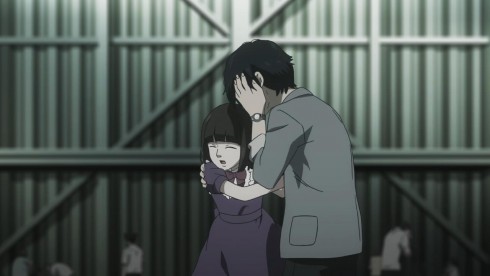 I had incorrectly assumed that the show was going for the dual goal of an entertaining mystery and an intellectual challenge, but honestly, the show just fell off on both. The answer is that Magata Shiki is in the Computer (or cyber space), and either died willingly or planned it so that she would end up dying that way. I guess I’m quite a bit disappointed, because I thought that the show would either have an interesting answer at the end of the tunnel, or at least, have a fun mystery to unravel.

Neither of those things are really true now. Subete ga F ni Naru is a generic science fiction, cyberpunk story, rehashing old concepts, and more in love with the past of science fiction anime and itself than it should be. 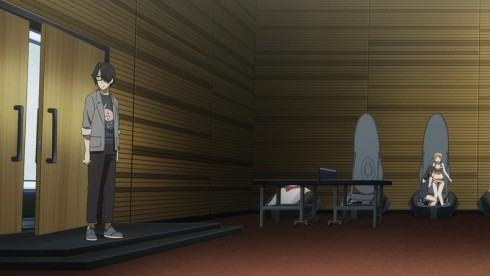 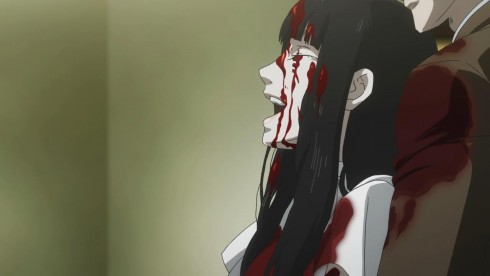 Am I jumping the gun a bit? Perhaps, But I feel like I have a pretty good handle on what Subete ga F ni Naru is trying to do, and I don’t quite like what I’m seeing. Is there some curve ball? Is it all misdirection? I sure as hell hope so… Because otherwise these past 7 episodes will feel like a gigantic waste of time.