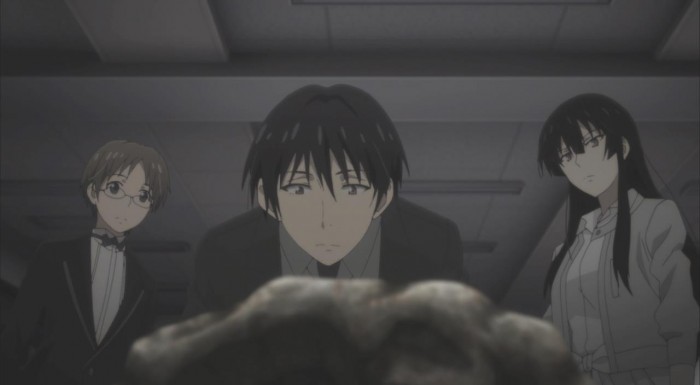 Sometimes a setup episode is only that, an episode largely dedicated to setup. I think its interesting that, whenever Sakurako-san seems to focus on its central plot or overall story, things in the moment seem to get muddled in service of that larger story. In sharp contrast to last week’s mostly self-contained, stand alone story, this week’s episode very much felt like the prologue to what you’d hope is a much more interesting story. 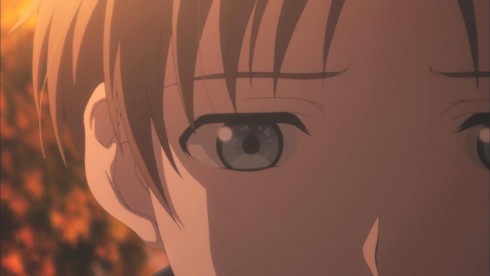 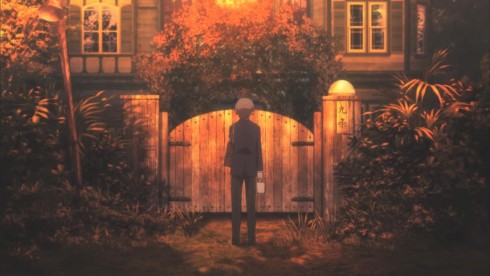 Its almost fitting that an episode like the one we got this week came on the heel’s of last week’s stellar stand alone episode, because the show has accumulated enough goodwill for the audience to largely dismiss the failings of this one. To be perfectly and frankly honest… This week’s episode, taken by itself, was pretty useless and almost boring.

Nothing of real importance happened. Shoutarou ended up mentioning his school cultural festival to Sakurako, and she actually ended up going to in place of his mother. There are times, times when I think Sakurako’s feelings for Shoutarou are mostly paternal, like that of an elder sister. There are other times though, where there’s clear romantic tension between the two of them. 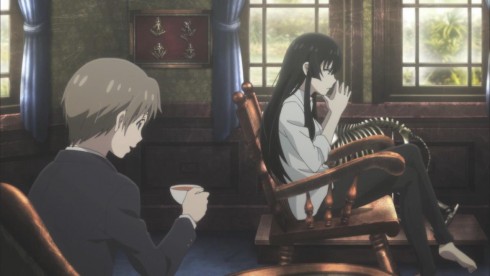 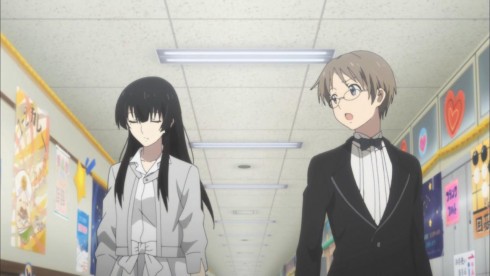 More so than anything though, I think what this week did highlight in the few moments we got between our lead duo, is that the two don’t know each other quite as well as we had perhaps, been led to believe. Shoutarou, for all his respect and adoration for Sakurako, felt the gap between them widen this week.

Sakurako is a scientist at heart, and with that, is a certain amount of detachment that just naturally happens. Its interesting that its Sakurako’s detachment from her cat’s death, and the almost altar like decoration of its bones, that drives Shoutarou up the wall.Its interesting, because, at least in my mind, that feels pretty natural, and about what you’d expect from her. Yet, for Shoutarou, that’s not quite okay, and he’s almost horrified by how scientific and detached Sakurako is about the whole thing. 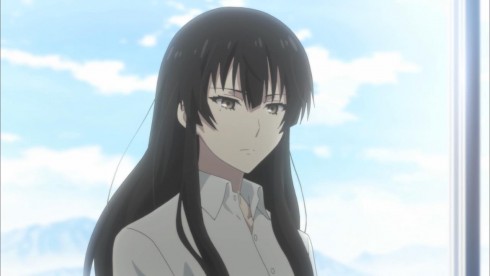 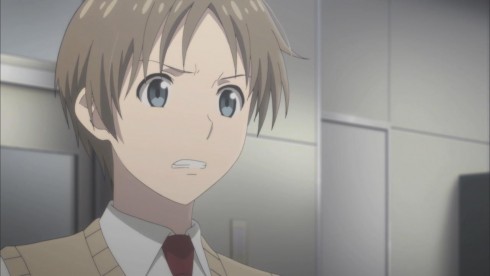 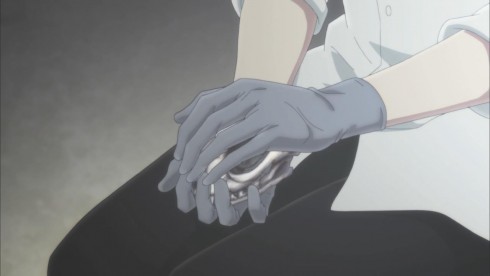 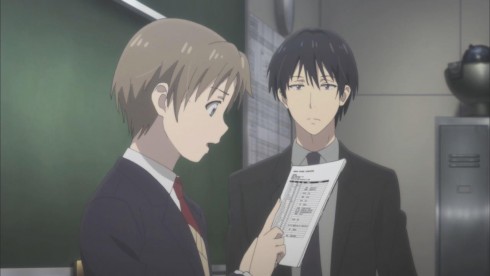 Then of course, there’s the big misdirection that episode opens up with. I’m not sure why Shoutarou is so freaked out by the idea that Sakurako may have “taken” a certain cat skeleton. She’s displayed tendencies to do stuff like that before… And its not like its from a position of malice?

I think there’s an element of irony to this whole scene too, if only because we as an audience have been given enough clues to assume that Sakurako isn’t as detached as she may seem, and is actually quite sentimental. I mean, there’s an argument to be made that the reason she continues to hang out with Shoutarou is because of her sentimentality more than anything else. Its actually become quite obvious that from an intellectual perspective, Shoutarou doesn’t offer much.

He’s not someone who shares her love for bones afterall, nor does he have any other kind of common interest with her. Just why do these two, seemingly opposite people stay together? What connects the two of them? I suppose the only way to really know that is to see how the two even meet, and that’s not something that we’ve been quite shown… yet. 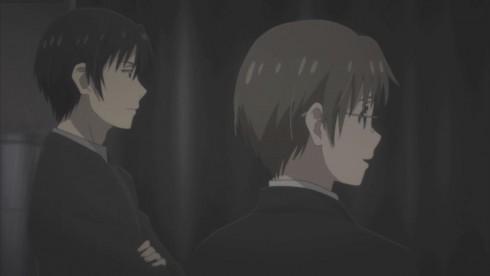 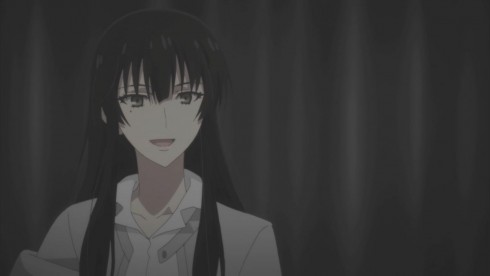 It is curious though. The most intriguing aspect of the series is the idea of what Sakurako and Shoutarou’s relationship is, how it was established, and more importantly, where its going. It seems like most of the cast, is squarely in the “will they” rather than the “won’t they” camp. Its also quite interesting that we have yet to see Sakurako’s fiance too.

I’m not sure what role he plays in their dynamic, but I’d assume that the Sakurako could very will split away from him if she wanted. As Isozaki-sensei points out this week, the fiance’ doesn’t entirely matter, and he’s almost egging Shoutarou on, telling him to not let that deter him. 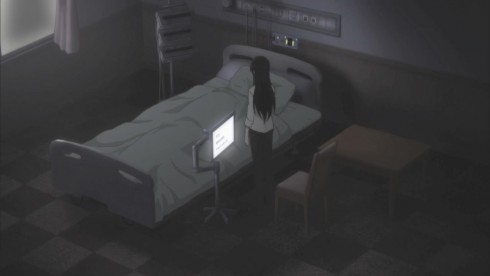 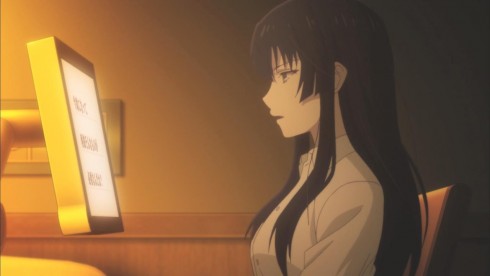 But again, things aren’t that simple. The series has shown us time and time again about how close our main duo is, how much they trust one another, and almost act like a married couple at times. This week was all about showing us how distant the two really are, and how much Sakurako’s quest for whatever it is she’s trying to find seperates her from the young man she continues to spend time with.

The scene with Sakurako and the so called uncle, Masamichi-san, in the hospital is particularly odd, and fairly telling at the same time. It seems like despite whatever measure of happiness Sakurako continues to get from her interactions with Shoutarou and all the friends she’s made, there’s a darker, more sinister thing that she’s dealing with. The scene in question, hints not only at some kind unsolved case, but also at the fact that this Masamichi-san has some kind of disease. I’m not sure if its ALS (the same disease that Stephen Hawking has), but it is darn sure that the good professor is seriously ill, and communicates via a PC monitor and text instead of actually conversing with his niece. 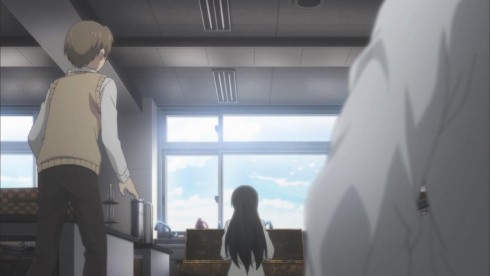 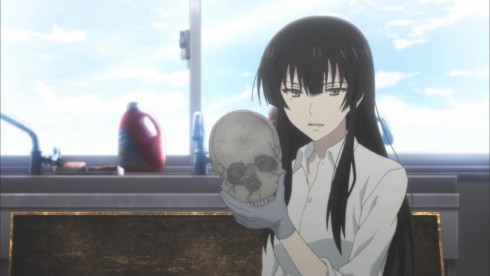 In any case, there is some kind of mystery that Sakurako is investigating. There’s also the fact of the human bones that were discovered by Shoutarou, Isozaki and Sakurako at the school, and how they tie in to the old teacher and his dead sister. Its unclear whether the two cases are related, or if they converge somehow, but both of these elements are on the table now.

What I think, makes this a weaker episode is the fact that everything just feels so… disjointed. Yes, there are mysteries brewing the background, but those seem oddly displaced from the character moments of the episode itself. It feels like some connecting piece is missing, and it may very well be, since I’m sure the adaption had to take some liberties with the source material. 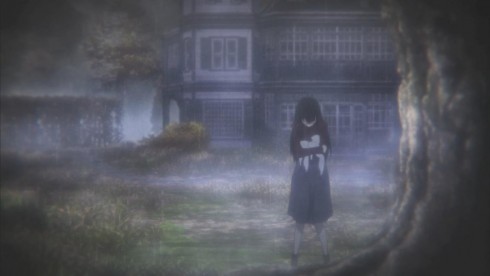 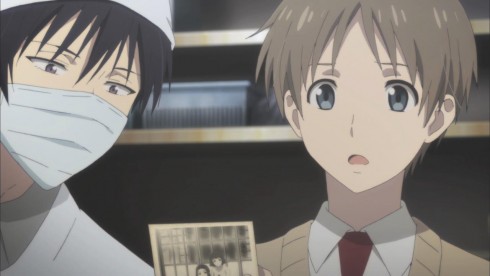 Liberties are fine, setup is fine, but generally this show does a better job of making it all fun and interesting to watch. This week didn’t feel that way, it felt like it really wasn’t going anywhere fast. Taken on its own, Its definitely not a great episode, but I say that the series has won enough goodwill from me to let it all slide one time. Hopefully whatever’s being cooked up for next week is worth the benefit of the doubt.