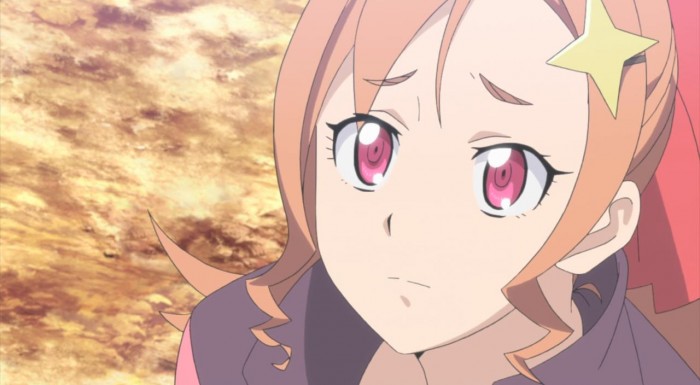 Well… That was certainly a tough pill to swallow. There are times when I’ve got a pretty strong feeling about how something is going to shake down and… Then it turns out to be true. Even though I prepared myself for it, it still hurt pretty darn bad when Comet Lucifer cut right through one of its primary characters, leaving their hopes and dreams crushed and moving forward into the status quo that it actually wanted to establish. 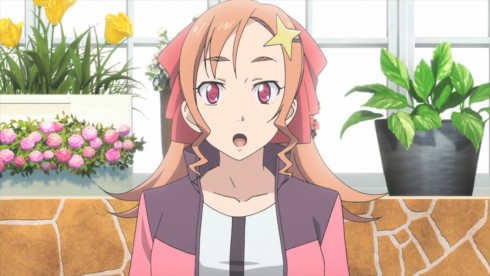 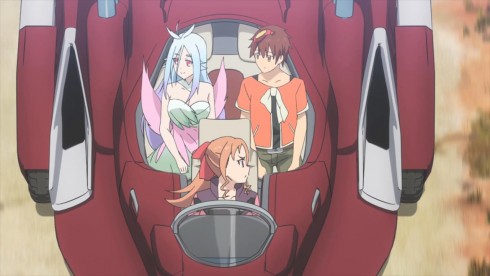 I’m talking, of course, about Kaon. Last week I began dreading the big love triangle story that was coming, the one that would put Felia, Sogo and Kaon in awkward territory, but even I wasn’t prepared for how horribly one-sided the hurt would be in this whole affair. Simply put Kaon got the brunt of the pain and disappointment from the resolution of the love triangle, so much so that it tore my own heart in two.

The big decision this week was for Sogo, Kaon and Felia to go off in search of the “Altar of Abyss”, a place that can very well restore Felia powers and stop her aging process. Roman is obviously opposed to the whole thing, so Sogo and Kaon promptly leave them behind, tied up and immobile. Stealing Roman’s car (Air Rider), the trio heads off with Moura to the Altar. 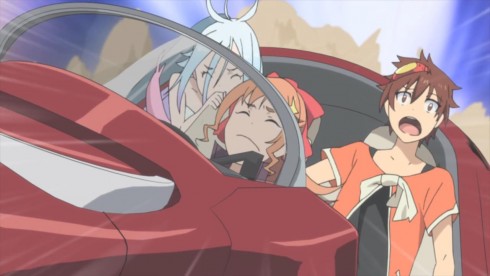 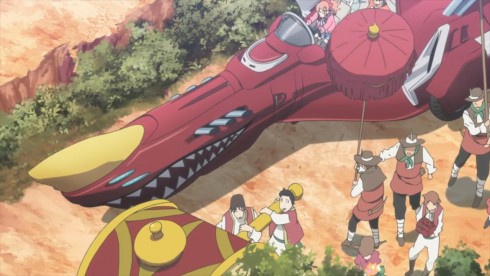 On the way there, things get interesting as the trio runs into a Marriage Ceremony procession. Things being as they are, Sogo gets a bit too close to Kaon, derailing the car and injuring one of the Flower boys. Sogo is asked to step in…. and that’s where things really get going.

See, according to the tradition of the area Sogo and the rest are in, Its customary for the Flower Boy and Flower Girl to be “close”. To make matters more interesting, The couples who became the flower girl/boy pair end up going on to get married themselves. Kaon gets offered the job first, and is clearly flustered, because at this point, only Felia and Sogo are dense enough to not know how she feels about Sogo. 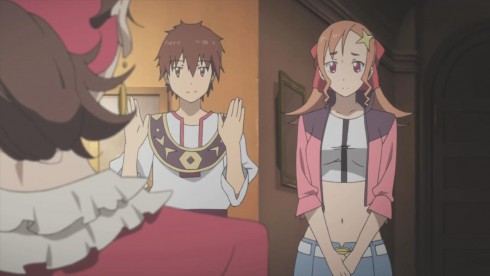 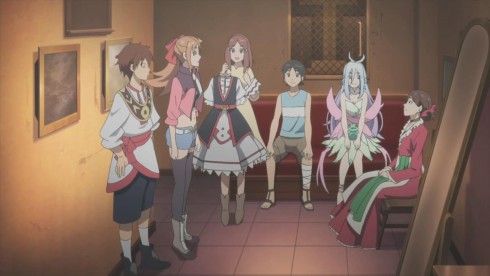 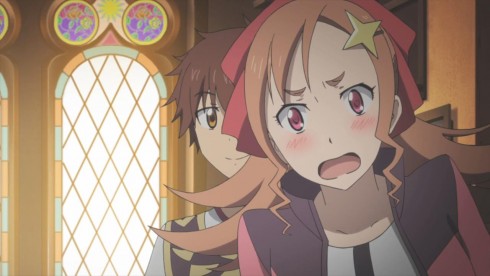 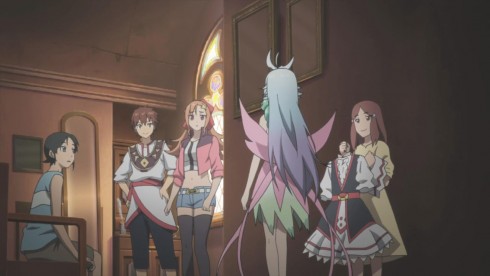 Sogo, being the dense guy that he is, asks Felia to do it instead, and the significance of the moment can’t be overstated. Despite Kaon’s late protests, the opportunity is lost, and Felia ends up basically getting her spot. Unfortunately for her, this whole segment is indicative of a larger issue, one that nearly everyone in the room save for maybe Sogo and Felia get.

Sogo and Felia are happening, if there’s one thing this episode has set in stone, its that. The show goes to rather painstakingly lengths to not only make that clear, but to make sure it makes sense from a character dynamics stand point. So how do you make Kaon, who’s got a nice connection with Sogo, and genuine chemistry with the guy step aside? You have Felia act completely adorable, and unsure about her feelings. 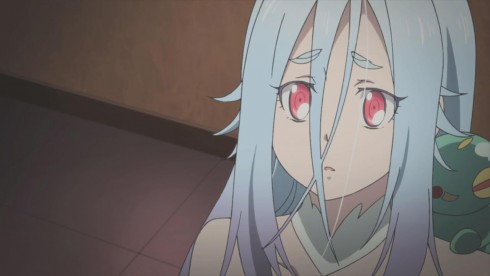 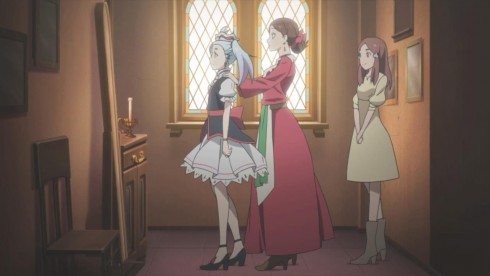 Felia, for the most part, is pretty much like a girl going through puberty. She’s starting to change physically and emotionally, and doesn’t quite understand it all yet. Her asking about what “love” is from the Bride of the ceremony, is just one example of that. The answer the Bridge gives her is an interesting one, but it’s also pretty obvious what the show is going for.

As expected, the marriage ceremony gets interrupted by a bunch of soldiers crashing the party, clearly there for Felia. Its Kaon, despite her pain and jealousy from the whole Felia/Sogo thing, that goes to rescue Felia first. While Moura and Sogo deal with the enemies, Kaon and Felia run and hide. 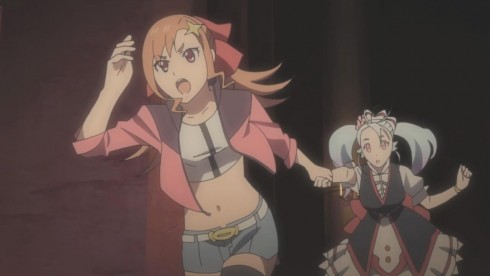 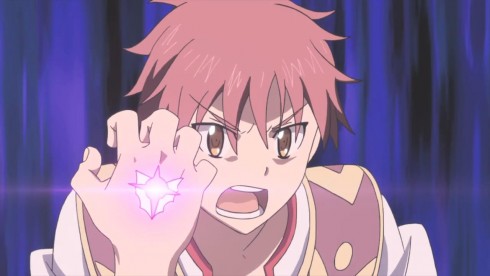 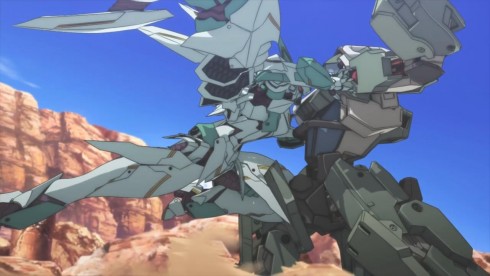 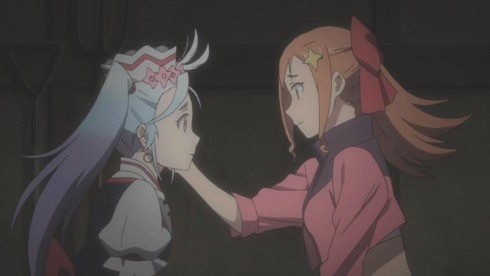 Kaon and Felia being alone is the scene that serves as the major turning point. Felia’s whole declaration of love for Kaon is adorable. Its cute and heartwarming, but its also extremely manipulative writing from a show that’s thus far avoided that. What the show is doing here, is pretty simple, its making it impossible for Kaon to compete against Felia. Felia’s still young and unsure of herself, and she’s an absolute darling. So… Kaon has to more or less step aside now. She has to step aside from being interested in Sogo, and not fight for him, because she loves Felia so darn much.

Granted, this a move that the show has been telegraphing for a while, but it still feels unfair. I think its meant to feel that way though, in some ways, because there are just moments in the episode that make Kaon a tragic figure in this whole affair. There’s a scene earlier when the three are in the car and Sogo mentions Kaon running from her own wedding dress fitting. Kaon’s answer is just enough to tug on the heart strings: “Because My Prince didn’t come to save me.” 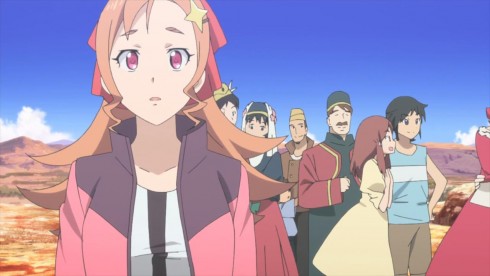 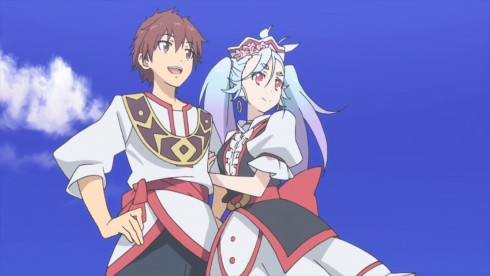 But I think the thing that just completely and utterly seals the deal, is when the big battle is over, and Kaon looks at Felia and Sogo, together.

Its a tough moment for her, and its a tough moment to watch. Its the moment when Kaon just realizes that Sogo isn’t interested in her anymore, and that Felia and Sogo are a “better fit”. I say anymore, because there was a completely different tone to the two of them in the premiere episode. 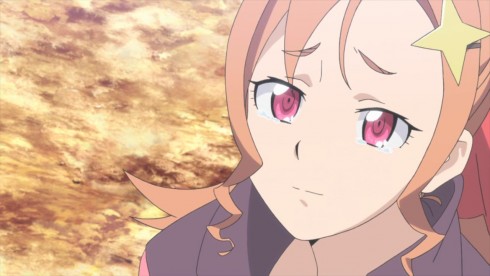 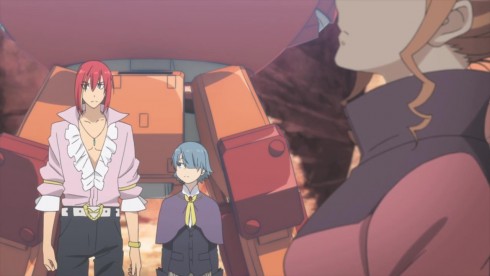 Adding to the complications, is Roman. Roman is a bit of an odd eccentric dude, but its hard not feel sympathy for him too in this situation. He clearly has feelings for Kaon, and he realizes that Kaon doesn’t quite share them. While his insistence to just smother her into a marriage are wrong, I don’t envy the guy in the final scene where he watches Kaon’s heart break as she looks at Sogo and Felia.

Now… The question is, is this a big deal? Is Sogo and Felia actually okay? And I’m not sure if I can objectively answer that question. I know two things, one that I was always more of a fan of Sogo and Kaon, and two that I think I’ve seen the Sogo and Felia angle a dozen times over. I guess, for me personally, I feel like the show has fallen a bit, simply because its pushing for a romance between a girl who just magically aged, and the main character. 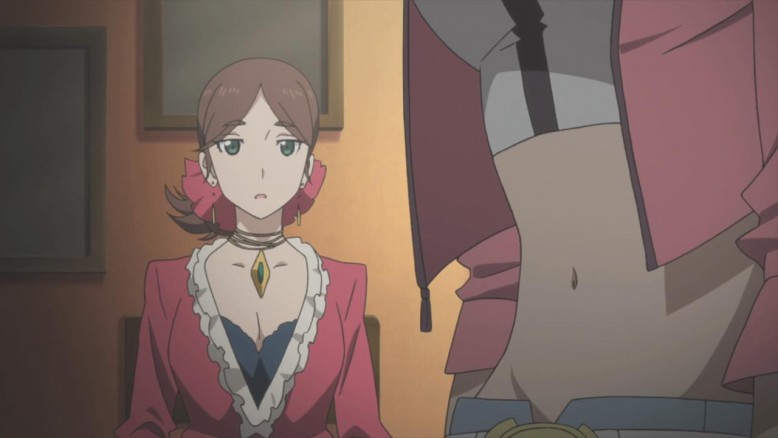 You know Lady… You COULD step in here? Maybe? No… Okay…

Its just how it is sometimes, if you’re into the romantic elements in series like this, then you’ll run into the heartache of your favorite character getting the shaft. I guess the issue isn’t so much so that it happened, its that the series did it in such an obvious, manipulative way.

Where does Kaon go from here? I’m not sure. This was totally an episode about her and her feelings though, and although clumsy, I respect the show for addressing this aspect of the story and moving forward with it. Its over now, so I guess I have to act like Kaon, and just accept things as they are. 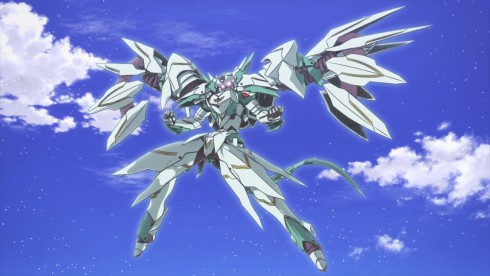 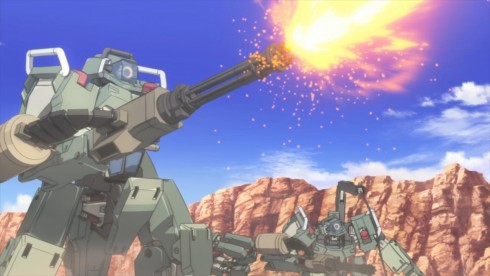 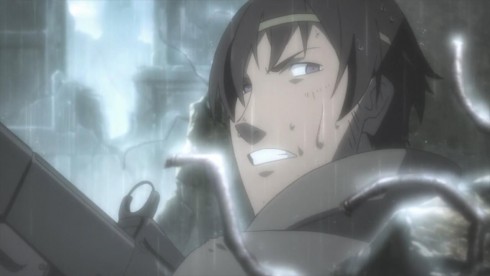 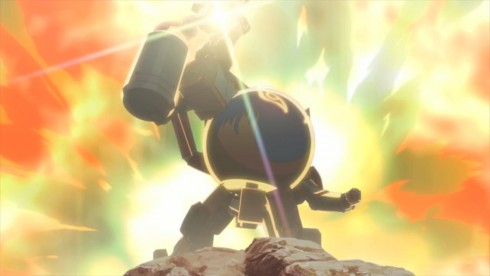 As for the rest of the episode? It was okay. The action was servicable, as usual, and there was a subplot about Gus and his military days that I didn’t quite care for. The villains of the show continue to be a very obvious weakness, and one that I don’t think is going to get better any time soon.

I will say, I thoroughly enjoyed the funny moments that Roman provided as he swooped in to save the day. His little Mech perfectly embodies his flashy, flamboyant nature, and the battle itself was hilarious to watch. I’m not sure how I feel about Roman himself, but in the guy’s defence, we’ve seen very little of him, and most of it has been about his arranged marriage with Kaon. 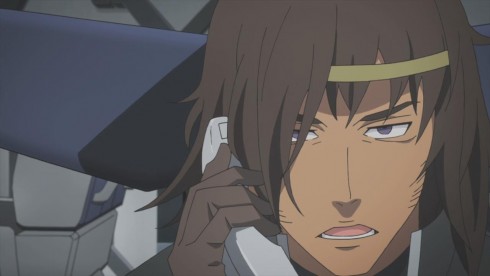 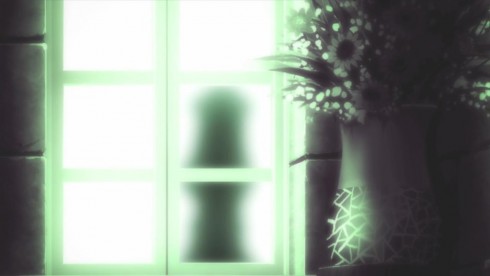 The last bit of news, also a bit heartbreaking, was the reveal of the spy in the ranks. It turned out that the nice bread lady that clearly had a nice adorable romantic subplot with Don Mon, is clearly the spy that’s been tipping off the military. I’m not exactly sure what to make of that revelation yet, beyond just thinking that we’ll get a fairly conventional moment of regret from her later on in the series.

If you couldn’t tell from the tone of this post, I’m not exactly feeling great about the series at the moment. Was it a decent episode? Yes it was. Did I personally like it? Not all that much to be honest. That’s just how it is sometimes though. A story can’t always give you happy feelings and everything that you want. The power of entertainment to affect us on a personal level, is what makes it so awesome. 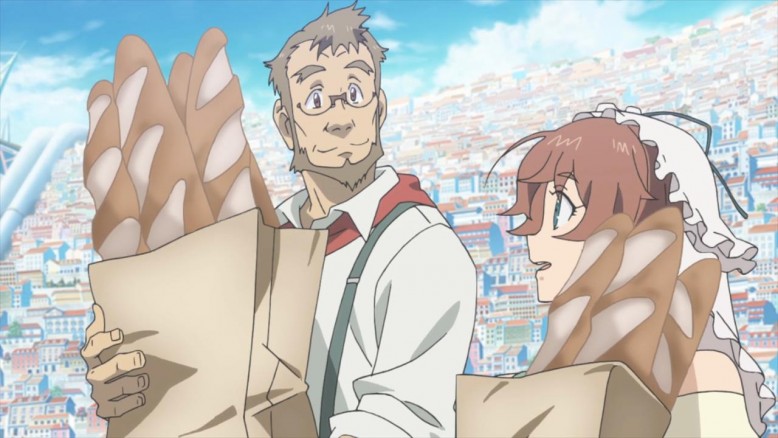 In that regard, I’d say Comet Lucifer did quite well this week. 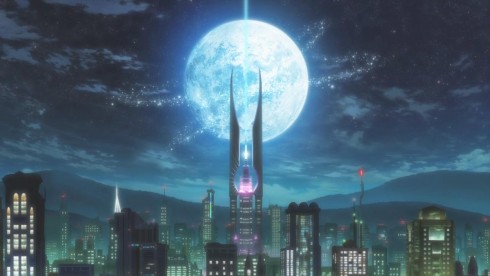 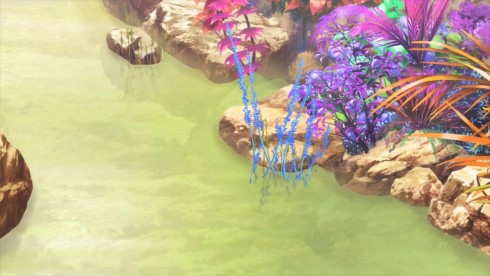 Seems like next week we’ll be moving forward with Felia’s restoration. See you all next week.