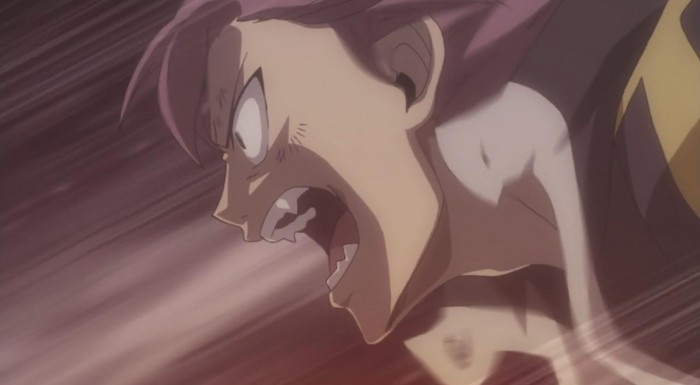 What is this? The week of disappointments for the avid anime watchers? Joining the ranks of Subete Ga F ni Naru, Sakurako-san, even Fairy Tail had an episode that was pretty much a letdown. The larger issue though, is that this isn’t a one off thing. We’ve seen moments like this from the series before, going back as far as last week. 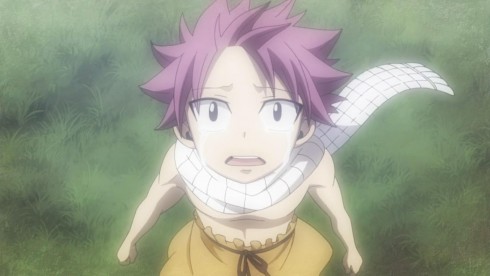 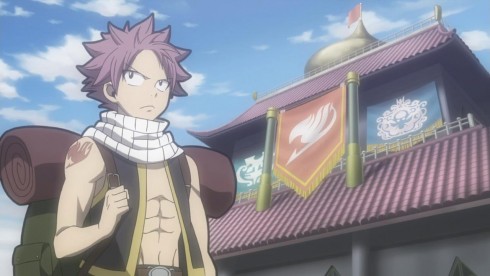 But the issue that is of grave concern is that Fairy Tail is setting into a kind of pattern with its adaption and storytelling, and its a pattern that seems to be taking over the anime industry, and shounen battle shows in particular. The delaying tactics, the stretching things out so that the story can squeeze in one or two moments, and doing it all so that it feels entirely inorganic and unnatural.

At this point, even though we get one or two great moments per episode, its ruined by how much of the episode just feels like a waste of time. Last week I harped on the fact that we had too many side characters simply commenting and reacting to the same situation, and more or less repeating the same idea over and over again. This week had that, and it more or less took over the majority of the episode. 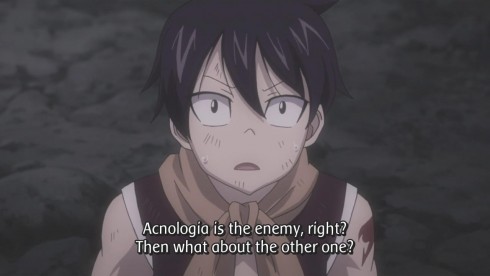 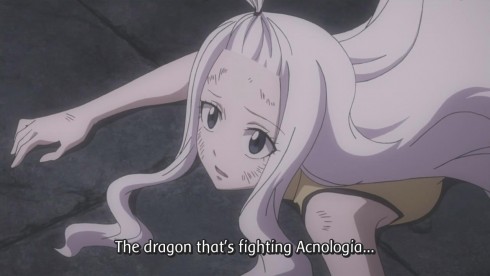 And not only did we get tons of unnecessary segments of characters basically going: “WHAT’S GOING ON?!?!?!” but those moments made some of our more beloved characters look completely and utterly stupid. Erza I think, was the worst offender, content to simply watch and marvel at Kyouka as she not only powered up, but activated Face.

The whole thing was just insulting to the character, and had her pretty much locked into place simply because the plot DICTATED that Kyouka needed to do what she was doing. I suspect, I hope, that in the manga everything just happened too fast for Erza to barely even react, because her just standing there, completely stunned and letting Kyouka do whatever the hell she wanted was upsetting to watch. 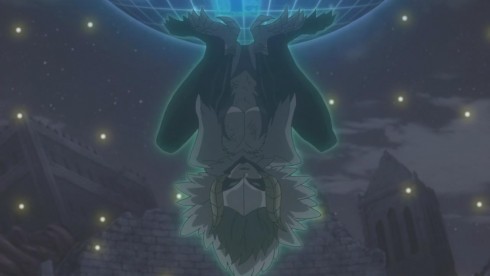 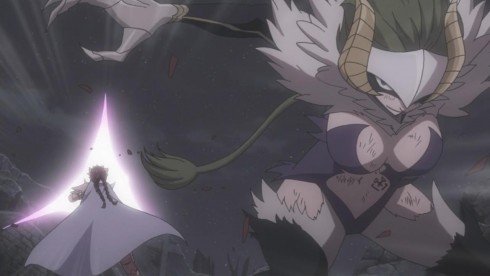 In the end, at Mard Geer’s direction, Kyouka established a Life Link with the Control Lacrima hovering in the sky, and pretty much accelerated face’s activation. There’s the added twist that Kyouka’s life will end as soon as Face Activates, but I was honestly too annoyed at that point to really care.

Igneel’s battle with Acnologia didn’t fare any better. Despite having a fairly lengthy recap and introduction to Acnologia at the start of the episode, we still more or less got all the Side characters basically wondering who the “Red” Dragon was… Which added absolutely nothing to the plot. 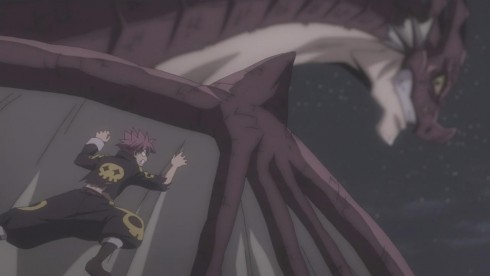 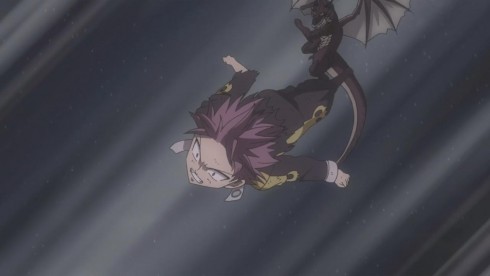 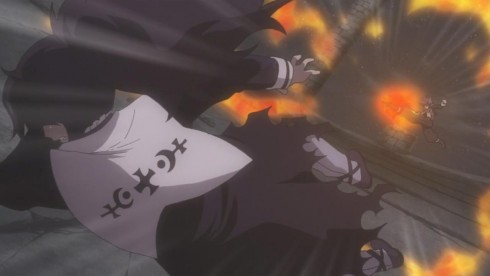 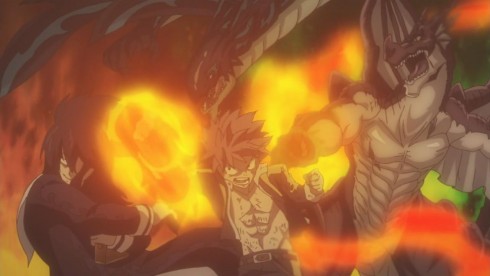 There were some good moments buried in between all the useless garbage. Natsu’s little and negotiation with Igneel was a pretty cool moment, As was the assurance that he would indeed get all his answers.

Added to that the little montage of Natsu and Igneel mirroring attacking and taking out their individual foes was fantastic. Too bad it only last a few seconds, before the story just moved away from the most important matter at hand. This is something that Fairy Tail does very rarely, avoid its most important story elements in favor of padding things out, so that’s one of the reasons why I keep on mentioning it. Its that bad, its that pervasive that it ruined every frigging good moment in the episode. For the show, it really was a new low. 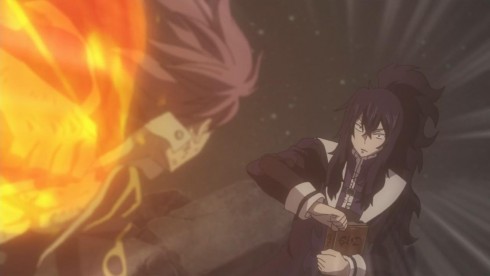 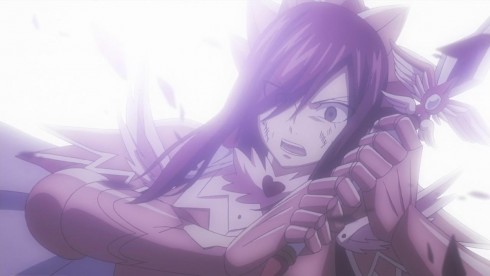 In the end, we have Natsu and Igneel busy taking on Mard Geer and Acnologia respectively, while Kyouka has powered up and is now going to take on Erza. By giving Kyouka a much more immediate connection to Face’s activation, the stakes have been somewhat raised for Erza’s battle, but at this point, I wonder if Erza even deserves to win her battle.

The fact that I’m annoyed by these things, and unsure if its the story itself that’s weak, or just horrible adaption issues, makes me really sad. And given the awesome that happening on screen, I should be sad. I should be talking about why Igneel wants Natsu to steal the END book, not open it or destroy it. I should be impressed by the fact that Kyouka is pretty much kamikaze-ing the Face Launch. I should be excited for Erza to take a stand against it, and I should be pumped for the battle between Natsu and Mard Geer. 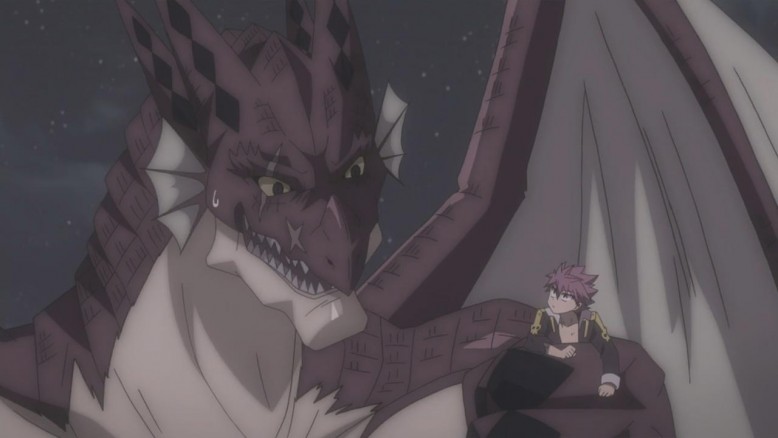 Igneel, Tell me… Is it going to get better anytime soon?

I should be, but I’m not. I’m hoping to God whatever’s changed since the Laxus battle episode will fix itself soon, because otherwise we might be heading into an extremely weak finish to what has been the best arc of Fairy Tail since it started… 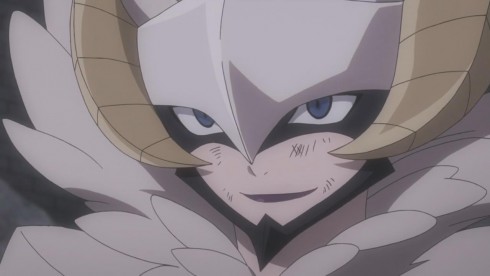 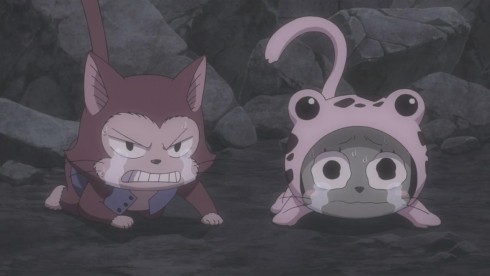 Kyouka vs Erza takes center stage next week, but I’m already seeing too much Exceed in the preview there…