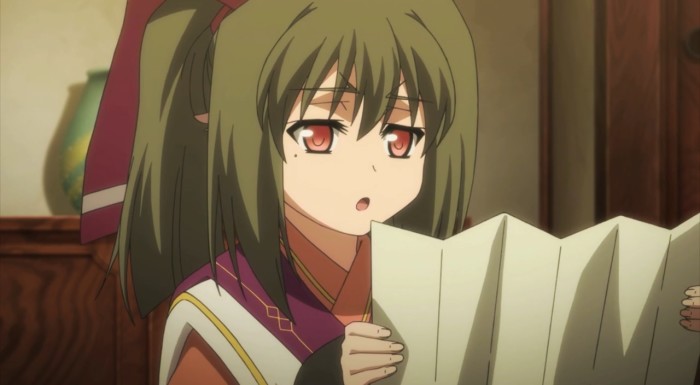 Was nice to get into the capital where clearly some surprises and interesting situations await the main cast. I will say there was plenty of interesting surprises along the way and will say that Nekone was a nice addition to the group. At least her issues were a bit more interesting than the constant BL-related fainting that Rurutie was going with this week XD. In a lot of ways I thought she was a pretty understandable and likable character. While her not giving Haku a lot of slack might be seen as too much in some cases, I don’t think it was a big deal here. In reality Haku does have a lot of comebacks, is a bit lazy, and isn’t overly motivated. Those are just things that make Haku who he is. It took some time for Nekone to find the good qualities that he had. Nothing wrong with that. And in the end while her opinion of Haku improved, the qualities that she wasn’t a huge fan of didn’t vanish either. It’s not like he showed her all the awesome things he was just hiding, just that eventually she could pick up aspects of Haku that her brother liked. 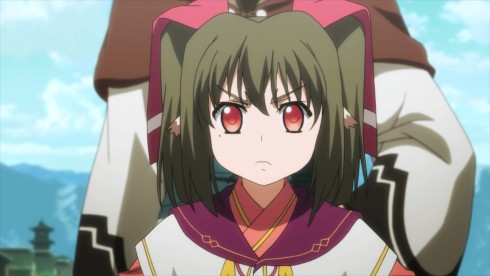 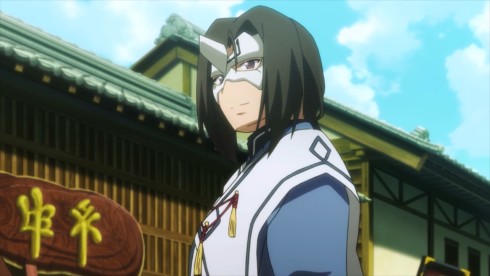 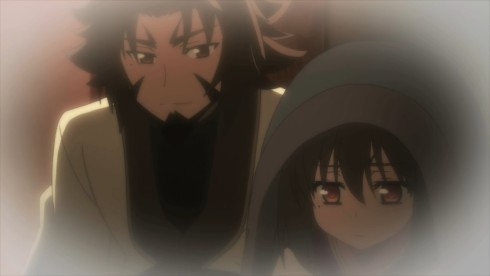 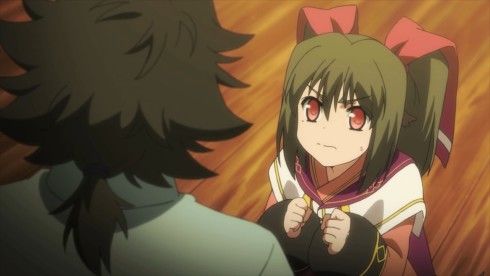 Speaking of Nekone’s brother….I’ll fully admit to not having seen the reveal coming. I was about as lost as Haku until the last few moments before Ukon revealed himself. It made a ton of sense, but still was a surprise when it happened. I didn’t expect Oshutaru to be Ukon. That’s a pretty solid bit of disguise work.I give the guy credit, he doesn’t just go with a simple thing like a pair of glasses XD. I presume a fake beard and messing with his hair does the job pretty well. I really didn’t see that coming and certainly throws a lot of speculation out the window. Although it does make things interesting that Oshutaru is kind of playing both sides. He has the public position and his responsibilities as general, but he also goes out into the world as Ukon and does other jobs. In a sense he probably does it so he can assist others without his official position acting as something to hold him back. There is some freedom to having a secret identity and just living out in public as that person.

In the end it made for an interesting reveal. Makes more sense now why Nekone was such a big fan of Oshutaru. I thought she was just a big fangirl of the famous General, but makes sense that her brother is the big star in her life. At least this takes care of the money issues for Haku. Having a ‘patron’ is a pretty handy thing and should keep him from having to work at jobs he’s not really suited for. Though it may put him in more dangerous situations than he would like to be in. Does make things interesting though. One of the more important people in the country now has quite the interest in Haku and Kuon. Those two went from relatively unknown people to pretty connected ones in the span of a few episodes. I’m sure the key thing is that Ukon knows that Haku is a darn smart guy and can put those brains to good use for problems that he himself hasn’t been able to work around. 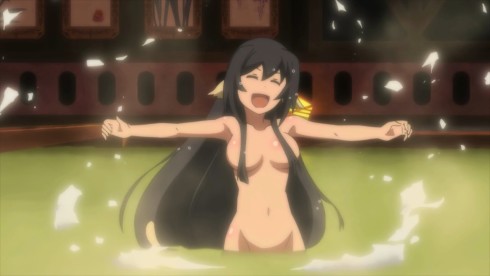 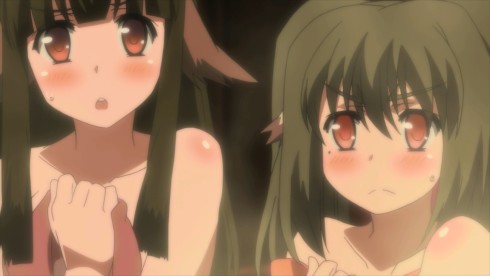 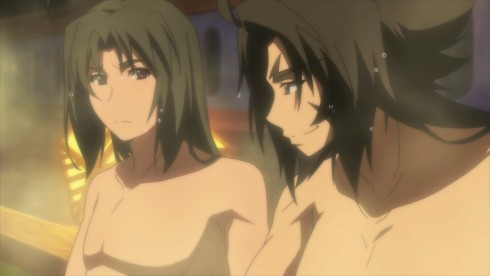 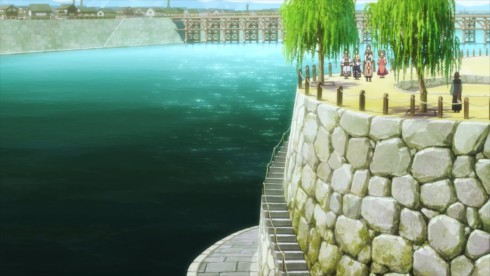 There’s just no avoiding the fact that there was a ton of fanservice this time around. For both sides in a sense since the BL vision of Rurutie was pretty prominent throughout the episode. But of course on the other side was the couple of bath scenes and the focus on the craziness that is Kuon XD. That girl loves baths to the extreme. It’s no wonder she was willing to go through all the effort and work that it required in order to have a path while traveling. The girl really had to do a lot in order to get a path out there and now we can see why. You give her a deluxe bath like this and she just goes crazy. Of course part of it was her desire to go into the bath with her friends. Can kind of get the feeling that Kuon has been on her own for quite a while that when she has the chance to make friends it means the world to her. Makes you wonder about her background and just why she left on that journey to begin with.

It does make you wonder as well about the country they are in here. Haku made some points and comments about things they were seeing along the way. Like an Emperor who set up that country and capital and yet is still alive after hundreds of years. Who the heck is that guy? Then of course is the construction of the buildings. Despite being pretty smart, there wasn’t much Nekone could say about some of the construction of the buildings. Especially the holy court which was made of….holy stuff. There wasn’t much detail to go on there. It does make you wonder about this country and the person who is behind it’s very existence. 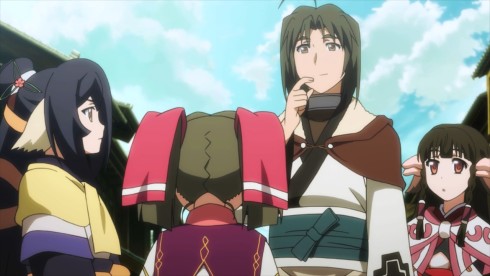 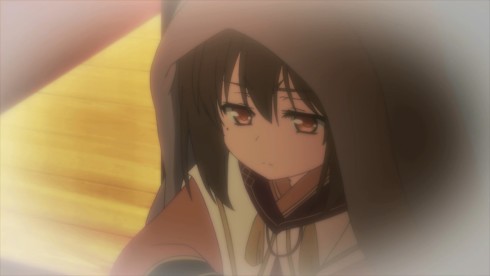 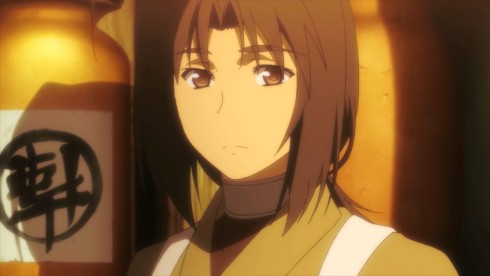 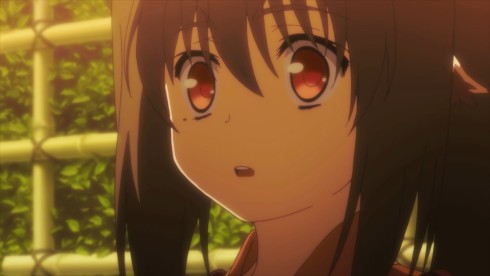 Once again there was a nice focus on the fact that Haku really is different. The guy isn’t at all bothered by his lack of motivation and willingness to procrastinate. Certainly the problems of tomorrow are problems of tomorrow, but if he doesn’t deal with them…they’ll just get bigger. A fair point made as well that he can’t read the language. But of course, he has knowledge but not of everything. Especially not things of this world. So he can’t figure out the written language and needs help there. But his logic and problem solving is top notch, that isn’t held back by a language issue. Although really he’s lucky he can just speak the language, but that would have made for an even bigger issue that I’m sure the show probably doesn’t want to deal with. So I’m ok with that.

I enjoyed seeing Haku getting used to a new job which he luckily won’t have to make his full time profession. Can’t wait to see what Ukon (I don’t know what I’ll end up calling him full time) has in store for Haku. And of course I’m looking forward to finding out more about Kuon who remains a mystery. Will again say that Nekone was a nice addition to the cast. Nothing unusual, but a nice character. A smart girl who sadly didn’t find it easy to get along with others or trust others. It might just be because she is so much smarter than her peers and lives in an unusual family. That level of secrecy that involves her brother might have left an impact on her showing that people can literally have two sides to them. At least she gets along quite well with Kuon now and Haku. 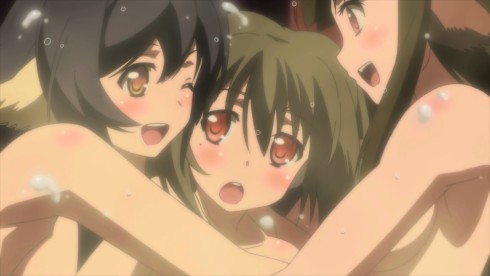 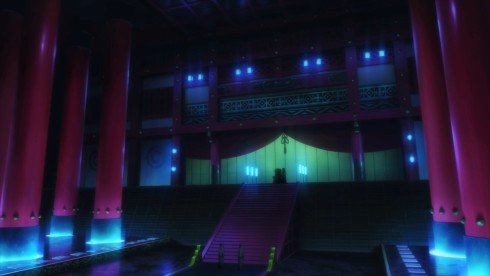 I’d say this was a bit more fun episode than last week. It was a pretty strong episode and had some good laughs along the way. The world building continues and so does expanding the main cast. I’m still curious where the story is going to go though. It’s building things up and getting Haku and Kuon more involved in the lives of others, but the overall direction is still hard to read. Where the original story was going to go was pretty easy to read at a certain point, but here it’s still building up to something. I’m sure it will be something to remember though. For now will just have to keep on watching.
Score: A-