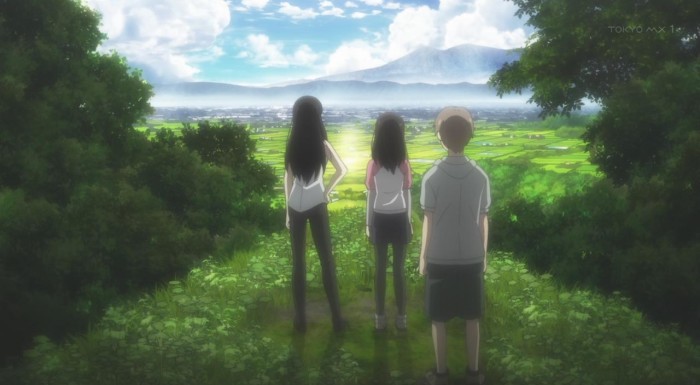 Sometimes, the third time isn’t quite the charm we expect it to be. Color me surprised, but I’d say that much like Comet Lucifer, Sakurako-san’s third episode was the weakest one thus far. I say that, but unlike Comet Lucifer, this wasn’t an unbearably hard to watch episode at any point. Its just that it felt strangely mediocre as a whole. Mediocre, average and okay are just not things I expect from this show, especially after it made such a strong first impression with its opening pair of episodes. 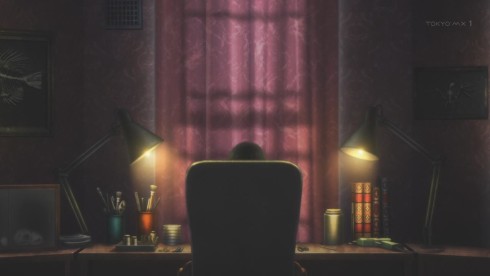 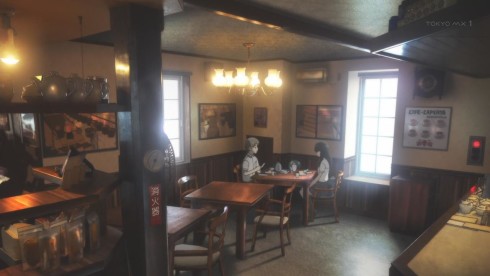 Taking a break from the intense and thrilling, this week’s episode felt a lot more relaxed and tried a more somber approach to its storytelling. The first half of the episode was more or less what I’d wager is the continued highlight of the show, Sakurako and Shoutarou just kind of hanging out. Surprisingly, the matter of the Soutarou name was brought up this week and the mystery was pretty anti-climatically resolved. Soutarou was/is Sakurako’s dead younger brother, and its clear that her affection and interesting in Shoutarou is clearly because he reminds her of the brother she lost.

This whole fact will have some important ramifications I’m sure, but the way it was revealed felt very “matter of fact”. It was as if the show itself was trying to kill some of the excitement that it, itself had built up. “Nothing to see here, move along” is hardly the vibe I got last week, but its what the show chose to go with. So with that, at least, its clear why Sakurako is so fond of Shoutarou, but the more fascinating side of the equation, is from Shoutarou’s perspective. 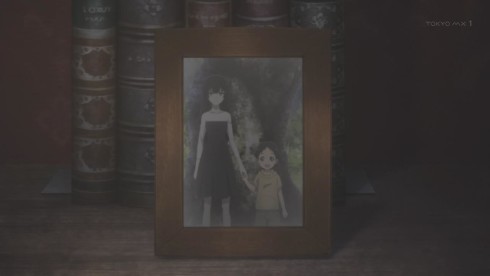 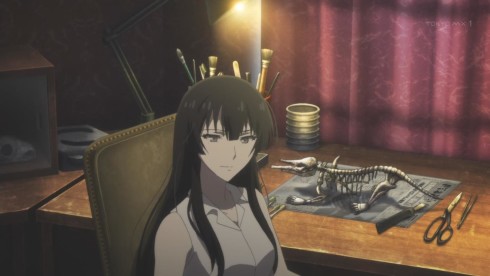 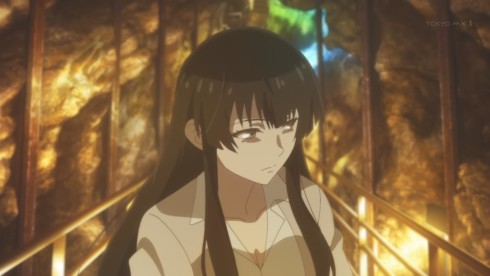 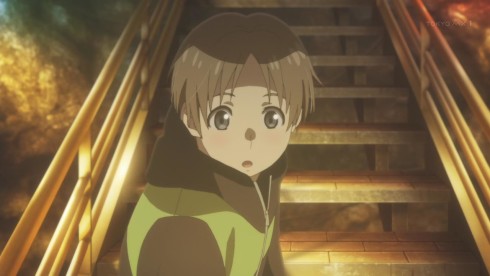 If there were any doubts as to Shoutarou’s romantic interest in Sakurako, then this episode pretty much laid those to rest. Shoutarou is crushing hard on Sakurako and I can’t help but feel for the guy. Some of us have been there, we’ve met the older woman that we’ve become enamored with, interested in, but who we obviously couldn’t have ever had. I can’t say I’ve actually been in a similar situation to Shoutarou, but I’ve seen many a friend who have. Its an unfortunate situation, especially for a teenager trying to grow into an adult.

Shoutarou is very much still a youth, and by most common measurements, he’s a pretty well adjusted one. Yet… When it comes to Sakurako, he feels the urge to grow up as fast as he can, to act more maturer to her, and somehow compensate for his age. Now, I’ll be the first one to say that age is merely a number, and I’m aware of many couples with pretty significant age gaps, however… Shotarou is still a minor, while Sakurako is very much a legal adult. 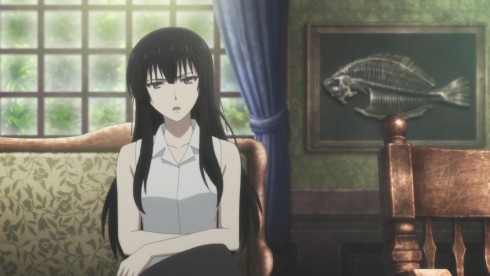 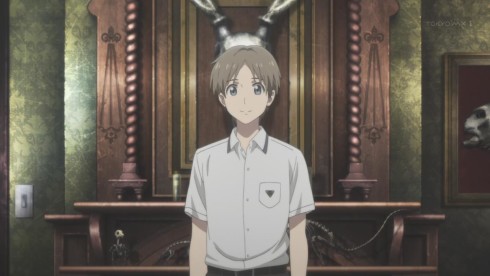 In that sense, the way Sakurako treats Shoutarou, calling him “shounen” (young man/boy) is very appropriate. It creates some distance between the two of them, and at the very least, doesn’t lead the kid on. I’m not entirely sure if Sakurako realizes Shoutarou’s feelings for her, but I’d wager that she does. Given how preceptive the woman is, I’d say she full well knows what Shoutarou’s thinking and feeling, but keeps him around for her own reasons.

Its worth noting that the current relationship, in all its muddled glory, is fine. Both parties are getting something out of it, and no one is entirely stepping on anyone else’s toes (or feelings). Life is definitely a lot more interesting for both of them when they’re together. Does Shoutarou have a shot? Or will he forever be the stand-in brother? You’d think that when the guy graduates high school is when that question  can actually be asked, but I’m not so sure the show itself will wait that long. I hope it doesn’t anyway, but as to what answer it gives us, that will be the definitive moment, won’t it? 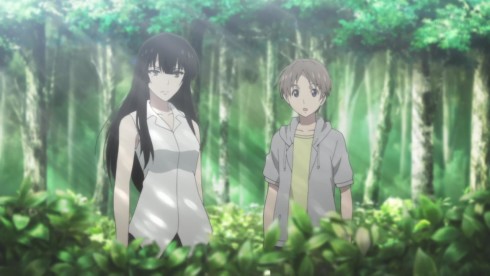 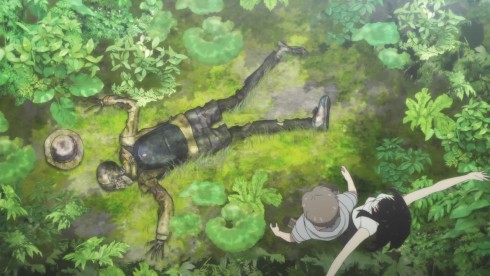 Beyond Sakurako and Shoutarou though, there was also a new body this week, and one that hit pretty close to home. I was actually really really taken off guard by Yuriko’s return this week, and not in a good way. The whole thing felt like too much of a coincidence, and for once, I really couldn’t suspend my disbelief. I mean… It just so happened that the body that Sakurako and Shoutarou came upon on while on a completely random stroll through a nature trail, was the body of Yuriko’s grandmother? Yeaaah… Sorry but I’m not buying that.

This was one place where I think the series needed to give some space. We just saw Yuriko last week, so jumping so quickly into her story felt jarring, and weird. Speaking of which, while it was understandable, it was still a bit weird to see Yuriko act so dramatically and emotionally with regards to her grandmother. It wasn’t that I expected her to not be emotional, or depressed, or cry over her grandmother, but it was the random and sudden outbursts, and overly done melodramatic dialogue that just threw me off. 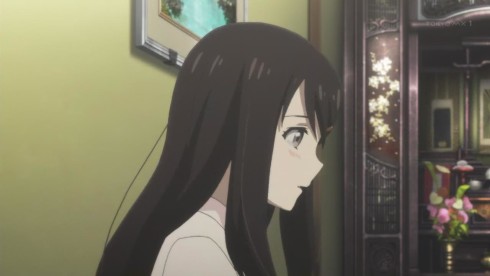 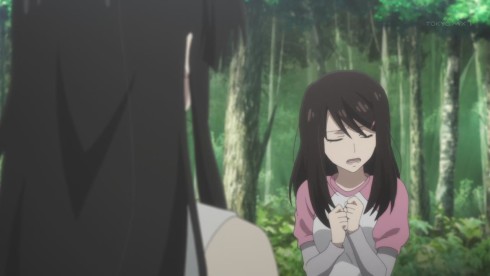 Sakurako-san is a show that’s demonstrated the ability to walk the fine line between exciting and melodramatic. This week, the show just felt like it was trying too hard. It tried to sell us on the pain, the confusion and the complex sea of emotions that I’m sure Yuriko would feel in her particular situation, but it all just… felt off.

The story itself was a beautiful one though. The idea, the concept of Sakurako helping Yuriko come to terms with her grandmother’s death by showing her the actual reason for her death, and disproving her suicide was a great one. It was the show, once again, tapping into that human element that it does so darn well. Its just unfortunate that it all happened too fast, and the emotion and resolution for the whole story didn’t feel quite as earned. 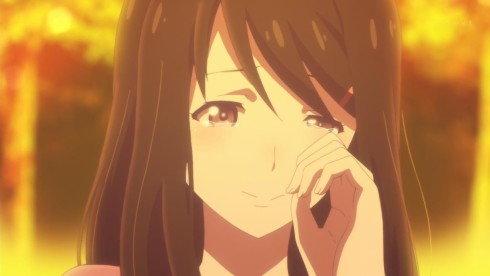 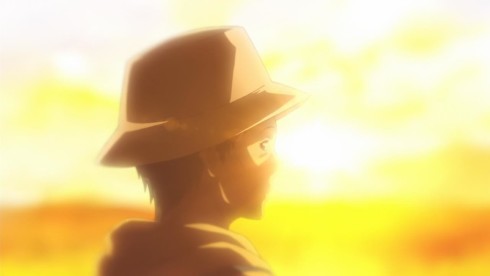 In the end, Yuriko’s grandmother died trying to experience the sunrise that both she and her husband loved, and as I think we can all agree, there are worse ways to meet your end. That moment, at least, felt powerful.

There is one other thing though, that’s worth complimenting, and that is the stellar visuals. Its easy to forget, but man, Sakurako-san is a gorgeous looking show. Whether it was the dark, musty brown interiors like Sakurako’s office, The cafe that Shoutarou and Yuriko have cake in, the nature trail or the that GORGEOUS landscape from atop the hill, everything just looked so breathtaking. If nothing else, the art direction and animation for this show continue to impress. 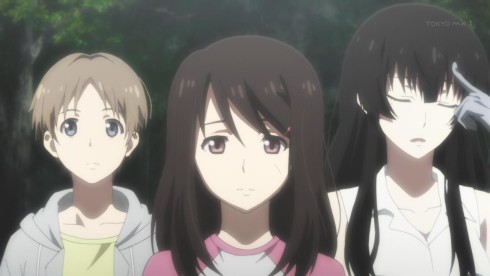 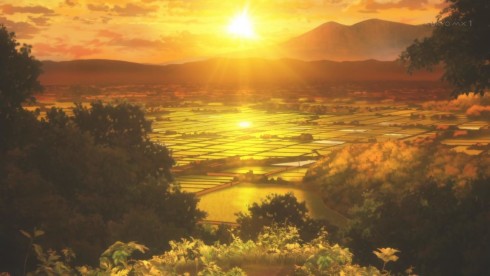 As an overall package though… Was this an off week for Sakurako-san? I honestly think so, but only because my expectations for this show are slightly higher than usual. After two great episodes, okay doesn’t feel quite as satisfying. Hopefully next week will fair better. If not, hey, at least even at its “low points”, Sakurako-san no Ashimoto ni wa Shitai ga Ummatteiru is still a fairly entertaining watch.