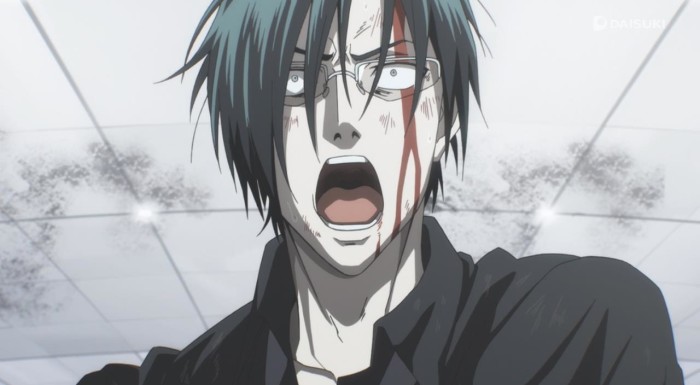 So wait… Let me get this straight, What Saitama’s saying is that anyone can do it if they just worked really hard? Well then… I guess I’ll go and erm do that training menu then. Then again, I do like my hair so…

This week, unsurprisingly One-Punch man continued to dish out the comedy jabs at a steady rate, and with it, we got back to the solid stuff from the first episode. One-Punch Man is an interesting show in that its so beautifully drawn and animated, so gorgeous to look at, but the core elements of the story are just ironic, well timed jokes that play with your expectations. Nothing against Genos, who’s an awesome character in his own right, but the show just shines brightest whenever the focus is back on Saitama. 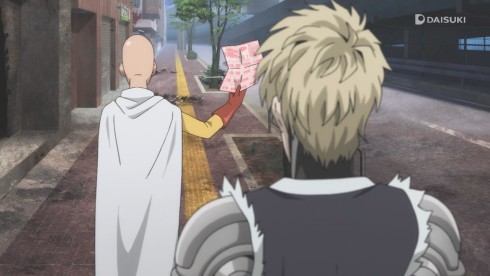 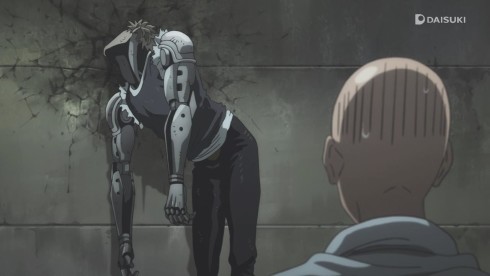 The nonchalant, uninterested and matter of fact way in which he just goes about doing everything is where all the hilarity comes from. Put up NEXT to the extremely serious, methodical and diligent Genos, the laughs just let themselves loose. They make a fairly good pair, and its almost eerie how well the two settle into a duo like pattern, with each making up for something that the other lacks.

Genos is clearly young and very much still trying to find the meaning of things like true strength, his purpose in life and what not, while Saitama has more or less found them, though how exactly? I’m not sure even he quite knows. 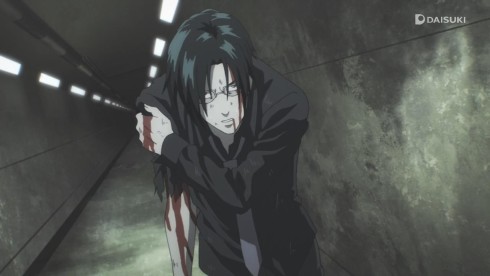 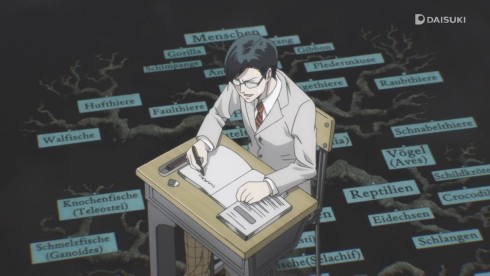 The Macguffin this week was none other than Genus and his “Home of Evolution” (not to be confused with the CYBORG Genos). I call him a macguffin, because it was clear that his entire storyline was more or less created to serve as a punchline for a “tl;dr” (Too long didn’t read) joke. The actual backstory and motivation for the so-called villain was more or less the standard fair that we’ve seen time and time again in super hero or shounen entertainment.

Genus is another young prodigy and genius that ended up seeing the rest of the human race as inferior, and wanted to articially evolve humans to their “next stage”. This whole idea is more or less just something for Saitama to break down by his own existence. When Genus realizes that Saitama and Genos are coming for him, he promptly releases his lab’s strongest creation, which even he can’t quite control. 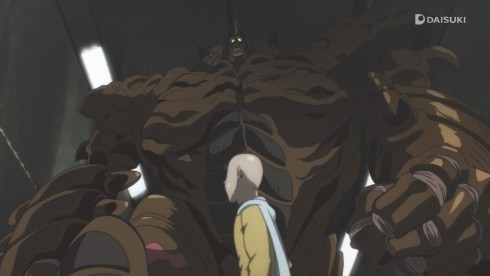 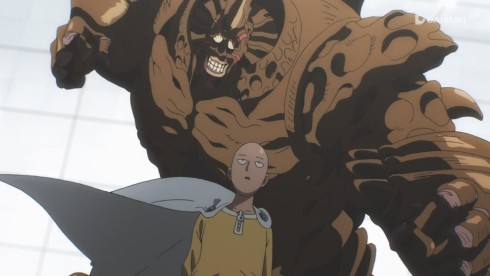 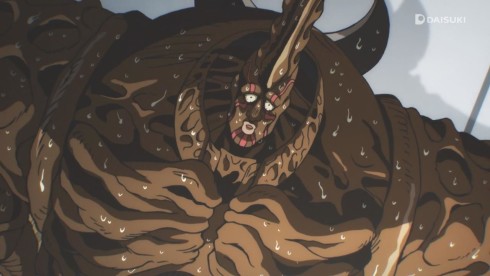 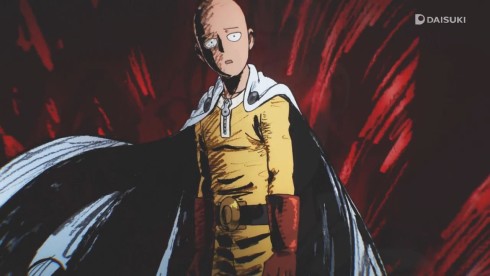 What comes next is something we’ve become quite familiar with already. Saitama’s opponent, a monster by the name of Carnaga Kabuto continues to scream and howl about how strong he is. Genos also takes the opportunity to take him on rather seriously, and while he looks amazing in action, he’s not much of a match for the monster.

Its only when Carnage Kabuto attempts to attack Saitama, that things get really interesting. As soon as Kabuto actually tries to attack Saitama, his own instincts warn him of the instant death that awaits him. The question then turns to how exactly Saitama became as strong as he is, and that’s where the episode’s best comedy bit also hits. 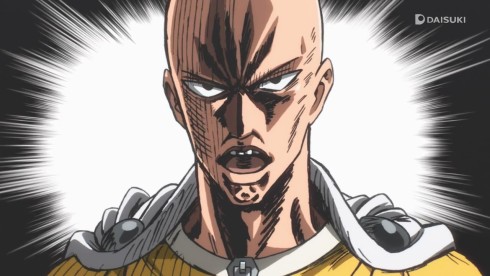 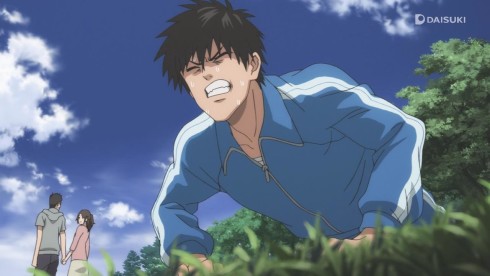 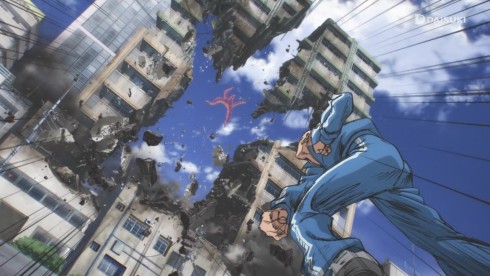 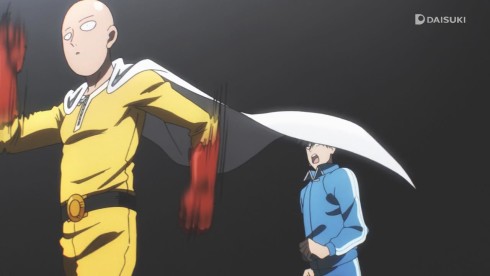 Its really funny, seeing Saitama build up the whole reveal, telling Genos, Kabuto and even Genus about his so-called secret. The secret turns out to be a training menu of 100 pushups, 100 squats, 100 situps and a ten kilometers, while obviously not letting himself use amenities like Air Conditioning. The looks on everyone’s faces after hearing that… are priceless. Everyone’s just completely dumbfounded, and understandably so.

The thing that just really seals the deal is how serious Saitama is as he reveals his “harsh” training. There’s even a cliche line thrown in for good measure: 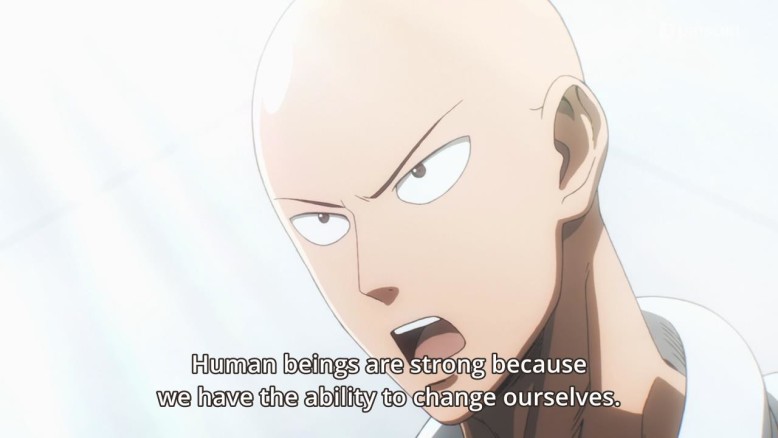 I know cause I read it in a manga last night!

Understandably, everyone in the room doesn’t quite believe Saitama, and think he’s joking. Now… as to the validity of Saitama’s whole story, I don’t really doubt him. If we suspend our disbelief for a second, and look at Saitama as a character, it all makes a lot of sense. Everything about Saitama just screams boring, anti-climactic and deceiving, yet he’s got immeasurable strength and power in spite of that. It makes sense, therefore, that the actual reason for his strength would be equally boring and fairly standard. There’s just something ironic about a cyborg, a Mutant and an evil genius being told by a bald man that they just have to “work hard” every day.

As comedy, Saitama’s entire story works, it makes sense tonally and is inline with everything the series has shown thus far. Part of me though, does wonder if there’s something more to it. If Saitama, perhaps, unintentionally awakened something inside of himself when he pushed himself to the brink. Since its pretty clear that Saitama just kind of realizes the changes to himself one day, there’s enough room to have his strength come from some external source, should the story choose to go that direction. 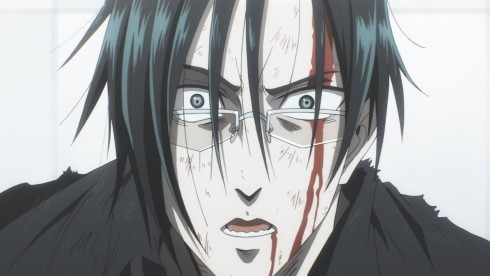 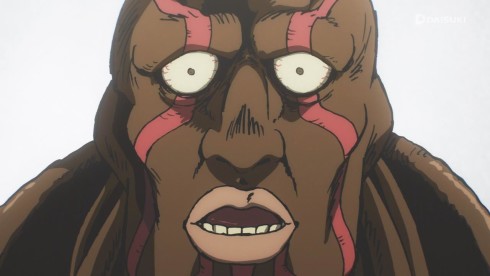 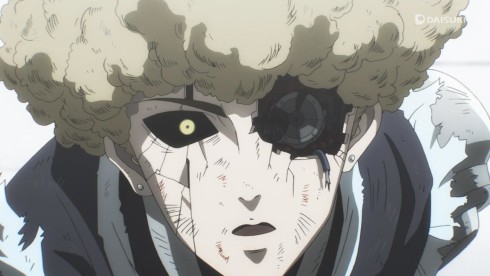 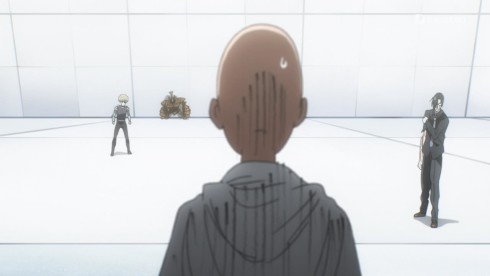 Will it though? Is there something more to Saitama than just really training hard to the point of losing his hair? I don’t think so. I think for how beautiful, and epic the show can be, it is first and foremost a comedy.

THAT, I believe, is why the show ends the big battle between Kabuto and Saitama with a punchline about potentially missing a supermarket sale. There’s a second, a moment, where the audience almost thinks that hey, Kabuto might actually be a threat to Saitama, especially if Saitama himself is mumbling about having made a “horrible mistake”. It turns out though, that he just ended up getting the day wrong, and is afraid that he’ll miss out on a sale. 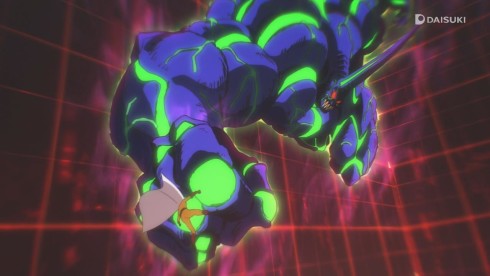 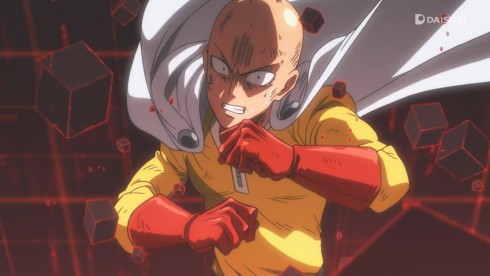 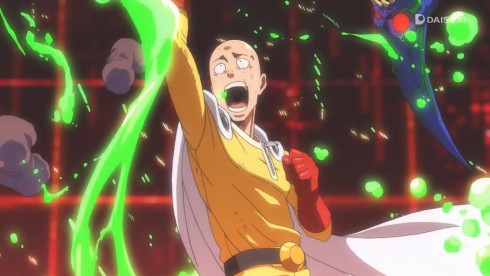 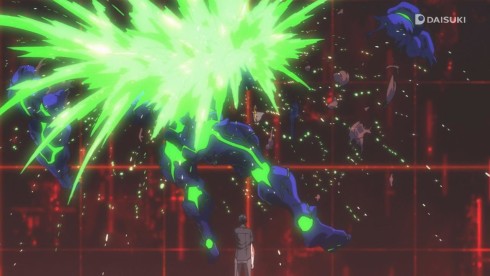 The fight ends with another “One-Punch” finish, and there’s something that just feels “right” when Genos ends up calming Saitama down and the two just run off to try and make the sale in time before it closes. And of course, Genus is left confused, bewildered and generally wondering what he’s been doing with himself his entire life.

That really is about it. There’s a little nugget at the end of the episode, with some kind of government organization surveying the damage that Genos was responsible earlier in the episode, which I’m sure will bleed into whatever we’ll get next week but… yeah. 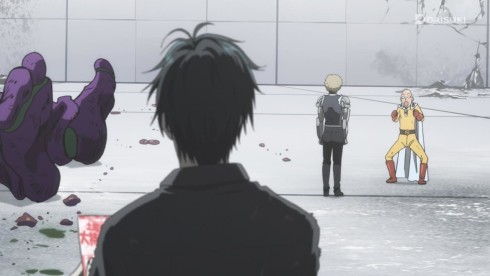 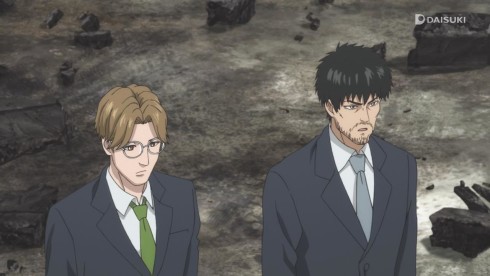 I’ll be honest, its getting sort of difficult to really talk about One-Punch man, and not because there’s not a lot happening. The real problem, if there is one, is that the show is something that just kind of speaks for itself. One-Punch Man is a brilliantly produced show, with extremely sharp and witty writing and a very “you need to watch it, to to get it” mantra. There’s not a lot to theorize, or think about, just a ton of stuff to marvel at and be in  awe of.

I suppose that just falls in-line with the general tone of the show itself though. Regardless of my personal failings as an episode blogger, however,  I continue to enjoy my time with the show every week. I’m also looking forward to whatever crazy character and hilarious moments we get next week. Sometimes, I guess you really just have to sit back and watch, and One-Punch Man is one of those rare shows that does it all so well.