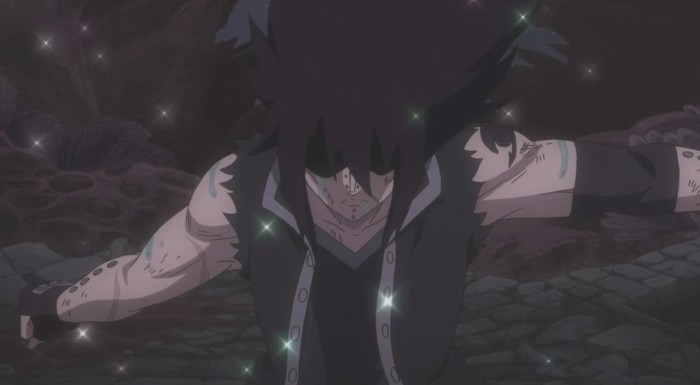 Why can’t things be this good every week? This week’s Fairy Tail episode not only delivered some truly epic moments, but paced them well, and felt very razor sharp in its focus. Even the recap at the start of the episode felt appropriate in length. Everything was just right this week, which made enjoying the episode so much easier, and more importantly, the immersion never really broke.

If there’s one criticism I have for the Tartaros Arc and the second Fairy Tail series in general, its that its not as consistent as the first series when its actually adapting manga material. I understand that filler episodes and arcs will be largely forgettable, if not painful but… When the source material itself, which is stellar I might, gets needless filler thrown into it, its harder to swallow. Last week was the prime example of this, where we lost half the episode to pointless filler and scenes that just aggravated. 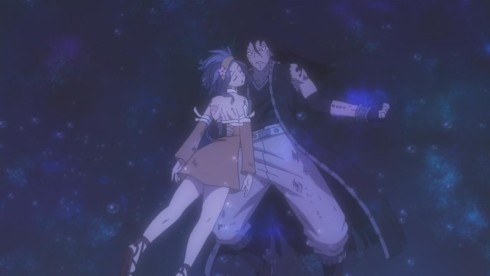 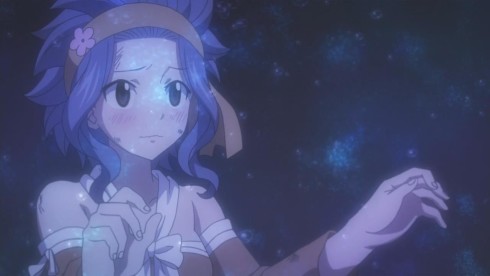 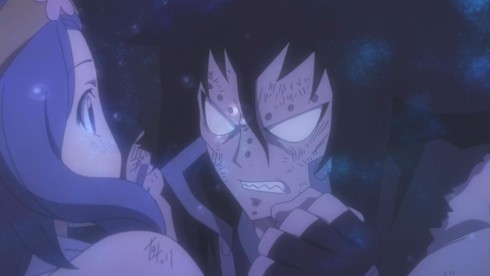 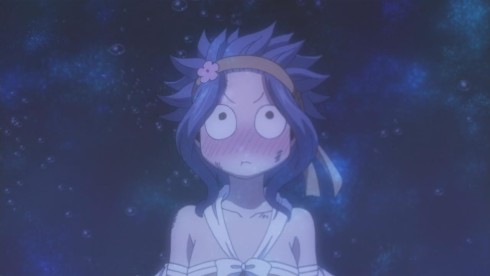 This week though? The episode was gung ho from the start. We picked up right where we left off last week, with Gajeel taking on Torafuzar, having gotten a air from Levy to keep him in the game. I particularly enjoyed the nice little moment between Gajeel and Levy amidst the chaos. Unlike the pointless bickering between Natsu and Gajeel, it made a lot more sense given the circumstances.

I mean, how could you not smile and chuckle as Levy shyly fidgted when Gajeel asked her to “do it again”. What is kind of funny is that while Levy might’ve kissed Gajeel and given him “all her air” (wink, wink!), It seems that Gajeel isn’t quite aware of happen. And yes, it was pretty darn funny and adorable that Levy’s first instinct was to go to Gajeel and “share” her air rather than use her Solid Script Magic. Even with that though, I’ll take what I get from Fairy Tail on the romantic front. What was equally cool was how Gajeel and Levy worked together as a team to take on the problem in front of them. 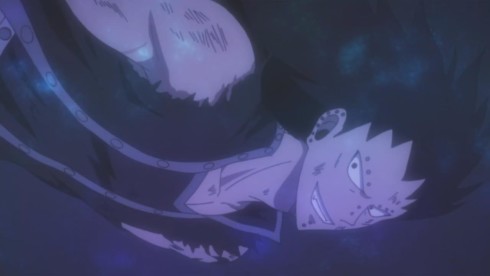 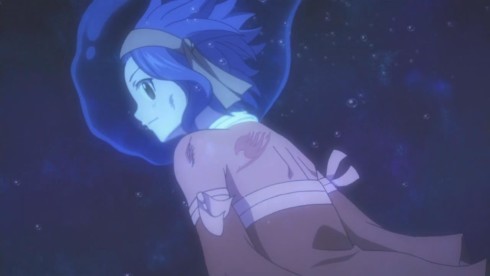 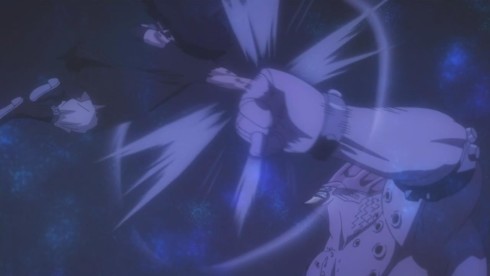 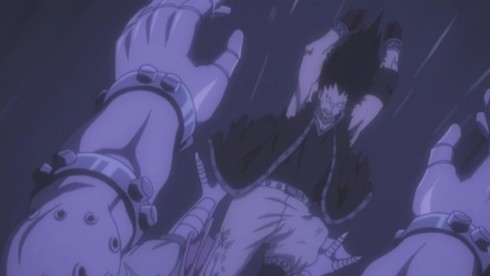 Levy worked to make sure everyone didn’t drown, while Gajeel took on Torafuzar once and for all. Surprisingly, it wasn’t just a few quick hits from Gajeel that did the trick. The battle with Toarfuzar still had some life in it, and with it a new crisis for Gajeel. We found out this week that the poison in the water was carbon, which made a lot of sense. Torafuzar also was able to turn his body into diamond form, which by all modern definitions of science, is the hardest material in existence.

Not too far into round two, Gajeel got overwhelmed as Iron can’t really beat Diamond. It was here that we got a beautiful flashback sequence that I’m not entirely sure is anime original or not. It seems like something that would work perfectly as an addon to the main story, and would’ve potentially cut from the manga for time and pacing concerns. I really enjoyed the look back at Gajeel, and how much he’s changed since we first saw him. 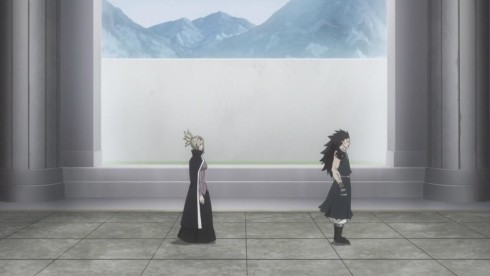 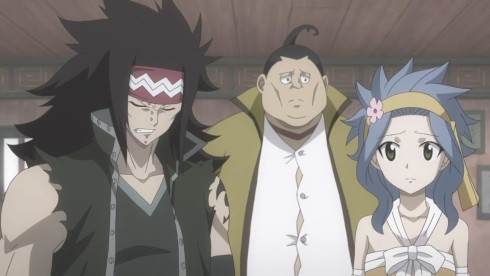 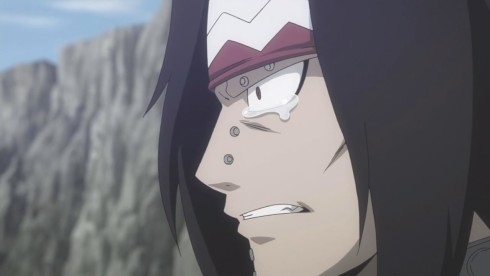 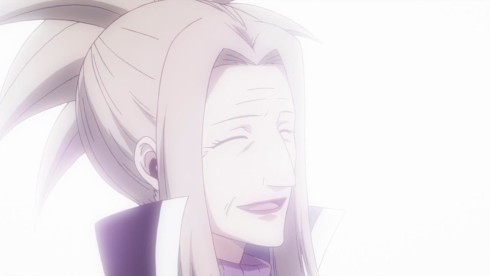 Having a character from his past, on the magic council no less, being the one to believe in him was a beautiful moment. I don’t think we’ve seen Gajeel ever shed a tear for anyone, but it felt very appropriate. I was pretty moved by Gajeel’s declaration of living a life that had meaning, based on what the old woman had told him before. It was a nice, classic shounen moment of the hero remembering something important from their past, and using it to drive them forward. And just in case you forgot how important Levy is to Gajeel, she appeared throughout the flashback moments too.

In any case, it was here that Gajeel ended up gaining the upper hand. While I loved the awesome character moment of Gajeel overcoming himself again, and defeating Torafuzar, I have to say, even with Gajeel leveraging all the carbon in the water and powering up to Steel, he couldn’t have taken out diamond. Nothing except Diamond or perhaps precision lasers can cut through diamond after all, so that was a bit odd. 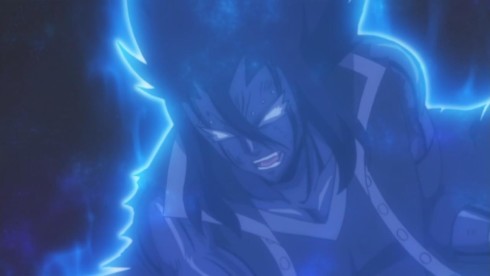 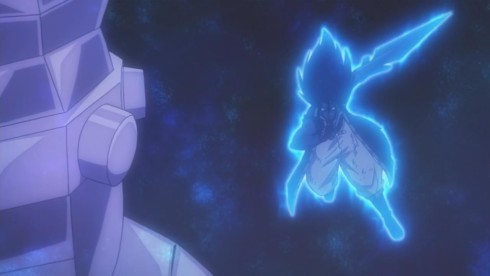 Much like the Wendy powerup, it was Gajeel leveraging a one time power up to defeat Tartaros but… In this particular case some of the oumph! was lost by the fact that the whole idea completely contradicted normal fact. That random fact aside, the fight ended spectacularly, and we even had Gajeel end it off with a jab at Natsu: 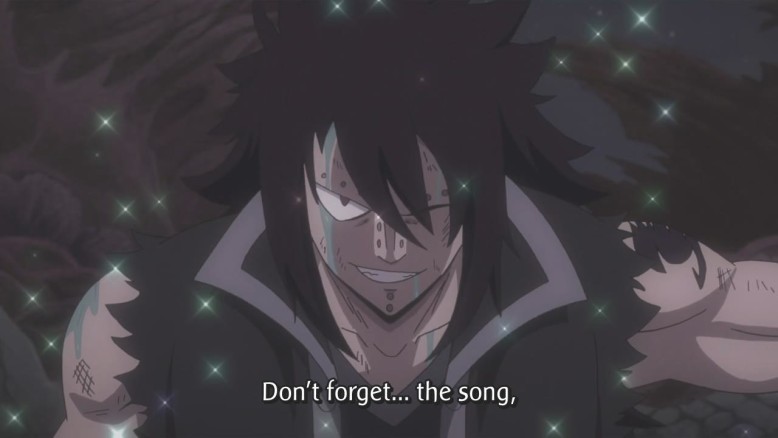 Yeah… I think Gajeel won that one. XD

The truly impressive thing though? The episode didn’t END there. No, we were only half way through! That little detail is so darn important these days in Fairy Tail, where we’re luck to not have things jump around aimlessly. The first half of the episode committed to Gajeel, and it delivered that whole story beautifully. The second half? A certain badass made his triumphant return.

Laxus came back in the nick of time. I’ll admit, I didn’t see that one coming too early. Yes, last week’s Preview did spoil the big surprise, but it was still impressive none the less. At this point, I’d say that Laxus just wins the title of strongest in Fairy Tail, if not the most badass. 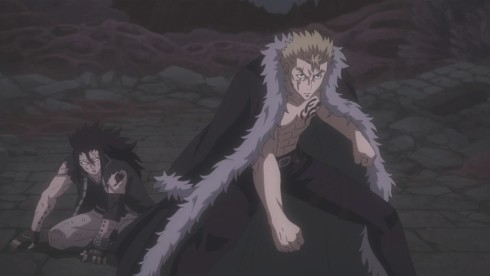 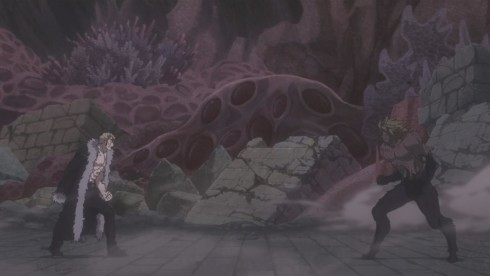 Its almost as if Mashima-sensei went on a “redeemed character epic moments” spree. Gajeel had JUST gotten his most memorable battle yet, and the only real way to follow that up, was of course, via Laxus. I’ve gone on and on about how fascinating of a character Laxus is, and how I’ve grown to like him, so I’ll spare you the details there.

The details I want to highlight though, are about Laxus and what state he was fighting in. As the battle started, Laxus seemed off from the get go. Yes he was there, and with overwhelming power, but you’d expect some kind of retort or jab at Gajeel given that he was still awake. While we did see Laxus say something to Gajeel that we couldn’t hear, it hardly seemed like usual brand of confident jeering. No, Laxus was all business and not only that, was taking a more defensive and reactive approach to his battle with Tempesta. 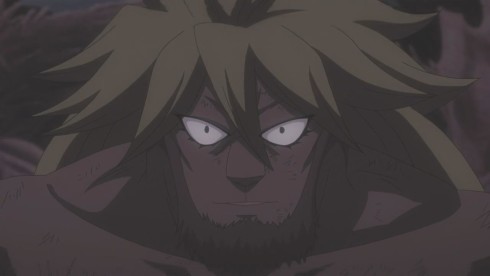 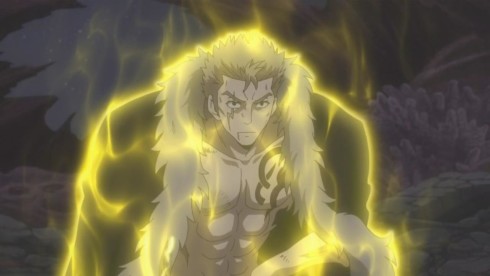 And given that Tempesta isn’t your low level grunt, but more of a end level boss, he noticed that fact pretty quickly. Turns out that Laxus HADN’T made some kind of magic recovery from his last battle with Tempesta. He was still, in fact, still ridden with Anti-Magical particles. The significance of this can not be overstated.

The fact that Laxus is fighting in a state that would mean near death has two potential outcomes. One, he powers through this, and acts all badass, protecting everyone, or be, he ends up really kicking the bucket this time. A part of me really thinks the latter could come to pass. And much like when I felt the same thing with Wendy, I think that’d be a huge loss. 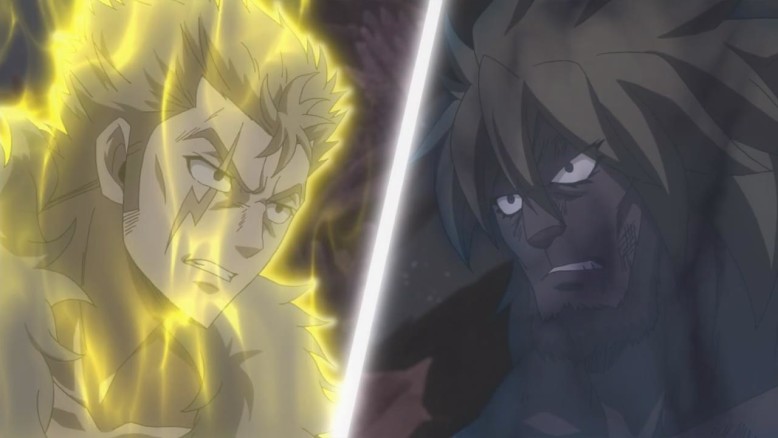 The Bold and the Beautiful?

One of the things I found so darn remarkable during the fight, was how differently Laxus and Tempesta defined winning and losing. To Tempesta, he had lost to Laxus in their prevous battle because Laxus had managed to kill him. Laxus, too felt that he had lost the battle, for an entirely different reason. For Laxus, being unable to protect his friends and comrades from Temepesta’s final gas attack was a devastating defeat. It was one that he came to rectify afterall, pushing himself beyond any reasonable limit. Its just… Amazing to see how far Laxus has come, and what kind of hero he’s become now.

The episode pretty much ended with Laxus’s whole ailment being brought out in the open, and Temepesta using that knowledge to his advantage. With the cat more or less out of the bag, Laxus brought out some energy from God knows where, and prepared to finished it all. At this point, I’d say the only thing pushing Laxus forward is his determined will to protect all his comrades, and I’ll say it again. Its just mesmerizing to see Laxus’s entire reason for being be the protection of those who can’t protect themselves. Hopefully he makes it out of this one alive. 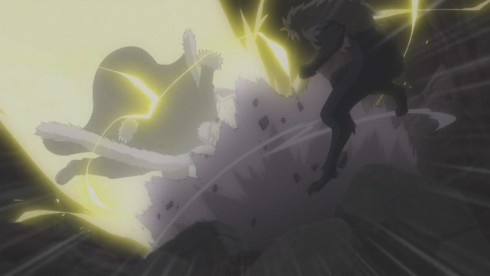 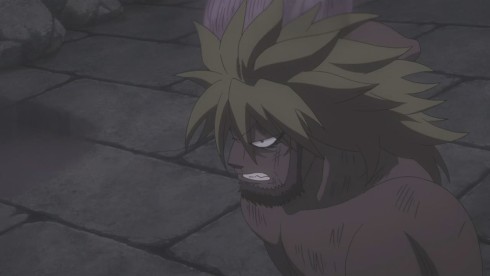 Hopefully next week keeps this one story per half of the episode pattern, because it works so darn well!