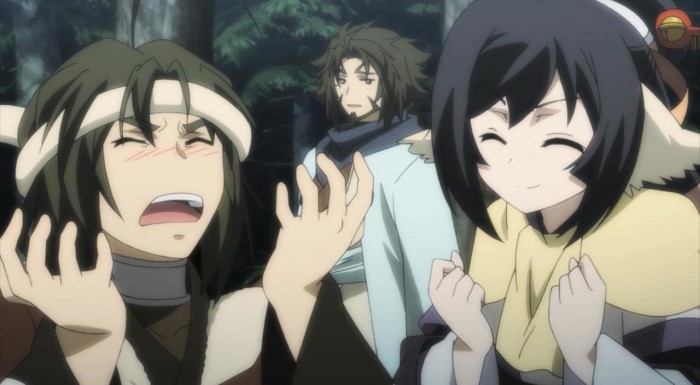 There are times when shows really do manage to meet your expectations and luckily that happened here. I was really hoping the second episode would be able to match the expectations I had after the first episode and that happened here. A chance to jump into basically a fantasy world that is glad to take its time in world building and staying focused on the core characters introduced to this point. We had another episode where the focus stayed pretty well on Kuon and Haku, but this time Ukon and his crew were more involved in what was going on. In the end the episode was basically about them going out on a job and dealing with the threat that emerged during that. But I was entertained from start to finish because Utawarerumono did such a good job turning that setup into an interesting episode. If it can keep this up it will easily be one of the better shows we have going this season. 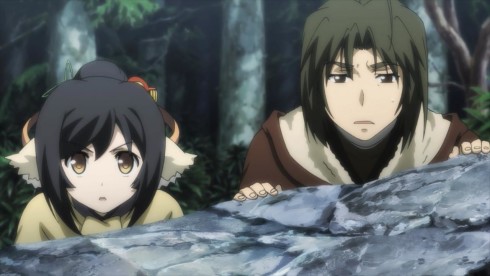 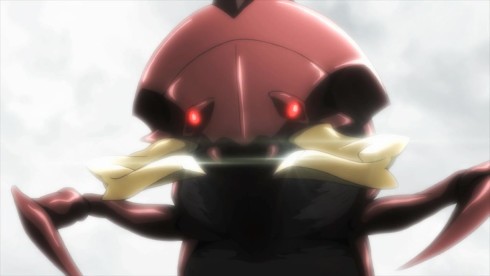 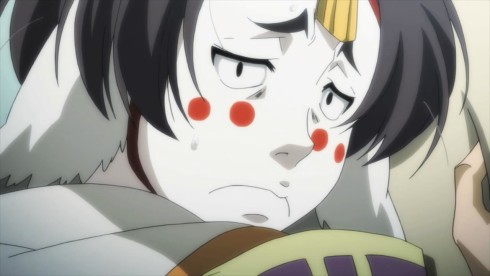 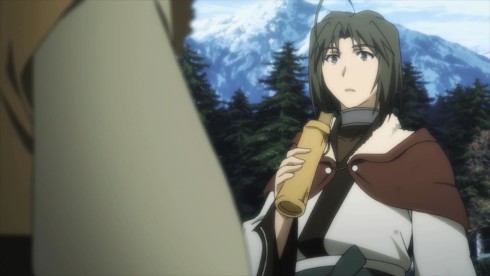 I will say that Ukon has quite the bunch working for him. Though most of them fall into the nameless soldier category….you really can’t ignore Maroro XD. Not sure I like his character that much, but he certainly brings a different personality into the mix compared to everyone else. This weird noble who gets motion sickness, but he’ll still choose that over actually walking in the mountains. Plus that weird ceremony to use his magic is pretty darn odd. I wondered if he might not get killed at some point during this episode with what happened later on.

On that note it was a pretty shocking moment at least to me when the first soldier got killed off like that. I expected things to perhaps not go very smoothly, but it was shocking when the guy just got his head….removed after giving Haku that water. I mean damn….I suppose it isn’t the worst way to go since he probably died before realizing anything happened but that’s rough. I am glad the show is willing to have that kind of thing happen since it does raise the seriousness of events up a level. I mean they do censor it to a degree, but you still get the complete understanding of what just happened there without words. A guy is there and then…he’s dead while spilling blood all over the place. 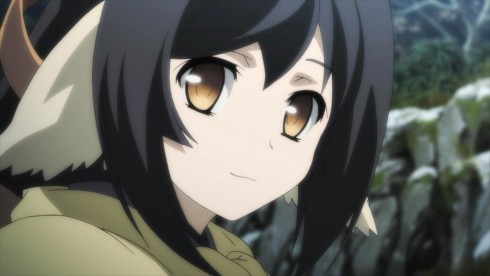 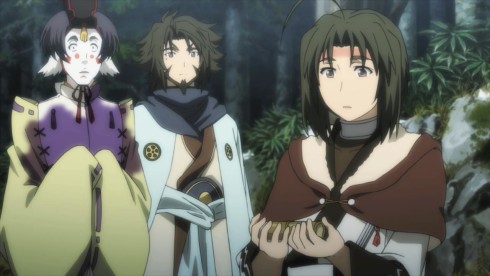 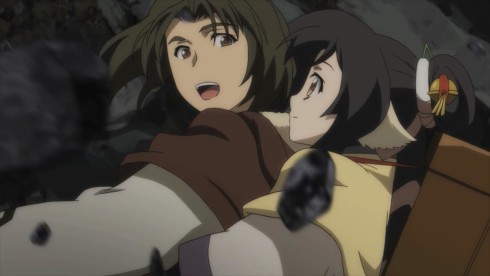 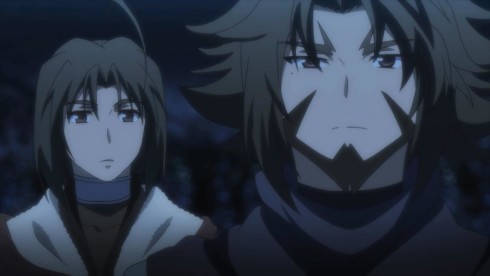 I have to say I really do enjoy the main cast so far with Ukon added in. Haku and Kuon are still really likable characters. I think the balance with those two is stronger than the original game/series. Haku isn’t perfect by any stretch, he is hardly motivated to go beyond what he has to do and isn’t a great fighter. But, the guy is extremely smart and can problem solve very quickly. That is shown clearly enough with his insanely good mental math and figuring out the plan needed to stop the boro-gigiri.

While Kuon is maybe not the best on the math front, she is physically strong (great save there at the end catching Haku) and she’s decisive. Once she knows what Haku is planning she runs off to get the job done. Kuon isn’t afraid of taking risks and putting herself on the line. She’s also just a lot of fun. Still able to have some fun in tricky situations and keep Haku in line when he’d rather slip away with the injured XD. Her decision to give that metal fan to Haku having particular meaning for those who enjoyed the first series.

Ukon got more of a chance to stand out in this one and he did a nice job of that. He’s pretty darn capable as a fighter showing some impressive moves and able to handle himself in tight spots. Despite the danger of the situation where he stepped in to protect Maroro from the boro-gigiri he didn’t flinch and managed to stay calm even as those jaws were cutting into his arms. He has a pretty fun personality to add to the mix of this show. But he’s also pretty level-headed and did pay respects to the man he lost this episode in his own way. Did his best to protect those who work for him and said his goodbyes calmly. 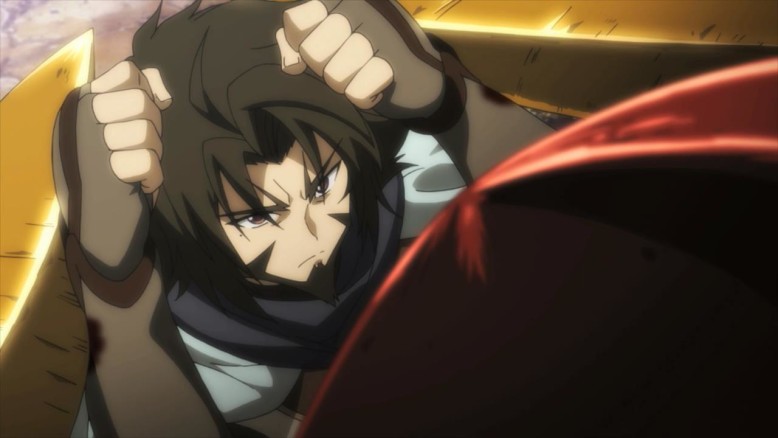 Forget the sword, these arms are solid

The showdown with the gigiri and the boro-gigiri was pretty well done and kept my attention throughout. Those things are pretty darn creepy and dangerous, not something easily dealt with. In the end they had to make use of the curse in order to wipe the bigger one out. They just didn’t have the power to handle that level of threat on their own, instead using another threat was the best move. They could handle the smaller ones with careful planning and the skill they had, but that boro-gigiri just blew all the plans they had to hell with its mere presence.

I thought it was a good plan that Haku came up with and they managed to pull it off nicely. Had to run almost constantly just to keep the attention of the boro-gigiri while waiting for Kuon to do her part. Can’t say that was a fun job for anyone since one false step could have gotten them killed by either one of those threats. Heck Maroro nearly got them killed when he was prematurely celebrating the potential death of the boro-gigiri. If they can keep the action entertaining like that I’m going to enjoy seeing where things go in the future. 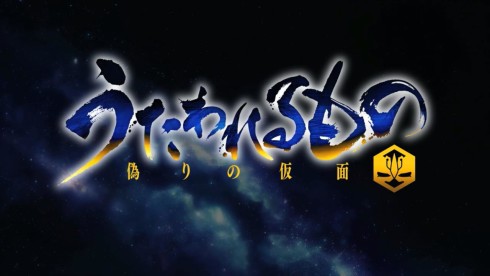 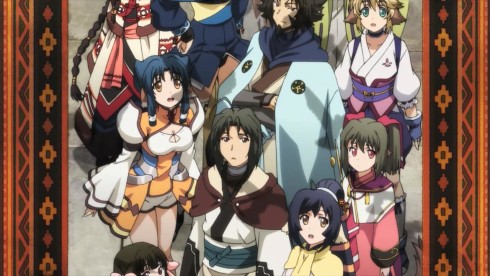 This might be the OP I’ve enjoyed the most so far this season. I really like the musical style and singing as a whole. It really sounds nice to my ears and builds up nicely through the OP so you can get energized as the cast and potential enemies are being shown off throughout. I think the visuals give just enough hints about what is going on without giving it all away. I’m still not overly sure where the plot is going to go for this series which is a fun aspect of it. I can just enjoy the energy and visuals without feeling spoiled. It’s safe to say Kuon and Haku will be at the core of events and will be sticking together, but a lot of specifics are unknown for the moment. A nicely done OP. 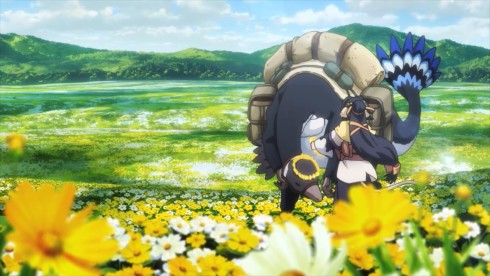 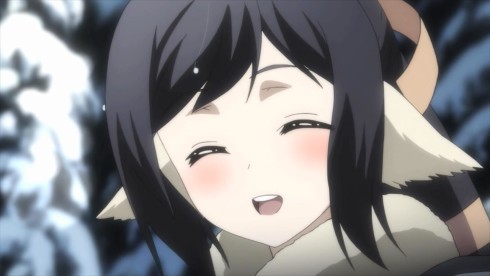 I’m always a fan of EDs that are pretty slow and relaxing. It works to calm things down after a busy episode like this one. It’s a pretty simple ED with a lot of panning over still images of scenery and eventually finding Kuon in that image XD. I suppose you could consider it a showing of the adventures she has had and will have going forward with Haku. Besides hard to dislike an ED that ends with Kuon smiling so happily. The song itself is soft and I quite liked it. It adds to the atmosphere that the visuals are showing of very lovely scenery. Maybe not the best ED this season, but it is a strong one. 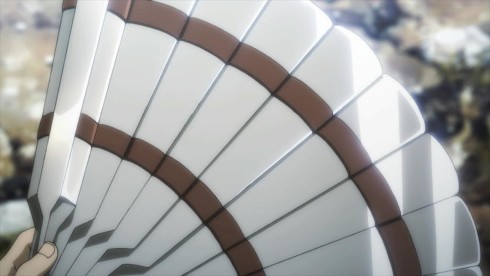 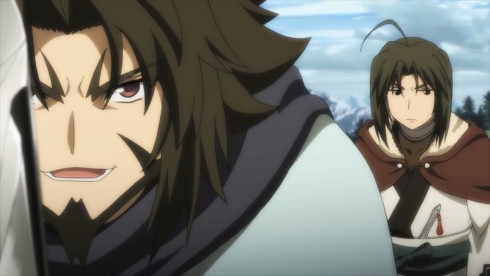 In the end can say for certain I’ll be sticking with Utawarerumono until the end. This show just gives me a lot to talk about and I just enjoy watching it. One of the better shows this season so far in my mind and I hope it will continue being that going forward. I’m looking forward to both watching and talking about the adventures Haku and Kuon have. We’ll see what next week brings as the cast makes their way to the capital. A place that Kuon at least thinks Haku will be able to use his brains to make a nice living for himself.
Score: A-