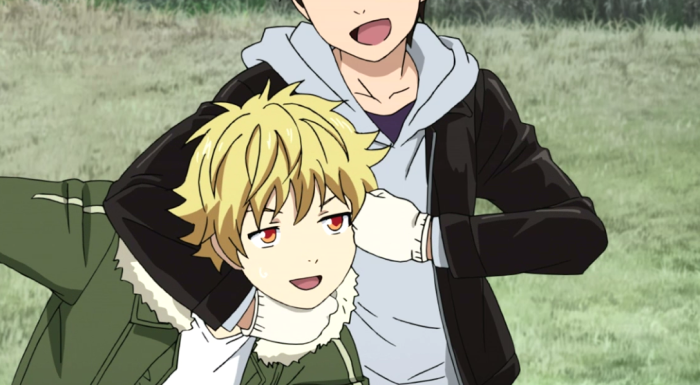 It’s another strong (albeit painful) outing for Noragami this week, as various relationships are strengthened, frayed, or shattered altogether, characters confront the tenuous bonds of memory, and a particularly nasty antagonist starts to set his plans into motion.

Oh, and speaking of that antagonist—well, I pretty much called it last week, but as soon as he started mustache-twirling I realized I story-predicted myself into a predicament. So to clarify something important: Yes, I did start reading the Noragami manga, but I stopped at the end of the Yukine arc, meaning that everything happening in Aragoto is new to me, too. So you don’t need to worry about me giving away any plot points. (And if you have read this part of the manga, no spoilers in the comments section either, please!) 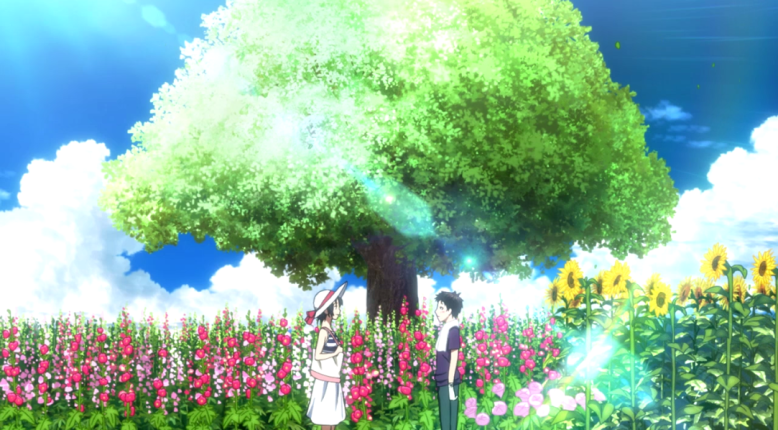 But first, a moment of appreciation for BONES color palettes, because *drools*

That antagonist takes center stage in the second half of the episode, but the first is about Yukine and his new friend Suzuha, talented horticulturist and neglected Regalia. Suzuha’s situation is a quietly sad one: He has freedom and plenty of resources to pursue his passion (gardening) thanks to Bishamon’s high status and general kindness, but the sheer number of Regalia in her retinue means that many of them are rarely called upon and barely interact with her. In some ways he’s as lonely as Yukine, which is part of the reason the two grow so close so quickly.

Suzuha also serves as a difficult reminder of the nature of gods and Regalia when he recalls the fleeting friendship-turned-romance (judging by that umbrella carving) he had with a girl named Tomoko, who could see him but never remember him from one year to the next. Eventually she vanished from his life, but he still clings to her memory and the cherry tree they promised to nurse back to health together. Noragami tells their story in a few key scenes, making it glow with color and then ache with shadow, simultaneously beautiful and tragic in its transience. If you want to know what the Japanese concept of mono-no-aware feels like, it’s pretty much that. 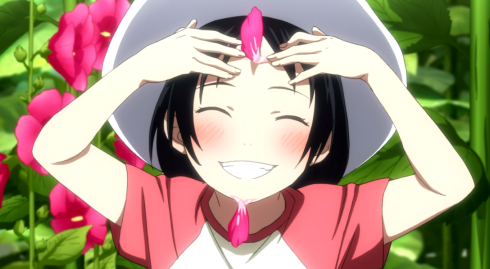 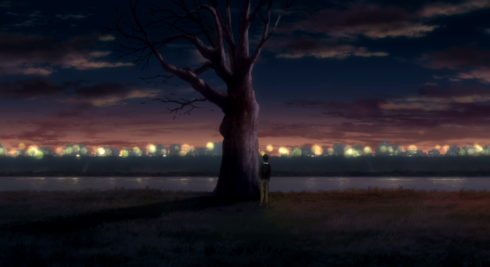 For Yukine, it brings to mind his own relationship with Hiyori, and forces him to confront the very real possibility that she will not only grow up and away from him, but may end up forgetting him altogether. He and Yato are ageless and essentially eternal, while Hiyori (despite her cat-tailed condition) is very much a regular human, and a kid at that, with all the rapid change and impermanence that comes with it. So many Shinto/Buddhist tales come back to this idea, and it’s this undercurrent of sorrow that has always formed the emotional backbone of Noragami, and makes the increasing closeness of its characters all the more important because we know it can’t last forever.

These moments with Yukine this week also do wonders for his character. He was never poorly written by any means—his motivations and frustrations in the first season were understandable, even realistic—but he was more likely to provoke facepalms and groans than sympathy for an awful lot of it. Now that he’s letting himself grow close to others, though, he’s revealing himself to be a sweet, warmhearted kid in desperate need of companionship and approval. Or, to put it in terms of pure, fandom id, HE IS MY PRECIOUS CHILD NOW AND I WILL PROTECT HIM. 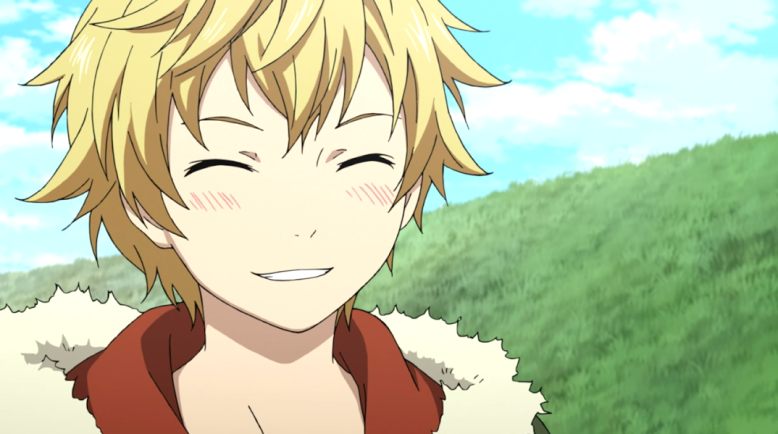 Kugaha has threatened this smile. He must be destroyed.

Our peaceful melancholy is quickly and stunningly disrupted thanks to Kugaha, who sets a whole lot of plans into motion this week with the help of his partner, Nora the Wandering Regalia. Kugaha is the most dangerous of antagonists, attacking his opponents psychologically and emotionally long before he goes after them physically. He digs into people’s insecurities, creating doubt in both themselves and others and driving subtle but significant wedges into trusted relationships.

Worse still, he seems to take a kind of perverse pleasure in it. His psychological assault on Suzuha is not only vicious, but serves very little purpose since the wolves almost immediately attack and kill him (a scene so sudden and brutal I actually shouted “WHAT?!” at my tablet screen). His goal is to cause Bishamon as much pain as possible, and driving Suzuha into despair shortly before his death only increases the emotional turmoil and “stings” Bishamon feels in that moment. 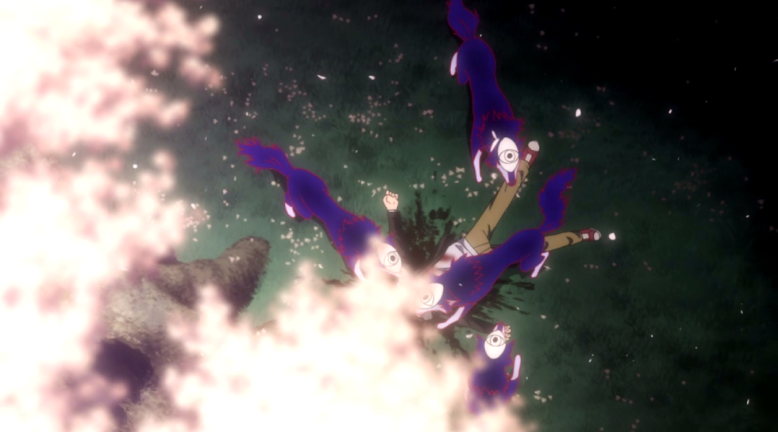 In addition to undermining Kazuma’s authority and causing everyone in the BishaHome to doubt his judgment (including Kazuma himself), Kugaha even takes some shots at Yato, reminding him that his existence relies on humans believing in him and that his current strength in particular comes almost entirely from his connection to Hiyori. While I wouldn’t be at all surprised if Kugaha’s motivations are a lot more complex than just “I are evil, bwahahaha,” he sure is proving himself to be one rat bastard at the moment. 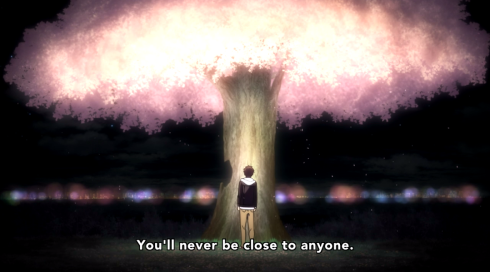 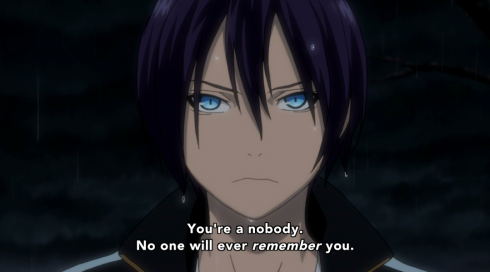 This whole episode (as well as much of Noragami itself) is built on the connection between gods and their Regalia: How they depend on one another, how they serve one another, and a central issue of what an ideal relationship looks like. We’re seeing some serious flaws in Bishamon’s benevolent system, as the sheer size of her “family” not only puts an enormous spiritual strain on her, but can lead to neglected or discontent Regalia, which can in turn lead to more pain for Bishamon herself. While her heart is in the right place and most of her Regalia have a lot of affection for her (Suzuha certainly did), there is a question here of whether her foster home truly “saves” the wandering spirits she finds, or if it’s just a slow decay instead of a speedy one.

Then on the flip side of, say, Suzuha’s relationship to Bishamon, we have Yukine’s relationship to Yato: A single Regalia working with a single god. While they certainly had their growing pains, the two are developing a trusting, familial bond now, in large part because they’ve gotten better at empathizing and communicating with one another. Yukine opens himself up and doesn’t try to push Yato away, and Yato tries to be understanding of Yukine’s personal struggles. It’s huge for Yukine to worry about Yato in the midst of his own sadness, and it’s equally huge for Yato to encourage Yukine to express that sadness, working through it rather than letting it boil. 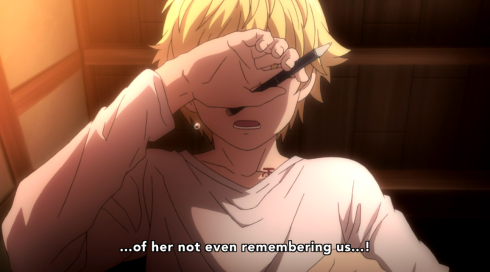 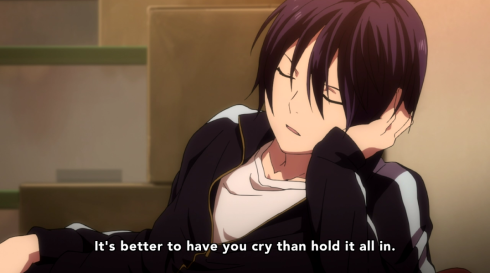 There’s a straightforwardness to their relationship that simply doesn’t exist between Bishamon and her Regalia, even Kazuma, who are so worried about causing her blight that they bottle up their emotions and hide their problems from her. It all comes from a place of affection and concern, yes, but it’s the chink in the armor that Kugaha is able to so expertly exploit. If they don’t start being more open with each other, this family is going to fall apart, taking one of the Seven Lucky Gods with them.