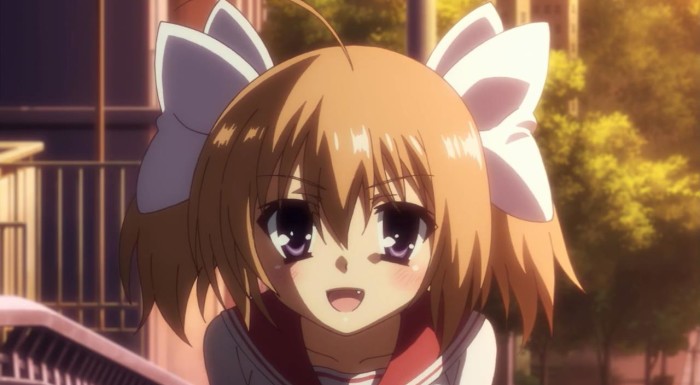 Well I will say it is nice to have Hidan no Aria back in anime form. It may not be a second season, but I’ll take it. In some ways this might be a much better show for the sake of the titled character Aria. Rather than focusing on her tsundere elements a lot, it showed her good qualities a lot more. A lot of people might have turned down Akari without a second thought. Seeing this lowest of low ranked butei and figuring there is no reason to waste their time. You could debate on the test she put forward, but that she does give everyone who asks a shot does say something positive. It made for an interesting episode getting to meet the new cast and seeing the old one in the background, but still active in their own way.

The place to start with this episode is the main character Akari. She starts out looking like one of those unskilled, but hard working types. That may be part of her, but I can understand Aria thinking something is a bit off and worth looking into. A fair reason to praise her is her effort level when motivated. It’s safe to assume that the majority of butei that wanted to become Aria’s Amica, probably gave up rather quickly into the test. The average and maybe somewhat skilled could probably see the gap in abilities between them and decided at some point it just wasn’t worth continuing. Now that isn’t necessarily a negative thing. Dipping into a modern comparison, the police do pull back from a chase when it is too dangerous. Sometimes it is better to be safe. But, that doesn’t mean those people are suited to be Aria’s Amica. Aria is someone who is very focused on never letting her target get away, that extremely high catch rate reflecting this. I think for Aria, someone who can be so darn stubborn is someone worth noticing. 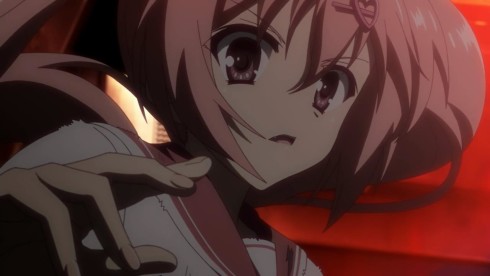 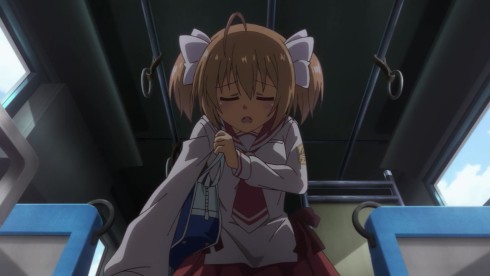 Maybe the most interesting thing with Akari is that she may not be a standard person. The HnA (Hidan no Aria) universe does have a lot of characters with special abilities and skills. Famous historical figures actually are traceable in this universe to descendants who retain special skills. Anyone who saw the original series knows about Aria’s heritage. There are some amazing abilities out there. So it is very possible that Akari does have a special skill that even she doesn’t know about. It kind of felt like Snatch ability for Nanatsu no Taizai’s Ban. Things that Akari wanted just seemed to somehow…pop into her hands. Not sure if it is a special skill or not, but it is something interesting. Not easy for someone of that rank to pull a steal on Aria like that.

In the end a lot of this episode was focused on Aria and her inner circle. She had a pretty sorry test as we could see, but when it came to trying to become basically the protege of someone she really admires she pushed herself harder. She took a lot of risks in the name of not giving up and thus not failing. Jumping onto the train literally and then pushing Aria out of the way of the car. The fact that she took almost no damage from that is also noteworthy, that’s some insane durability. 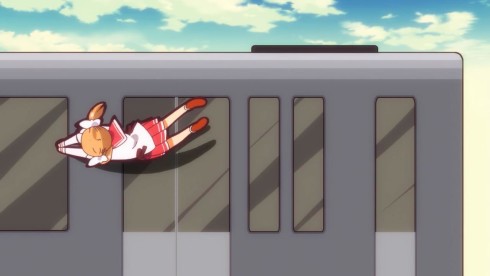 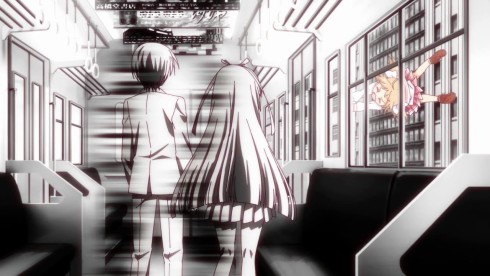 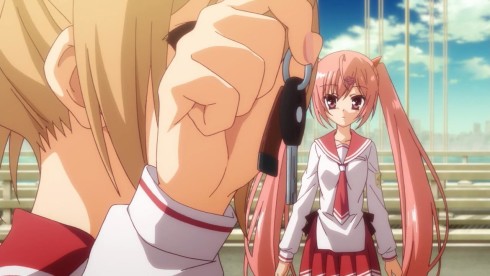 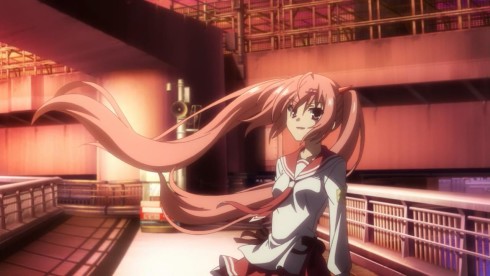 Of course Aria was a key figure in all this and I did like her behavior in this one. She showed a few elements of her tsundere tendencies, but didn’t overdo it. In fact she was actually a pretty good teacher throughout that test. She didn’t pull a lot of punches on Akari and gave her good advice throughout. For Butei crimes can happen at any time and you have to be ready to go, thus Akari needed to be able to take advantage of a chance that came unexpectedly. Aria also gave nice advice about Akari dropping the whole “impossible” term from her speech. It doesn’t help you get things done and really can limit yourself. If you just shrug off difficult things as impossible you are making it so much harder.

In the end Aria was willing to compromise, setting Akari up as a Amica candidate rather than an actual one. She did get the gun and actually surprise Aria, even if she couldn’t keep it. So she’ll give her chances to actually make it happen for real. She also made sure to look into things a bit in order to figure this girl out a little. A bit of research can really go a long way.

I’m glad for Akari in making something that she basically dreamed for happen. Especially when her friends weren’t exactly overly supportive of the idea. In fact Shino seemed…rather off about the whole thing. Seemed like she’d rather keep Akari from achieving that dream and have a bit more personal possession over her friend since she’d be an underachiever that would need that support. 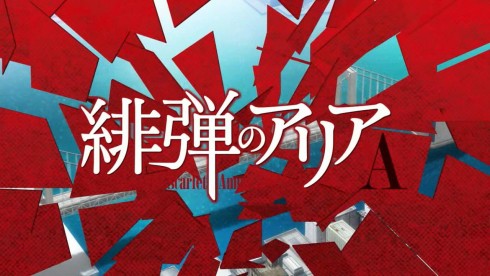 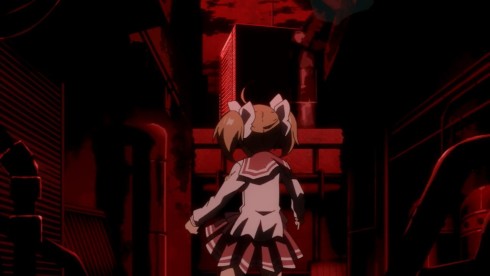 The OP does give you the feeling that there will be a fair share of action in this show. Though that probably should be expected in a show with students being trained as butei. The song had some solid energy to it. It wasn’t the most amazing or standout song ever, but it did the job. Some interesting split with darker colours and brighter ones. Does give the feeling that this show will have some difficult moments, but also some fun times along the way. Not a bad OP. Maybe not a very memorable one, but it was ok. 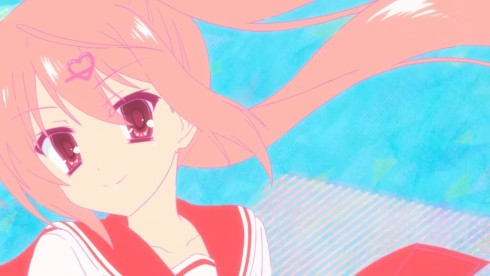 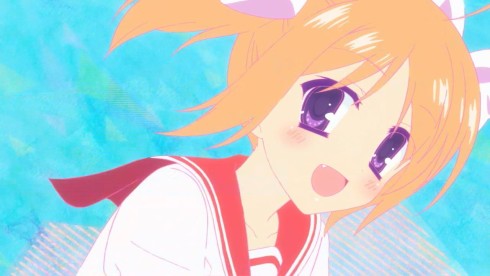 The ED definitely has a different feel from the OP. Seems like a fun little song and way to end an episode. Some softer colours, though still a pretty light and colourful ending. I mean Akari and Aria riding on paper airplanes says it all. It was a positive way to end the episode. The song was nice and cheerful. It gives me some hope that things will go nicely for Akari in her hope to get closer to the person she idolizes. Plus I do like it when VAs can sing some of the songs in their shows. In this case they let the VAs for Aria and Akari have that which definitely worked nicely. A nice bit of teamwork XD. 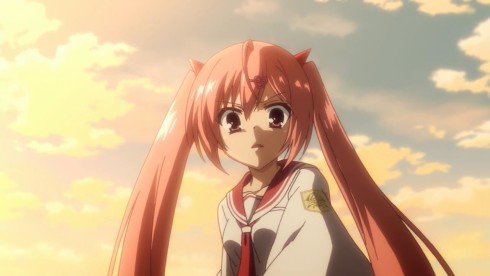 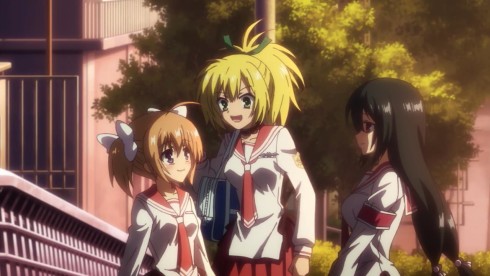 In the end I thought this was a very solid starting episode. There was some odd moments like when they pulled back a bit too far on the conversations (probably to save some animation), but as a whole I enjoyed it. Akari is a fun lead character and maybe dealing with a kouhai like her will bring out the best out of Aria. Aria has a lot of good qualities, but when she is the female lead in a harem-like situation she kind of loses that shine a bit. I’m curious to see how things unfold since it looks like friendships will get complicated next week XD. Again not sure I’ll pick this show up to blog full time, but I will definitely be watching it.
Score: B+

in Hidan no Aria AA