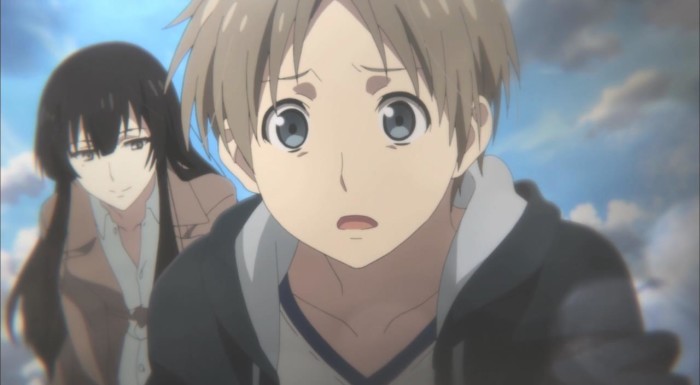 There’s good, there’s great and then there’s intriguing. And intriguing is exactly the word I’d use for Sakurako-san no Ashimoto ni wa Shitai ga Umatteiru (or as crunchyroll adapted the title; Beautiful Bones – Sakurako’s Investigation). And Its pretty fitting that intrigue is the describing word for a show like this, because, it definitely feels like the core subject matter will revolve around solving murders. 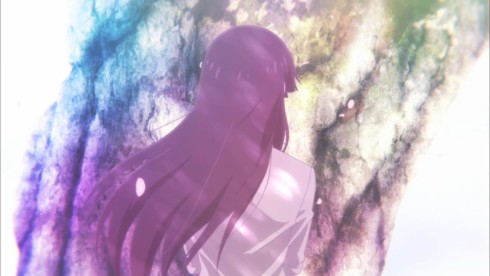 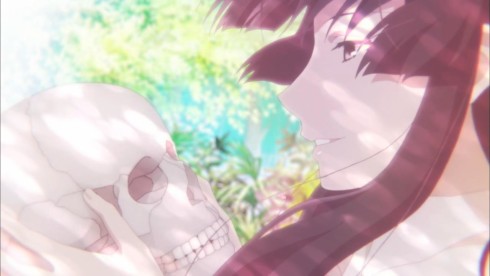 Much like the western TV show BONES, however, the main detective is actually an expert on bones and forensics, and solves the mystery of murders using that expertise. What makes Sakurako-san so darn interesting is the fact that its got a very Japanese, anime vibe to it. This isn’t BONES the anime by any stretch of the imagination, and its no Sherlock Holmes or Detective Conan either. No, Sakurako-san is its own unique thing, and a lot of that is because of its two main leads.

The story for the show actually follows a high school kid named Shoutarou Tatewaki, on his escapades with a beautiful young woman named Sakurako Kujo (hence the show’s title). Sakurako is actually a Osteologist and beyond just that, a real bone Otaku. Sakurako is actually quite the character. She’s got a very Oujou-sama (Rich lady) vibe, but she’s also generally a geek of sorts and lives in her own little world. That combination of Otaku-ism and genius anti-socialism is what makes her unique, but what makes Sakurako likable is how she plays off of Shoutarou. 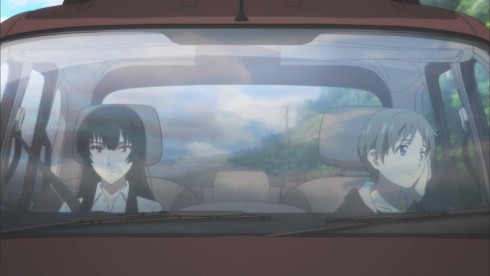 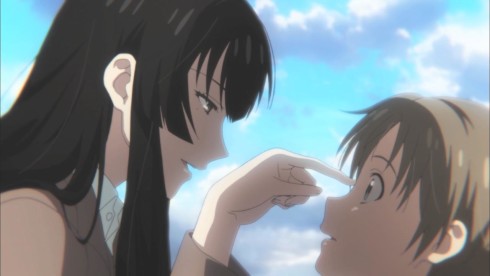 Shotarou and Sakurako have a pretty… unique relationship. To quote Anime Evo’s own Flower, its most closely reminiscent of the relationship that Victorique and Kujo had in the fantastic series GO SICK. Sakurako is the genius, the beautiful woman, and the one who’s a bit out of tune with society and what’s considered normal. Shotarou is the more prim and proper person out of the two of them, but is also fascinated and attracted to Sakurako’s odd charm. She’s different, she’s pretty and there’s an enamorment that Shotarou has with that.

But, as Shotarou is quick to point out in the episode itself, the relationship between the two of them isn’t exactly a romantic one. There’s the fact that Sakurako is actually engaged to someone, not uncommon considering she’s part of a wealthy family and pretty successful and long out of school. Further complicating matters is the fact that Shotarou is in high school and Sakurako is clearly well past her college years, and in her early 20s. 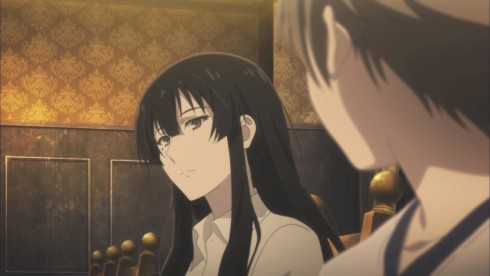 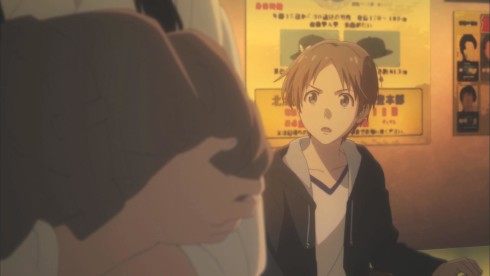 What’s truly remarkable is how odd this pairing really is. Shotarou and Sakurako aren’t officially dating or lovers, but there’s a chemistry and an attraction between the both of them. I think for Sakurako, its more of just being enamored and attached to a young, likeable kid but Shotarou is clearly heavily crushing on her. Its a unique situation, one where it seems like a high school boy is actually interested in an older woman, and actually has a decent shot at it.

Shotarou wants to be treated like an adult, an equal with Sakurako, but she rarely does that. Calling him “shounen” (which is pretty much young boy, or youth) is her preferred way of addressing him after all. There are times, however, where Shotarou is clearly the more sensible and mature of the two, often reigning in Sakurako’s more crazy tendancies and keeping her from getting herself in too much trouble. But then there are other times, when the guy will clearly act a lot more childish and fitting for his age. His excitement over the prospect of being treated to a shrimp dinner, for example, reminds us of the fact that while Shotarou wants very much to be an adult, he’s not quite there yet. 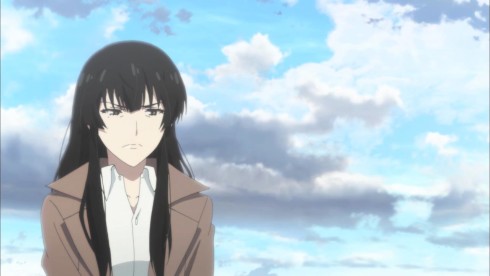 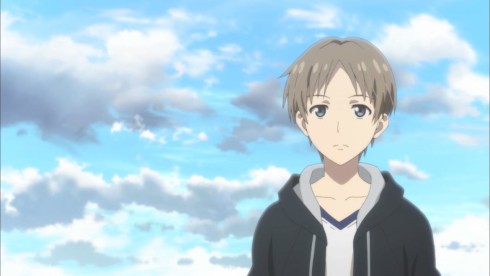 It is fascinating, however, seeing Shotarou and Sakurako interact. They’ll quarrel like a married couple, and care for one another like one as well. There’s a genuine sense of what I’d call a perfect partnership between the two, each giving something that the other clearly needs. I think its that perfect balance of give and take between the two leads, that make them such a joy to watch on screen. Sakurako is just the sort of person that you’d want to drag you around on all kinds of crazy adventures, and Shotarou is just the sort of guy you’d want to be dragging along.

So in terms of lead characters, I’d say the show pretty sells itself pretty darn well. The chemistry and combination between the two is very well established in the first episode, and is the primary focus. Its an important and good thing though, because this is a show that will live and breath through its two main leads. 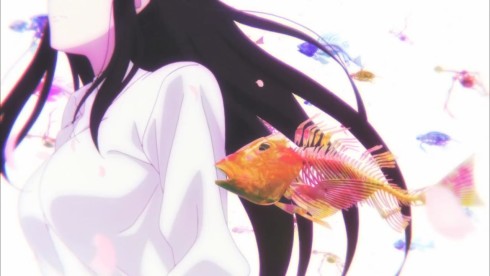 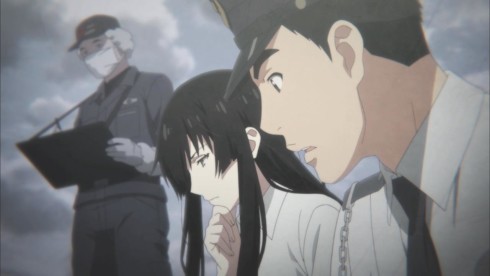 Also worth noting is how beautiful and well animated this show really is. First it was One-Punch Man which was over the top jaw dropping stuff, but Sakurako-san is elegant and beautiful. The animation is reminiscent of Hyouka almost, mostly because of how well that Osaka and Japanese fall atmosphere really is communicated through the landscape and environments in the show.

There’s also an intellectual sense of style to the whole thing, with some neat visual storytelling techniques. Its particularly impressive (if somewhat in the realm of the absurd) when both the audience and the characters are whisked back to an earlier scene, as Sakurako retroactively explains her findings about a couple of bodies. 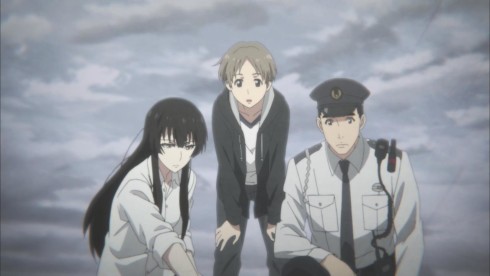 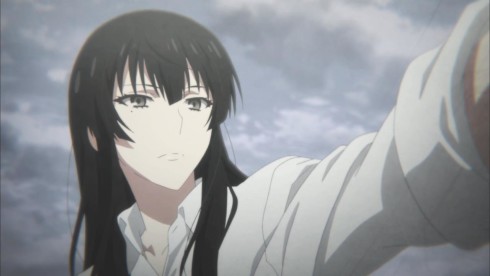 As for the mystery side of things, things are a little bit more vague. Its unclear as to how much of a focus there’ll be on actual murder solving, because the opening episode was less about solving a murder and more about showing just how smart Sakurako really is. In many ways, this was an episode to highlight the characters and their basic place in the world, rather than actual world building or a deep mystery. How the show chooses to go forward in terms of mysteries and having its two leads solve said mysteries, is going to be a big part of the show’s eventual success or failure.

For now though, I’d say I’m very very intrigued and interested by what I saw. This is a calm, thoughtful and elegant series with a very entertaining pair of lead characters. If nothing else, I’m at least convined of the fact that this show will be entertaining. Will it become anything more than that though? That is the real mystery. In any case, I’m at least eager to find out some answers, so I’d say Sakurako-san accomplished its mission with the first episode.