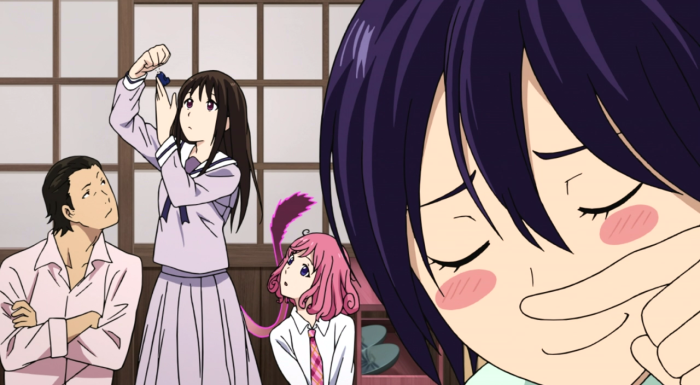 The Noragang is back after nearly two years away, but it’s like they never left. The first season was one of those that snuck up on, sucking me into the world and characters a little more each week, and despite a somewhat rocky anime-original final arc it ended up being one of my favorite shows of 2014. I started snagging the manga once Kodansha brought it stateside, so needless to say I was pretty stoked when BONES announced a second season in the works. (Oh, and if you haven’t  seen the first season yet, it’s available on Funimation, Hulu, and Netflix in various sub/dub formats, so you have plenty of binge-watching options.)

Noragami is basically my ideal action series: Character-driven storytelling, a mixed-gender cast who are all sympathetic and badass to varying degrees, and a tone that shifts seamlessly between comedic romp, grim supernatural thriller, and personal drama. The very occasional fanservice is playful (I confess to smiling at the panty shots), the minimal nudity tasteful, and the fight sequences practically bleed cool thanks to BONES’s typically sharp-looking animation, Director Tamura Kotaro‘s active camera, and Iwasaki Taku‘s hip-hop-inspired score. 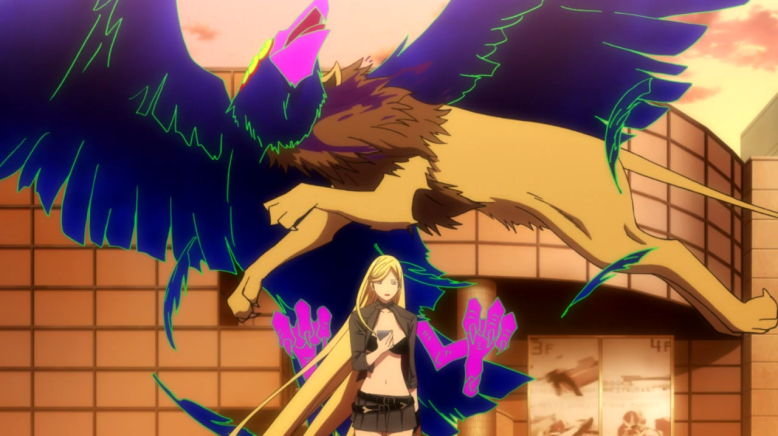 And if a lion side-tackling a glowing demon bird while his boss lady chills in front of him doesn’t just make you downright giddy, then anime may not be the medium for you.

And so far, I am pleased to say that Season 2 looks to be more of the same. The first half of this episode was mostly about settling the audience back into the story, world, and characters, as Yato first takes on one of his Delivery God gigs and gets tangled with a Phantom in the process, then spends an afternoon hanging out at Kofuku’s place. A lot of it serves as a refresher course for plot points like Hiyori’s soul-slipping condition, the creation of Borderlines, and how spirits can become either Phantoms or Regalia, but it’s organically integrated into the dialogue so it mostly feels like a natural part of the story rather than an InfoDump (and seeing as how I watched this one right after the laughably bad exposition-fest that was Heavy Object, it was downright masterful).

The fight with the Mirror Phantom looks great (and mad props to character designer Kawamoto Toshihiro, whose Phantoms are that pitch-perfect blend of mundane and grotesque that makes them genuinely creepy), and Yato’s plastic cat charm antics had me rolling, but mostly I was just glad to be back with these characters. They’re still very much the same people: Yato with his visions of grandeur and turn-on-a-dime shifts from dangerous kami to goofball Delivery God; Yukine with his eagerness to please and tendency to sulk; and of course the always-awesome Hiyori, chipper and straightforward, whose response to a nightmare bunny is to roundhouse kick it in the face. 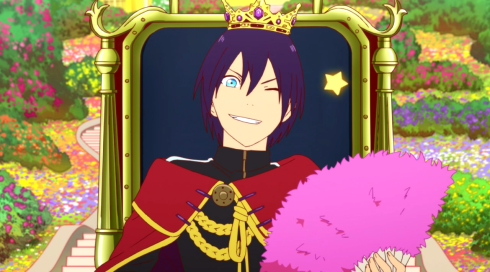 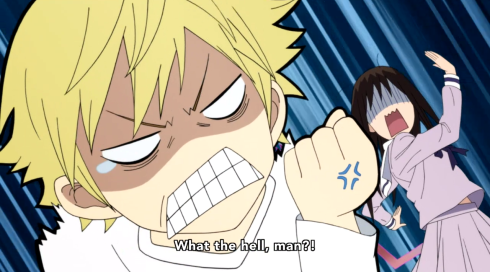 And yet while things are still much the same, there are some telling differences that show how far our characters came during last season’s trials. Despite both Yukine and Hiyori’s (mostly minor) complaints about Yato, there’s a bond of trust and camaraderie between these three that wasn’t always there in the past. Yato and Yukine are developing an almost parental bond (Yato teaching him to hold the baby was quite sweet), and Hiyori’s beginning to see Yukine not as some helpless child but a young adult like herself.

There’s also an easygoing trust between these three that carries through both their battles and squabbles, as they play off each other and work together to save lives and defeat enemies. Given the impending conflict with Bishamon, I suspect that growing bond is going to be a vital one. 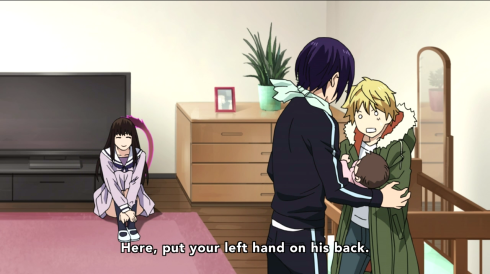 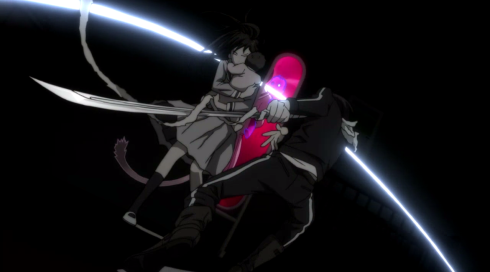 Which brings us to the bulk of the other half of this episode: Bishamon and her Home for Intangible Friends! We met this scantily clad warrior god and her retinue of Regalia last season (Kazuma in particular played a vital role), but all we knew was that she wanted Yato dead for killing one(?) of her Regalia. She came across as suitably warlike and harsh back then, but here we soon see there’s a lot more to her than just kicking ass and taking names.

Bishamon is incredibly sympathetic to the plight of the spirits unable to cross over to the Far Shore. She not only hunts down and kills any Phantoms trying to devour these spirits, but also cuts out (literally) (and, oof, painfully) any contamination and grants the spirits posthumous names. This turns them into Regalia, giving them both protection from the hungry Phantoms as well as – and most importantly – “a place to belong.” Since these “torn spirits” can never be fully functioning members of her retinue, this has nothing to do with bolstering her firepower; she just genuinely wants to keep these wandering souls safe. 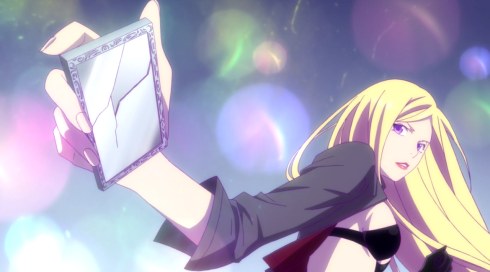 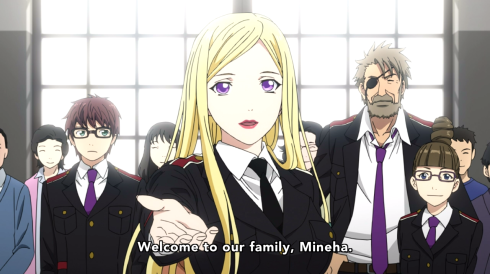 This sheds some interesting light on her past conflict with Yato. First, because it shows why him killing even one of her Regalia would lead to a centuries-long grudge, but also because the flashbacks suggest there may have been more to this “killing” than meets the eye. In Bishamon’s nightmare, she’s covered in the same stains Yato was when Yukine kept “stinging” him, meaning at least one of her Regalia had committed enough sins to pollute her spirit pretty badly. Could Yato have killed that (those?) Regalia in order to save her? Given Yukine’s new friendship with one of Bishamon’s Regalia, Kugaha’s spying, and Bishamon’s own renewed efforts to find Yato and bring him to justice, I have a feeling we’re going to learn the answer to that question real soon. 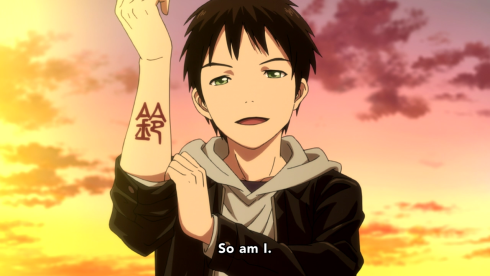 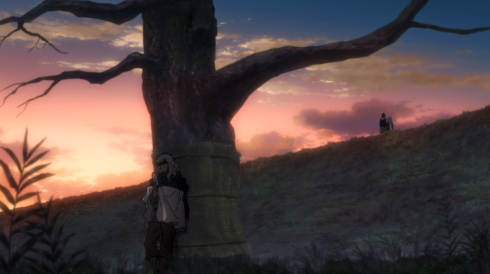