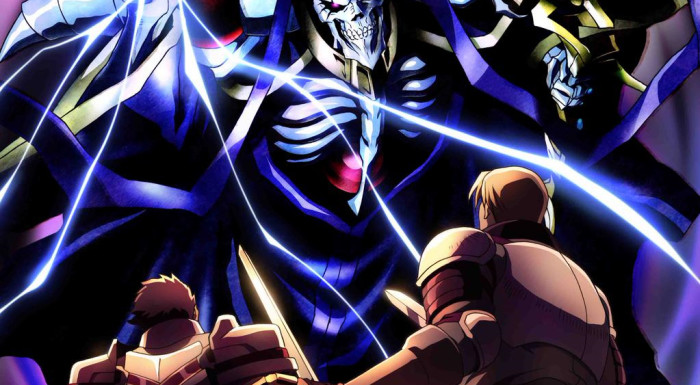 There are some shows that are certainly difficult to break down into a simple score and for me Overlord is one of those series. It had one of those premises that quickly drew me in and made me curious about how the show might turn out going forward. There is an increasingly growing field of stories focusing on people getting trapped in games or something of that nature. That makes sense since MMOs and video games are such a big part of our lives now in comparison to a few decades ago. This series does take an unique path though in that the main character isn’t in a normal body and trapped in that world. Which I mean that he isn’t just trapped as a human avatar, but rather an Undead Lich. That change actually adds quite a bit to the series and makes things all the more interesting. It is one thing for a person to retain their humanity when they are trapped in a game or taken to another world in a human avatar. It’s another when that kind of thing happens and you aren’t even trapped in a body that resembles the one you had before. How does one react to that, how does one steadily change due to that? Does a person just plain lose themselves since this new body is basically their real body now? That kind of setup really drew me in after the first episode because it raised so many questions and allowed for a story that has a different path than others that have come before. 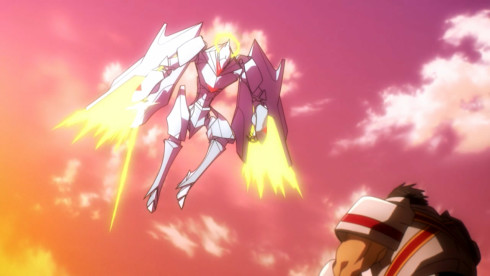 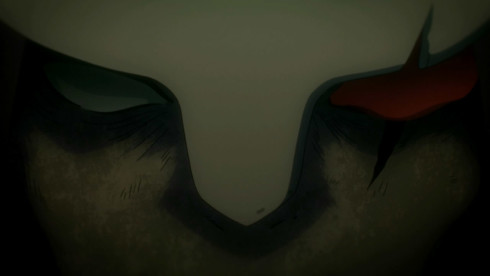 The setting is one that sounds familiar on its surface. The main character is a virtual MMO player who is seeing the last days of the game he sunk so many hours of his life into about to shut down. Unlike some he is actually someone who has a full time job and is paying for his hobby. The game world was called Yggdrasil and he was basically the only member of his guild there to see the end of the game. By that point just about everyone else had left in months-years previously. A very isolated individual was going to spend the last moments of the game in the game. But once a time line for the shut down passed…he suddenly found himself and his guild in an unfamiliar world.

The show differs itself from the pack by cutting away from the standard focus on other players being trapped. While it’s hard to say if no one else was sent to this world, the focus isn’t there. Rather the people the main character Momonga/Ains interacts with the most is the NPC characters from his guild and the people in this world he’s found himself in. In a sense he’s very much a man on an island without anyone who can truly empathize with the situation he’s in. No one to relate to in terms of the troubles he faces in retaining his emotions and humanity. Of course he’s not completely alone since the NPCs from his guild have basically come to life with personalities based on the settings and backstories they were given by Ains and his fellow guildmates (who are not in there with him). But despite their origins they are all very lively characters and it is hard to treat them simply as fake existences. They themselves acknowledge being created but they do not have any real issue with that.

For me the setting is one of the biggest strengths for this series. The very setup of the world and the story is interesting and not something we’ve seen a lot. The focus for the series is the main character carefully adapting to the world he’s found himself and just slowly working through his plan of action. In a sense the show takes its time in doing things and Ains works with the long-term plan in mind in just about anything he does. There is no rush in getting to the end or finding a way back, he’s just taking things one step at a time with almost a cold calculating method. The main character being turned into an undead certainly fits since there is little rush outside his initial attempts to figure out what has happened to him. Sometimes it might feel like the story is moving along very slowly, but the plan that Ains has does make sense from more objective point of view. 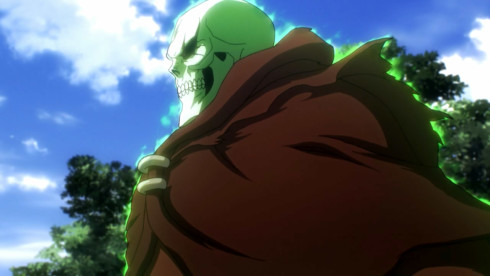 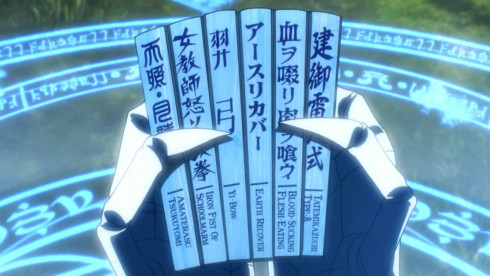 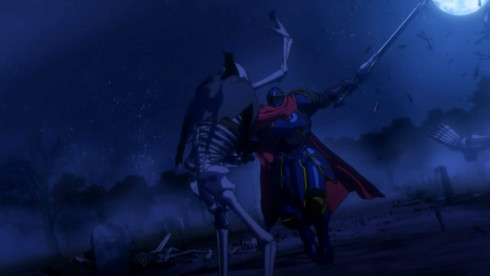 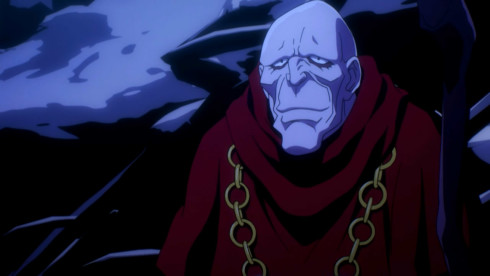 Ains as the main character is a strange mix that honestly I have a hard time deciding whether I like or dislike. The show makes pretty clear that he is almost a god in terms of the world he’s been dropped into. His magic and skills are at an extremely high level in comparison to just about everything else around him. I suppose a main character doesn’t have to be weak, but it does create little tension in the fights he takes part in. You know he’s going to win, there’s almost no way he could lose. The interest then has to come from how he’ll win and what tactics and skills he has had to bring into the mix. And certainly he does make his wins somewhat spectacular and kind of chilling. Because he is in a state that most would relate to an evil last boss, his wins are certainly a mix of amazing and kind of scary. He’s a character that is cold, but also does have a human underneath that exterior. Just one that is limited by the current state he is in. He can’t react as he would as a human because of physical and magical restraints and it is interesting to see him struggle against that.

The rest of the cast creates an interesting mix. You have the Guardians from his guild who were former NPCs and are now very much active and alive. None of them are human and thus you see an interesting disdain of humanity from their point of view. You have the nearly scary love obsessed Albedo who is the leader of the guardians. While she can be somewhat frightening in her obsession over Ains, she also can drift to being a rational leader of the guardians and one that Ains can lean on when needed. Then you have a loli vampire in Shalltear who is basically the rival to Albedo in terms of being interested in the main character. Ironic of course since he is a skeleton, but they are still pretty dangerous in their obsession. Not every guardian has a lot of focus in this series, but they all have their quirks. You have for example twin dark elves who crossdress, both are pretty fun characters with an aggressive and energetic twin and a more reserved one. It is an interesting thing seeing such personality and oddness from creatures you might normally expect to be dangerous monsters. But here they are the main characters. Demons, monsters, vampires, etc. They are all unusual creatures, but they respect and revere the MC as a supreme being and would follow his orders to whatever end.

There are some human side characters, but I can’t say they were all that interesting. Because of the setup, Ains can’t easily interact with normal people though he does at certain points. 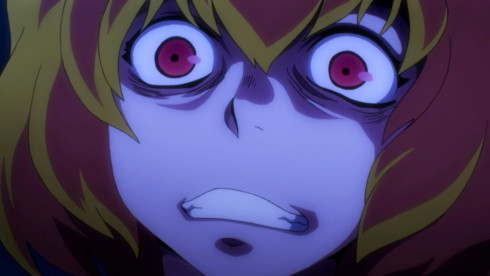 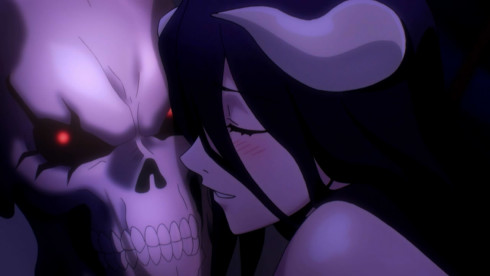 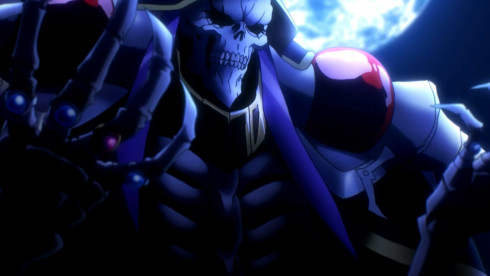 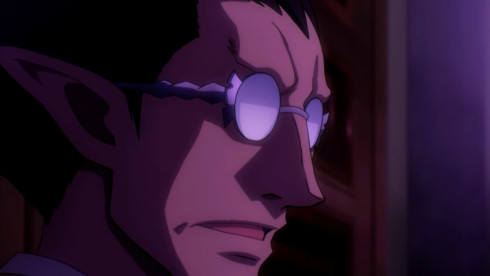 You can say the show is rather slow at times. One specific showdown just felt like it took forever because in a sense…..everyone was a villain and suffered from villain clichés. Both sides took too much time to gloat, or talk up their abilities and it turned what should have been a quick curbstomp into….a very long showdown. The ending to that fight was pretty spectacular, but it sure took its time getting there. And that note is kind of the weakness to the show at times. It just takes such a long time for things to happen. It is careful to set up the world and move things along carefully, but sometimes it feels like it was a bit too careful about it. Ains as the main character is thinking about the long term game, so it is possible for people to get a bit bored by his necessary time being taken to set up that plan. There were some episodes were I was just not that interested in what was going on. Though the show usually came through after a while and brought some amazing scenes that I was really intrigued by.

I will say the last arc did a good job pulling me back into the show and getting me interested in what was going on. It did make it feel like a legitimate threat existed. It felt like the first real danger to Ains and his guild since he had appeared in that world. For that reason I’m glad they ended it the way they did. It was a strong stopping point that resolved the immediate crisis and set up future arcs should the anime get a second season. That’s a pretty successful concluding arc in my mind. I think the show is at its most interesting when the focus is on Ains and the guardians of his guild. You really get into his head and the guardians are such a colourful group that it is easy to have fun watching the antics. 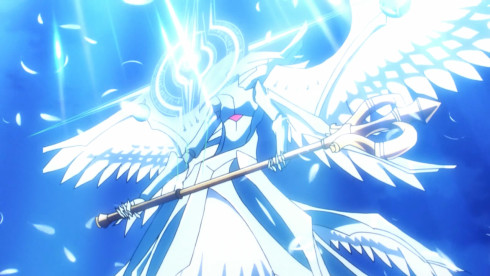 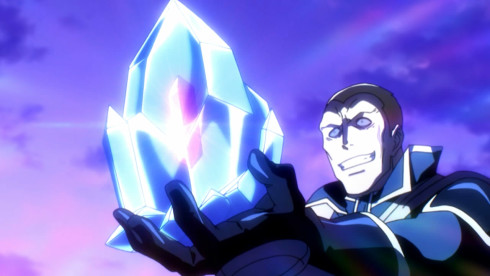 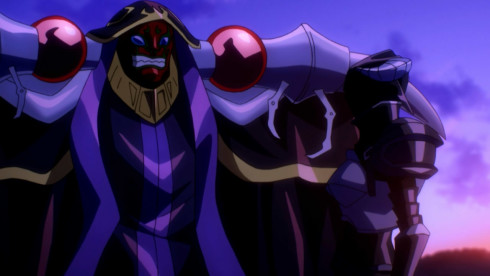 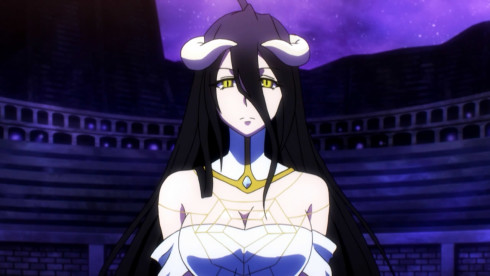 In the end I would say that Overlord was a fun show that added some interesting twists on the standard. It did get my attention just from the setup alone and the series as a whole was pretty enjoyable. The visuals were solid and the last fight was especially entertaining because it was pretty back and forth. It seems like the sales were pretty solid so there is always a chance this could get another season down the road. Whether that happens I don’t know, but at least Overlord ended well. If it continues there is no problem, but if it doesn’t you can still say it told a nice story. Just one that clearly wasn’t completely over yet. It is worth checking out if only for the different setup and lead character. The person under the surface may have been a normal gamer, but because he was stuck in that undead body it created a character that had some uniqueness to him. Maybe not the best show in the summer season, but a good one.