Without a doubt my biggest surprise of the Summer 2015 season was Himouto! Umaru-chan. I had tried to read the manga some time back (perhaps a year or so ago?) and it did not click with me then. However, on hearing it was going to receive an anime adaptation again I thought I would give it a go once again, and am very glad I did. Needless to say, it clicked this time, and I was extremely surprised (and happily delighted!) at how faithful and how effective the adaptation was at engaging me from the get go! Comedy based series are often hard to anticipate whether or no they will work for one, even knowing the source material – either it works for you or it doesn’t; but in this case Himouto! Umaru-chan worked well for me … really well, in fact, and it went on to become one of the four series in the summer season that would receive an “A” rank from me.

As was mentioned in the “First Look” post regarding this series, here is the premise of the series: “The series follows Doma Umaru, a high school girl who lives with her older brother Taihei. At school, Umaru appears to be the ideal student with good looks, top grades, and a lot of talent. Once she gets home, however, she reverts into a layabout who spends her time lying around, playing video games, and constantly depending on her older brother, much to Taihei’s dismay. ” Over the course of the series we are also introduced to a few other characters who play a larger part in the story itself: Umaru’s close friend Ebina Nana (who lives in the apartment underneath Umaru); Umaru’s self-proclaimed academic and athletic rival in high school Tachibana Sylphynford, who is one of Umaru’s classmates; and finally Motoba Kirie, another classmate of Umaru’s who is a petite girl with an intense and intimidating gaze, yet who is actually very shy and has great respect and admiration for her. 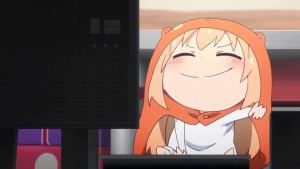 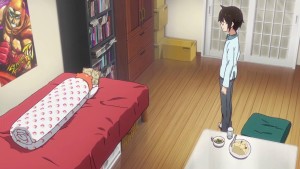 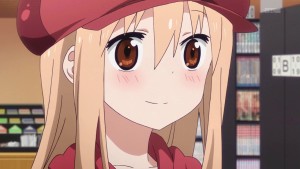 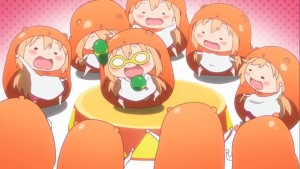 One of the best parts of the series that runs alongside the comedic, episodic narratives is the intertwining background of the characters’ unknowingly knowing one another. On a familial level, not only does Umaru have an older brother in Taihei, but two of Umaru’s closest friends (Sylphin and Kirie) also both have older brothers – brothers who are coincidentally working side by side in the same business. Kirie’s older brother (nicknamed “Bomber”) and one of the supervisor’s at the company the three “onii-chan’s” work at (named Kanau, who has had an unrequited love for Taihei for almost ten years now) actually have been friends with Taihei and each other since high school.

All of these characters are moving in and out of the narrative while rarely running into each other, whether collectively or only bit by bit (though in believable ways) and while mixing up the identity between Umaru-outdoors and Umaru-indoors, is an ongoing theme, and it outright WORKS both story-wise and comedically. This is equally true in the manga … in fact, it was not until just recently (manga chapter 121) that Kirie and Bomber finally discovered that each of them at separate times was visiting Taihei’s apartment, and yet both of them only know of Umaru in “chibi” mode, with Bomber nicknaming her “tanuki” and Kirie continuing with “shisho”. In the final episode of the anime they did show Kirie mentioning to Umaru outdoors that Bomber was her older brother, but at the moment I do not remember if that is anime-original content or no…. 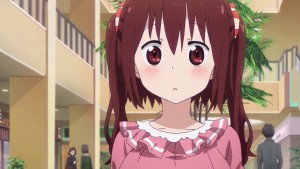 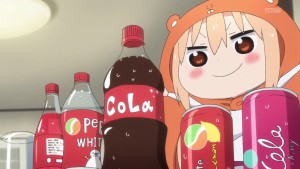 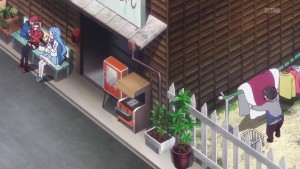 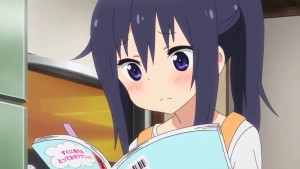 Part of the most interesting aspect about the adaptation for me, though, is something the studio (Doga Kobo) also was able to pull off well in other 4koma adaptations … and that is hinting at the background aspects of the story not spelled out in the episodes (or the manga itself). In this case the subject in question is the family background of Taihei and Umaru, and the main question raised for me is “Why is Umaru staying with Taihei in the first place?” Regarding Umaru moving in with Taihei, the impression I got was that she came to live with Taihei only a little over a year (or less). This episode indicated several years back when Taihei was in high school himself. Somehow I thought he had been already living alone and independent for a few years before the request came for Umaru to be allowed to live with him (though we don’t know where the request itself came from). For all we know there could be relatives involved in this as well.

Various possibilities have been tossed around. One possibility is a divorce, with one child going to each parent (this is my theory at the moment). Taihei went with the mom, and Umaru went with the (wealthy) father, who held her to a strict standard of intellectual, cultural and behavioral standards (remember how well she played the piano?) … possibly after Taihei moved out on his own Umaru eventually joined him since his apartment was near where she was going to high school. Taihei was also a chance for her to unwind in private. Yet another possibility is the father being a diehard worker with no time for his family. I guess it could be possible that if the mother was not also neglected she could have divorced the father, or even could have died young, too … maybe even giving birth to Umaru? (I sincerely hope not.) The mother seems to not be around any more, based on the flashback scenes Taihei had at the end of an early episode. 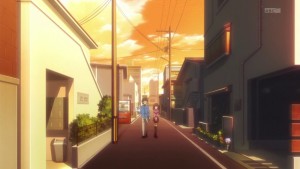 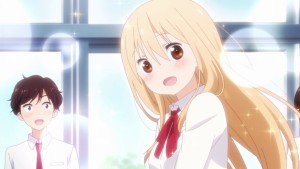 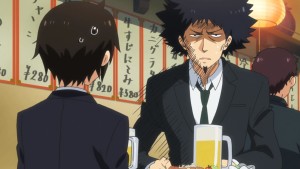 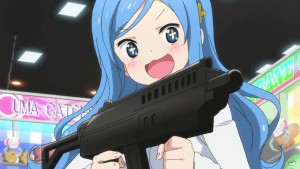 The speculation for the backstory going on is all the more strong in its pull for the fact that the characters in this series are absolutely endearing. When the series began airing and after I finished my first look post on it I also looked at other sites reviewing anime and was quite surprised to see how thoroughly Umaru in particular was … well … trashed in the reviews. On the one hand I can see where they were coming from – in the first episode in particular she does not make a very good show of herself. But on the other hand I feel that if only the reviewers had remained patient with the series and watched a few more episodes they would have seen that the initial impression they had was just that. Umaru, Taihai, Sylphin, Kirie, Ebina, Bomber and the others actually have a lot more to them, things that are hinted at in ways that would be easy to miss.

But more than that, each of them are very distinct individuals and each is incredibly endearing. As we get to know the characters over time we come to see that they are not simple cliches or stereotypes, but are actually lovely souls with weaknesses and strengths, shortcomings and talents. But this perception is one that is slowly woven together over time, stitch by stitch, thread by thread. This gradually unfolding comes across strongly and clearly and deliberately in the manga, but in the anime adaptation we are almost bowled over by the understated, reserved, delicate, almost quiet and easy-to-miss sketches we are given looking into their behavior and memories. These little moments simultaneously endear us to the characters, show that there is a lot more to who they are, yes, but also give vague hints as to why they are the way they are – all in one stroke of the brush. I thought it was extraordinarily effective, and really helped the content of the manga source become much more prominent and jump into the foreground, in a way. 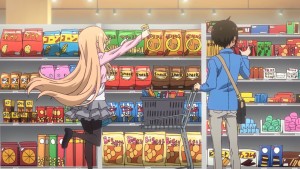 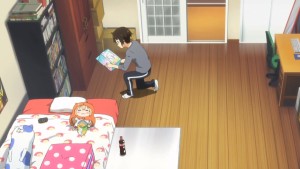 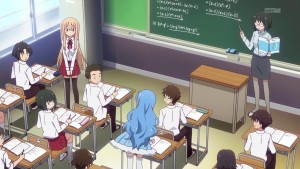 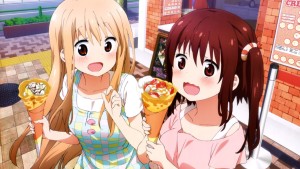 The rest of the anime is steady and consistent, though not spectacular. The visuals have their moments, but the sound track is pretty effective (the background sound of Umaru outdoors blooming in the presence of others or showing up out of her indoor mode made me laugh almost every time I heard it). The OP and the ED are interesting in how they show us the two sides of Umaru (her indoors and outdoors sides), and do so pretty effectively – while the ED is catchy and pleasant the OP is annoying and exactly on the mark of what the behavior of Umaru indoors is like. The VA work is well done, with a special nod going to Sylphin’s seiyuu.

The future of the series itself is another question completely, but I would not be surprised if another season showed up. The manga is quite popular, and the disc sales for the first BD volume have thus far been respectable. I myself would love to see more of this cast of characters, but I must admit I would also love to see more about their backstory unfolded. They have become very dear to me. Thankfully the manga is still going strong, and I (and other followers of the franchise) will be able to continue the story in that medium. Many thanks to the studio for this excellent and surprisingly faithful adaptation … when an adaptation serves to enrich the franchise as a whole it is a good sign for me, and this definitely did so. This series gets an A ranking from me, and as far as I am concerned it deserves far more attention than it got.