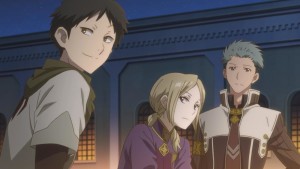 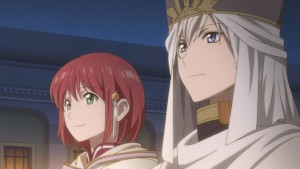 If this were a lesser series then this week’s episode would’ve been the last we’d ever see of this stellar manga adaption. As luck would have it though, there’s still another cour (12 episodes) to look forward to in the winter. That alone makes this ending more sweet than bitter, although I do shudder to think how life will go on for an entire season without Shirayuki and Zen. 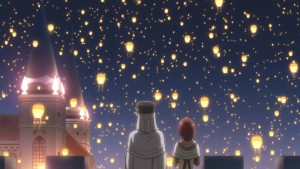 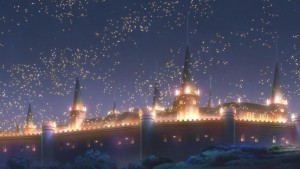 What’s so darn interesting is how much of an “ending” this episode felt like in the traditional sense. If I were unaware of the planned split-cour nature of this show, I’d have largely assumed that this was the ending. In the more contemporary sense its pretty much falling in line with what we see these days. The first part of the story, the first major milestone is over, with a much larger story clearly planned for the manga. I’d have to read the source material to be sure, but given how neat, organic and well developed everything has been uptill this point it feels very much like the story of Akagami no Shirayuki is divided into parts.

In a lesser story even, this would be around close to what we’d get. Zen and Shirayuki both confess their feelings, perhaps even get together, and the story ends, exit stage right. What’s so great about Akagami no Shirayuki-hime is that its fresh and original, both in how it deals with tried and true elements of romance stories but also in what aspects of those stories it covers. Falling in love and asking someone to be with you is only the first step afterall, and actually bringing the romance to fruition and maintaining the relationship is the real challenge. 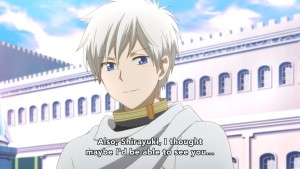 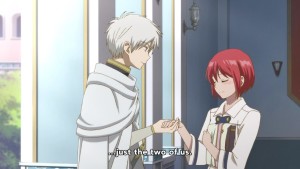 Its unfortunate how little we see of that second aspect in popular media, but manga and anime have always had a leg up in that regard. We’ve gotten a few series of note here and there that have focused on the actual relationship aspects post confession. In Zen and Shirayuki’s unique case, however, its also going to be about how they bring legitimacy and acceptance to something that they’ve already bought into.

The challenge of Zen’s position and being royalty is ever present, and lest you had forgotten, the series is quick to remind us in this last episode before the break too. The big event of this episode is “Open Castle Day”. Open Castle Day happens once every few years, and allows the general public into a part of the castle to be entertaining and enjoy a kind of festival/fair. Before we get into the nitty gritty of what this all meant for our beloved couple, I will say that the festival itself was beautifully “designed”… errr.. imagined and brought to life in the show. If a Renaissance fair and a Japanese Summer Festival had a love child, I think then you’d get what we got to see today. And man, it looked cool and great to see. 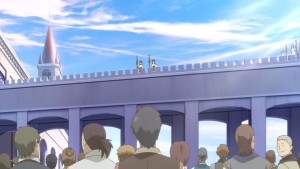 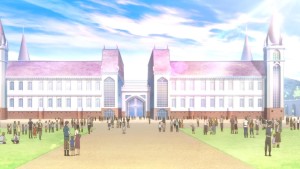 Of course, given the nature of what we had going on, of course Zen and Shirayuki were going to take some time from their busy schedules and enjoy the festivities together. Its nice to see the generally comfortable youngsters fumble a bit, as they get used to being more intimate with one another. For all the confidence that they have, both in themselves and in each other, its realistic to see some level of shyness and inexperience trickled in there as well.

A lot of what this week felt like, more so even than being a sort of closing chapter on the “courtship” part of the story, was that it felt like a preparation and a hopeful look to the future. Zen and Shirayuki have decided to seek a future in Clariness together, one that includes their three friends Obi, Kiki and Mitsuhide. In the case of those three, they’re very much there as friends and as vital support that will eventually lend themselves to the creation of that future. Its nice to see team “Zenayuki” (can we call it that?) form here, even if its unofficially existed for a while. 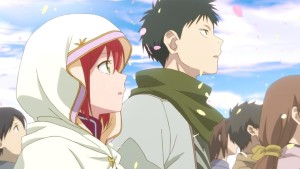 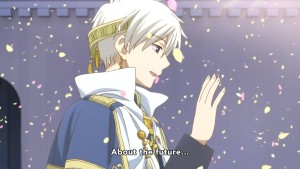 And as I mentioned before, the challenges for this to happen are still numerous. Shirayuki’s hair is still something that has her very largely stand out, and more importantly, point out how foreign she is. Then there’s Izana, who clearly won’t be a fan of the idea. Even looking at the hopeful and very confident nature of this episode, its clear to see that the future will be rife with challenges as much as happy moments.

It also feels like we’re actually going past this point of no return. Things are markedly going to be different because Zen and Shirayuki are past the point where they need to prove themselves. The first cour of this story has more or less been about Zen and Shirayuki proving their worth to the audience. We know they’re awesome, we know they belong together, so now the question is, how they do it. Can an interesting story, one that’s as good as what we saw here in this first cour emerge? 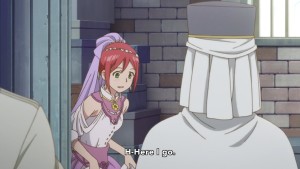 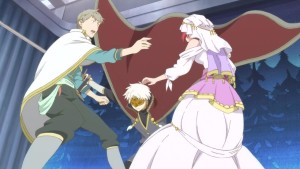 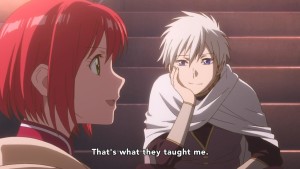 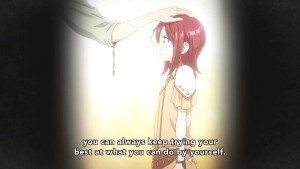 Perhaps. It’ll be a different kind of story though, but given what we’ve seen so far, there’s no part to be worried about. If nothing else, the B-Plots of the episode did something to reaffirm that. The whole stage play aspect of the story showed us that there is an interesting story to be had with Zen and Shirayuki very much into each other, and overcoming challenges together. There’s a sense of tension and thrill when Shirayuki seems like she’ll end up drawing too much attention, or when Zen rushes onto the stage in disguise to protect her as her “knight”.

One of the other things of note that emerges through the many small conversations the two main characters have with one another though, is Shirayuki’s grandparents. I’ve never quite thought about it, but I realize that both Zen and Shirayuki don’t really have parents in this story, something that’s both really odd and kind of tragic. There’s no mention of how either lost their parents, and how that shaped them as people. Given that we did get a mention of Shirayuki’s grandparents though, I assume that their childhood (or what little of what there is given that they’re both teenagers) will play a much larger role in the story. Its interesting to note that All of the show’s primary characters are without parents, and that’s something that at least feels very intentional, and in some ways links Zen, Shirayuki, Kiki, Mitshuide, Izana and Obi together I’d say. 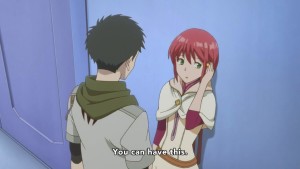 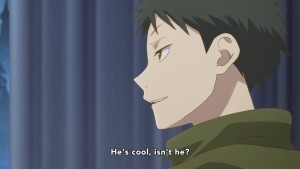 Speaking of which, there’s also the deal with Obi. Man, It seems like that’s become a running theme now in these posts, where I’ll mention Obi as his own separate thing. This week did nothing to quell my fears and discomfort for how his feelings play into the whole picture. Obi ends up winning a martial arts contest and puts on a nice earring on Shirayuki, telling her to show it to Zen later. And Zen does see it, and while he mentions that its frustrating, he says it looks good on her. I’m not exactly sure what to make of all this, only that it feels like all three characters are walking a very fine line here.

Obi shouldn’t be giving Shirayuki presents, especially given his “feelings”. I know his intentions aren’t all that dangerous, and if nothing else, there’s clear signs of respect, admiration and support for Zen. But the whole sequence still comes off as feeling uneasy. It doesn’t feel like that particular element is even necessary to the story, because I much rather have Obi teasing Zen and supporting the young couple as he does for most of the episode. I’m willing to bet that there is some larger purpose to this whole thing, as the show continues to highlight it, even as it bookends the first chapter of the larger story. 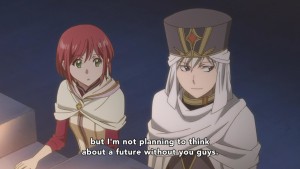 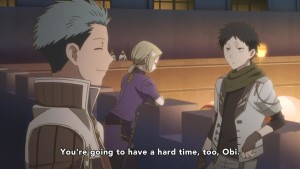 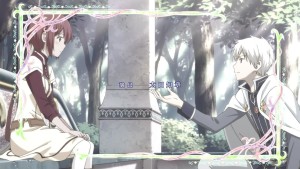 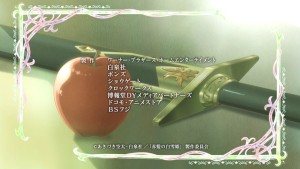 All in all, I will say that as a closing episode to part one, this episode felt really great. It’ll be sad not seeing this show, its world and characters for a few months, but it ended at a very appropriate point in the story. This was an episode that could’ve easily been the series finale, and I think its worth noting how differently we’d feel if it had been. I think I’d have been crestfallen for sure, but I’d also have sprung to read the manga and see where the story goes from here. The fact that we’re going to get another 12 episodes in a few months though, has me waiting on that as I do think that the story won’t complete in just 24 episodes.

In any case, I’d say its been a great, relaxing and calming ride through the introduction of Shirayuki and Zen and the world of Akagami no Shirayuki-hime. I really enjoyed watching and writing about this first cour, and hope to see everyone when the second cour comes along, in the Winter!