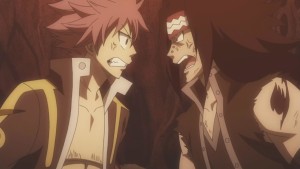 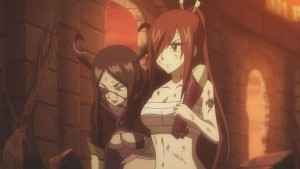 Well now… It seems even Fairy Tail isn’t above uttering that overused and hilarious phrase now, is it? I think the words that Silver utters to Gray have forever been ruined, thanks in so small part to a certain popular Sci-fi Film franchise. Now… I’ll be honest, while I didn’t see the whole Silver twist coming until halfway through this episode, I did guess what was going on before it actually was revealed. Was it a surprise? A shock? No, no it wasn’t. Was it still a good reveal though? Yes, yes it was. 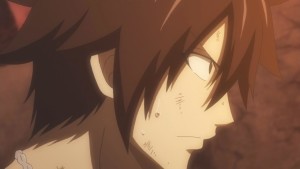 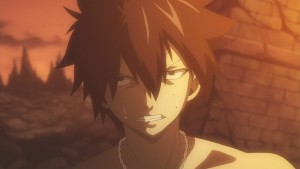 Gray’s been on a bit of an upswing as of late. After long being relegated to a b-tier character, and frankly disappointing quite often, it seems like Gray’s had a sort of second coming. Whether it was the Sun Arc, or whether it’s what we saw here, Gray’s kind of really important these days. As someone who’s both a fan of the character, and a fan of the Juvia x Gray pairing, I couldn’t be happier.

The headline this week, is definitely the reveal that Silver is actually Deliora using Gray’s father’s body. As Silver Fullbuster, Deliora’s returned, and I think for Gray, his ultimate nemesis and foe is right before him. Its interesting how Mashima-sensei brought Deliora back for Gray to tackle now, because I think we’ve gotten a very powerful Gray Centric arc with Deliora at its center. 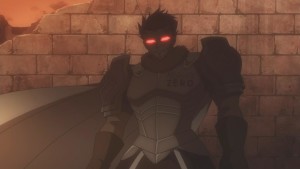 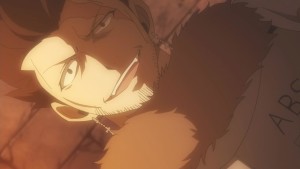 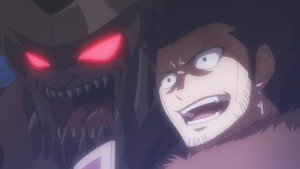 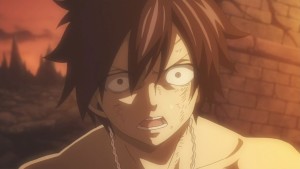 The reason I never considered the possibility of Deliora being Silver was simply because like Gray, I thought that story was over with. It makes sense, however, that thanks to Tartaros’s Hell’s core, they were able to revive Deliora once he was unsealed in the Moon Drip arc. Now before someone mentions that I didn’t notice Deliora in the OP, I will mention that Silver is only for a split second, and you really have to be looking for Deliora’s image in the purple aura behind him to notice. Its actually kind of brilliant, as there’s a decent possibility to miss the whole Deliora thing completely. After rewatching the OP post this week’s episode I saw it, but I was looking for said hints. All in all, I’m glad my eye didn’t catch it the first time.

But! Lets get back to Deliora’s actual revival. In a sense, Lyon’s little plot back then actually worked, even if he grew to learn and know better since then. He did end up reviving Deliora and unsealing it/him. You’ve got to hand it to Ul too. I’m not sure how much she knew about Deliora and Tartaros, but sealing it was indeed the only way to actually kill it. Even more so, it seems Deliora is a demon that has control over the ice, a worst case match up against Ul or even Gray. I’m not sure how powerful Ul really was (we’ve never quite been able to measure that), but… It did take all she had to seal Deliora, and she sacrificed herself in the process. 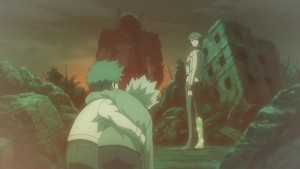 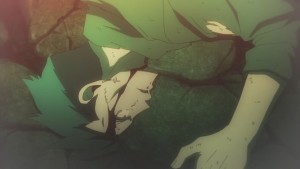 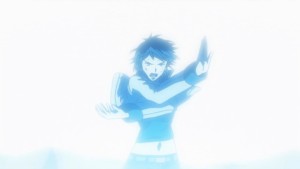 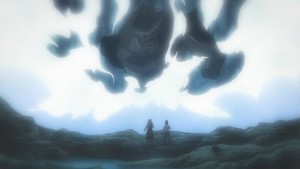 So that’s all well and good. Deliora was revived via Hell’s Core, and came back after the seal was undone. What doesn’t quite make sense, is how he ended up adopting Silver Fullbuster’s body when he revived. As we’re well aware, Deliora was defeated by Ul AFTER he killed Gray’s family and home, and was then sealed for 10 years. How then, did Deliora end up using Silver Fullbuster’s corpse a full ten years later? That’s the one bit in this scenario that doesn’t quite add up.

Was Gray’s dad and therefore Gray always an Ice Mage? Is that why the body was able to whether decomposition? That’s the only real explanation I can think of, and I’d call that a stretch. I wonder if Mashima-sensei plans to answer this one logistical question, or whether its just going to swept under the rug, much like Natsu’s recent wardrobe change XD 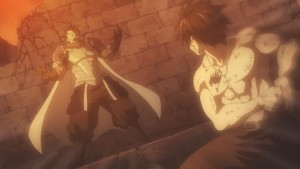 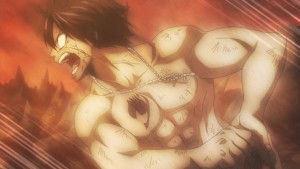 Regardless, Gray’s in the position for his ultimate challenge, and I’m sure the rage has him boiling. Not only is the being that took everything right in front of him, but he’s using his dead father’s corpse. The more important question, however, is whether Gray can actually rise to the challenge. Gray’s gotten better sure, but can he take down THE Deliora? Does he even stand a ghost of a chance? Or will he have to sacrifice himself much like his mentor?

Tartaros’s Necromancer Keyes definitely seems to think so. We’ll find out next week I guess, because before we got the fateful Gray/Silver exchange, we unfortunately also got quite a few scenes of the rest of the characters continuing their own conflicts. 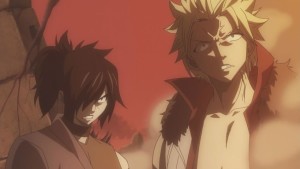 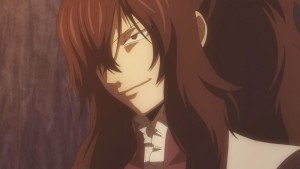 Sting and Rogue end up taking on Mard Geer, and at the very least allow Erza and Minerva to flew to the control room to stop Face. Natsu, Gajeel and Juvia continue to struggle against their opponents. Minerva continues moping, and continues to see kindness that she quite frankly still doesn’t deserve. Franmalth also gets found out, and its actually Minerva that ends up doing it.

I won’t say the aforementioned scenes were boring, but I honestly didn’t find that altogether inticing either. It felt very much like nothing of note really happened, and it really was just the show checking in with everyone to make sure we understood that yes, everyone else is busy doing SOMETHING. I’m more or less completely in favor of completely ignoring everyone except Gray until his segment is done. I know that the show’s done it before, and my mind wanders back to how we got an entire half episode of Erza vs Midnight ages ago in the first series. It worked there, and it would arguably work here. 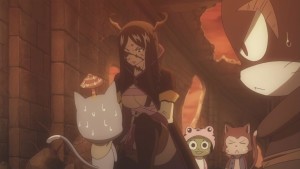 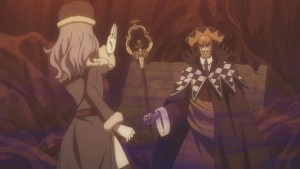 I’m sure the Anime has to pad things out to a decent amount. For one thing, I’m not even sure if we’re going to get the next arc animated, so it could very well be that the anime only lasts till the Tartaros arc (God I hope not!). Regardless of what happens though, I will say that I’m surprised by how many times this arc can reemphasize a sense of engagement. First it was Laxus, then Wendy, then Lucy and now Gray. Each of these characters have had stellar moments and situations to shine.

Gray’s particular situation is pretty central to the character’s core too, so it’ll be interesting to see how he deals with it, and whether he makes it out alive or not. 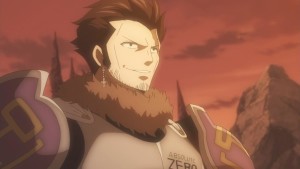 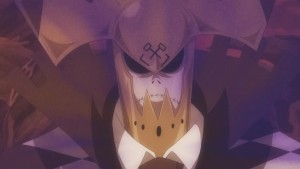 Gray vs Silver, for real this time. Here’s to seeing how this all shakes down, next week!