I think the phrase “under the radar” describes this series perfectly for me – barely anyone seems to know about, let alone talk about it, on several online anime discussion places, whether blogs or forums or otherwise. In retrospect it is understandable. First of all it is a “shorts” series. Each episode is two minutes long. Second of all there is very little that really “happens”. The anime adaptation is based on a manga, and is about Murasaki Wakako, who is 26 years old, who loves going out alone to enjoy eating and drinking, especially when something unpleasant happens at work. The series follows Wakako through many solitary outings, where she enjoys different combinations of food and drink. In a way she is a sort of “amateur food critic/gourmet”. 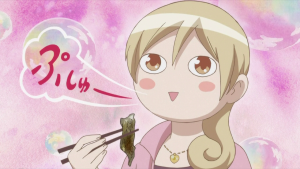 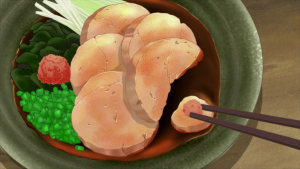 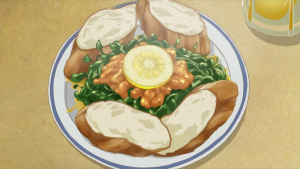 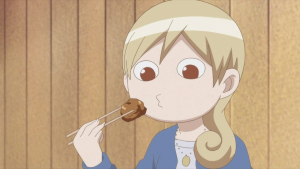 I think one of the best things about this series is how it both introduces and scratches the surface of a side of Japanese thinking and approaching food that is very specific and methodical, yes, but even that touches on something that is very characteristic of traditional cultural aesthetic values in Japan – there is not only a right way to prepare food, but to eat food, and to evaluate, criticise and appreciate what is placed in front of one. Whether or no one agrees with the standard is another thing, but the mere fact of a standard existing and reflecting a larger, all-encompassing set of consciously sought out and thought out ideals that manifest themselves in specific ways of thinking and feeling is very interesting – for me at least. On a larger level this actually extends in many aspects of the other arts as well – gardening, painting, writing, the famous “tea ceremony” (which was regarded as a mirror of our existence in this life), and even one’s deportment and way of interacting with others … it is all encompassing and has many defaults that have some good qualities that are worth paying attention to. 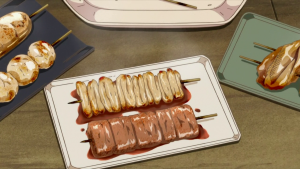 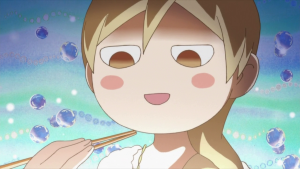 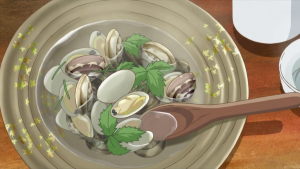 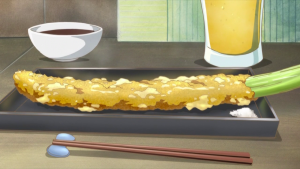 It would be presumptuous to try and come to the anime looking for things specifically like that, though. This little series only barely grazes the surface of that. Yet there is another aspect of the series that really works for me, and that is the personality of the main character. Yes, she is a amateur gourmet of sorts, and yes, she is often alone as she is goes off in search for places to eat the “perfect combination of food and drink” after work. But beneath it all one is surprised to see a tiny image of searching for ideal beauty, which in turn reflects a part of her feeling that she does not fully “belong” in this life, somehow … or perhaps this era? One of the proofs of this is this odd little manga’s incredible popularity in Japan – it really speaks to an aspect of the her people there in a quiet, almost humble and inobtrusive way easy to miss, easy to get crowded out by the noise and bustle and disturbance of the daily life especially in urban areas. 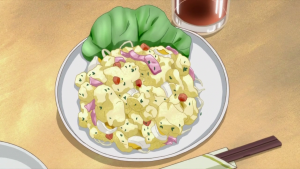 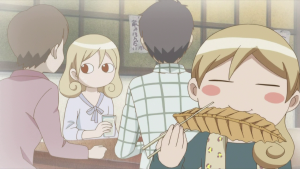 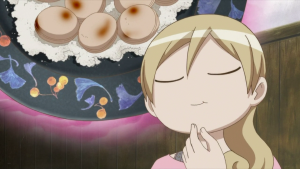 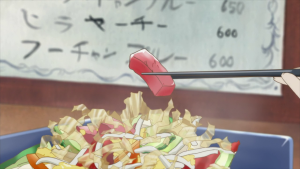 This little series is definitely not for everyone, and even if it does sound like your cup of tea it’s “meaning” may be hard to hear, but even if you are able to pick up the faintest, far-off sound of the “note” it is giving off, like a tuning fork, perhaps you may also find yourself equally taken by the series as I was, or, I would hope, perhaps even more moved. Do give this little series (and the manga source – I believe there are five chapters available or so?) a try if you are interested. You just may discover a hidden gem. ^^